Kenya Elections 2017: A Massive Fraud by the Genius of Evil, With International Participation 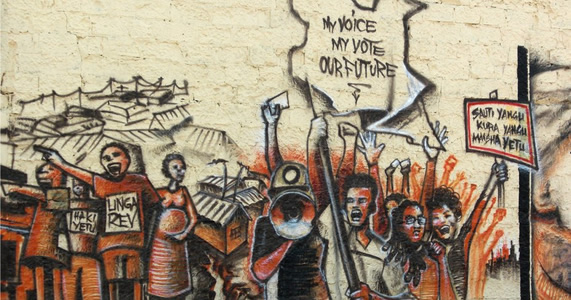 Never in my life, did I imagine that in the name of democracy, a massive fraud would be committed against the Kenyan people with the participation of the international community. The Kenyatta oligarchy, having bought the complicity of the international community through inviting them to buy into the privatization of our schools and hospitals, turned against the Kenyan people and made international players like UNDP, John Kerry and the Carter Center cheer them along. Never has the victory of racism been so complete in Kenya. It has made the world expect so little of Africans that they do not care whether the freedom we have is genuine, or whether the elections are fairly done.
I trace the build up to international complicity in this massive fraud to 2015, when the governments of France, Netherlands and Norway, together with the Gates Foundation, plotted with the Government of Kenya to collapse public healthcare by denying public hospitals of staff, and making their working conditions so unbearable, that the private hospitals could harvest medical workers that had been trained by taxpayers. The private hospitals, in turn, received massive investments from European countries whose citizens would never have accepted such a defrauding of the people. From then on, it became impossible for the international community to really critique what the Kenyatta oligarchy was doing to Kenya.

The collapse of public healthcare was a harvest for private insurance. Bliss Pharmaceuticals, through AON Kenya that is reputed to have top politicians among its shareholders, received a KES 11bn contract to provide healthcare for government paid teachers and police officers. Meanwhile, NHIF – the health fund that is compulsory for Kenyan employees – was paying record amounts of money to private hospitals. As billboards for political campaigns went up around Nairobi, so did the billboards of insurance companies. To add insult to injury, the fast rising billionaire Peter Nduati rubbed salt in our wounds by gloating that Raila could not be president because he could not govern a majority Jubilee government. According to him, Kenya needs to get on with business.

The so-called victory of Jubilee is a victory of private business, and in the next few years, Kenyans should expect the collapse of public institutions and an increase in militarization to keep the people of Kenya in perpetual fear.

Peacemongering and violence in the national and international media

The stage was set for the Uhuru usurpation by a blitz of local and international media articles that prepared Kenya for an inevitable Uhuru victory based on the tribal numbers. Local and international media published data that said that Kenyans never choose their presidential candidate for a reason other than tribe, essentially saying that all Kikuyus would vote for Uhuru and he would win because they were the largest ethnic group. To make this purported inevitability acceptable, local businesses and the UN, with the voices of prominent media personalities, fueled a parallel message that Kenyans must keep the peace.

But as we all know, numbers do lie. Like Cathy O’Neil reminds us in Weapons of Math Destruction, numbers reflect the social biases of those who generate them. In the Kenyan case, it should be fairly obvious by now that Kenyans who live in metropolitan areas, who are in inter-ethnic families and who have a certain level of education are likely to choose presidential candidates on reasons other than tribe. However, these factors are never accounted for in research. Even locally, the polls would have kept on feeding us with the inevitability of an Uhuru win, until NASA chose to carry out their own poll. It was only then that the local media conceded that polls are not gospel truth.

The other local driver of the inevitable Uhuru win based on numbers has been the ideologies of the tyranny of numbers and of Uthamakism. As Mutemi wa Kiama explains, these ideologies stem from a concerted effort to exploit Kenya without the possibility of an uprising, since Kenyans would feel Uhuru has already won on the strength of ethnic numbers.

One must also add that the Kenyan media did not invest enough in analyzing the issues that Kenyans should have voted. The much hyped presidential debate ended up being a series of sound bytes from the lesser known candidates and an interview of Raila Odinga, because Uhuru Kenyatta refused to attend the debate. Before that, the media barely discussed the party manifestos, and attempts of Anne Kiguta and Yvonne Okwara to interview David Ndii on the NASA manifesto literally collapsed. In the case of Anne Kiguta, she had clearly not read the manifesto, and it didn’t help when Ndii asked her if she had read the Constitution as well.

For as long as we do not provide opportunities for Kenyans to discuss politics on any other basis, the tribalism influencing the elections is a self fulfilling prophecy . I did try my best to provide an alternative narrative with doing a review of the manifestos with the hashtag #ManifestosKE on facebook, but they were much too little and very much late. But more than that, an interesting discovery I made was that actually, the manifestos barely delved into the social issues besides employment and health, and health could have been largely a product of the doctors’ strike that sparked a serious public awareness on public healthcare. Indeed, I concluded, Kenyans still define politics almost solely from a business perspective.

Essentially, the point here is to say that if ALL Kenyans did vote on tribe alone, which I find difficult to believe is universally applicable, it is because we were set up to vote on nothing else. And that paradigm has a distinct political advantage for Jubilee or any other Kikuyu-centric political party: it sets up Kenyans to believe that a Kikuyu presidency is inevitable. And democratic.

It is on this point that the peace message becomes necessary. Where numbers do not work, the Kenyan people are fed with an ideology that equates peace with accepting Uhuru as president, and equates questioning the Uhuru regime with violence. Sparked off by the glamorous Julie Gichuru, a darling with global capital who has done moderation gigs at Davos, the peace narrative shook the Kenyan population and distracted intellectuals into addressing the problems with the peace narrative. A few days before Julie Gichuru released the controversial video, I was part of a group of bloggers who were called to the US Embassy to find out how we can push the peace narrative, and other forums were organized by foreign embassies and NGOs to lobby for the same as well.

The peace narrative got another spooky boost from the Kenya Private Sector Alliance that sponsored a video advert in which the post-election violence victims arise from coffins as zombies and urge people, ironically, to shun inciters and instead choose peace. Essentially, the ad said, the people to blame for 2007-8 violence were not those who organizing the violence, but ordinary Kenyans who accepted to be organized to commit violence. The twisted logic of the ad has made a number of us call on KEPSA to withdraw the ad because it is a form of psychological violence, but the calls have fallen on deaf ears.

Meanwhile, Safaricom – Kenya’s largest firm – kept off the word “peace” but numbed us with videos of a diversity of Kenyan celebrities going over the great virtues of Kenya. Another peace message that told us “the law works for us,” and that the courts were the only option for addressing electoral disputes, was sponsored by Uwiano initiative, which brought together UNDP and various organs of the government.

Essentially, Kenyans were coerced into accepting the dichotomy of peace and justice, and the branding of anyone who raises questions as advocates of violence. It is simply stupid for the international community to expect that a vote carried out among a people so beaten down with psychological manipulation can be genuinely called credible. The only reason that such a message becomes acceptable is because of a deeply racist belief that Africans cannot think, and only act on instinct.

Yesterday, it was mind blowing as watching successive groups of international observers praising the election process. Speaking from Radisson Blu, one of the upscale hotels of Nairobi, international observers, which included the European Union and the Carter Center, all restricted their observations to the long queues and the counting of votes, when the rigging was done before and after the actual casting and counting of ballots. And to supposedly capture the quaint Kenyan flavor of the process, they all joked about election ink being put on babies to prevent different women from using the same baby to jump the queue to vote.

The more explicit positions were inherent in their platitudes about Kenya being more than elections, and about accepting the result. But as former US Secretary of State John Kerry inadvertently revealed, this was a message that they gave to Raila Odinga but not to Uhuru Kenyatta. The stage managed press-conferences conveniently avoided the pertinent questions about the credibility of the tallies and their posting on the IEBC portal. They were very quiet and polite, but when NASA gave its presser later, the press literally shouted at Musalia Mudavadi. The contrast between the press conferences is a lesson in the anti-African bias of the media.

I also found it amusing to hear the EU and Carter Center observers say that the independence of the judiciary was a concern of “both” the main political parties. They essentially walked into Jubilee’s trap, which I flagged many weeks ago when I said that Jubilee’s criticism of the judiciary was a performance meant to fool the international community that Jubilee did not have home advantage in this election. Anyone with a decent knowledge of history could see that coming, except that the Kenyatta family has successfully alienated history from the school curriculum, and with the horror of a new education system it wants to impose on Kenya, our collective ignorance will only get worse.

Why Africans must care

Essentially, what will now be praised as a “peaceful” election was the connivance of international racist global capital against the Kenyan people. The praises of Kenya being an icon in the African continent are all lies meant to make Africans accept Eurocentric dominance as the model for freedom. But worse, the narrative of this Kenyan democratic monster has been constructed on a Euro-centric, racist ideology that does not believe that Africans are capable, or even worth, a genuine nation that does not marginalize the majority to line the pockets of a minority. The international community did not have time to waste on understanding the complexity of African life, African thought and how we interact with institutions. It has better things to do, like attending cocktails and ranting about Donald Trump.

Meanwhile, the international community has left Kenya with a festering wound, a people groaning under the yoke of indignity and madharau, with few prospects of a national reconciliation that rights the injustices of the past and the present. And if, God forbid, the situation explodes, the same international community will feed us platitudes about peace in a situation whose deterioration it supported and celebrated.