Unhistories – Kenya’s Mau Mau: A Walk Through the Archives 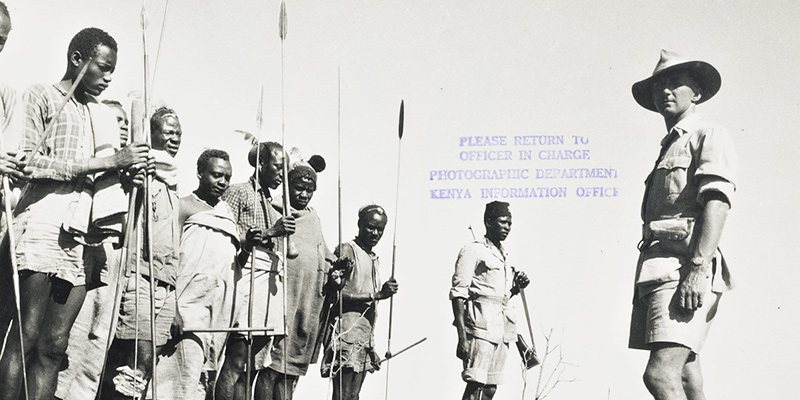 In 2014, Belgian documentary artist Max Pinckers was invited to the Archive of Modern Conflict in London, where he came across a collection of British propaganda material relating to the 1950s “Mau Mau Emergency Crisis” in Kenya. Since then he has been working with various Mau Mau War Veterans Associations in Kenya, with a particular focus on using photography to (re-)visualize the fight for independence from their personal perspectives. This includes mass graves, former detention camp buildings, locations of former mobile gallows, cave hideouts, oral witness testimonies, portraits and demonstrations of personal experiences.

This ongoing documentary project titled Unhistories departs from the Hanslope Disclosure in which British colonial archives were destroyed, hidden and manipulated. Known as Operation Legacy in the 1950s, the British colonial administration in Kenya destroyed much of the documentation relating to the Emergency prior to their departure in 1963. Unhistories is a collaboration with Mau Mau veterans, Kenyans who survived the colonial violence, historians, artists, activists, writers, archives, universities and museums.

Part I of this series covers a walk through archival material, vaults and the burning of incriminating materials by the British government, as well as interviews and demonstrations by Mau Mau veterans.

Here stood one of the largest Mũgumo trees in the country, with a diameter of about four and a half meters. The Kikuyu sage Mũgo (Chêgê wa Kĩbirũ) prophesied that the fall of this giant fig tree would mark the end of British colonial rule in Kenya. In 1946, while it was a place of worship for the Kikuyu community, the British assigned 24-hour security around the tree and decided to fortify with metal bars and a circular iron ring filled with soil to prevent it from falling.

Shortly before Kenya became independent in 1963, the tree was struck by lightning, split into two parts and withered away. The circular reinforcement still remains today, with a new tree now growing out of it.

British propaganda material from the 1950s about “Mau Mau” in the folder A 5072 at the Archive of Modern Conflict, London, UK, 2020.
Her Majesty’s Government Communications Centre, Hanslope Park, Milton Keynes, UK, 2021.

In 2011, during the negotiations for compensation of Kenyan victims of abuse, the unrelenting efforts of lawyers and expert witnesses led to the discovery and release of thousands of secret files held by the Foreign and Commonwealth Office (FCO) at the a highly-secured government facility Hanslope Park. The FCO was forced to reveal the existence of some 1,500 government files secretly removed from Kenya on the eve of independence, a process known as “Operation Legacy.” They provided many unseen documents which described in detail the systemic torture of detainees during the emergency, and the knowledge of those abuses by British Government officials in London and Nairobi. These “Migrated Archives” are just a small part of a much larger collection of documents that were either destroyed or have disappeared. The FCO subsequently announced that it held files from all 37 former colonies, a collection of about 20,000 items.

“(a) Might embarrass H.M.G. [Her Majesty’s Government] or other Governments;
(b) Might embarrass members of the police, military forces, public servants or others (such as police agents or informers);
(c) Might compromise sources of intelligence;
(d) Might be used unethically by Ministers in the successor Government.”

— Protection and Disposal of Classified and Accountable Documents and Records Generally, TNA FCO 141/6970, 1961-63

A burning pile of documents that were found in a stock in the Nyeri County Archives in Kenya. These were duplicates of colonial-era documents held at the Nairobi National Archive, 2015.

“It is permissible, as an alternative to destruction by fire, for documents to be packed in weighted crates and dumped in very deep and current-free water at maximum practicable distance from the coast.”
— Disposal of Classified Records and Acceptable Documents, TNA FCO 141-6957, 1961

Members of the Mau Mau War Veterans Association, Murang’a Branch, studying British archival photographs from the 1950s, Murang’a, 2019.
The Invigilation Room at The National Archives in Kew, where many of the photographic documents from the Migrated Archives (FCO 141) are required to be viewed under supervision.
Maina Njathi with a kipande, Murang’a, 2019.

When the British came here they treated us like animals. They abused us saying that we Africans are domesticated gibbons and mannequins, that we have all the characteristics of human beings but suffer from academic inferiority. They expelled us from our shambas, our lands, and they settled.

They said we have no capacity of carrying our documents. So they made boxes, they called them “identity box” (kipande), which they told us to hang by our neck. They said we have no pockets or money, so they made coins with holes in them, with a string through them, to tie around our necks. They did the same with dogs. Dogs had their identity tied to their necks. And we Africans, we had our identity tied to our necks. The British were overpowering, pressing and dictating, and ruling very rudely. They took our lands by force, our property, our houses, they took everything and they ruled us very dictatorially until we said that enough is enough. Then we fought for our independence. We didn’t get the reward or compensation to wipe our tears for the land we are fighting for, we still haven’t gotten any.

Our government forgot about us freedom fighters. That is why you see us very thin and poor, living a life that does not fit people like us. I don’t know what we can do for this to reach our president. But I hope that he may remember us before we die.

Esther Gachigi Riitho demonstrates how, as a child, she would be on the lookout for approaching British troops. Children would pretend to play with fruits while being scouts, passing them on to each other with a message in order to warn Mau Mau fighters if the enemy was coming. Gatung’ang’a, Kahira-ini, Nyeri County, Kenya, 2015.
Muchai, Karigo. Life Histories from the Revolution Kenya: Mau Mau #1, The Hardcore. Richmond: LSM Press, 1973.
Eliud Mwai Munyiri and Charles Ngaragari Karuitha demonstrate an oathing ceremony, Kahuru Gatei, Nyeri County, Kenya, 2015.
TNA, CO 1066/16. The National Archives, Kew, UK.

Foreign Secretary William Hague’s statement to Parliament on the settlement of claims to Kenyan citizens relating to events during the period 1952-63.  House of Commons, London. Copyright. Channel 4 News