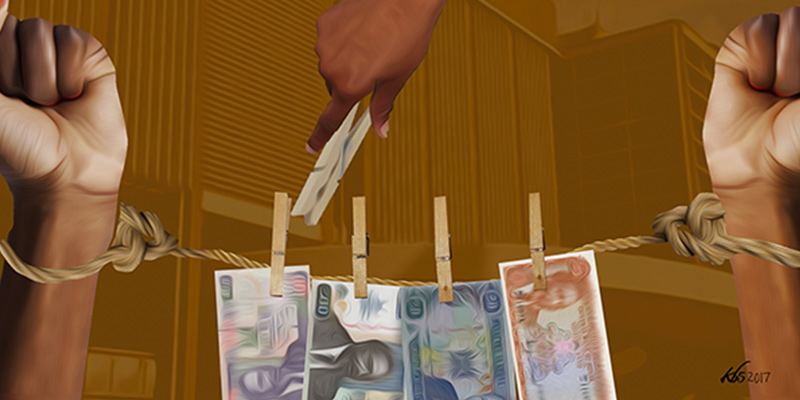 Over the few years that I have been working on this subject, one question keeps coming up repeatedly. “What are you really talking about with this tax justice business?” Depending on where one falls on the spectrum of insight in public finances—be it collection, allocation, expenditure, or sanctions in public finance management of revenues—tax justice can generally appear to have many meanings in varied contexts.

Is this issue all about just taxing rich people? Are tax havens the reason why the world is hurtling towards Armageddon? Why should you be interested in this issue anyway? The simple text book answer is that tax justice is a call for fair taxation and that wealthier people are singled out because their affluence enables them to find tax loopholes, using tools such as tax havens at the expense of their respective societies.

Yet it is only when you go into the real-world problems facing Africa and other developing countries that you understand how important this issue is. In a world that is suffering from inequality among other challenges, tax justice is one among many sharp tipped spears in the arsenal of fighting the various manifestations of disparity today.

Tax justice primarily focuses on revenue collection first, by determining how fair the process of mobilizing domestic resources is, before linking it to other aspects of the fiscal cycle, namely, distribution, spending and administration of national proceeds. Bearing in mind the aforementioned loopholes, the tax burden is increasingly being carried by the poor or the middle class, thereby enhancing the gap between them and the rich.

Essentially, it is assumed that if unfairness starts at the point of tax collection, then it is guaranteed that it will likely manifest again and again throughout other aspects of how public money is allocated, spent, or managed. This fundamentally erodes the social contract between an individual and their government because the provision of certain basic services is jeopardized despite the surrender of monies to the relevant authorities who are expected to deliver without fail.

For tax justice to truly work on behalf of the citizen, it must be founded on the principles of human rights. This demands that the financial architecture and fiscal systems in place allow for: citizen participation in decision making; accountability of systems; non-discrimination in implementation of programmes; empowering processes that enhance social mobility; requisite sanction in the face of transgressions; and legitimacy through applying the rule of law.

By entrenching these tenets, then, the true benefits of taxation can begin to follow in the form of: revenues to fund public services, infrastructure development, and ensure the proper administration of initiatives; resources for redistribution to curb inequalities between individuals or between groups; and repricing of certain goods or activities to limit public “bads” such as tobacco use, over-consumption of alcohol, addiction to betting, or carbon emissions to mitigate the negative consequences.

More importantly, fair taxation enables true representation in the purest sense of how democracy establishes a healthier governance system in relation to access to public goods. Also, by using fiscal policy, tax can be used to reorganize an economy if the need arises, for instance in the case of the COVID-19 pandemic.

So, what is the problem with taxes? When this question is put to Kenyans, most believe the government cannot meet its revenue targets because some of their fellow citizens avoid paying taxes. Despite the patriotic fervour demonstrated in the call to achieve self-sufficiency through the payment of taxes, they see a wide gap between the high levels of taxation and the poor services provided by government ministries, departments, and agencies.

Drawing from local grievances, what emerges in Kenya, East Africa, and the continent, is that the reality of public finances is a magendo (black market) experience that is in opposition to the lofty aspirations of achieving domestic revenue mobilization. Various forms of malfeasance—resulting from corruption, the proceeds of crime, or the aggressive manipulation of tax systems—consistently colour public finance management at the expense of citizens.

Such insidiousness results in the loss of revenues within and beyond the borders of countries. However, away from illegal financial transfers that contravene national or international laws, there are the immoral aspects of loss of revenues legally through tax avoidance. Many companies—multinationals in particular—aggressively look for tax loopholes in order to minimize the tax payable using such legal means, eroding a government’s capacity to fulfil its obligations to its citizens.

One obviously has a right to minimize their taxes as much as possible but what does it gain the society in which they operate if the government receives much less (or in some instances zero) tax? How will public hospitals get medical supplies? How will public schools have their classrooms built? And how will the public roads to these institutions be constructed if the government is denied its fair share of revenues by actions that can at best be termed dishonest? Unfortunately, this sin has created an alternate reality where, even though it is obvious that tax avoidance is detrimental to a country’s efforts to raise revenues, it is not clear whether the actions by which this is happening are outright fraud. And it is these shades of grey that confuse the public and eventually annoy them.

Even though discussions on such issues as trade mispricing, transfer pricing abuse, double taxation agreements, international financial centres, global minimum corporate tax, beneficial ownership, open contracting, unexplained wealth, asset recovery, among others, may be beyond the understanding of the common man or woman, they cannot help noticing and complaining about the fact that much of the tax collected is simply used to repay debt, diminishing the resources available for development.

Even though it is obvious that tax avoidance is detrimental to a country’s efforts to raise revenues, it is not clear whether the actions by which this is happening are outright fraud.

So even if one does not really understand the business models at play, it immediately becomes surprising that SportPesa could sponsor English football teams unlike other large taxpayers such as Safaricom or the East African Breweries Limited (EABL) which have been around for much longer. For all the claims of Kenya being a Silicon Savannah, one wonders why SportPesa had to pay proprietary fees to its UK affiliate company for the software used by punters in Kenya. Was there no one who could develop similar software here? If properly taxed, how much of that money could have gone into settling the national debt or providing services for Kenyans? Not to mention that it was clearly offensive when at one point SportPesa threatened to relocate to Tanzania if its tax concerns were not addressed. It is no wonder that President Uhuru Kenyatta was incensed on spotting a Formula 1 team sponsored by SportPesa (which had ignored his insistence that the company pay its tax arrears) at the Singapore Grand Prix 2019.

Yet, paradoxically, it would later be revealed in The Pandora Papers that the president and six members of his family “secretly owned a network of offshore companies for decades. . .” If the leadership reflects who Kenyans are as a people, then he is not alone. Kenya’s former Deputy Chief Justice Kalpana Rawal was mentioned in the Panama Papers. Who knows who else is caught up in the offshore wealth business? It is no surprise that the president is yet to give a comprehensive response on the Pandora Papers as he promised.

Meanwhile, an enabling ecosystem that will further facilitate illegal financial flows out of Kenya seems to be taking shape. For one, lawyers are fighting the implementation of section 2 (c)(i) and section 14 (b) of the Proceeds of Crime and Anti-Money Laundering (Amendment) Act 2021 that requires them to report their client’s financial transactions.

Moreover, before it was challenged by the Tax Justice Network Africa (TJNA), the government was signing double taxation agreements (DTAs) left and right with little parliamentary oversight despite constitutional thresholds. Then there is the opacity surrounding the setting up of the Nairobi International Financial Centre (NIFC).

An enabling ecosystem that will further facilitate illegal financial flows out of Kenya seems to be taking shape.

Mauritius keeps coming up as a favourable destination for Kenyan companies wishing to reduce their revenue bills. Household names like Naivas, Quick Mart, Tuskys, and Nakumatt all seem to have found a tax haven on the island. Centum was quick to adapt its strategy to reap from the Kenya-Mauritius DTA and is reported to have sought the incorporation of subsidiaries, namely, Centum Development and Centum Exotics. This makes the common man and woman wonder why there seems to be a separate system of taxation for the rich and powerful whereas they can’t catch a break from aggressive tax agents who are nowadays backed up by police officers.

A new citizenry is the answer

Kenya’s constitutional journey set a foundation of rights. Yet the construction of a great republic is not complete until its citizens figure out how to wall and roof their democracy by having a conversation about responsibilities. This requires civic education which was somewhat abandoned in favour of capacity building programming that was all the rage in anticipation of the heavy demands of implementing the new supreme law.

The construction of a great republic is not complete until its citizens figure out how to wall and roof their democracy by having a conversation about responsibilities.

Just like during the struggle for the Constitution of Kenya 2010, engaging the citizen is the next frontier for good governance, building a civil movement that will take individuals beyond the symptoms of the numerous existing problems they are familiar with, to an understanding of the root causes underlying their experiences. It will clarify the underlying patterns and lay bare the linkages between rights and responsibilities, and also create avenues to make claims once the authorities, the resources, and the decision makers are clearly identified and constantly engaged with to prioritize the necessary action.

Increasing the number of conscious individuals with an understanding of the importance, feasibility, and urgency of ensuring service delivery is the best guarantee of establishing a social contract that will address past injustices, current problems, and emerging threats using the resources available appropriately. Subsequently, if, as the saying goes, “Nothing can be said to be certain, except death and taxes”, then let the tears of grief caused by inequalities in revenue collection in East Africa, the continent, and the developing world be a thing of the past while one is yet alive.