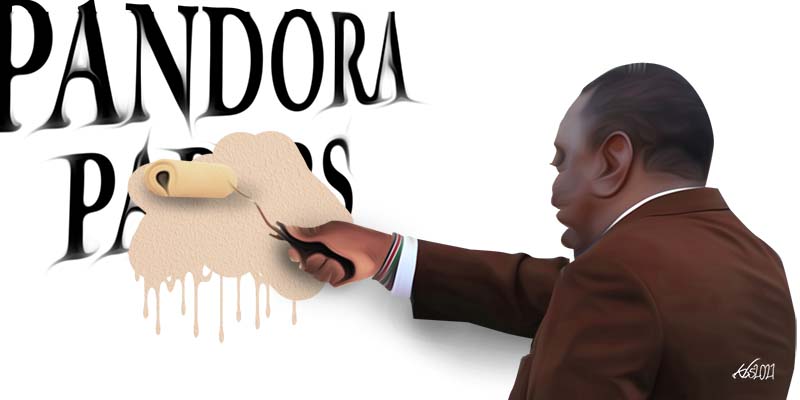 The publication of the Pandora Papers, a massive investigation into how world leaders and public officials use offshore tax havens to hide assets worth hundreds of millions of dollars, has caused a bit of a stir in Kenya. However, by and large, the reaction of the Kenyan media has served to shed more darkness on an already obscure subject.

Among those whose overseas financial arrangements have been exposed is the family of President Uhuru Kenyatta, whose father, Jomo Kenyatta, was Kenya’s first president. That the Kenyattas, and other political families, have been stashing massive sums of money abroad will come as no surprise to anyone with a passing knowledge of Kenya’s history. Easily the richest family in the land, there have long been complaints about how that wealth was (and continues to be) acquired and the revelations about where it is kept will simply add more fuel to the fire.

Even before he became president in 1964, Jomo Kenyatta was known for his problematic relationship with other people’s money. In his book Kenya: A History Since Independence, historian Charles Hornsby notes that as far back as 1947, people had noted Kenyatta’s “desire for money and difficulties in separating his personal financial affairs” from those of the institution he was running. These traits would attain their full expression during his 15-year rule and beyond.

Functionally broke when he entered State House, by his death in 1978, his family would boast, according to the US Central Intelligence Agency, “extensive holdings of farms, plantations, hotels, casinos and insurance, shipping and real estate companies,” with members of the family occupying major public office and influential posts in large foreign-owned industrial companies doing business in Kenya. The family would also be deeply involved in the ivory and charcoal trade that decimated Kenya’s elephants and forests, as well as in smuggling.

That the Kenyattas, and other political families, have been stashing massive sums of money abroad will come as no surprise to anyone with a passing knowledge of Kenya’s history.

Today, they have fingers in almost every pie in the Kenyan economy and the family has continued to exploit its privileged position to milk Kenyans. In 2017, one scholar described a partnership between the family’s bank and Kenya’s largest mobile service provider to offer mobile loans to adult Kenyans at extortionate rates as “the extraction of surplus on a national scale for the substantial benefit of one politically connected family.” Within the first 14 months of the arrangement, the bank was dispensing over 24,000 loans daily at an annualized interest rate of 90 per cent, and over 140,000 borrowers had been blacklisted by credit reference bureaus for defaulting on the loans.

Where does all the money extracted from poor Kenyans go? Kenyans got a clue in 2007 when Wikileaks, the whistleblowing website, leaked a report by Kroll, the international risk consultancy. In one of its first major scoops, the website released details of the 110-page investigation into the looting of Kenya during the regime of Daniel arap Moi – who succeeded Jomo Kenyatta in 1978 – that had been commissioned (and buried) by Moi’s successor and Uhuru Kenyatta’s predecessor, Mwai Kibaki.

The report revealed how Moi’s family had created “a web of shell companies, secret trusts and frontmen” to funnel over US$1.3 billion into nearly 30 countries including the UK. It is notable that the Pandora Papers leak has shown that the Mois and the Kenyattas shared the same consultants – from the private wealth division of the Swiss bank UBP – who helped them hide their money overseas.

Given the above, it is surprising that Kenyan media has opted to frame the release of the papers as an issue of legality rather than ethics. The repeated refrain is that there is no evidence the Kenyattas broke any laws, with short shrift given to questions about the advisability of allowing public officials who are paid to fix local problems to not only stash money abroad, boosting foreign economies, but, perhaps more importantly, to hide their ownership of it. When the Kenyattas and others who have relatively easy access to public money can effectively disguise what they own in a confusing, Matryoshka doll complex of foreign briefcase companies and foundations, how can the public ever trust that it is not being robbed? This is even more so the case given the ongoing attempts to extradite two former officials for laundering close to US$10 million in illicit bribes through the British tax haven of Jersey.

It is surprising that Kenyan media has opted to frame the release of the papers as an issue of legality rather than ethics.

The Pandora Papers come as Kenya is engaged in a discussion on wealth declaration laws prompted by the government’s public outing of the riches belonging to Kenyatta’s deputy, William Ruto – another politician linked to the massive looting enterprise that is the Kenyan government – after the two had a falling out. Kenyatta and his cronies have been trying to undercut Ruto’s bid to succeed him as president in next year’s elections by exposing the fallacy of Ruto’s cynical and populist attempt to paint himself as one with the common masses he is suspected of robbing.

Kenyan public officials and their immediate families are required by law to file wealth declaration forms every two years, but in a typically self-defeating move, the declarations are kept confidential with penalties of up to 5 years’ imprisonment for publishing or otherwise disseminating the information. It is thus unclear whether Kenyatta and other politicians have actually complied with the law and declared the assets they have hidden abroad.

The Pandora Papers also present an important opportunity to discuss the culpability of Western professionals, banks and jurisdictions in enabling the accumulation and camouflaging of illicit funds by public officials and their families. According to Tax Justice Network Africa, for every dollar of development aid that comes to the continent, ten dollars have left in the form of illicit financial flows, tax evasion and avoidance, as well as corruption. And much of this money ends up in Western economies – as both the Kroll report and the Pandora Papers have demonstrated.

“Tax havens play a facilitatory role in human rights abuse by providing an avenue for hiding and laundering money which has been . . . acquired under dubious circumstances” such as corruption, writes Robert Mwanyumba of the East Africa Tax and Governance Network. And it is the countries that shout the loudest about corruption that run and benefit from these havens. The British Virgin Islands, where the Kenyattas incorporated one of their shell companies, is part of what has been described as the “Spider’s Web”, which the Tax Justice Network describes as “a network of British territories and dependencies [where the UK government has full powers to impose or veto lawmaking] that operates as a global web of tax havens laundering and shifting money into and out of the City of London.”

The Pandora Papers come as Kenya is engaged in a discussion of wealth declaration laws prompted by the government’s public outing of the riches belonging to Kenyatta’s deputy, William Ruto.

In fact, according to the Financial Secrecy index 2020, two-thirds of the top 12 most important financial secrecy jurisdictions are either in the US, Western Europe or British Overseas Territories. When treated as a single entity, the UK and its web rank at the very top of this index of abettors of theft and corruption.

The reporting by Kenyan media, therefore, does Kenya and Kenyans a great disservice. By focusing on the legalities and ignoring the ethics, it strips the issue of its potency as a driver of change and allows politicians to detract from what is important. Already, President Kenyatta has welcomed the Pandora Papers as “enhancing the financial transparency and openness that we require in Kenya and around the globe”, and acknowledged that “the movement of illicit funds, proceeds of crime and corruption thrive in an environment of secrecy and darkness.” One would be forgiven for thinking that it is not his own and his family’s lack of transparency about the source of their wealth, as well as their attempts to cloak the funds “in an environment of secrecy and darkness”, that is in question.

In the final analysis, whether the revelations contained in the Pandora Papers will move the needle on local reform to eliminate financial secrecy and Kenya’s participation in global efforts to rid the world of tax havens, will depend on whether the media can change course. The question our journalists must confront is whether they will remain a lapdog for local elites or become the people’s guard dog.