Will Kenya’s Vision 2030 Megaprojects Bring the North in From the Cold? 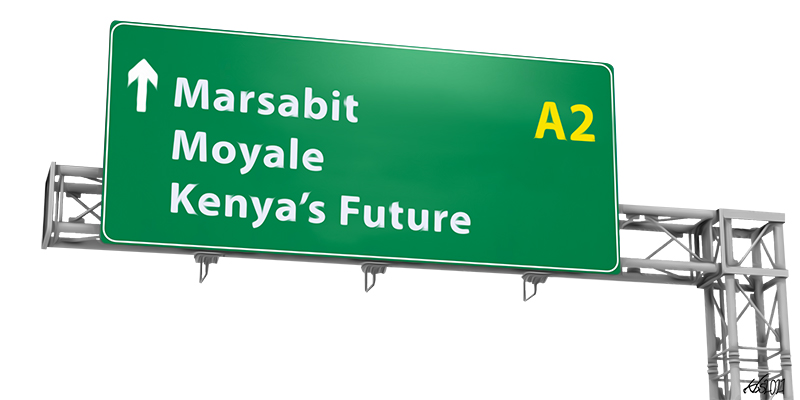 Northern Kenya is the embodiment of the precariousness of a post-colonial nation-state. Both the colonial and the post-independence governments neglected the region, leaving it completely underdeveloped compared to the rest of Kenya, a situation American writer Negley Farson described “as one half of Kenya, about which the other half knows nothing and seems to care even less [about].”

The colonialists referred to the inhabitants as “the hostile tribes” and as the relationship between the rest of Kenya and the north became fraught, the region attempted to secede immediately after Kenya’s independence, a step that set the tone for the way the area was governed post-independence — closed and ignored.

Independent Kenya adopted the methods of the colonial administration and continued to enact restrictive legislation. Where the colonial administration had passed The Outlying District Ordinance of 1902 and The Special District Ordinance of 1934, the Jomo Kenyatta administration passed the Preservation of Public Security Act of 1964, hot on the heels of the Shifta War. In 1970, the government passed the Indemnity Act that applied to North-Eastern Province (Garissa, Wajir and Mandera) and Isiolo, Marsabit, Tana River and Lamu Districts. The Act immunised the government against any claims for compensation for human rights abuses committed between the 25th of December 1963 and the 1st of December 1967.

The securitisation of the region led to egregious human rights violations by state security agencies. Massacres were committed in Wagalla (Wajir), Malka Mari (Mandera) and Daaba (Isiolo), and people and livestock were confined to restricted areas as part of the strategy to counter the Shifta insurgency. Today, high poverty levels among the Waso Borana are attributed to these events, with communities narrating that any livestock found outside the designated areas was either killed or confiscated and taken away by the military.

Thousands of families escaped to Somalia, only returning in the early 1990s and settling in lower Garbatulla in Isiolo County. To date, some of these people have no Kenyan identification documents, which are vital for access to services such as opening a bank account, MPESA (mobile money) transactions, admission to tertiary education, and travel from rural villages to Isiolo town.

The securitisation of the region led to egregious human rights violations by state security agencies.

Government policy changed with the adoption of Sessional Paper No. 8 of 2012 on the National Policy for the Sustainable Development of Northern Kenya and other Arid Lands, which aims to address development imbalances, reduce poverty, manage violent conflict and ethnic strife, address climate challenges and make investments in the livestock markets sector among others.

Isiolo County is referred to as the gateway to northern Kenya. Situated about 285Km from Nairobi, this once sleepy and dusty county now finds itself at the centre of Kenya’s development plans. In effect, the government has placed Isiolo at the heart of Kenya’s Vision 2030,  the country’s new development blueprint for transforming Kenya into “a newly industrialised, “middle-income country providing a high quality of life for all its citizens” by the year 2030.

Vision 2030 is perhaps an antidote to Sessional Paper no. 10 of 1965 on African Socialism and its Application to Planning in Kenya. This first post-independence development plan created a dichotomy of low potential and high potential regions, a logic that placed northern Kenya in the low potential region, with the result that it received little in the form of investment from the government.

The key pillars of Vision 2030 are mega-infrastructure projects, some of which are national and some of which are regional and involve Isiolo County. The county has been selected to host one of the three resort cities planned for northern Kenya and destined to become industrial, economic and tourist hubs. The other two cities will be in Lamu and Turkana. Other flagship projects are the proposed multi-billion-shilling Crocodile Jaw dam on Ewaso Ng’iro River on the Laikipia-Isiolo border, which is facing stiff resistance from the local communities and environmentalists due to fears that it will negatively affect over 3.5 million people and wildlife downstream.  Other already completed projects are the Isiolo International Airport and the Isiolo-Moyale highway.

Isiolo’s strategic location makes it a regional transport hub linking northern Kenya to the rest of Kenya and to Sudan, Ethiopia, and Somalia through the multi-billion-shilling Lamu Port-South Sudan-Ethiopia-Transport (LAPSSET) corridor.

While these developments will undoubtedly spur Isiolo’s growth, they risk causing more conflict unless judiciously executed; the region already experiences ethnic strife, cattle rustling, cross-border conflict, land and boundary conflicts between Isiolo and the neighbouring counties of Meru, Garissa and Wajir, and there is a new simmering boundary tension with Marsabit and Laikipia counties.

The benefits expected to accrue from these investments have heightened tensions between Isiolo and the neighbouring Garissa and Meru counties, with each county laying claim to a road or an area. The likelihood of border conflict is therefore high with the planned construction of the US$750 million (KSh81 billion) Horn of Africa Gateway Development Project (HOAGD) — formerly the Northern-Eastern Transport Improvement Project (NETIP) — which is set to begin this year. Once completed, the road will link Isiolo to Garissa, Wajir and Mandera.

In his report LAPSSET — The history and politics of an eastern African megaproject, Adrian J. Browne argues that Kenya’s optimism about the LAPSSET project is based on “conservative feasibility statistics”. According to him, large-scale infrastructure projects “could inject between 2% and 3% of GDP into the [Kenyan] economy” and even yield higher growth rates of between 8 and 10 per cent of GDP when fully operational. Such growth would be a game-changer and could transition Kenya into a middle-income country.

While these developments will undoubtedly spur Isiolo’s growth, they risk causing more conflict unless judiciously executed.

The 6,500 acres of land at Kipsing Gap —  sandwiched between Katim Hill and Ol Doinyo Degishu Hill — about 20 kilometres west of Isiolo town, is where the multi-billion-shilling resort city will be established. However, the Kipsing Corridor is the area the communities fall back on during periods of drought.

Speculative land buying in anticipation of the large-scale infrastructure projects could potentially displace the local people. Large-scale infrastructure projects are also the source of fierce contestation between the local communities and even spiteful remarks between the county’s political leaders, with each claiming a section of the area where they believe a project will be implemented. Isiolo leaders have also claimed that they have little or no information about the project.

Those opposed to conservancies challenge the prominence given to wildlife over pastoralism, and express fears over bio-piracy and the loss of potential grazing land. They also cite the risk of increased conflict, and the replacement of traditional resource governance institutions such as Deedha with ineffective structures.

The influence of the conservation sector is so entrenched within the political leadership such that government officials from the criminal justice system to the interior ministry are appointed to the NRT board, a move that is designed to legitimise its operations. Noordin Haji, Kenya’s Director of Public Prosecutions (DPP) has been proposed to sit on the NRT board, which is also scouting for a representative from the Ministry of Interior and Coordination of National Government.

To entrench its existence further, the NRT is also suspected of having sponsored a “deformed” bill, the Isiolo County Community Conservancies Bill 2021, which was hurriedly formulated and adopted without public participation.

The Kenya Wildlife Service (KWS) was established in 1989 to conserve and manage wildlife. However, the NRT has grown in influence, outstripping the KWS through donor funding; the organisation has taken the lead in shaping Kenya’s wildlife conservation policies.

The NRT claims on its website to be a grassroots conservation outfit, building peace and conserving the natural environment. However, local communities in Isiolo blame the organisation for using the dreaded and well-trained 9-1 and 9-2 conservancy rangers to support Samburu raiders during inter-community conflict. An unpublished 2019 report produced by Waso Borana Professionals (WBP), Errant Natives and the Borana Council of Elders (BCE) provides details of documented gross human rights violations, unfulfilled promises, and compromised livelihoods due to loss of strategic water points and grazing lands.

Local communities in Isiolo blame the NRT for using the dreaded and well-trained 9-1 and 9-2 conservancy rangers to support Samburu raiders during inter-community conflict.

Deadly and violent conflict has been a feature of the region for decades, the feuding often driven by conflict over pasture and water and facilitated by easy access to Small Arms and Light Weapons (SALW).

But the proposed mega-infrastructure projects have now shifted the focus of conflict to disputes over land and boundaries, an emotive issue that reinforces the deep-rooted sentiments of regional exclusion and inequality.

If Kenya is serious about its development ambitions, the government must walk the talk and redeem itself from the earlier missteps of Sessional Paper Number 10 of 1965, which relegated northern Kenya to the periphery.