The West Must Return the Artifacts They Stole Back to Africa 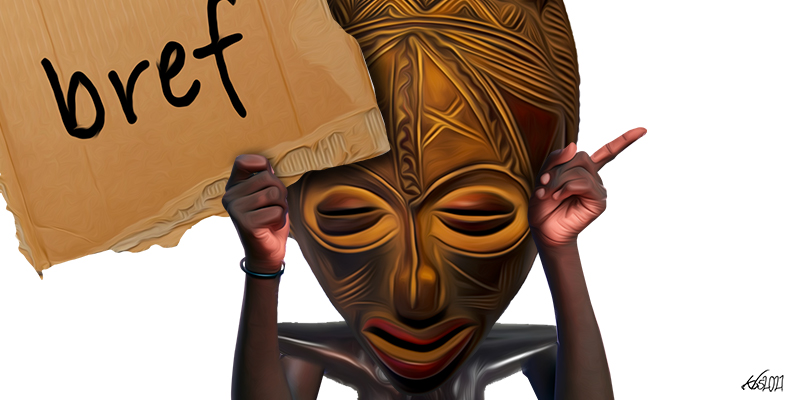 This is in addition to commemorative brass heads and tableaux; carved ivory tusks; decorative and bodily ornaments; healing, divining, and ceremonial objects; and helmets, altars, spoons, mirrors, and much else. Moor also kept things for himself, including the Queen Mother ivory hip-mask. After Moor’s suicide, British ethnologist Charles Seligman, famous for promoting the racist “Hamitic hypothesis” undergirding much early eugenicist thought, purchased this same mask, one of six known examples.

With his wife Brenda Seligman, an anthropologist in her own right, Charles amassed a giant collection of “ethnographic objects.” In 1958, Brenda sold the Queen Mother mask for £20,000 to Nelson Rockefeller, who featured it in his now-defunct Museum of Primitive Art before gifting it in 1972 to the Metropolitan Museum of Art. That’s where I visited it this week in New York City—and as Dan Hicks pointed out in a recent tweet, if you are reading this in the global North, there’s a good chance that an item taken from the Benin Court is in the collection of a regional, university, or national museum near you, too.

For Hicks, author of The Brutish Museums: The Benin Bronzes, Colonial Violence and Cultural Restitution, this provenance history of the Queen Mother mask—and every single other history of the acquisition and transfer of objects from Benin City to museums across the “developed” world—is a history that begins and ends in violence. Indeed, the category of ethnographic museums emerged in the nineteenth century precisely out of the demonic alliance between anthropological inquiry and colonial pillage.

In 1919, a German ethnologist observed that “the spoils of war [Kriegsbeute] made during the conquest of Benin … were the biggest surprise that the field of ethnology had ever received.” These so-called spoils buttressed these museums’ raison d’être: to collect and display non-Western cultures as evidence of “European victory over ‘primitive’, archaeological African cultures.”

The formation of ethnographic museums, including the Pitt Rivers Museum at Oxford, where Hicks currently works, “have compounded killings, cultural destructions and thefts with the propaganda of race science [and] with the normalisation of the display of human cultures in material form” (my italics). For Hicks, the continued display of these stolen objects in poorly lit basement rooms, sophisticated modern vitrines, and private collections is an “enduring brutality … refreshed every day that an anthropology museum … opens its doors.”

After this book, there can be no more false justifications for holding Benin Bronzes in museums outside of Africa, nor further claims that changing times mean new approaches are sufficient for recontextualizing art objects. This book inaugurates its own paradigm shift in museum practices, collection, and ethics. While there are preceding arguments for returning Western museums’ holdings in African art (most notably Felwine Sarr and Bénédicte Savoy’s Restitution of African Cultural Heritage, or Rapport sur la restitution du patrimoine culturel africain), the comprehensiveness of Hicks’s argument is extraordinary.

In chapter after chapter, shifting agilely between historical perspectives and conceptual frameworks, he revisits the siege on Benin and its afterlives in museums across the globe. From Hicks’s detailed appendix, we learn that these stolen objects can be found in approximately 161 different museums and galleries worldwide, from the British Museum to the Louvre in Abu Dhabi, with only 11 on the African continent.

For part of the book, Hicks engages in a kind of conventional historiography, tracing how the Benin Punitive Expedition was justified, planned, and funded by a range of individuals and institutions in chartered joint-stock companies, the military, the British government, and the press. The 1897 British “expedition” to Benin City in present-day Nigeria was defended by the British as a necessary “punitive” response to the killing of at least four white men.

These men had been murdered trying to make their way to the City of Benin, doing so despite the strict injunction given previously by the Oba that they not attempt entry or else they would face death. Hicks traces how the British regularly fabricated reasons for this kind of retributive violence (often even in the name of abolitionism) to mask what was actually a concatenation of overlapping “small wars” and punitive expeditions reaching back into the middle of the 19th century.

An accretion of details halfway into the book—the maneuvers and lines of attack, the catalogues of officers, Hausa soldiers and carriers, the weight and numbers and types of guns and other weaponry (“Dane guns (muzzle-loading smooth-bore flintlock muskets), pistols, machetes, cutlasses, spears, bows and arrows, knives”)—makes the book sag a little in the middle.

While this will grab the attention of those readers interested in plumbing colonialism’s ultraviolent depths and its flagrant disregard for the legal limits of what was permissible in war (we learn of bullets filed down “to convert them into expanding bullets [to] cause a more extensive wound when hitting a human target,” for instance), for those most interested in Hicks’s arguments about the ethnographic museum today, I recommend skipping ahead to the last chapters.

For after all, Hicks’s details recount a history that has been woefully told and retold in different incarnations: a narrative of extraction, ultraviolence, racism. The Brutish Museums’ most forceful contribution lies ultimately in Hicks’s assessment and condemnation of the present state of affairs of museum curatorship, especially within anthropological museums and associated institutions.

The complicity of museum curators and staff in efforts to justify the looting is not unique to the early collectors and anthropologists. Hicks deplores the rhetorical ruses of contemporary curators and museum officials who gloss over the problem at the heart of museums’ acquisitions by arguing instead that museums have become “international,” “borderless,” and “universal” spaces showcasing “world culture.” These claims that a kind of international inclusivity can be brought about under the banner of the “universal museum,” and that this is sufficient to remedy the violences inherent in the collections themselves, sidestep the fact that that such frameworks do nothing to dislodge the colonial geographic logic of metropole and periphery that brought the museums into existence in the first place.

Hicks also picks a fight with art history’s love affair with Object Studies, a field which treats an object’s meaning as determined mainly by its context and reception. As he points out, this often allows us to detach an object from the (often violent) human histories that brought those newer meanings into being. The misuse of Mary-Louise Pratt’s concept of the “contact zone” as a way to organize museum collections comes under similar attack, since curators have used it to emphasize colonial cultural encounters as exchanges and “entanglements” rather than as relations of subordination and pillage under duress.

Today, Hicks avows: “A time of taking is giving way to a time of returns.” As Greer Valley has pointed out, there have been endless debates; action is the only possible way forward. Some museums and galleries have heeded the call to repatriate stolen material culture, and museums such as Senegal’s Museum of Black Civilizations in Dakar and the soon-to-be-built Edo Museum of Western African Art in Benin City (designed by architect David Adjaye) indicate that shifts are occurring at the level of action as well as idea.

In order for repatriation to be accelerated and standardized, museums particularly need to be more transparent about their holdings. Hicks notes that “it is … currently unclear how many skulls and other human remains taken from Benin survive in museums and private collections—although at least five human teeth found their way from Benin City in 1897 to London, and are now lying at the British Museum in a divination kit, strung on a necklace, and contained within a brass mask.” It’s not apparent to me why museums aren’t able to give an appropriate account of both what objects they have and how they have come to have them. In recent debates in the US about human remains held at the University of Pennsylvania’s Archeology and Anthropology Museum, the Smithsonian, Harvard University, and elsewhere, similar obstacles are regularly raised about these problems of counting collections. But catalogs need to be clear and made public, and museums must hold themselves accountable in both material and ethical senses. This, they all know now, means the first necessary step is to return what is not theirs. How they then reinvent themselves as spaces of accountability will be the next task of the curator.