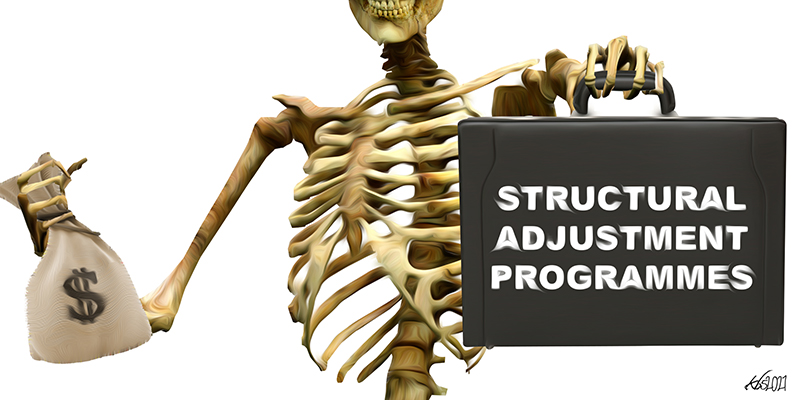 Never did I imagine that opposing an International Monetary Fund (IMF) loan to Kenya would be viewed by the Kenyan authorities as a criminal act. But that is exactly what transpired last week when activist Mutemi Kiama was arrested and charged with “abuse of digital gadgets”, “hurting the presidency”, “creating public disorder” and other vaguely-worded offences. Mutemi’s arrest was prompted by his Twitter post of an image of President Uhuru Kenyatta with the following caption: “This is to notify the world . . . that the person whose photograph and names appear above is not authorised to act or transact on behalf of the citizens of the Republic of Kenya and that the nation and future generations shall not be held liable for any penalties of bad loans negotiated and/or borrowed by him.” He was released on a cash bail of KSh.500,000 with an order prohibiting him from using his social media accounts or speaking about COVID-19-related loans.

Mutemi is one among more than 200,000 Kenyans who have signed a petition to the IMF to halt a KSh257 billion (US$2.3 billion) loan to Kenya, which was ostensibly obtained to cushion the country against the negative economic impact of COVID-19.  Kenya is not the only country whose citizens have opposed an IMF loan. Protests against IMF loans have been taking place in many countries, including Argentina, where people took to the streets in 2018 when the country took a US$50 billion loan from the IMF. In 2016, Eqyptian authorities were forced to lower fuel prices following demonstrations against an IMF-backed decision to eliminate fuel subsidies. Similar protests have also taken place in Jordan, Lebanon and Ecuador in recent years.

Why would a country’s citizens be against a loan given by an international financial institution such as the IMF? Well, for those Kenyans who survived (or barely survived) the IMF-World Bank Structural Adjustment Programmes (SAPs) of the 1980s and 90s, the answer is obvious. SAPs came with stringent conditions attached, which led to many layoffs in the civil service and removal of subsidies for essential services, such as health and education, which led to increasing levels of hardship and precarity, especially among middle- and low-income groups. African countries undergoing SAPs experienced what is often referred to as “a lost development decade” as belt-tightening measures stalled development programmes and stunted economic opportunities.

In addition, borrowing African countries lost their independence in matters related to economic policy. Since lenders, such as the World Bank and the IMF, decide national economic policy – for instance, by determining things like budget management, exchange rates and public sector involvement in the economy – they became the de facto policy and decision-making authorities in the countries that took their loans. This is why, in much of the 1980s and 1990s, the arrival of a World Bank or IMF delegation to Nairobi often got Kenyans very worried.

In those days (in the aftermath of a hike in oil prices in 1979 that saw most African countries experience a rise in import bills and a decline in export earnings), leaders of these international financial institutions were feared as much as the authoritarian Kenyan president, Daniel arap Moi, because with the stroke of a pen they could devalue the Kenyan currency overnight and get large chunks of the civil service fired. As Kenyan economist David Ndii pointed out recently at a press conference organised by the Linda Katiba campaign, when the IMF comes knocking, it essentially means the country is “under receivership”. It can no longer claim to determine its own economic policies. Countries essentially lose their sovereignty, a fact that seems to have eluded the technocrats who rushed to get this particular loan.

When he took office in 2002, President Mwai Kibaki kept the World Bank and the IMF at arm’s length, preferring to take no-strings-attached infrastructure loans from China. Kibaki’s “Look East” economic policy alarmed the Bretton Woods institutions and Western donors who had until then had a huge say in the country’s development trajectory, but it instilled a sense of pride and autonomy in Kenyans, which sadly, has been eroded by Uhuru and his inept cronies who have gone on loan fishing expeditions, including massive Eurobonds worth Sh692 billion (nearly $7 billion), which means that every Kenyan today has a debt of Sh137,000, more than three times what it was eight years ago when the Jubilee government came to power. By the end of last year, Kenya’s debt stood at nearly 70 per cent of GDP, up from 50 per cent at the end of 2015. This high level of debt can prove deadly for a country like Kenya that borrows in foreign currencies.

When the IMF comes knocking, it essentially means the country is “under receivership”.

The Jubilee government would have us believe that the fact that the IMF agreed to this loan is a sign that the country is economically healthy, but as Ndii noted, quite often the opposite is true: the IMF comes in precisely because a country is in a financial crisis. In Kenya’s case, this crisis has been precipitated by reckless borrowing by the Jubilee administration that has seen Kenya’s debt rise from KSh630 billion (about $6 billion at today’s exchange rate) when Kibaki took office in 2002, to a staggering KSh7.2 trillion (about US$70 billion) today, with not much to show for it, except a standard gauge railway (SGR) funded by Chinese loans that appears unable to pay for itself. As an article in a local daily pointed out, this is enough money to build 17 SGRs from Mombasa to Nairobi or 154 superhighways like the one from Nairobi to Thika. The tragedy is that many of these loans are unaccounted for; in fact, many Kenyans believe they are taken to line individual pockets. Uhuru Kenyatta has himself admitted that Kenya loses KSh2 billion a day to corruption in government. Some of these lost billions could actually be loans.

IMF loans with stringent conditions attached have often been presented as being the solution to a country’s economic woes – a belt-tightening measure that will instil fiscal discipline in a country’s economy by increasing revenue and decreasing expenditure. However, the real purpose of these loans, some argue, is to bring about major and fundamental policy changes at the national level – changes that reflect the neoliberal ethos of our time, complete with privatisation, free markets and deregulation.

The first ominous sign that the Kenyan government was about to embark on a perilous economic path was when the head of the IMF, Christine Lagarde, made an official visit to Kenya shortly after President Uhuru was elected in 2013. At that time, I remember tweeting that this was not a good omen; it indicated that the IMF was preparing to bring Kenya back into the IMF fold.

Naomi Klein’s book, The Shock Doctrine, shows how what she calls “disaster capitalism” has allowed the IMF, in particular, to administer “shock therapy” on nations reeling from natural or man-made disasters or high levels of external debt. This has led to unnecessary privatisation of state assets, government deregulation, massive layoffs of civil servants and reduction or elimination of subsidies, all of which can and do lead to increasing poverty and inequality. Klein is particularly critical of what is known as the Chicago School of Economics that she claims justifies greed, corruption, theft of public resources and personal enrichment as long as they advance the cause of free markets and neoliberalism. She shows how in nearly every country where the IMF “medicine” has been administered, inequality levels have escalated and poverty has become systemic.

Sometimes the IMF will create a pseudo-crisis in a country to force it to obtain an IMF bailout loan. Or, through carefully manipulated data, it will make the country look economically healthy so that it feels secure about applying for more loans. When that country can’t pay back the loans, which often happens, the IMF inflicts even more austerity measures (also known as “conditionalities”) on it, which lead to even more poverty and inequality.

IMF and World Bank loans for infrastructure projects also benefit Western corporations. Private companies hire experts to ensure that these companies secure government contracts for big infrastructure projects funded by these international financial institutions. Companies in rich countries like the United States often hire people who will do the bidding on their behalf. In his international “word-of-mouth bestseller”, Confessions of an Economic Hit Man, John Perkins explains how in the 1970s when he worked for an international consulting firm, he was told that his job was to “funnel money from the World Bank, the US Agency for International Development and other foreign aid organisations into the coffers of huge corporations and the pockets of a few wealthy families who control the planet’s resources”.

Sometimes the IMF will create a pseudo-crisis in a country to force it to obtain an IMF bailout loan.

The tools to carry out this goal, his employer admitted unashamedly, could include “fraudulent financial reports, rigged elections, payoffs, extortion, sex and murder”. Perkins showed how in the 1970s, he became instrumental in brokering deals with countries ranging from Panama to Saudi Arabia where he convinced leaders to accept projects that were detrimental to their own people but which enormously benefitted US corporate interests.

“In the end, those leaders become ensnared in a web of debt that ensures their loyalty. We can draw on them whenever we desire – to satisfy our political, economic or military needs. In turn, they bolster their political positions by bringing industrial parks, power plants, and airports to their people. The owners of US engineering/construction companies become fabulously wealthy,” a colleague told him when he asked why his job was so important.

Kenyans, who are already suffering financially due to the COVID-19 pandemic which saw nearly 2 million jobs in the formal sector disappear last year, will now be confronted with austerity measures at precisely the time when they need government subsidies and social safety nets. Season Two of SAPs is likely to make life for Kenyans even more miserable in the short and medium term.

We will have to wait and see whether overall dissatisfaction with the government will influence the outcome of the 2022 elections. However, whoever wins that election will still have to contend with rising debt and unsustainable repayments that have become President Uhuru Kenyatta’s most enduring legacy.