Burkina Faso: The Age of Revolution Is Back and a Student Movement Is Leading It 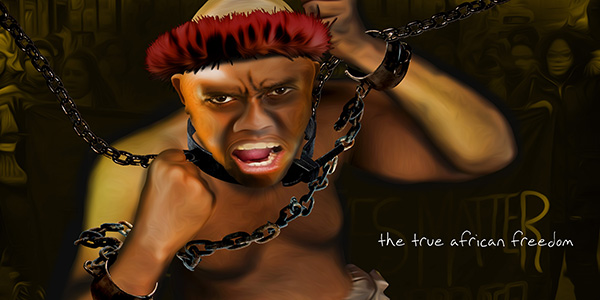 “Nan lara an sara! Nan lara an sara!”: A crowd of roughly 300 students throngs the “freedom square” and chants defiantly, clenched fists in the air. The scene is the campus of Université Joseph Ki-Zerbo, in Ouagadougou. The students are members of Deux Heures pour Nous, Deux Heures pour Kamita (Two Hours for Us, Two Hours for Kamita; referred to here as DHK). “Kamita” is an Afrocentric term, designating the continent. The group is a throwback: A radical student organization dedicated to ideology and analysis, that intends to break from the complacency that has taken hold on African campuses in recent years.

As the meeting builds, a young man roars in the middle of the circle, a megaphone in his right hand, his left hand following the rhythm of the crowd: “nan lara!” (if we lie down!). The crowd responds “an sara!” (we are dead!). After several minutes of call and response, the young man opens the meeting. “Comrades, welcome! Thank you for dedicating two hours today for our beloved Kamita. Today, we seek wisdom from one another in addressing the topic before us: the presence of French military on the free and independent land of Burkina Faso.” He proceeds to lay out the agenda of the day, and the modalities for taking the floor.

Meetings like this one, which I attended in August 2019, take place every day, from 1 to 3 pm, on the campus. They have continued even during the COVID-19 pandemic which compelled attendees to wear facemasks; I have kept in touch with members and interviewed leaders as well as occasional attendees. The meetings are arranged in an open space and amplified with loudspeakers. No position is invalid. No topic is taboo. The group emphasizes innovative radical thinking about democracy, social change, and liberation. But weak arguments are booed, while carefully crafted ones are applauded—especially when they are considered ideologically sound, in the tradition of Frantz Fanon or Thomas Sankara.

Student militancy has revived in Burkinabè public universities over the past decade. As older student organizations become ossified and discredited, emerging ones seek credibility by leaning toward pan-African ideologies. The country and its politics offer a particularly fertile scene for the youth to develop ideological and political organizations that aim to transform society. Slogans such as “Plus rien se sera comme avant!” (Nothing will be as before!) and “Nan lara an sara!” signal such a desire for change and willingness to act. DHK represents a new militancy, with power and potential—but also contradictions and challenges.

DHK formed in 2013, a time when social discontent was growing in Burkina Faso. Workers’ strikes paralyzed many sectors, including higher education. Civil society groups and opposition parties were engaged in a power struggle against then-President Blaise Compaoré, who was attempting to pass a constitutional amendment to extend his rule. The academic community was caught in this malaise. It was in this context that students at Joseph Ki-Zerbo University chose to experiment with a new form of participatory democracy by creating a performative venue on campus.

Over the years, DHK has become prominent among the burgeoning youth movements in Burkina Faso. Beyond the boastful, intellectual verbiage and rhetorical skills that its members show, the organization has built a reputation as a leftist movement that focuses on social justice, political emancipation, and environmental stewardship—both at the national and international levels. In February 2019, for instance, the organization sent a delegate to Venezuela “to support the people of Venezuela in their struggle against imperialism,” a post on its Facebook page reads.

Developing and sustaining a pan-African ideology on a campus where student conferences and intellectual exchange outside the curriculum are almost non-existent is a challenging task. Yet DHK has managed to establish a respected forum where uncensored conversations take place every day, gathering up to several hundred attendees. Every week, a series of discussion topics is chosen and published on Facebook. Often, they respond to the news of the day. At other times, the reflection is oriented toward historical events. There are guest speakers, such as Kemi Seba, the Franco-Beninese activist, or Yacouba Sawadogo, a Burkinabe farmer known as “the man who stopped the desert” for successfully bringing to life a 40-hectare forest on a barren land.

The daily gatherings constitute moments of deliberation, healing, strategizing, and planning. On the day that I attended, social media abounded with polemical information about the alleged opening of a new French military base in Djibo, a small northern town 45 kilometers from the border with Mali. The meeting was an opportunity to condemn the base and discuss the role of France’s counterterrorism activities in the region. Participants equated France’s current presence with its 19th-century pacification doctrine that justified colonialism. “We are inviting France to the school of civilization. We invite her to finally learn to be a nation that respects the sovereignty of other nations,” one man said.

Sometimes, the organization brings speakers who do not have formal education, such as farmers and small craft traders, challenging the perception of what constitutes knowledge in a university setting. This initiative is “an uninhibited approach to learning by uninhibited students who have conscience that development is homemade,” Bayala Lianhoue Imhotep, secretary general of DHK, told me. “No one has the monopoly of imagination. Our farmers are an inexhaustible source of knowledge if we cared to listen to them.”

At first, campus authorities rejected DHK for its radical positions concerning the university and student life. They sought to shut it down and push it off campus. Now, civil society movements beyond campus including Balai Citoyen seek them out. They constitute a force that can mobilize adherents, an antidote to the general fatigue among youth following the 2014 popular revolution.

DHK represents in many ways a revival.

Université Joseph Ki-Zerbo has a tradition of being a center of social movements, with student strikes that often led to a general paralysis of the capital city. The roots of Burkinabè student militancy go back to student unions in the 1950s in Dakar and in France, where Burkinabè and other francophone Africans went to study. Those unions were an avant-garde in political mobilization, a breeding ground of activists in the late colonial period and after independence.

In the early post-independence era, student activism aligned ideologically with the emerging political tendencies in the country. In 1966 the Voltaic Student Union supported the popular insurrection that ousted President Maurice Yameogo. The successive military regimes did not favor the emergence of a strong student unionism. However, during the Sankara years (1984-1987), college students mobilized to support the revolution. In the following two decades, student activism became progressively belligerent toward the Compaore regime. In the 1990s when the Structural Adjustment Programs compelled the government to adopt a much more democratic attitude, granting civil liberties, student militancy reclaimed a momentum. While student militancy never ceased to exist, it suffered in its vivacity since internal divisions and state repression weakened toward the end of the 1990s.

Recent renewal of political consciousness among Burkinabè youth took form through events such as the assassination of the investigative journalist Norbert Zongo in 1998, long worker strikes in 2011 and 2015, student protests leading to violent confrontations with police, and the closing of the university for over three months in 2008 and 2011. Other contributing factors were changes in Franco-African political dynamics following French intervention in Côte d’Ivoire in 2010-11 to topple President Laurent Gbagbo, along with a persistent perception that the international community is hypocritical. Along the way, the memory of Thomas Sankara and his political discourse have re-emerged in popular music and activist rallies.

What is the potential of this revival? On one hand, student militancy today has inherited unresolved structural problems and grievances from their predecessors: deficient infrastructures, mismanaged academic calendar, deteriorated social services, etc. On the other hand, however, the ideological foundation behind student militancy is much more profound. Student activists are not only seeking to resolve their immediate needs, but they question the root causes of their predicament. While their struggle is locally rooted, it is open to other currents from the South. They often extrapolate their perception of inequalities at home with the struggles of other peoples elsewhere such as in Palestine, Venezuela, and Taiwan. They adhere to an Afro-centric understanding of history in their attempt to take control of their destinies as young Burkinabè.

For groups such as DHK, the traditional student associations and unions have become irrelevant, not because they lack grievances to address, but because they do not propose any sound ideology to solve them. DHK positions itself as an anti-imperialist movement, but also one that is opened to the struggles of other contemporary Black liberation movements. At the August 2019 meeting where attendees discussed French counterterrorism in the Sahel, some participants pointed out that the French could easily rid the Sahel of its insurgent groups if France really wanted to—peddling some conspiracy theories that were already circulating in the social media.

DHK is a promising unconventional revival activist group that promotes intellectual and democratic debates. Since its creation seven years ago, it has grown in membership and its ability to mobilize for action. At times however, it can be provocative in its ideas and approach when it connects with controversial figures such as Kemi Seba or when it takes side in some global issues without expertise in their historical complexity such as the Israeli-Palestinian conflict. Nonetheless, this revival is taking place under the radar of most scholars and media attention, who often gloss over it as “growing anti-French sentiment.”

In Ouagadougou, university student militancy is the last stronghold of students’ civil discourse. It is one that still grapples with its own issues, but nonetheless is ideologically promising. As foggy and muddy as some of their thoughts and ideas may be, the youth of DHK are informed by their quotidian reality. It is an ideology rooted in a Sankarist ideology that is daring and even risky at times. But this discourse still represents the clearer demarcation line between civil discourse and what is perceived as growing radical or fundamental discourse in Burkina Faso. Unlike the growing non-state armed movements that are terrorizing the country, student ideological militancy is disruptive, but it is still organized within the limits of free speech and freedom of association guaranteed by the constitution.

Today, the days of grand pan-African reveries espoused by the likes of Kwame Nkrumah and Thomas Sankara seem far behind. The dominant neoliberal economic systems that African nations have adopted and the persistence of neocolonial meddling in the post-colony blunted Afrocentric idealism. Even in academic research, we talk about it in the past and we do not envision it in the present. Two Hours for Us, Two Hours for Kamita gives us a compelling case study to rethink that position.