What Is Trump’s Only Redemption? That He’s an Utter Coward 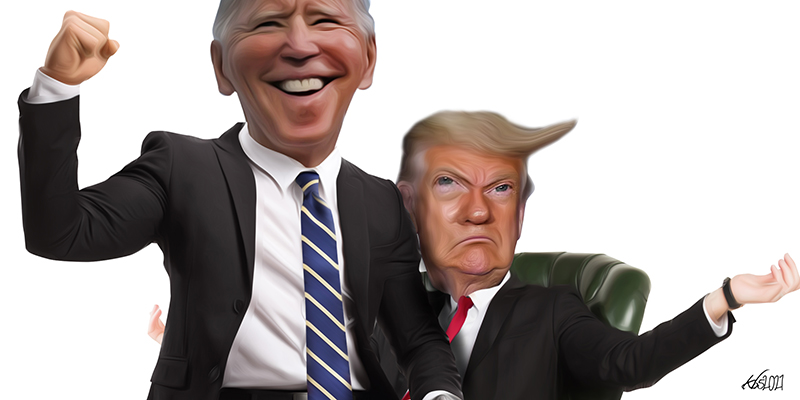 Consider something for a second: how severe could things have gotten, both in America and globally, if Trump weren’t an utter coward?

I can already hear the murmurs of dissent: “How can he be a coward? Trump just tried to overthrow the US government on live television!” Yes, that is entirely true — and yet he didn’t. The entire tenure of his administration seems to have been a series of near misses; flirting with dangerous ideas and flitting back under the umbrella of normalcy just before the precipice. Every disaster that he helped to foist on the world could have been exponentially worse — if only he had been as committed to being the strongman he always boasted to be.

He isn’t. He’s a little daddy’s boy, a frightened man-child who doesn’t have the courage to follow through on the bull he himself spouts in front of adoring supporters. He’s an entitled, rich, spoilt moron and always has been. For all the bluster, when the chips are down, he’s quick to back off. Remember that boastful kid in primary school who was probably dropped off in his family’s C-Class Mercedes and looked down on everyone within insulting distance? He’d puff himself up and spit on others, until one day someone slapped the hell out of him. Upon getting struck, and family power no longer mattering, it became apparent that he didn’t even know how to throw a punch. That’s Trump in a nutshell. But Trump was also the gleeful little sociopath who led the charge in starting a fire only to have it pointed out there could be consequences without Daddy around. Learning of possible repercussions, he was the type to throw others quickly under the bus and backtrack from his own fomented chaos.

To be clear, in the last year especially, Trump absolutely could have gone horrifyingly further than he did. Could you imagine if Trump, the wannabe little dictator that he is, had the convictions (terrible though they are) of a Museveni or an Uhuru? It was within his power to do so, but he kept pulling back. Take for instance the Black Lives Matter movement across the United States in the summer of 2020. Yes, there was horrible police violence, clashes amongst protesters, chaos and destitution. In the midst of all of those charred buildings and the all-pervasive sense of loss in Minneapolis (the city where George Floyd was executed by police), I had a feeling I could not quite shake off as masked marchers swarmed in the streets around me: couldn’t this have been so much worse? To be clear, there absolutely could have been martial law declared but all those Trumpian threats of militarising entire cities never fully materialised beyond a handful of arrests by unidentified officers of questionable loyalties.

Sure, all these things are a horror and an affront to “Western society”. We get it. But all things are relative in politics so imagine if Uhuru had been in Trump’s shoes. Kagame calling the shots. Museveni. What would have happened? Experience tells me that those ugly bruises and lost eyes from rubber bullets would have needed body bags; the amount of live ammunition used would have been innumerable, and the scale of the tragedy would have been of unheard of proportions. Ask a Kenyan university student how their protests tend to wind up; talk to a random Kampala youth about how things shook out a couple weeks after the presidential election. If you can manage to find one, talk to an opposition leader in Rwanda. If there are any brave enough to filter back into Burundi, ask anyone involved in the coup attempt against Nkurunziza a few years back. The point here isn’t to give undue credit to tyrants, but merely to point out that things can always be drastically worse.

What happened in November of 2020 in Kampala? Protests at the arrest of Bobi Wine were met with such utter brutality it was incredible that anyone would dare stick their head out. Officially 54 people were killed but there are claims that the real death toll is in fact far higher. Take the days after the Kenyan re-election of Uhuru Kenyatta back in 2017, when there seemed to be a sort of suspension of what was to come next as the election drama unfolded and the cops came down hard on Kawangware and Kibera. That’s what being a totalitarian looks like. It is cops firing on crowds, social media shutdowns and mass power cuts. Looking back years from now, the reality will prevail that Trump could easily have gone there but didn’t.

That is the essence of Trump, absolutely having the power to be a world-class dictator, but lacking the organisational skills, intelligence, or conviction to jump in all the way. He always dips his toe in at the deep end, but never dives. The waters of reality are always a bit too cold for him, the soup just a bit too hot for his liking. His legacy will be one of having half-assed it in all aspects of his administration, from fascism to COVID-19 vaccine rollouts. I don’t think that it is any real stretch to look at him and state plainly that he’s just too cowardly to really accomplish anything that he aspires to. While Sevo cranks out press-ups on state television, Trump has spent his time cranking out tweets in between bites of “quarter-pounder” cheeseburgers from the comfort of his own bed.

Of course, the Western media will not countenance such comparisons, let alone acknowledge how much worse the situation could have easily become at the US Capitol last January 6th. For the American media, this is (rightly) a major blow to US democracy, but (wrongly) the single worst thing that could have happened. For instance, what if just two more of the thousands of protesters had discharged the firearms they were carrying inside that crowded Capitol Building? What if the pipe bombs planted near the Democratic National Committee and Republican National Committee buildings had exploded? What if the mob had wedged its way into the chambers of the Senate and the House quickly enough to get their hands on members of congress? And what if Trump himself had not backed off and sent out a tepid message to his supporters at the 11th hour?

Think about this: in coup d’état terms, the Trump mob had pulled it off. They had taken the single most important government building in the US and had done so quite easily. Their flags were draped from balconies and their cronies were climbing the ramparts to continue streaming through the doors. They took the seat of government and, for a brief period during the process of transitioning power, successfully interrupted the proceedings and forced all the democratically elected members of congress to scurry into the labyrinth of subterranean tunnels below the Capitol Building to save their very lives. That is a coup. A successful one at that. For one committed to following through on his calls to overthrow the government, this would be a crowning achievement.

Picture this: if three years ago Raila Odinga had called on his supporters to storm State House, and they had successfully done so while Uhuru’s re-election  was being certified, forcing members of parliament to flee in their government-issue Prados, what would that be called? I know what the Western media would have said about it, that it is another sad story of a developing country in Africa that just could not get over the hump of real democracy. There probably would have been some backroom deals with international powers, and an intervention from all those British troops that hold the base up on Mount Kenya may not have been entirely out of the question. Perhaps Raila is the most eloquent example as he does have a bit of a track record of stirring up his supporters after controversial elections then backing down “for the sake of the country” after chaos has already erupted.

The coup was complete but Trump pulled out of it quicker than from his marriage to a wife turning 40. Why? Could it be that it is only when his advisors managed to get his ear during cable news commercial breaks that he realised that he might drown in the madness? I for one certainly think so. When he realised that there would be consequences for his little civil war charade, Trump felt what he always feels — fear. Trump didn’t realise there could be ramifications for what he was doing until someone (not named Mike Pence) put the fear deep into him. He backed off, and American democracy continues shakily on into an uncertain future

Now there actually might be consequences — legal ones at that. Banks are cutting ties and media partnerships are being snuffed out in rapid succession. Some Republicans are now actively jumping ship, others have deflected blame or finally acknowledged that there is a central symptom to the American political condition. It is too little, too late of course, and the task of getting Americans locked in a tribal political death embrace to try not to strangle each other is now firmly in the hands of centrist Democrats who may not actually follow through on the massive economic recovery needed for the citizens of the US to survive the coronavirus pandemic and the resulting economic disaster. Is the US still the preeminent superpower as the Trump administration takes the exit? Yes, unfortunately it is. Imperialism is still alive and well, and frankly could have weighed way more heavily on the global community over the last four years.

A lingering question remains, one that hangs like a suspended piano over the heads of the Democratic establishment: what or who will come along next? It is obvious that the cat has been let out of the dark ethers of conservatism for a while now; just how much has that cohort been emboldened? It is a question that I have asked before, but now as flags were draped on the smoldering fences that were brought down around the US Capitol, the core of the issue remains; what happens if the next Trump is just mad and brave enough to really commit and go all the way? There is an element to Trump that is almost tragic if he were not such a showman; he evoked something amongst a huge swath of the public consciousness, only for it to prove illusory for Trump never understood what he had within his grasp in the first place.

Whoever comes next might just push the boundaries further out, might commit to striking Iran, take concentration camps for immigrants to a greater extreme, declare martial law and put armed troops in the streets with a standing “shoot to kill” order. Someone who might take measures to outlaw efforts to combat global warming and do all of this without batting an eyelid or seeing any reason to back down. The part of the iceberg that sunk the Titanic wasn’t what was visible, but the larger mass just below the surface and out of sight. To put it bluntly, next time the United States might not be pulled back from the brink by cowardice.