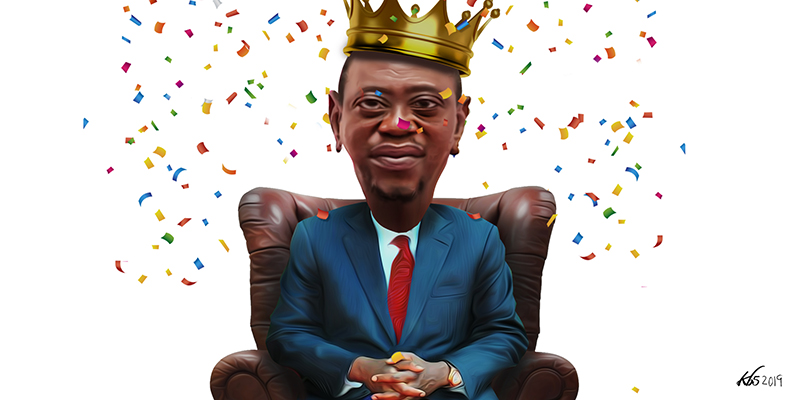 The tyranny of numbers, a phrase first applied to Kenyan politics by one of Kenya’s most well-known political commentators, Mutahi Ngunyi, was repeated ad nauseum during the week of waiting that followed Kenya’s 2013 general elections.

In ads published in the run-up to the 2013 elections by the Independent Electoral and Boundaries Commission (IEBC), people were told to vote, go home and accept the results. Encouraged by a state that had since the 2007 post-electoral violence dominated public discourse and means of coercion, the military pitched camp in polling stations. Many streets in Kenya’s cities and towns remained deserted for days after the polls closed.

According to Ngunyi, the winner of the 2013 elections had been known four months earlier, that is, when the electoral commission stopped registering voters.

In a country whose politics feature a dominant discourse that links political party and ethnicity, the outcome of voter registration that year meant that the Uhuru Kenyatta and William Ruto-led coalition, the Jubilee Alliance, would start the electoral contest with 47 per cent of the vote assured. With these statistics, their ticket appeared almost impossible to beat. For ethnic constituencies that did not eventually vote for Uhuru Kenyatta – the Jubilee Alliance presidential candidate in 2013 – a sense of hopelessness was widespread.

For them, a bureaucratic, professionalised, dispassionate (even boring) discourse became the main underpinning of the 2013 elections.

Uhuru Kenyatta, pressured by opposition protests and a Supreme Court ruling that challenged his victory and ordered a re-run, met with Raila Odinga – his challenger for the presidency in the 2013 and 2017 elections – and offered a settlement. It became known as the Building Bridges Initiative (BBI).

In his 2020 Jamhuri Day speech, Uhuru reiterated that the purpose of the BBI process is to abolish the winner-takes-all system by expanding the executive branch of government.

As he explained it, the challenge to Kenya’s politics is the politicisation of ethnicity coupled with a lack of the requisite number of political offices within the executive branch that would satisfy all ethnic constituencies – Kenya has 42 enumerated ethnic groups.

The revised BBI report that was released on 21 October 2020 (the first was published in November 2019) has now retained the position of president, who, if the recommendations are voted for in a referendum, will also get to appoint a prime minister, two deputy prime ministers and a cabinet.

Amid heckles and jeers during the launch of the revised BBI report, Deputy President William Ruto asked whether the establishment of the positions of prime minister and two deputy prime ministers would create the much sought-after inclusivity. In his Jamhuri Day speech, the president conceded that they wouldn’t, but that the BBI-proposed position of Leader of Official Opposition – with a shadow cabinet, technical support and a budget – would mean that the loser of the presidential election would still have a role to play in governance.

One could not help but think that the president’s statement was informed by the fact that Odinga lost to him in both the 2013 and 2017 presidential elections –  this despite Odinga’s considerable political influence over vast areas of the country.

The 2010 constitution’s pure presidential system doesn’t anticipate any formal political role for the loser(s) of a presidential election. Raila held no public office between 2013 and 2017, when he lost to Uhuru. This did not help to address the perception amongst his supporters that they had been excluded from the political process for many years. In fact, Raila’s party had won more gubernatorial posts across the country’s 47 counties than the ruling Jubilee Alliance had during the 2013 elections.

While Raila’s attempts to remain politically relevant in the five years between 2013 and 2017 were largely ignored by Uhuru, the resistance against Uhuru’s victory in 2017 wasn’t.

The anger felt by Raila’s supporters in 2017 following the announcement that Uhuru had won the elections – again – could not be separated from the deeply-entrenched feelings of exclusion and marginalisation that were at the centre of the violence that followed the protracted and disputed elections.

The reading of Kenyan politics that is currently being rendered by the BBI process is that all ethnic constituencies must feel that they (essentially, their co-ethnic leaders) are playing a role in what is an otherwise overly centralised, executive-bureaucratic state. This is despite the fact that previous attempts to limit the powers of the executive branch by spreading them across other levels of government have often invited a backlash from the political class.

Kenya’s independence constitution had provided for a Westminster-style, parliamentary system of government, and took power and significant functions of government away from the centralised government in Nairobi, placing significant responsibility (over land, security and education, for instance) in the hands of eight regional governments of equal status known in Swahili as majimbo. The majimbo system was abolished and, between 1964 to 1992, the government was headed by an executive president and the constitution amended over twenty times – largely empowering the executive branch at the expense of parliament and the judiciary. The powers of the president were exercised for the benefit of the president’s cronies and co-ethnics.

By 2010 there was not a meaningful decentralised system of government. The executive, and the presidency at its head, continued to survive attempts at limiting their powers. This has continued since 2010.

As Kenya’s political class considers expanding the executive branch of government, no one seems to be talking about restricting its powers.

Beyond the minimum of 35 per cent of national revenue that the BBI report proposes should be allocated to county governments, it is less clear whether the country’s leaders are prepared to decentralise significant powers and resources away from the executive, and away from Nairobi.

Perhaps the real solution to the challenges of governance the BBI process purports to address is to follow the prescriptions of the defunct Yash Pal Ghai team – it went around the country collecting views for constitutional change in 2003-2004.

According to a paper written by Ghai himself, the Ghai-led Constitution of Kenya Review Commission (CKRC) had no doubt that, consistent with the goals of the review and the people’s views, there had to be a transfer of very substantial powers and functions of government to local levels.

The CKRC noted – much like Uhuru Kenyatta and Raila Odinga now have – that the centralised presidential system tends to ethnicise politics, which threatens national unity.

Kenyans told the CKRC that decisions were made at places far away from them; that their problems arose from government policies over which they had no control; that they wanted greater control over their own destiny and to be free to determine their lifestyle choices and their affairs; and not to be told that they are not patriotic enough!

Yes, the BBI report has proposed that 5 per cent of county revenue be allocated to Members of County Assemblies for a newly-created Ward Development Fund, and that businesses set up by young Kenyans be exempted from taxation for the first seven years of operation. However, this doesn’t amount to any meaningful surrender of power and resources by the executive.

In emphasising the importance of exercising control at the local level, Kenyans told the CKRC that they wanted more communal forms of organisation and a replacement of the infamous Administration Police with a form of community policing. They considered that more powers and resources at the local level would give them greater influence over their parliamentary and local representatives, including greater control over jobs, land and land-based resources.  In short, Kenyans have always yearned for a dispersion of power away from the presidency, and away from the executive and Nairobi. They have asked for the placing of responsibility for public affairs in the hands of additional and more localised levels of government.

This is what would perhaps create the much sought-after inclusivity.

But as the BBI debate rages on, the attention of the political class is now on the proposed new positions within the executive branch. And as the debate becomes inexorably linked to the 2022 Kenyatta-succession race, questions centring on political positions will likely become personalised, especially after the political class cobbles together coalitions to contest the 2022 general elections.

Meanwhile, ordinary Kenyans will be left battling the aftermath of a pandemic, and having to deal with the usual stresses brought on by a political class seeking their votes for another round of five years of exclusion.

The more things change, the more they remain the same.