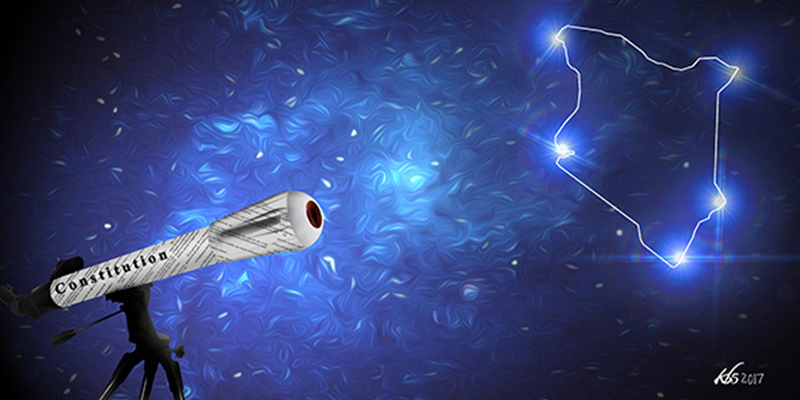 The idea of the people’s sovereignty in our Constitution has been an abstract concept since its promulgation on August 27, 2010. But not any more, thanks to both a state and a political leadership that has led an assault on our sovereignty – so the idea is, now indeed, real and alive! 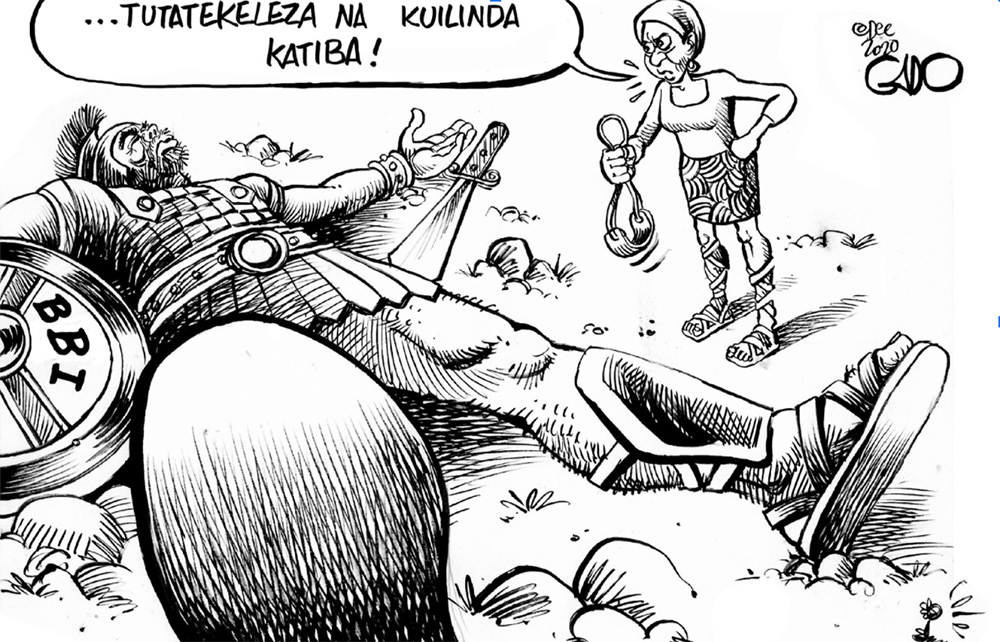 Domination, oppression and exploitation beget resistance. Crises breed opportunities for such a resistance. The COVID-19 pandemic has “raptured normalities” the world over. Kenya has not been an exception as the pandemic has breathed life into the clarion call for the implementation of the 2010 Constitution.

Where do we find the sovereignty of the Kenyan people in the 2010 Constitution?

Right from the beginning, the Preamble of our Constitution: We, the people of Kenya adopt, enact and give the Constitution to ourselves and our future generations. Article 1(1) provides that “All sovereign power belongs to the people of Kenya and shall be exercised only in accordance with this Constitution.” Article 1(1) states “The people may exercise their sovereign power either directly or through their democratically elected representatives.” We are called upon as Kenyans under Article 3 to “respect, uphold and defend the Constitution.” That responsibility and obligation allows Kenyans to make sure “any attempt to establish a government otherwise than in compliance with this Constitution,” which the Constitution decrees as “unlawful” is resisted in our national duty to respect, uphold and defend our Constitution.

It is fundamentally important to bear in mind that we Kenyans can exercise our sovereign power directly.

Participation of the people in all societal matters is a national value under Article 10 of the Constitution. Executive, Legislative, and Judicial authorities are derived from the people of Kenya. So, Wanjiku is also the sovereign President, Speaker, Chief Justice, Senator, MP and MCA, indeed, the sovereign in all public and state offices. The independent institutions, the security apparatuses, and the financial bodies derive their authority from Wanjiku.

The idea of the people’s sovereignty in our Constitution has been an abstract concept since its promulgation on August 27, 2010. But not any more, thanks to both a state and a political leadership that has led an assault on our sovereignty – so the idea is, now indeed, real and alive.

They are all called upon “to protect the sovereignty of the people” of Kenya. National resources are held in trust for Wanjiku. Our Bill of Rights is the most progressive in the world by giving us the promotion and protection of their whole gamut of political, civil, economic, social and cultural rights. Implementing these rights fulfills the promise of our democracy and ensures the equitable distribution of our national resources. The sovereign debt benefits Wanjiku and not the institutions and people to whom she has delegated power.

Our power to recall MPs and MCAs as well as our power to impeach the President reflect that Wanjiku can recall the power she has donated to all state institutions and officers. The state’s “machinery or forces of violence” are told in very clear terms that national security is protection of the sovereignty of the country, “its people, their rights, freedoms, property, peace, stability and prosperity, and other national interests” under Article 238 of the Constitution.

Devolution is about the equitable distribution of political power and resources. It is about grassroots democracy from the village when Kenyans get to control and share not only resources but also their political power.

General COVID-19 marches all over the world

Unfortunately for both the state and the ruling elite – General COVID-19 marched all over the world since January 2020 leaving in his wake death and destruction. Wanjiku started demanding her rights under the 2010 Constitution by asking the state and the elite the following questions: Where is my right to the highest attainable standard of health? Where is my accessible and adequate housing? What about my reasonable standards of sanitation? Where is my freedom from hunger and to have adequate food of acceptable quality? Where is my clean and safe water in adequate quantities? My social security? My children’s education? Why are you denying me emergency medical treatment?

Devolution is about the equitable distribution of political power and resources. It is about grassroots democracy from the village when Kenyans get to control and share not only resources but also their political power

The responses to Wanjiku were inhuman: ulisikia wapi (who told you this?) When Wanjiku insisted on asking these questions the Karaus (security personnel) responded with demolitions of housing, sprayed poisonous tear gas and dangerous water canons to disperse Wanjiku’s children contrary to the dictates of Article 37 of the Constitution. Police officers are ordered other Article to protect the right of citizens to “peaceably and unarmed, to assemble, to demonstrate, to picket, and to present petitions to public authorities.” In my long history of activism I have never seen citizens armed. Indeed, its the police who are armed, and arm goons and criminals to attack peaceful protesters. There were reported extrajudicial killings in the people’s informal settlements. The rich and powerful kept their billions in their foundations and banks (except for two) and shamelessly sold donated PPE’s, surgical masks and vitamins, and announced from the rooftops that they are now COVID-19 millionaires and billionaires.

As if this was not enough, Wanjiku was told to keep social distance, wash hands and wear surgical masks. Curfew was declared and hunger imposed in the bargain. Wanjiku’s cries for justice under the Constitution were met with state brutality and elite responses of Utado (what will you do if you cannot breathe?). No humanity, no caring, extreme callousness and untold greed on the part of the state and the elite. Both the state and ruling elite lost the legitimacy and morality to rule. 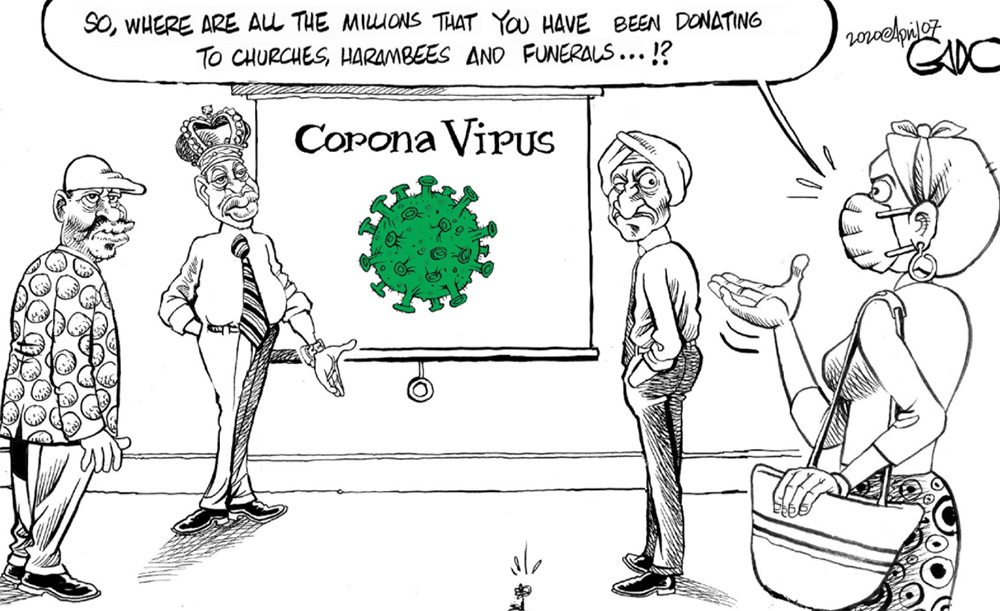 In the midst of all this, Wanjiku is told that the only game in town is called Building Bridges Initiative (BBI). Wanjiku responds Kweli ashibaye hamjui mwenye njaa/those who are never hungry never experience hunger. The response is yet again ulisikia wapi? BBI itafanyika upende usipende/BBI will happen whether you want it or not. Wanjiku can see that the government and the opposition have become an imperial presidency, combining support for imperialism and the engine of dictatorship that we rejected by promulgating the 2010 Constitution. BBI is the subversion of the Constitution and the political coup that is unlawful under Article 3 (2) of the Constitution. Wanjiku has decided to resist BBI and respect, uphold, and defend the Constitution.

The official opposition has ceased to be the government in waiting, signaling the beginning of the idea of an authentic people’s opposition. For Wanjiku, the “people’s president” urged by the leader of the opposition has been demystified as elite chicanery, a ploy to claw back the gains of the 2010 Constitution.

In the midst of all this, Wanjiku is told that the only game in town is called Building Bridges Initiative (BBI). Wanjiku responds Kweli ashibaye hamjui mwenye njaa/those who are never hungry never experience hunger. The response is yet again ulisikia wapi? BBI itafanyika upende usipende/BBI will happen whether you want it or not.

That is how the idea of the sovereignty of Kenya’s people ceased to be abstract. Resistance to the state and the ruling elite in the name of #Tekeleza/Linda Katiba/implement and defend the Constitution is now loud and clear.

Wanjiku’s sovereignty in various matters is being validated in courts through Public Interest Litigation. Various petitions have been filed in the High Court while civil society movements are organizing and mobilizing Wanjiku to stand up for the protection of the Constitution. In the constitutional works is discussion of the institution of private prosecution under Article 3 (2) of the Constitution against the proponents of BBI for seeking to “establish a government otherwise than in compliance with this Constitution.” Activities of the BBI are going to be constitutionally tested and criminal proceedings shall be brought by Wanjiku to stop BBI from overthrowing the Constitution by unlawful means, the crime of treason! 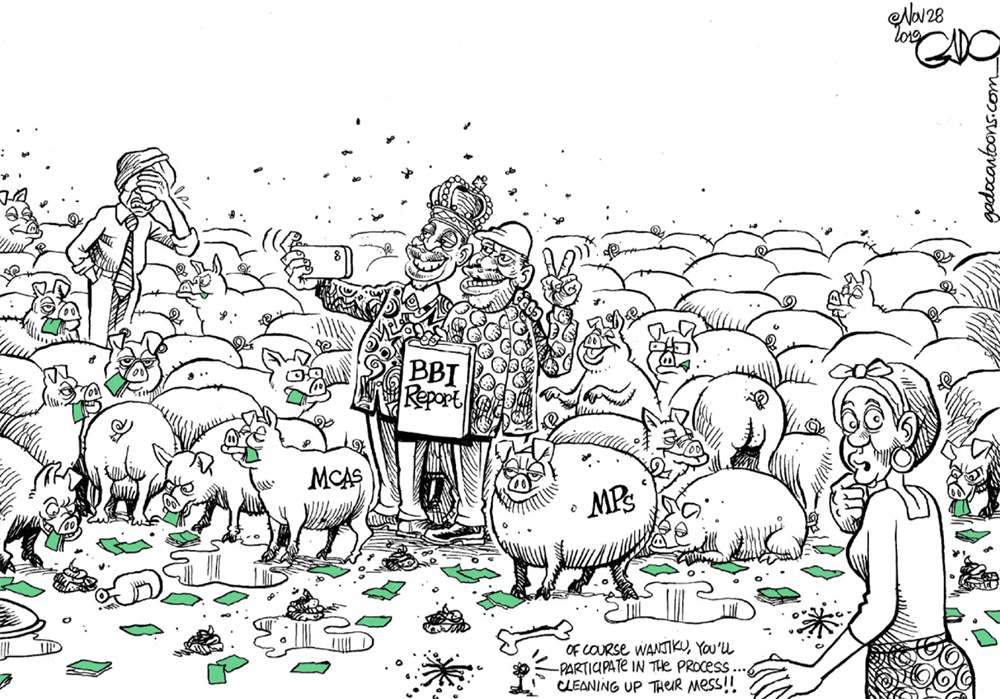 The state and the ruling elite are both endangering our democracy, our peace and security, our prosperity, and our future. BBI cannot be an answer to this national crisis. Police brutality is not an answer to the crisis.

When that happens there must be an alternative political leadership that Kenyans are convinced will be different from the current one – a leadership that will use the institution of the state in the material interests of Kenyans. It has to be a leadership that will implement the critical pillars of the 2010 Constitution while auditing, through a national participatory consultation, from the grassroots, from the ground up, our Constitution. The audit will be about illuminating the weaknesses in the Constitution and thereby plugging those gaps so that the voice of our united people will lead in the decision making of our country’s future.