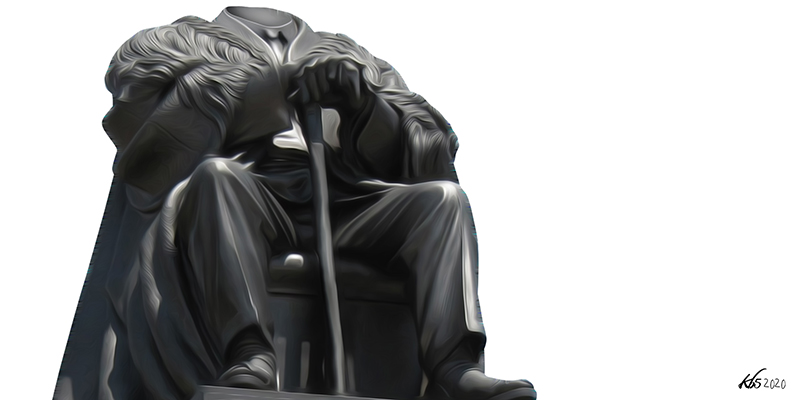 In the last few months, Kenyans on Twitter have been circulating images of statues of political elites replaced by deserving national heroes. Most notable is the replacement of the statue of the first president Kenyatta with that of Mau Mau leader Dedan Kimathi. This movement has been spurred by the toppling of statues in the US and Europe, where protestors are demanding that their countries grapple with the protracted systemic racism that pervades quotidian Black life.

Calls for the removal of statues that serve as colonial and racist relics have become common means of subverting power structures. In 2015, the #RhodesMustFall movement at the University of Cape Town in South Africa successfully called for the removal of British colonialist Cecil Rhodes statue. Rhodes, a British imperialist and mining magnate, was at the forefront of laying the foundations of apartheid in South Africa. This decolonizing movement sparked similar outrage on other campuses, as in Oxford, where protesters are now demanding the removal of the Rhodes statue by the university. Similarly, in the US, the politics of memorialization remain contentious, as calls for institutions to atone for their involvement in slavery continue.

Closer to home, in Kenya, what does the fall of statues mean for most postcolonial cities that are mired in complex and intricate histories, whose architecture centers colonial rulers and the postcolonial elite? Cities were, and remain, arenas of power contestations, political games, and socio-cultural constructions. These conjunctural spaces are important sites of study in that they not only inform us about the larger political situations in the country, but also the relationship between the nation-state and its citizens, the pre-independent state, and its former metropole. Borrowing from Marxist thinker Henri Lefebvre who contends that conceptions of space have always been political, analyzing city structures is paramount.

Attempting to trace the history of Nairobi’s statues and monuments brings up the city’s deep ties to British colonialism, manifested in the politics surrounding this memorial architecture. During the colonial period, England’s proclivity for erecting monuments and naming streets and physical features to honor their own heroes was a tool for their imperial project as they established Western dominance. For example, the Duke of Connaught unveiled the Queen Victoria statue in 1906, signifying the ascendancy of British rule in Kenya. Alibhai Jevanjee, an Indian who owned a shipping company that worked with the Imperial British East Africa Company—a colonial enterprise that administered the protectorates before the British government assumed full responsibilities—paid for its construction. The Queen’s statue was located in the Jevanjee Gardens in the Central Business District until 2015 before it was vandalized. And, in celebration of King George V’s 25-year reign, his life-like statue graced the newly built High Court Square in the city center. Later, during a state of emergency (1952-1959) imposed by the British colonial government in response to growing anti-colonial upheavals, the administrators erected the East Africa Memorial and the King George VI Memorial. The East Africa Memorial, built in 1956 in the Nairobi War Cemetery, recognized the efforts of the multi-racial troops that fought in Italian Somaliland, Southern Ethiopia, Kenya, and Madagascar in an effort to prop up loyalty to the colonial government. In 1957, the King George VI memorial plaque was put up along Connaught Road, now Parliament Road, to assert colonial presence. These statues and monuments were taken down in 1964 after Kenya was recognized as a republic, signaling the end of British rule.

Some might argue that the tearing down of colonial monuments reduced Nairobi’s significance as a site of memory, however telling accurate history to prevent erasure of the past should be emphasized. Initially, removal of the statues, as well as renaming exercises, were a means to promote nationalism and reduce imperial domination in post-colonial Nairobi. Political elites co-opted this process to position themselves at the forefront of the country’s independence struggle, erasing the efforts of deserving nationalists and groups that fervently fought colonization, such as the Mau Mau.

The erection of monuments in Nairobi after independence was strategically undertaken to inscribe power and shift the landscape. These notable monuments were important instruments in asserting authority over Kenyan citizens and especially those who lived in the city and interacted daily with these structures. In 1973, the government commissioned a London-based sculptor, James Butler, to design a twelve-foot seated statue resembling President Kenyatta, showing continuity with the colonial monumental landscape by replacing King George VI plaque at the city square. The statue stands as an island in front of the Kenyatta International Conference Center (KICC) square—the conference center being one of the more salient buildings in Nairobi. The KICC was the tallest building in the city for about 26 years, underpinning the strategic position of the Kenyatta statue. Interestingly, President Kenyatta launched the conference center and the statue during the 10th anniversary of Kenya’s independence.

President Daniel Toroitich Arap Moi came to power in 1978, after Kenyatta’s sudden death and his era was also riddled with monuments as commemorative tools. Just as Kenyatta had the Harambee (pulling together) philosophy, which emphasized collective participation and self-help in development, Moi developed Nyayo, (footsteps) as he was keen on following Kenyatta’s ideals. Nyayo, intended to be a moving force and denoting peace, love, and unity, would later be legitimized as Kenyan law. To be “anti-Nyayo [was] to be anti-Kenya.” Moi set about building monuments all over the city that reflected an ideological philosophy that those around him deeply espoused. On the 20th anniversary of Kenya’s independence in 1983, two monuments were launched: a grand water fountain in Central Park and an intricate National Monument at Uhuru Gardens, just outside the city.

Prior to these celebrations, rumors spread of an alleged coup by Charles Njonjo, a member of the cabinet challenging Moi’s credibility. In response, Moi called for impromptu elections, ensuring that Njonjo’s cronies would be kicked out of the government. The decision to erect these two monuments at the end of the year was, therefore, a strategic signifier that the Moi/Nyayo government was still in power. Geographically, the locations of these monuments were no coincidence either. The Nyayo Fountain was built in Central Park, one of the few remaining public green spaces that most Nairobians frequented to unwind and where most political rallies were held. The National Monument was erected at Uhuru Gardens, the site for the symbolic lowering of the Union Jack at independence. This prominent white Nyayo monument was flanked by two black sculptures to show, ironically, that the government stood for peace and purity.

Erecting statues, as well as renaming streets, institutions, and buildings in Nairobi was meant to signal new political leadership and ideologies. It was also meant to recognize freedom fighters, whose efforts the independent government criminalized and largely ignored. Memorialization is ongoing to date, and despite the practical justifications to erect statues in memory of freedom fighters, the motives of such projects have remained deeply political. For example, it was not until 2007 when Dedan Kimathi’s statue was unveiled, finally recognizing the tremendous efforts of the Mau movement. This statue was put up following surviving fighters’ outcry to honor their marshal. Previously, Kenyan leaders had considered the movement a “terrorist” organization, dropping this colonial-era categorization in 2003, more than 50 years after it was imposed. This would finally allow freedom fighters to demand compensation from the British government for the torture they endured during the rebellion. While Kimathi’s statue is a pride of the city and remains a site of protest and prayers, it has been neglected—unlike Kenyatta’s statute that remains guarded in a controlled space. Furthermore, despite this symbolic recognition of the war heroes, Kimathi’s family, as well as other Mau Mau veterans, continue to live in squalid conditions dispossessed of their land, as the political dynasties plunder our country.

Nairobi remains a space where imperial and postcolonial ideas continually collide to create a new political hybrid that uplifts elite actors while disenfranchising the majority. Monuments celebrating members of the political elite dominate the political landscape, shaping public opinion through farcical reputation-building. As Ugandans call for their streets to be renamed in Kampala, we also insist on not only interrogating and falling our physical structures, which belie the deeds of our “founding fathers,” but also providing history about these monuments that foregrounds the efforts of those who actually fought for our independence.