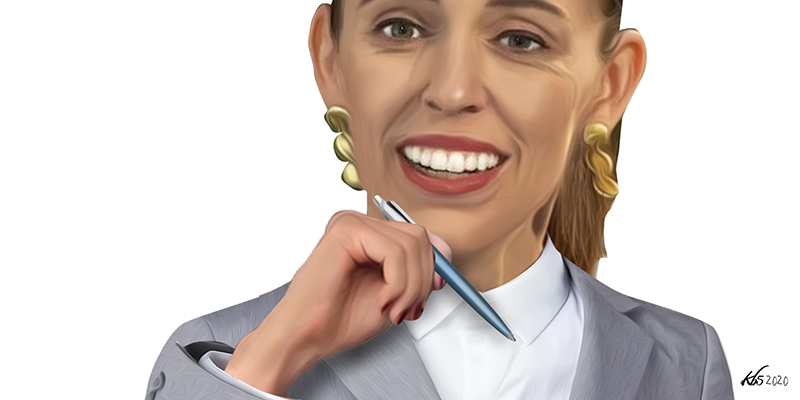 Ever since first coming to power in 2017, New Zealand Prime Minister Jacinda Ardern has been lauded around the world as a refreshingly empathetic and competent contrast to the increasingly right-wing and often inept leadership seen in countries including the US, the UK, Australia, Brazil, and India. The African continent has been no exception to “Jacindamania,” with people in Nigeria, South Africa, Zimbabwe, and more expressing their admiration for Ardern and their desire for a similar leader.

When she won a second term in mid-October on the back of a landslide victory for her center-left Labor Party, for example, Zimbabwean opposition leader Nelson Chamisa tweeted congratulations. Chamisa also used the opportunity to unfavorably contrast Zimbabwe’s election infrastructure (“humbling and refreshing to see others holding clean, free, and fair elections”), though some wished to remind him that he was no Ardern: “at least they lead from the forefront and are very strategic, not just on Twitter writing bible verses!” Elsewhere on social media, some South Africans compared her gender and youthfulness to their revolving door of old, underwhelming leaders. Their Nigerian counterparts, in the midst of a national strike against police brutality, concurred: “Nigeria needs a President like Jacinda Ardern. Young, passionate, hardworking consistent and a listener…” (It helped when one of her party’s candidates, Terisa Ngobi, partly of Samoan descent and married to a Ugandan immigrant, defeated a white South African running in Ōtaki, near the capital Wellington, for the far-right New Conservative party. Martin Flauenstein, who finished fifth out of eight candidates, claimed to be an “apartheid survivor,” only to push for “reduced” immigration and to criminalize abortion. For this, he was thoroughly mocked online by South Africans back home.)

But the international hype around Ardern often obscures what it is she represents, and her actual record to date. While there is no doubt that Ardern is a charismatic and effective leader, she has yet to deliver on her promise to lead a truly transformational government.

Ardern’s first term in office was largely defined by multiple unprecedented crises and she rightly deserves significant praise for her response to them. She has demonstrated calm, compassionate, and effective leadership in steering the country through the white supremacist massacre in Christchurch, the deadly volcanic eruption at Whakaari, and now COVID-19. Her response to the Christchurch massacre and the Whakaari eruption prompted journalist Toby Manhire to describe Ardern as bringing “an empathy, steel and clarity that in the most appalling circumstances brought New Zealanders together and inspired people the world over.” Arden has brought the same approach to the COVID-19 response, where her government’s clear communication and swift and decisive action has resulted in one of the most effective responses in the world.

Yet, despite Ardern’s effective leadership and some scattered positive changes—including tightening the country’s gun laws, increasing New Zealand’s refugee quota, investing a record amount in mental health, and decriminalizing abortion—she has largely failed to live up to her own progressive rhetoric and vision for the country. After coming to power in 2017, Ardern promised a “government of transformation” that would “lift up those who have been forgotten or neglected” and “build a truly prosperous nation and a fair society.” Instead, across a range of areas the reality of her government’s action has often been limited and underwhelming.

On climate change, Ardern described it in 2017 as her “generation’s nuclear-free moment.” And yet while her government banned new offshore oil and gas exploration permits and passed the Zero Carbon Act setting a target of net zero emissions by 2050, existing exploration permits remain valid and the act lacks enforcement mechanisms. Moreover, there is no systematic approach to overhauling different sectors of society to address emissions, particularly in transport and agriculture, and to create a green economy. On voting rights, Ardern’s government partially undid the previous National Party government’s ban on prisoner voting. But in only restoring voting rights for prisoners with sentences of three years or less, the government ensured that most prisoners remain disenfranchised. On welfare, the government made some improvements, including introducing a small increase to benefits—but well below the amount recommended by a working group the government had convened, and ignoring, thus far, the majority of the working group’s other recommendations. On tax reform, despite proposing a modest change to the top tax rate, Ardern has repeatedly ruled out a capital gains tax (to tax the sale of assets) and more recently ruled out a wealth tax proposed by the left-wing Greens. On drug reform, while the government made changes to improve access to medical marijuana, the legalization of recreational use was put to a referendum. Ardern then refused to use her political capital to advocate for legalization or say how she would vote in the referendum, only revealing she voted in favor of legalization after results were announced and the public had narrowly voted against it.

If people across the African continent want nice, competent, centrism then Ardern is certainly a leader to emulate. But if they want truly progressive change then it remains to be seen whether she will provide a compelling example to follow. While Ardern tinkers, the climate crisis worsens, inequality increases, housing becomes ever more unaffordable, and poverty and homelessness persist at alarming levels.

Following the recent election, Labor’s former coalition partner and center-right populists New Zealand First (generally regarded as a handbrake on progress during Ardern’s first term) are now gone from government and parliament and Ardern arguably has more political capital than ever. The resounding victory for the left in New Zealand, with the Labor Party and the Greens combined winning over 70 seats in the 120-seat parliament, means there are now no excuses for Ardern not to enact a coherent transformational progressive agenda.

The next three years will ultimately show whether Ardern has the political will and imagination to do so, but so far she has given little indication that her second term will be significantly different from her first. All we are left with then is centrist tinkering and the seemingly endless accumulation of political capital without ever using it.