Climate Politics: The Grand Plan to Save Forests Has Failed 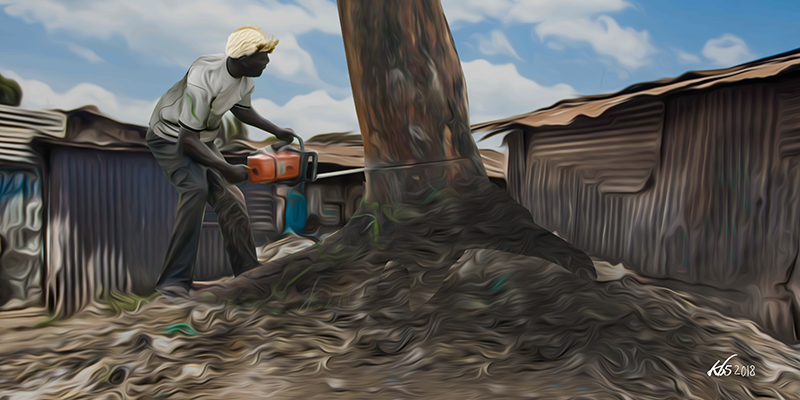 At the 13th Conference of the Parties (COP 13) in 2007, parties to the United Nations Framework Convention on Climate Change (UNFCC) agreed to a grand plan to use forests to “save the world” from the climate change crisis. Reducing emissions from deforestation and forest degradation in developing countries (named REDD+) was born out of the recognition that forest conservation can significantly reduce greenhouse gases (GHGs). The premise for REDD+ is straightforward: tropical forests are the world’s lungs, storing roughly 25 percent (300 billion tons) of the planet’s terrestrial carbon dioxide—a greenhouse gas. However, since 1990, more than 420 million hectares of forests have been chopped down to make way for farms, housing and shopping malls, releasing carbon dioxide into the atmosphere and reducing the storage capacity of the forests.

REDD+ proposes a simple solution. Developed countries do not want developing countries to “make the same mistake” of forest-dependent economic development and so are willing to compensate developing countries for this “lost opportunity.” For example, the US cleared up 90% of its virgin forests between 1600 and 1900 on its way to industrialization. As part of reducing their emissions, rich countries and their corporations can help “save” a tropical forest and claim the resulting carbon credits. Practically saving or conserving a forest could mean funding for the conversion of forests into protected areas, paying local communities to move from forest-dependent livelihoods to alternative livelihoods, or a focus on conserving forests and tree species—like Grevillea robusta, Pinus radiata, Spekboom or Eucalyptus—that are good for the capture of carbon but of little tangible value to local communities.

While the rationale and mechanism of REDD+ seem straightforward, the implementation and the results have been unsatisfactory and mired in controversy. Twelve years of REDD+ have been unable to significantly reduce deforestation. In places like Mai-Ndombe in the Democratic Republic of the Congo (DRC), REDD+ has failed to both halt deforestation and benefit local communities. While architects of the program, who mostly reside in the West, are concerned with clean air and greenhouse gasses, custodians of the majority of the forests in developing countries, including indigenous people and forest-dependent communities, are thinking about where the next meal will come from.

As part of my research on Malawi, for example, I have shown that forests are important for the nutrition of forest-dependent communities. Such custodians of the forests, however, were not fully involved in the design of REDD+, nor its implementation on the ground. As Abdul-Razak Saeed and others pointed out, “while communities were engaged in the REDD+ projects, their engagement was often in an ad-hoc fashion. Decisions were taken before communities were consulted to gauge their reaction.” In Peru, local communities were only consulted after the project was approved, while in Kinshasa, projects were developed before being shared with communities.

At the core of the REDD+ are neoliberal and corporate-friendly ideas. These ideas are aimed at evading the problem caused by the real polluters by creating a market for carbon to continue to extract profits unabated. Africa as a whole only contributes 3% to GHGs. REDD+ is functioning as a form of governance—a particular framing of the problem of climate change and its solutions that validates and protects the ways of life of capitalism while marginalizing the lives of forest dependent communities and shifting the development trajectory of the developing countries away from what most developed nations did. It is, as others have labeled it, “CO2loniasm.”

As many critics have argued, REDD+ secures the property rights of global North fossil fuel users while maintaining the opportunities for corporate profit over forest-dependent communities. REDD+ in this context is part of a longer history of neoliberalism, which represents the marginalization of vulnerable groups of people similar to conservation projects, and where success is measured by the number of locals who can be persuaded with money to give up their livelihoods, birthrights, and other forms of identity that are heavily interwoven with forests. These communities have to take up other ways of life that can save the forest beyond what would be required to make the community carbon neutral for the benefit of Western elites.

As some projects that have been implemented under REDD+ have shown, the negative impacts on indigenous and forest-dependent people are rampant. For example, in the DRC, which is one of the early experimental sites with several projects, researchers found that the projects were leading to land grabs. Another example is in Uganda where a Norwegian company bought huge tracts of land to plant fast-growing plants. However, the commercial plantations in this project barred local households from harvesting any timber or other NTFPs, resulting in loss of income for the entire community.

Furthermore, REDD+ links forest conservation and more than one billion people who depend directly on forests to global carbon markets—exposing them to volatile commercial power structures. The communities would be at ransom to the price of carbon and the vicissitudes of the financial sector. Whenever the price of carbon increases, the demand for carbon credits rises in tandem pushing more people out of their traditional lands and ways of life.

Solutions arrived at in the big conference halls of the West, implemented in developing countries without the full participation of the people, are bound to fail. New ideas that explicitly involve the forest-dependent communities are imperative. Ongoing research by the Center for International Forestry Research (CIFOR) on the impact of REDD+ initiatives on community livelihoods highlights the need for policies that respond to the unique ways that local communities use their forests. As Alain Fréchette of the Rights and Resources Institute notes, “strong indigenous and community land rights and a clear understanding of who owns forest carbon are vital prerequisites for climate finance to succeed in its goals of reducing poverty and protecting forests.”

“To succeed, these projects must include the communities that have managed these forests for generations,” says Chouchouna Losale of the DRC’s Coalition of Women Leaders for the Environment and Sustainable Development. Western countries will have to face the grim reality that saving the world from the climate catastrophe will not come from African countries, but by addressing the source of the greenhouse gases within their boundaries. African governments need to protect the marginalized and have the right to determine their own path to sustainable development. This will happen when negotiations are balanced and inclusive. For example, a pilot REDD+ project in Nepal was billed as successful because it fully involved the national and community level institutions in decision making and forest conservation. As the authors of the study reported, “participating communities were enthused…and met more frequently to make community decisions related to forests.”