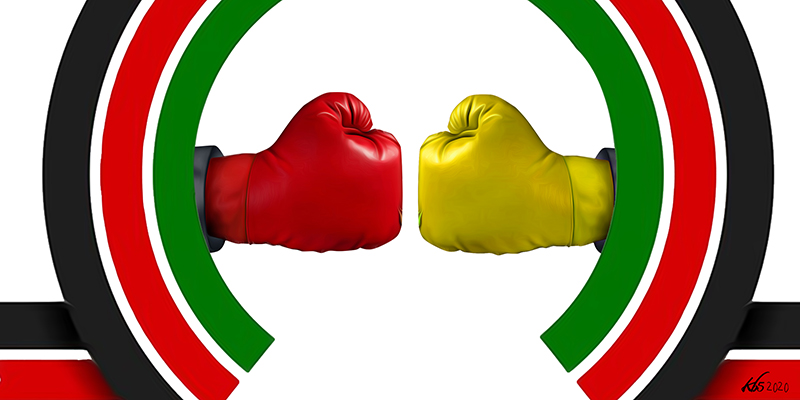 The furore over Kapsaret MP Oscar Sudi’s recent comments regarding the first family has left many Kenyan women baffled, not least because Kenyan men are not known to be great defenders of women or their body parts. It has been alleged – and the media has erroneously reported – that, in alluding to her breasts, Mr Sudi insulted Mama Ngina, the former first lady and mother of the current president, Uhuru Kenyatta.

When I first heard about this on social media, I thought it was yet another typically crude example of Kenyan misogyny. There are countless examples of Kenyan men, particularly politicians, insulting and deriding women. Female politicians and activists are a favourite target. Women who dare to defy patriarchal norms do not find a comfortable home here. In fact, they have to fight tooth and nail to be recognised.

The late President Daniel arap Moi, for instance, once referred to Nobel laureate Wangari Maathai as a woman who had “dudus in her head” when she was protesting the building of a tall office block in Uhuru Park. Recently, Mutahi Ngunyi, a State House operative, referred to Martha Karua, a former Minister of Justice and a presidential candidate in the 2013 election, as “a grandmother with average intelligence and a bloated ego” after she gave a TV interview that challenged the president and Raila Odinga to come clean on the motives behind their rapprochement. (Note: Ngunyi’s use of the word “grandmother” was to suggest that Karua had reached her sell-by date and that she should focus on family matters, not politics. In this case, the insulting of grandmothers was not viewed as hate speech by the authorities.)

Those of us who have cared to listen to the speech that caused so much uproar in the country will agree that Sudi did not insult Mama Ngina’s breasts. He merely stated that Uhuru Kenyatta should not believe that the breasts that he suckled are better than the breasts that Sudi suckled.

What Sudi was simply trying to say (and which got lost in the state’s accusations of “hate speech” and “incitement”) was that all Kenyans are equal and that Uhuru and his family should not believe that they are more important than the rest of Kenyans or that the country belongs to them.

In any other period in our political history, these comments might even be considered heroic – an act of rebellion against hegemonic forces. I would go further to say that Sudi has the right to freedom of expression, which is guaranteed by our constitution, so he can say what he wants as long as his utterances are not inflammatory or based on lies. After all, did the young Jomo not say similar things against the British in London’s famous Hyde Park? Is this not what the Mau Mau were saying to the British colonialists when they took up arms against them? Is this not what was conveyed to President Moi during the “Second Liberation” protests? Did Raila Odinga (who was once the leader of the opposition) not challenge election results several times because he wanted Mwai Kibaki and Uhuru Kenyatta to know that Kenya does not belong to just one tribe or to one political party? Fighting for your rights is guaranteed by the 2010 constitution.

But then you have to remember that it was during Jomo Kenyatta’s time that insulting the first family became a criminal offence. Jomo’s Machiavellian Attorney General Charles Njonjo deemed that even imagining the death of the president was punishable. Are we returning to those days of the imperial presidency?

Before I return to the issue of breasts and their significance in the Kenyan imagination, let us recall how we got to this place.

You may remember that prior to the 2013 elections, Uhuru Kenyatta made a Faustian pact (some call it a marriage of convenience) with William Ruto – his fellow indictee at the International Criminal Court (ICC). The deal – amplified by the likes of Cambridge Analytica, which manipulated a highly gullible electorate – was that the election should be viewed as “a referendum against the ICC”. Part of the pact was that if the duo won the presidency, Uhuru would rule the country for ten years and then hand over to Ruto for the next ten years. In other words, Jubilee – their coalition party – would rule Kenya for the next two decades.

But maybe promising to honour a deal was not part of that deal. That Faustian pact has been broken. Ruto has now been relegated to the sidelines following another Faustian pact called the Building Bridges Initiative (BBI) that has brought Raila into the Uhuru fold, and which has resulted in an orchestrated assault against Ruto. Some might say that it is Kikuyu privilege and hegemony reasserting itself by coopting dissent. Others says it is a way of healing past wounds and uniting a country fractured by political divisions and disillusionment. Only time will tell which scenario will unfold.

Unfortunately, this pact might lead to more, not less violence. The government’s unreasonably aggressive response to Sudi’s comments, complete with police raids on Sudi’s home, and the open defiance of Sudi’s Kalenjin supporters, who threaten to go to war to defend their leader, suggest that we might be on the brink of a civil war. As one Kenyan on Twitter wryly commented, BBI has turned into a “Burning Bridges Initiative”.

The “handshake” between Uhuru and Raila, instead of easing tensions, has created different forms of polarisation. Ruto’s Kalenjin supporters feel betrayed. Opposition and civil society activists who would have come to Sudi’s defence are now taking sides; those who might have defended his right to free speech are now silent because speaking up might be construed as siding with Ruto. These fractures are most evident on social media.

Let us be very clear on one fact, which somehow gets conveniently brushed under the carpet. The 2013 election was premised on fear. Fear that if the Kalenjin and the Kikuyu do not unite, there will be a constant threat of violence and mass displacement of Kikuyus in the Rift Valley. Fear that historical injustices will resurface as a rallying cry during elections – a scenario that neither the Kikuyu nor the Kalenjin elite want because both have blood on their hands.

Although many analysts insist that the UhuRuto victory was simply a mathematical probability, in that it united two of Kenya’s largest ethnic groups into one formidable voting bloc, thereby outnumbering the opposition, some believe that the alliance between the two politicians was based more on primal instincts that had to do with self-preservation vis-à-vis the ICC, and the general fear in the country that the 2013 election would be as bloody, if not more, than the 2007one, as the issues that turned Kenyatta’s Kikuyu ethnic group against Ruto’s Kalenjin in 2007/8, and vice versa, had still not been resolved.

“Though tribe was the watchword in this [2013] election, their alliance, and their victory, was nationalistic, not tribal,” wrote James Verini, a Foreign Policy contributor based in Nairobi. “Their unspoken but resounding message was this: Yes, we killed. We killed for you, for Kenya. And we’ll kill again. It’s the most seductive platform in politics.”

At that time, anti-corruption crusader John Githongo said that the wounds of the violence in the Rift Valley – the site of most of the ethnic conflicts that have taken place during every election cycle since the first multiparty elections in 1992 – had still not healed, despite the public hand-holding and hugging among the Jubilee Alliance’s leaders. “Those who doubt his [Ruto’s] grip and the extent of his leverage need only consider the fact that despite the alliance of ‘peace’ and ‘reconciliation’ between the Gikuyu and the Kalenjin that now prevails, Rift Valley IDPs are not racing back to farms from which they were evicted in 2008. All of us know, quietly and without too much fuss, that we aren’t even close. It is such inconveniences that interrupt the ‘move on’ narrative for now,” he wrote in African Arguments on 22 May 2013.

Breasts in the Kenyan imagination

The Faustian pact between Uhuru and Ruto, and now between Uhuru and Raila, has lessons for Kenyans. In the classic German legend from which this pact gets its name, Faust is a highly successful but dissatisfied man who makes a pact with the devil, exchanging his soul for unlimited knowledge and worldly pleasures. By selling his soul to the devil, Faust is condemned to “The Eternal Empty”. However, female spirits of the earth intervene on his behalf and forgive him for his foolish mistake. Faust suffers some tragedies because of his folly, but in the end he is granted redemption and his soul ascends to heaven in the presence of God and the Virgin Mother. (One moral of the story: female energy is more powerful than the devil.)

We might be tempted to believe that the attacks on Sudi and his ilk are invoking female power. The fact that so many Kenyans (including elderly Kikuyu women who have threatened to strip in front of Sudi) have come out in defence of Mama Ngina’s breasts might suggest that we have reached a Faustian moment. Or perhaps we have evolved into country that actually cares about women and their dignity.

But let us not fool ourselves. For one thing, Mama Ngina, arguably the richest woman in Kenya, is hardly “Wanjiku”. I do not recall her ever defending the rights of poor Kenyan women, or women in general. Two, we are not invoking female energy here to seek redemption. If Kenyan politicians, including Sudi, really cared about women, the two-thirds gender rule would have been enforced in parliament by now.

What we are doing is weaponising the former first lady’s breasts. And sexualizing them, which is very un-African. As Sylvia Tamale writes in African Sexualities, African women’s sexualities were the antithesis of European mores of sex and beauty. Traditional African women had no problems displaying their breasts because breasts in African culture were not objects of sexual desire or titillation; they had one primary purpose – feeding an infant. So talking about breasts was no different from talking about a nose or a leg. If Sudi had “insulted” Mama Ngina’s ear, would we be so upset? The African breast became the object of forbidden fantasy and fetishisation during colonialism when Christian missionaries began their “civilizing mission” in Africa.

In fact, in certain African societies, nakedness was associated with defiance. The Kenyan mothers of political prisoners who “cursed” the Moi government in the early 1990s by stripping at Uhuru Park – because seeing your mother naked is considered a curse in certain Kenyan communities – were not displaying their sexuality; they were displaying their anger. They were defying Moi. Kenyans with a political conscience saw them as heroines. In fact, these mothers will forever remain as symbols of defiance in the annals of Kenyan history.

Maybe now is the Faustian moment when positive female energy can be invoked, not to redeem those who have made selfish pacts, but to take Kenyans down a more enlightened path.