Kamala Harris and the Politics of Race in America 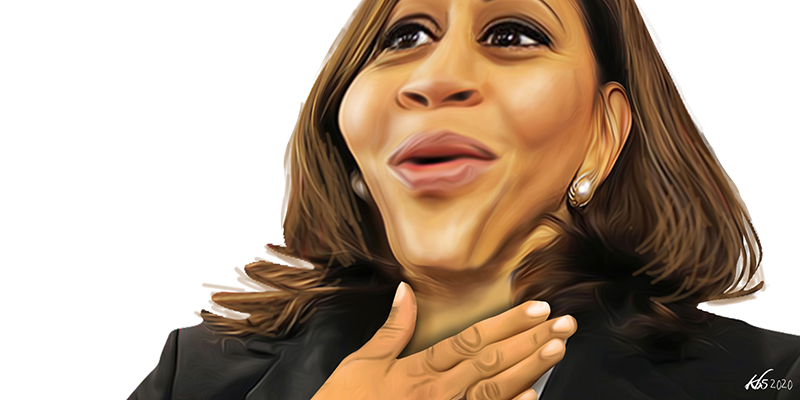 Many people do not know what to make of Kamala Harris. They don’t quite know whether to see her as black or Indian. Joe Biden’s presidential running mate has confused both Indian Americans and African Americans in the United States. Her mixed parentage – an Indian mother and a Jamaican father – has led to a situation where both groups want a piece of her but do not really know where to place her.

It’s sort of like what happened to Barack Obama in the initial stages of his presidential campaign, when Obama’s mixed Luo/Kenyan and white American parentage led many African Americans to wonder whether they could really claim him as theirs (though Kenyans had no qualms about calling him “the first Kenyan president of the United States”) and whether he had the credentials to qualify as an African American given that his ancestors has not been brought to America from Africa as slaves. In the end, African Americans embraced Obama and he ended up being the first black president of the United States.

The question of who qualifies as an African American or “black” person was muddied even further by the New York Times and other media organisations, which in responding to the Black Lives Matter movement, decided to revise their style guides and to capitalise the “b” in the word “black”. (In the Western world, a person is categorised as “black” even if the bulk of his or her genetic composition is made up of white genes; just one black gene in his or her ancestry is enough to qualify him or her as black.) The New York Times stated that this decision was made because the newspaper believes that an upper case “B” “best conveys elements of shared history and identity, and reflect our goal to be respectful of all the people and communities we cover”.

So all people who have links to Africa (as does Kamala’s Jamaican father) are Black. Black people in Africa are also Black. “People of colour” (Asians, Latinos and all those who are not white) can also claim Blackness when it is used in opposition to whiteness in the context of racialised America. Being Black is not just a recognition of shared heritage, but also of shared oppression.

But if the word “Black” is being capitalised, shouldn’t the word “White” be capitalised too? And does capitalisation denote some kind of recognition? In fact, why should racial categories matter at all? Aren’t they reactionary, “one of the most banal and vulgar ways to think of humanity”, as Ralph Leonard, a British-Nigerian writer, posed in an essay published in UnHerd?

Leonard says that capitalisation is merely a cosmetic change that does little to topple racism in America:

The real problem with uppercasing racial categories is that – like many of the symbolic actions that have followed this “racial awakening”, from toppling statues to woke rebranding by corporations [in the wake of the Black Lives Matter protests following George Floyd’s death at the hands of a white police officer] – it creates the illusion that wide-ranging change is “finally” happening. But real progress will only occur when the material conditions of black Americans has improved, and when laws and institutional practices that empower police to brutalize citizens have been overturned. In other words, the prize is not symbolic concession, but radical social transformation. The former is easy and superficial; the latter is hard and substantive.

How Indian is Kamala?

But I digress. Now back to Kamala Harris. Is she black or brown? And does it matter?

Her biographical data states that Kamala Devi Harris was born in Oakland, California, on 20 October 1964, which means she is 56 years old. Her mother, Shyamala Gopalan, was a cancer researcher from India, and her father, Donald Harris, was an economist from Jamaica. Her parents met at the University of California at Berkeley when they were pursuing their graduate degrees. They both shared a passion for the civil rights movements. They married but then got divorced when Kamala was just seven, and so Kamala and her younger sister were raised by their mother.

Kamala ate South Indian food, such as idli and sambar, at home. Her mother wanted her daughters to be independent, and often encouraged them to be strong-willed. She also made sure they had links with India. Kamala visited India often as a child and was heavily influenced by her maternal grandfather, a high-ranking government official, and her maternal grandmother, an activist who taught poor Indian women about birth control.

After high school, Kamala attended Howard University, the prestigious black university in Washington DC, where she studied political science and economics. She then joined law school in San Francisco. She rose high in the legal profession, first becoming District Attorney of San Francisco and then Attorney General of California. In 2014, she married Douglas Emhoff, a lawyer who also happens to be Jewish.

If Joe Biden wins the US presidential race this year, Kamala will become the first woman, the first African American and the first Asian American to be the vice president of the United States.

African Americans have embraced the black side of Kamala, much like they did with Barack Obama. But it is the Indian in her that has got a lot of people, especially Indians, rattled.

Normally, Indians are quick to adopt people of Indian origin or ancestry who do well abroad or in their adopted countries. For instance, they tend to see Sanjay Gupta, CNN’s handsome medical correspondent, as Indian, not American. Though reluctant to accept that he was gay, they proudly embrace the late Zanzibar-born British singer Freddie Mercury (previously known as Farrokh Bulsara), whose parents were Indian Parsis. They rejoice in the fact that Boris Johnson appointed Priti Patel, a woman of Indian origin whose family moved to the United Kingdom from Uganda in the 1960s, as Home Secretary (even though her regressive immigration policies might actually make it harder for people like her parents to emigrate or get visas to the UK). But when it comes to Kamala Harris, Indians don’t quite know how to claim her.

The Indian media is awash with articles with headlines such as “How Indian is Kamala?” An article published in India Today noted that Kamala’s mother had a strong South Indian accent, which cost her many promotions. It also said that Kamala’s walks on Chennai’s beaches with her maternal grandfather and India’s democratic culture had a profound impact on her thinking.

But questions are being raised about whether Biden’s running mate is Hindu enough. (As a child, Kamala went to both a Black Baptist church and a Hindu temple.) In Narendra Modi’s India, this question was bound to come up. (Incidentally, Kamala, also spelled Kamla, is the Hindi and Sanskrit word for “lotus”, which also happens to be the symbol of Modi’s Hindu nationalist Bharatiya Janata Party, or BJP.)

Some Indian commentators have asked why Kamala is so reticent to claim her Indian (read Hindu) identity while being so vocal about being Black. Is it because this way she can garner more votes? (African Americans outnumber Indian Americans in the United States by a huge margin.) After all, Kamala was closer to her Indian family than to her Jamaican one. If she identified as Indian, they argue, she would have a better chance of strengthening diplomatic ties between India and the United States.

A question of loyalty

The question, inevitably, boils down to loyalty. Will Kamala be swayed politically by her Indian roots or will she stay true to American interests? It is a question I have also been confronted with, and which I find quite disturbing in a multiracial and multiethnic society like Kenya. I remember a senior adviser in the Mwai Kibaki administration telling me that I could never be appointed in the Kenyan government because it would be assumed that my loyalty is to India, not to Kenya, even though I am a Kenyan citizen. (In Kenya, it seems, small ethnic minorities are presumed to be non-Kenyan until they can prove otherwise.)

Incidentally, this same Kenyan adviser later emigrated to the United States. I have often wondered if his loyalty is being questioned there. Of course, I found his reasoning to be absurd. I was born in Kenya. My great grandfather came to Kenya in 1897 and never went back to Lahore (which was then in British India but which became part of Pakistan in 1947, which means I have no ancestral home left in India). My father was born in Nairobi (River Road, to be precise). I have held only one citizenship – Kenya’s (though to be honest, I have often wondered whether my life would have been different if I lived in India, where I would not be a minority, and where I would never have to explain myself.) I speak three Indian languages, love Indian food and enjoy Indian movies. Does that make me less Kenyan? My husband’s father was Malawian and his mother was Kenyan. He was born in Kenya and has never visited Malawi. Does that still make him Malawian?

Is obsession with ancestry and heritage healthy, especially in multiethnic societies? Shouldn’t we be focusing on what Kamala Harris stands for and is committed to instead of her skin colour or parentage? While her ascent to the vice presidency will be symbolically important for “people of colour” in the United States and around the world, her blackness and femaleness do not guarantee that she will champion progressive policies that benefit black people and women. For instance, more people were deported from the United States under the Obama administration than in any previous administration. The Indian Prime Minister, Indira Gandhi, enforced a State of Emergency in her country in the 1970s that clamped down on dissenting voices. Her counterpart in Britain, Margaret Thatcher, clamped down on labour unions, which hurt working class men and women.

As one Asian American woman stated on Twitter, “I find it surprising how many people find it hard to define Kamala Harris’ identity. It’s easy. She’s American. She is Black. She is of Indian and Jamaican heritage. She is not ONE of those things. She is All of those things”.

Americans would do well to remember that and focus instead on what Kamala Harris stands for, and on whether her brand of politics will positively transform the lives of not just women and black people in the United States, but of all Americans.