Food and Leadership: The Scarce Ingredients of Survival in These Corona Times 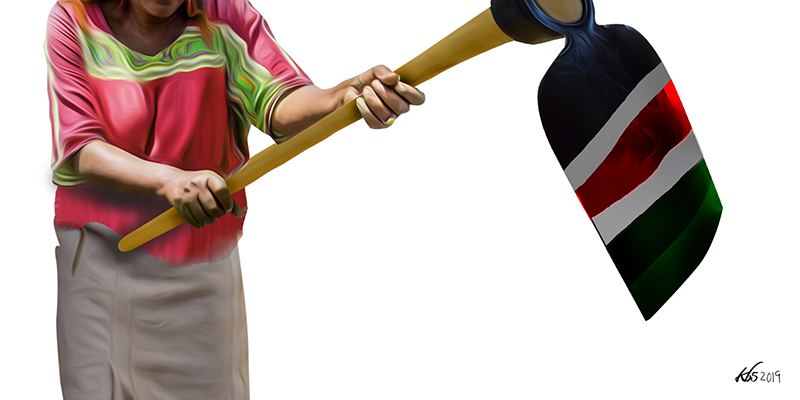 Paul closed his shop, unsure of when he would resume the tailoring business because it dawned on him that unlike food, his clients will not order clothes to go put on in the house. Heading home, he walked past mama mbogas chopping vegetables, boda bodas traipsing the narrow roads of the informal settlements and the euphoric sounds of children playing; seemingly oblivious to the looming crisis. He arrived to find that his wife, a kindergarten teacher at a low-cost private school, had been laid off with no salary henceforth.

On 15th March 2020, the couple listened as the Kenyan government issued a directive requiring the closure of all schools to prevent the escalation of COVID-19 infections. The government then enforced a dusk-to-dawn curfew and he, a tailor, lost most of his clients. It took a few days for them to run out of food like millions of others who work in the informal sector and were affected by COVID-19-induced curfews and lockdowns around the world. Paul and Lucy, with 4 children and no income, represent scores of Kenyans who are struggling to eke out a living and whose lives the pandemic threw into disarray.

Fortunately, Paul’s family and 6,000 others are partners with Food4Education, a social enterprise that “provides subsidized nutritious meals to primary school children to improve nutrition, end classroom hunger and improve school attendance and performance”; their mission reads. The Food4Education was founded by Wawira Njiru, a young Kenyan nutrionist and food scientist and the first ever Global Citizen Prize winner because of her work with Food4Education.

There are many young Kenyans, and many more around the youthful continent of Africa, who without obligation to do so are emerging to offer leadership during this COVID-19 crisis. In these contexts, mutual aid systems with more intimate knowledge of their contexts, are moving more rapidly in response to societal needs in more direct and appropriate ways than big international agencies. Mainstream leadership analysis tends to focus on established institutions and government in times of crisis and to undermine the agency of leaders emerging from unconventional zones of influence. This piece is an exemplar of leadership emergence during a crisis and how the Food4Education team did it.

There are many young Kenyans, and many more around the youthful continent of Africa, who without obligation to do so are emerging to offer leadership during this COVID-19 crisis.

A slight peek into Paul, Lucy and Wawira’s world reveals that: 40% of African and 26 % of Kenyan children suffer stunted growth; children attend school for an average of 6.3 years. As contributors to food for education industry, Wawira and her predominantly youthful team keep thousands of children in school by serving approximately 10,000 meals a day. Each child is issued with a smart wristband linked to a virtual wallet into which parents deposit money. This Tap2Eat innovation enhances accountability and efficiency in their operations.

COVID-19 inspired school closure brought with it rumors of a potential lockdown that led to individuals stocking up on the necessities. At the time, the media was fraught with speculations from experts detailing how COVID-19 would ravage Africa and leave scores dead in its wake. Wawira was deeply perturbed. How would she ensure that the families survive this pandemic? On the other hand, because of the strenuous nature of her work, she had been anticipating the regular school break. Despite her characteristic vitality, energy and joie de vivre she needed the respite, albeit for a while. She looked forward to cozying up, diving into the latest social media frenzy, and perhaps watching ‘Tiger King’ on Netflix. But the looming crisis of a pathogen would not allow her this luxury.

Wawira’s parents instilled in their children the value of education and especially its usefulness in seeking solutions to societal challenges. It is this looming crisis that unsettled her and a constant perturbation about the children’s welfare. Even more distressing was finding out that over 2,000 parents who worked at a local factory had been dismissed due to fears of the COVID-19 economic crisis. During the normal school breaks, parents continued to earn money and would afford the subsidized meals; however, COVID-19 had now plunged Food4Education into a gargantuan conundrum. Soon after, Wawira’s phone was flooded with pleas from families in situations much like Lucy and Paul’s. What she had hoped would be a short recess turned out to be the most intensive season for her and her team who had spent years building mutuality with the community.

Wawira made a point to call and visit parents and their stories were heart wrenching. Many were on the brink of devastation, broke and uncertain especially since there was no end in sight to their predicament. Wawira’s own grocery shopping trips became unbearable and she was guilt-ridden imagining that numerous families were going hungry. Social media presented copious accounts of people in similar situations around the world responding to the looming food crisis like in India and Zimbabwe. As she waited for the ‘adults in the room’ to do something, she realised that the majority of those responsible for state responses were caught up in the usual bureaucracy, fear and confusion as they watched the COVID-19 story unfold around the world. Wawira and her team also procured more foodstuff in case the food prices continued to soar. Floods and locust invasion were already threatening food security in the country and East African region so COVID-19 appeared on the scene like the guest that arrives late to the party. For many it was merely in the et cetera of disasters.

The Food4Education was founded by Wawira Njiru, a young Kenyan nutrionist and food scientist and the first ever Global Citizen Prize winner because of her work with Food4Education.

Food4Education worked around the clock to supply foodstuff to the affected families. Armed with data from the Tap2Eat system, they took the government-recommended precautions and started visiting families’ homes and came face-to-face with some of the coping mechanisms. The team installed hand-washing stations and enforced physical distancing rules for everyone who turned up. Barely a month into the intervention, the team had served a total of 1,000,000 meals. Food4Education has a target of 1.5 million meals served during this period and then resume the partnership with parents once schools reopen. Paul and Lucy, like thousands of other families, received packages of rice, beans, and maize flour enough for several days’ consumption. Paul began sewing face masks – a basic requirement during the pandemic that rapidly morphed into fashion accessories – while Lucy helped with selling the masks. Other stories like Paul and Lucy’s continued to trend on #FeedingThroughCOVID19.

For students of leadership, especially during crisis, Wawira and her team are an exemplar of how leaders emerge. ‘Funmi Olonisakin, a Professor of Leadership Studies, posits that “crisis is a leadership moment.” It is this crisis that allowed Wawira to emerge as a leader that goes beyond her normal work with her Food4Education team. Researchers and practitioners have shown the need to rethink leadership in emergency humanitarian response, however, Wawira’s story dramatically demonstrates how leadership is not about individuals alone; rather it is a process that involves teams responding to situations. The story impress upon leadership scholars that indeed situations make and break leaders. Impelled by the crisis, the Food4Education team took up the challenge as the ‘adults in the room’ observed from home. The enterprise’s leadership during the crisis has strengthened their relationship with their partners while the relationship between the public officials and the populace waned. The Food4Education story reveals that food, like leadership, is scarce during crisis; yet these are the very essential ingredients of survival.

Wawira and her team are part of the youth responding with an African solidarity ethos and emerging as leaders as the multilayered COVID-19 crisis unfolds. They have little support and visibility compared to big aid agencies. They lead as healthcare workers, innovators creating healthcare equipment, artists mobilizing society, policy analysts and humorous defenders of human rights. The mutuality that the local intervention leaders have nurtured with communities over time enables them to sustain influence during this crisis and other situations where they may emerge. They are a reminder that leadership is not a title, it is not contested in ballot box only and neither is it the preserve of those occupying certain positions in humanitarian aid nor those charged with specific institutional mandates. Leadership is a process; it emerges in everyday actions and decisions as we navigate COVID-19 and other crises. These young leaders are the dream of our ancestors realized today, rising despite encumbrances brought by the life-threatening pathogen!