The Upright Man: A Sympathetic Critique of Thomas Sankara 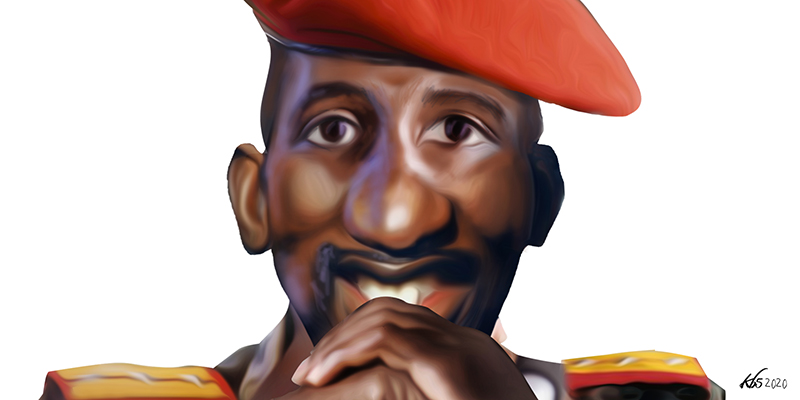 Over the past few years, several, partly scathing critiques of African political heroes have been published in larger works of history and ethnography. Thus the Patrice Lumumba of David Van Reybrouck’s Congo is a young, inspiring man whose fiery rhetoric outstrips his coalition-building  and governance capacity; the Kwame Nkrumah of Jemima Pierre’s Predicament of Blackness is simultaneously the exponent of a pan-Africanism that was merely “nominally powerful,” and a political leader “dependent” on colonial and industrial apparatus.

Although other, longer-lived revolutionaries from decolonisation and the Cold War saw their stars fade as their time in office extended, the reputation as a worthy presidential martyr enjoyed by Thomas Sankara, who led a short-lived revolution in Burkina Faso, has only grown. Since his death in 1987, he has been hailed as Africa’s Ché Guevara, and seen as a beacon of good and selfless governance. As with Ché, he’s turned into a beret-clad icon with an aura of cool that transcends the tedium of policy.

What shape might a sympathetic critique of Thomas Sankara take?

The life and times of the late Joseph Ki-Zerbo, a leader of regional independence movements originating from Haute (Upper) Volta (how Burkina Faso was known before Sankara took power), and the lifelong face of its leftist opposition, offers a clue. Prior to the 1980s, Ki-Zerbo, as a leader of the Voltaic left before, during, and after independence, was widely respected for his historical and analytic perspectives as well as his political participation, and his unwillingness to compromise his socialist principles for an opportunity of increased power. Haute Volta was rocked almost from the start by a series of coups, and Ki-Zerbo never found a government that he could join with a clear conscience.

At the time when a number of West African states gained their independence. Ki Zerbo had given up a career track in academia (he studied in Mali as well as at the Sorbonne and Sciences Po in Paris) to go to work in government and serve as a public representative: first as a civil servant for Sekou Touré in Guinea-Conakry, the first French colony to gain its independence. Ki Zerbo returned to Haute Volta before Touré’s regime in Conakry turned autarkic and self-consuming. Then, in Haute Volta, Ki Zerbo took up a seat on the opposition benches of parliament, working on things like education policy while the country was being rocked by a series of coups.

Sitting in his country’s parliament, and influenced by his experience studying with the Senegalese historian Chiekh Anta Diop, and by the ideas of the Malian ethnographer Amadou Hampâté Bâ, Ki Zerbo spent years leading the development of a primary school curriculum that tried to reconcile traditional Sahelian ways of knowing with Western-style, classroom-based pedagogy. Before he could do much with his curriculum, Sankara, a young army captain who had been given ever-more powerful portfolios in a series of putschist regimes in Ouagadougou, came to power in a coup in 1983 with the help of his colleague Blaise Compaoré. He quickly renamed the country Burkina Faso, or the Land of Honest Men, and ushered in a remarkable slate of policies: among other things, he broke the country of its decades-long dependence on imported foodstuffs, and put in place unprecedented policies promoting gender equality.

Sankara wore camouflage into office, but his policies harkened back to the heady and hopeful early days of Touré in Guinea, making it all the more surprising when Ki-Zerbo, fearing for his life at the hands of Sankara’s military administration, joined a stream of politicians and professionals who went into voluntary exile from the country.

The Sankara years were marked both by forthright policies and the political repression that led to the most talented members of the political and bureaucratic classes joining reactionaries and incompetents in flight abroad.

Four years into his revolution, Sankara was murdered in another coup; this one installed Blaise Compaoré, minister of defense and a one-time close Sankara ally, as head of state. Ki-Zerbo stayed away for as long as Sankara ruled, returning only after he was executed. The self-sufficiency, anti-corruption, and general moral rectitude of the Sankara years slipped rapidly into the past. Ki-Zerbo, no stranger to being outside of government, found little to like in Compaoré’s platform and regime, and resumed his status as leader of the principled opposition upon his return. In 2008, late in a book-length interview with René Holenstein, Ki Zerbo outlined the difficulties he had with Sankara.

Ki-Zerbo argued that by coming to power in another coup, and thus being required to be suspicious of everyone in the political establishment, including his ideological and partisan allies, Sankara ensured his own immediate failure, setting the ground for a continuation of the countercoups and crack-downs that had already become commonplace. In his view, what was needed was not a better coup-leader, but a turn toward realistic governance.

But Ki Zerbo also held up another figure as a hero he could get behind: the Burkinabé journalist, Norbert Zongo, murdered in 1998 by Compaoré’s army. Ki-Zerbo, no stranger to academic discourse, talks about Zongo as a member of the Gramscian civil society, noting that at the time, civil society declined to align itself forthrightly with the political opposition, preferring a stance of neutrality. That didn’t prevent Zongo, who got his start in the government-sanctioned press, from aggressively covering the excesses of the Compaoré regime, something he continued to do from within the country even after his own life was threatened. From his perch as founder and editor of the newspaper, L’Independant, he investigated the government. When in 1998, this meant looking into the torture and death of the chauffeur of Compaoré’s brother, Zongo and three others were assassinated by agents of the state.

It’s easy enough to see why Ki-Zerbo, who repeatedly declined opportunities to exercise political power when he thought he’d be joining administrations that didn’t operate in the long-term interest of the country, might prefer an outsider like Zongo to a cunning political actor like Sankara. And while Ki-Zerbo doesn’t say it himself, it’s possible to imagine that Zongo’s bravery in continuing his work from Ouagadougou even when he knew his life was in danger made the journalist someone he could look up to, having faced a similar challenge in his own career.

Over the last decade, repressive governments around the world have come to recognize the oppositional power of civil society, heavily regulating organizations, raiding offices, and arresting leaders, while painting civil society as a pathway for foreign influence. But in the 1990s, a journalist could still surprise the government and the opposition alike by doggedly pursuing his leads about government malfeasance, and publishing his findings far and wide.

The extent to which a person may agree or disagree with Ki-Zerbo’s critique of Sankara is likely dependent on context. Ki-Zerbo clearly thought that Burkina Faso was, in the mid-1980s, poised for a government that could include a variety of committed voices; furthermore that the rise of Sankara and Compaoré in 1983 set the stage for Compaoré’s nearly three decades of reaction and repression. But if an observer sees the entire last quarter of the 20th century as an insurmountable political dark night of the soul, then the shining example of Sankara, however quixotic it may have been in the moment, would show itself to be just the sort of light in the darkness that could demonstrate to later politicians and citizens what it means to be a leader of principle. The judgment that Sankara was a hero, then, rests in part on a deeper judgment as to what was possible in Burkina Faso in the early 1980s.