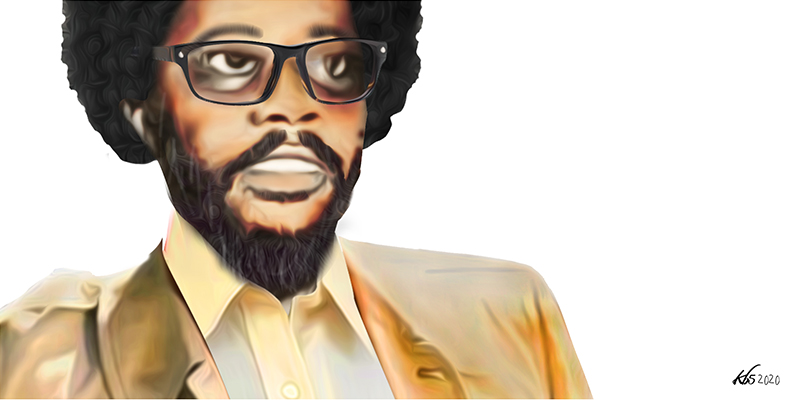 Between April and June of 1978, Walter Rodney, then already an important intellectual for his book, How Europe Underdeveloped Africa, was invited to teach a course, “One Hundred Years of Development in Africa,” at the University of Hamburg.

His hosts Rainer Tetzlaff and Peter Lock, two radical lecturers at the university, recorded the lectures and full transcripts were made in 1984, including the question and answer sessions with the students. The transcripts and recordings of the lectures are kept in the archive in Atlanta. Reading them now gives one the impression of an activist and thinker in astonishing form—engaging with challenging and wide-ranging issues, the continent’s history, slavery, independence, and projects of radical socialist development. Frequently interrupted by students to clarify a point or justify a statement, Rodney deals with complex issues of political economy and Marxist theory with sophistication and clarity, never losing patience, or his narrative thread. The transcripts and recordings also give a sense of Rodney’s own political development, reflecting on his activism, and his current work with the working class in his native Guyana.

The lectures are deeply thoughtful, referring back to his experiences in Tanzania (where he lived and taught from 1969 to 1974 before returning to Guyana) and the conclusions that he was drawing on the weaknesses of state socialism.

Rodney began by dispensing with the widely-held notion of the working class in Africa as an “aristocracy,” in some ways privileged in post-colonial state. As he explains:

These may seem like obvious arguments to us today, but they were not at the time. The Algerian revolutionary Frantz Fanon had made the point in 1961 that the colonial working class was one of the major beneficiaries of the settler state. In 1978 Rodney argued that this argument was now being advanced by the “petit bourgeoisie… who were trying to disseminate this idea that workers exploit the countryside.” According to Rodney, this was a self-serving point that could be used against wages claims and demands “for a larger share of the surplus which they produce.” These were not abstract arguments in an academic discussion, but justifications made in the organization of the Tanzanian state (and “socialist” and “capitalist” states across the continent). Julius Nyerere, the radical president of Tanzania, still in power in 1978 (he left the presidency in 1985), was fond of making such claims himself. Rodney explained: “if the workers ask for more, the bureaucratic bourgeoisie would reply, ‘You are getting that at the expense of the peasants’.”

On the role of the state in Tanzania, which Rodney had previously defended as a vehicle for socialist transformation, his attitude had become much more critical. After independence, the so-called official organization of workers was a farce, a process of co-option by the state—independent unions were vacuumed up into a state-controlled organization. However, in the strikes and occupations reported by Issa Shivji, Rodney’s friend and well-known Tanzanian socialist and writer in his 1976 book, Class Struggles in Tanzania, and noted by Rodney, there was a new politics in formation.

Reporting on the “workerist” turn in the factory occupations in the early 1970s, in Hamburg Rodney described, “We as workers are capable of running this enterprise more efficiently than the economic bureaucracy.” In direct challenge to the management of companies, workers were “making arguments that went beyond their own immediate material interests. They were carrying the class… to even higher levels by in fact posing the question who should control production.”

In these struggles from below celebrated by Rodney he saw a direct challenge to a state that had declared itself socialist, and the possibility of a new society based on that class challenge. Yet, there were serious obstacles. He explained:

Even though theoretically the Tanzanian revolution accepted a greater role for workers, when they made an important policy statement in 1973 called Mwongozo [a charter of workers’ rights, reviving the radical aspect of the government’s ujamaa or socialist policy]… the workers themselves tried to implement the rights that was supposedly safe-guarded by Mwongozo.

As has often occurred with initiatives from above, workers themselves attempted to implement the rights that were ostensibly enshrined in the official “Mwongozo” charter. Rodney records one of these cases:

In one very important instance, workers actually took over a factory and they didn’t take it over from the government, they took it over from a private owner… And they said we can run this factory which was a rubber factory, [Mount] Carmel Rubber Factory… They locked out the management and they were running the factory. And this caused the greatest excitement and fear on the part of the bureaucracy.

Rodney draws the vital and obvious conclusion, as did Tanzania’s political elite:

If workers were running one factory then maybe they will run another and another. And this doesn’t look too good for the economic wing of the bureaucracy… their whole rationale of production as a class would disappear if there was workers’ control… so they moved to crush those initiatives.

In other words, it made no differences what the complexion of the government’s rhetoric had been, the threat of these occupations and the possibilities for real transformation that they contained was the same. The strikes and occupations had to be stamped out.

Rejoicing at what the “bureaucratic bourgeoise” despised, Rodney goes on to explain to his audience, “What in English we call wild-cat strikes, [are] not strikes which the union initiates but strikes which come from below. The workers themselves decide on direct action.” The “unorganized” strike, not prearranged by trade union leaders, becomes the center of Rodney’s focus in these reflections. Yet it was not simply a strike, rather what the strike portends. Out of the action, away from the immediate material interests of the workers themselves, were the seeds of another society and power.

Yet these strikes raised important political questions and organizational issues and posed an uncomfortable dichotomy. So, the organized working class and the strategy of organizing workers was central but conversely, the action of unorganized workers with their spontaneous protests was vital to a genuine project of transformation. In Hamburg, Rodney was busy thinking through these issues.

Rodney argued that some sort of rehash of national liberation advocated at the time by the ruling party, TANU, in Tanzania was not enough. Nyerere, who attempted to revive the politics of liberation and “to reassert [the] liberation movement,” was likely to fail. Rodney was clear about this:

My feeling is that in spite of all the rhetoric, TANU has not been transformed, that it remains a nationalist party under the control of the petit bourgeoise… incapable of providing the basis for sustained socialist transformation.

In other words, socialist change required pressure from outside the ruling party and in opposition to it, much as Rodney’s Working People’s Alliance (WPA) was working against Forbes Burnham’s regime in Guyana. The regimes were profoundly different, but the essential class component was not. If working class struggle from below (in occupations and “wild-cat” strikes) was necessary in Guyana, it was also indispensable for the construction of socialism in Tanzania. To those who declared that there was something unique about Tanzania, Rodney was equally dismissive:

It is important to recognize that it fits within the general pattern, which we have been discussing so far by which the colonization process ended through an alliance of classes… but within this alliance the workers and the peasants never really had hegemony.

What we see in the Hamburg lectures is a shift in Rodney’s work toward the self-activity—the occupations and “wild-cat strikes”—of the working class, not as one of numerous players in the revolution, but as the central organizing force. A new state would not come about by an enlightened leader, but through the frenzy of a class in the process of knowing itself, and through what it alone was capable of creating. In this scenario, the existing national bourgeoisie, in Rodney’s words, and “their whole rationale of production as a class would disappear.”

Tragically the full development of this politics and its realization, with the coordination and leadership of Rodney and the WPA, was broken by his murder on 13 June 1980. In circumstances still not fully investigated, Burnham decided that Rodney must be eliminated, the unity he had helped forged between the Indian and Black working class, and the struggles he had led were simply too great a threat to Burnham’s hold on power.

He was on some kind of a mission … that he was ready to die for. Grounding with his people, living their life, eating their food, speaking their language, taking their concerns… His commitment was distinct for the cause of the poor.

Rodney’s turn to the working class, recorded in his Hamburg lectures, was an important moment in an extraordinary life.