Humour in a Time of Coronavirus

By David Mwambari and Awino Okech 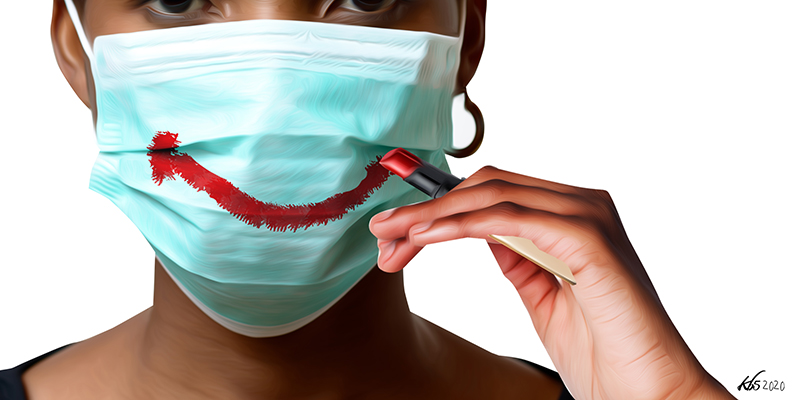 Social media has become a powerful communication platform, used by Africans on the continent and in the diaspora to engage on issues of common interest. In particular, it is used to spread a type of humour that is a form of critical commentary on contemporary issues, Twitter and—more recently—WhatsApp groups becoming conduits for memes, parodies or twitter threads that offer comic relief from the crisis at hand. Laughter is cathartic, a coping mechanism in the midst of crisis. Take Nigerian satirist Elnathan John’s hilarious rendition of a fictional Nigerian James Bond who struggles to succeed at his job because of visa issues. John offers an incisive critique of the prohibitive visa regimes that negatively impact Africans generally and Nigerians specifically. Or Siyanda Mohutsiwa’s #IfAfricaWasABar (what would your country be drinking or doing?) which explores the geo-political dynamics that shape African countries’ relations. Then there is Jim Chuchu’s 2019 parody of the New York Times advert for a Nairobi bureau chief that rehashed colonial tropes of a dark, dangerous continent that is fertile ground for the adventurous and ambitious journalist. Beyond the laughter, humour has the potential to catalyse analysis and mobilise diverse publics around socio-economic and political concerns. Through rumour, gossip, jokes, songs and euphemisms, politics plays out in the public view, but with a double meaning. It is argued that this coded, hidden transcript is always present in the public discourse of subordinate groups. Through humour, the oppressed speak.

Here we look at the three main ways in which humour serves as an avenue for a critique of class and gender relations, and of religious leaders, as African governments galvanise their countries in response to COVID-19. To begin with, the working class has used humour to rebuke the political class and the elites. With the emergence of the coronavirus, the proverbial 40 days that it takes to catch a thief have passed. As one unnamed poet put it, just one “sneeze” and African politicians are flown out to Europe or the United States for medical check-ups. With Europe as the epicentre of the global pandemic, the political elites in Africa have no option but to confront their failure to invest in equitable, quality healthcare systems. The key question now is: “Where will you go now since you did not bother to build local hospitals and the virus seems to be taking the rich first?”. In another stinging joke that takes aim at the middle class, a man who looks poor is crying and asking if he will die from an illness from abroad yet he has no passport. The passport, a signifier of the mobility of middle class Africans, in this case ceases to become a marker of “progress” and becomes instead a purveyor of problems. The problems generated by the economically and socially mobile often have a ripple effect on those whose mobility is curtailed by gaping economic inequalities. COVID-19 has been described as the great equaliser not because everyone can get it but because protecting yourself without securing the protection of others is no security at all. Dealing with the spread of the virus is not about protecting a few to the exclusion of the many. So long as the majority continue to be exposed to the coronavirus the wealthy are not safe. This is the equaliser. In this context, humour is used to re-ignite longstanding critiques of failed leadership. Jokes emerging out of a collective memory of ongoing struggles are used to “revolt” against states debilitated by grand corruption.

Secondly, a series of jokes, memes and videos circulating during this period have brought to the fore the reality of gender inequality and the pervasiveness of gender stereotypes as a driver of inequality. In these jokes, we see gender roles and stereotypes reinforced and often circulated without commentary. A few worth mentioning here include a photo of a man relaxing on a mattress on the roof of what looks like a modest house in a rural area. The photo implies that he is bored of being in the house with his family and chooses to be on the roof as he is constrained at home. A video clip shows a man calculating the cost of items brought home from the market by his wife, arguing that he has finally found time to check how much is being used at home. Images of children making the house untidy as they stay at home with their bored fathers have also been shared. Collectively, they normalise the sexist view that a woman’s place is in the private sphere while a man’s is in the public arena. An important commentary that underpins these jokes about men feeling locked in is a view of heterosexual relationships that construes them to be transactional in nature. These transactions are based on a neat and false dichotomy where women produce children, men provide money, women nag and constrain men’s freedom and there is little else in between. In one video, a man quickly chooses a second, unspoken, option when the first option presented is to go into quarantine with his wife and children. This video illustrates longstanding debates about the perception of marriage as a union that one must subscribe to but which men have a way out of at any given moment. Women on the other hand are required to stay within their marriages and work at them, demanding meaningful communication and companionship, which is viewed as a burden by their male partners.

A final subliminal message communicated in these videos is the issue of domestic violence. Violence against women as we know is not just physical but it can also be psychological, including controlling behaviour. What is passed off as a joke about budget accountability in the household is in fact indicative of potential or actual domestic violence normalised as men needing to see where their money goes.

Other videos offer a commentary on the prevalence of sexual violence in society. In one video, a group of men is praying for a sick woman in the theatrical manner employed in televised miracle healing sessions. They ask the woman, whom they are touching inappropriately, “what are you suffering from sister?”. In a soft, somber voice, she says, “I have coronavirus”, at which point the preachers run away. On the surface this could be viewed as a critique of charlatans who claim to have the power to heal. However, there is another story here, that of sexual abuse in religious institutions. In 2019, #ChurchMeToo and #ArewaMeToo emerged in Nigeria in response to sexual abuse allegations levelled respectively against the head of a Pentecostal church and Islamic schools. Similar charges against “men of the cloth” preying on children have been reported in Kenya, and not just within the evangelical movement; the Catholic church has faced longstanding charges of sexual abuse. The critique of religious institutions extends to a broader engagement with their loud silence on issues that impact citizens. This is the third category of humour we have analysed.

In an image showing four key West African prophets, there is an accompanying text that reads: “In the face of a real virus they are now quiet”. In countries such as Kenya, South Africa, and Central African Republic to name a few, the clergy and the church in general have in the past been a critical voice at specific historical moments. In Kenya, the role of clerics such as Timothy Njoya, David Gitari and Henry Okullu, who used the pulpit and took to the streets in support of the pro-democracy movement in the 1990s, is well documented. Archbishop Desmond Tutu is another notable example of liberation theology at work, where the purpose of religion and scripture is political and social transformation. The commentary in the image depicting silent church leaders, is a critique of a section of society that is often framed as being its “moral compass” but which falls silent when the immoral surfaces in the public domain—from sexual abuse, grand corruption, to irregular extensions of political term limits and extra judicial killings. Religious institutions are in most cases motivated by a desire to benefit from looted national resources and they are loudest when it comes to the regulation and control of women’s bodies. Their failure to be an effective “moral compass” in society is laid bare by weak health systems and poor infrastructure—education, water, transport—that are at the heart of the effective management of the spread of COVID-19. The rise of “religious charlatans” is a by-product of the decadence of the political class.

Humour, as illustrated above, has provided a much needed reprieve in the wake of the lockdowns, quarantine and social distancing measures occasioned by COVID-19. However, in laughter there is also an opportunity to examine where a society stands on specific issues. Humour in such moments as these has the potential to catalyse action against ills that have existed but which are now magnified by circumstances. The sharing of humour through social media mobilises communities which are ordinarily not engaged in professional civil society work or which are not to be found in “policy advocacy” spaces. However, humour can also be an avenue to sustain and reinforce existing biases in the society as is evident in issues of gender inequality. Ultimately we must ask, will the critiques generated by and through humour turn into demands for structural transformation or will society and its leaders laugh their way to their deaths, their coffins carried by Ghanaian funeral dancers?

Note: We have based our analysis on material we received through social media. However, it is often difficult to trace the origin of videos and cartoons that circulate on social media.