Out of the Ruins and Rubble: COVID-19 and the Fightback in Africa 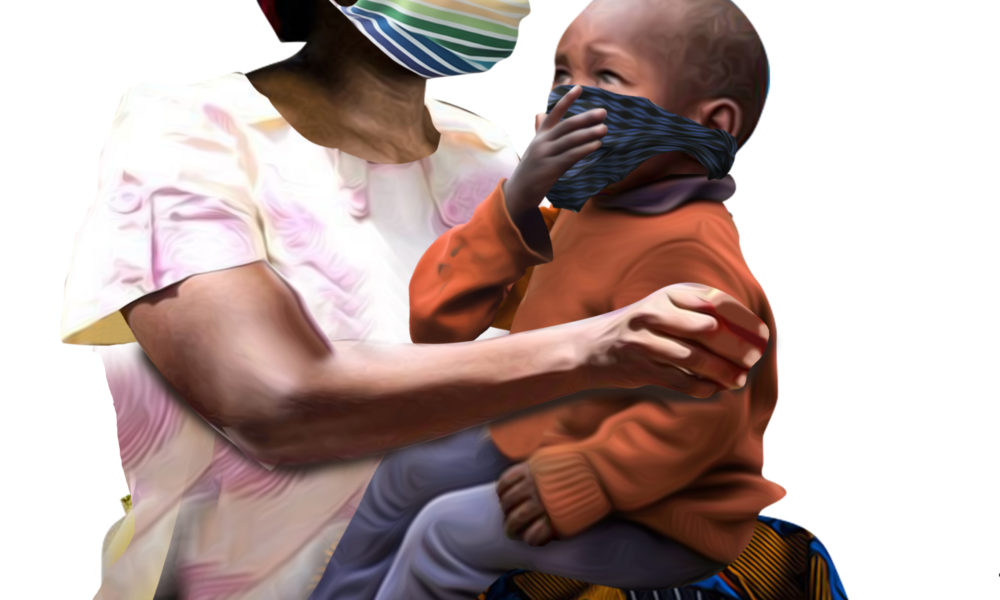 The good news first: On Monday, 6 April, the South African government began to roll out an ambitious programme of countrywide screening of the coronavirus infection. Mobile units and a corps of 10,000 health workers began screening and testing in the communities, with an intermediate aim of reaching at least 50,000 people within a week.

On 6 April, South Africa was also halfway through the scheduled 21-day lockdown that came into force on midnight of 26 March. Except for a few locations where residents flaunted the lockdown protocols, most people have been complying with the severe regulations.

South Africa’s 60 million people are only allowed to leave the house to do essential shopping for groceries or medicine, visit the doctor, or collect social grants. No allowance is made for outdoor exercise – an activity that even people in the European countries that are hardest hit by the pandemic still enjoy.

There have been reports of violent abuse that residents of poor neighbourhoods have suffered at the hands of the enforcement services, especially the police. From Day 1 of the lockdown reports, photographs and videos have been circulating of officers beating people. There is even one of officers shooting rubber bullets at people queuing at the entrance of a supermarket.

A group of people whose lives have been particularly affected by the lockdown protocols are the homeless, the approximately 70,000 people who live on the streets of cities across South Africa. They have been collected, more or less voluntarily, and accommodated in temporary facilities, some of them decently run, others dangerous mass encampments, such as the tented camp that the city of Cape Town has set up some 27 km outside the metropole for 4,000 street people. This is happening just as autumn temperatures have dropped over the past weekend to a wet and chilly 15 degrees Celsius.

The severe and cold South African winter is at our doorstep, and speculations are rife that with the peak of the pandemic in South Africa expected in early May, the lockdown may be extended, possibly until the end of June, or even longer. People in the poorest communities have been bravely patient thus far, although many have lost their income, especially those who make a living day-by-day – the domestic workers, the waste-pickers, the informal traders who sell much of the fresh produce in the townships, and many others. There is hunger and the longer the lockdown will last the hungrier the marginalised majority of the world’s most unequal society will get.

The tremendous efforts of South African civil society have continued. There are a remarkable multitude of community initiatives that provide practical support, from soup kitchens and food baskets to hygiene and face mask-making.

Beyond that, an impressive C19 People’s Coalition of over 190 organisations has been built over the past couple of weeks that is running campaigns for social solidarity under the banner “Stay Home. Stay Safe. Demand a Just Response to COVID-19!” The C19 Coalition has put together a wide-ranging programme of action that includes income security for all, specifically the extension of social grants, general easy access to water and sanitation, and food security. The Coalition calls for the appropriation of essential private facilities for public use during the crisis, for free and open communication, and for proper training and resources for community health workers. It also asks that the inequalities within the country’s educational system be considered in the move to remote learning.

With all this, the focus is on grassroots organisation and mobilisation, including the identification of strategies to divert violence, especially domestic violence, in the country’s communities and homes. The C19 programme programmatically articulates: “How each of us responds to the COVID-19 pandemic will determine who we are as a society. The better we respond now, the better we will be after the pandemic…Our response must be just, equitable, and redistributive if we are to meet the needs of all our people. In times of physical distancing, social solidarity is key.”

Heike Becker is an activist and teacher of social and cultural anthropology at UWC in South Africa. Her work and activism explores culture and politics and focuses particularly on popular culture, digital media and social movements in southern Africa. Heike is a regular contributor to roape.net.

One basic point I must make is that the COVID-19-induced lockdown measures and effects in Nigeria are not uniform. For example, in Oyo State, South West, Nigeria where I live, only night life is curtailed by the imposition of the curfew between 7pm and 6am. So people are allowed to carry on their activities normally outside these hours. However, because of the total lockdown announced by the Federal Government and imposed on Abuja, Lagos and Ogun State, activities in all other states are affected to one degree or another as interstate movements are prohibited.

On a general note, the lockdown has meant unprecedented hardship, hunger and anger. In some cases, ordinary people have been compelled to defy the lockdown as they are compelled to go out in search of work. Some states share raw food and bread but on a limited scale, but frequently to such a limited extent that young people and women have been seen protesting in the streets against these “food rations”. One group of protesters complained that only one loaf of bread worth two hundred Naira (about 45 pence) was given to 650 people living in about 240 houses on a particular street. Young people angrily turned the bread into footballs. In another location in Lagos, the food rations, similarly pathetic in quantity, were distributed, to widows and old women. Community-based health and rights organisations have been unanimous in making demands for government provision of water, food and drugs to ensure a successful lockdown.

The Federal Government says it has set aside huge sums of money to fight COVID-19. But, in reality, it would appear that little is being used for this purpose. Recently, it was announced that the Federal Government would take US$150 million from the sovereign wealth fund and share it among the different levels of government to fight the virus It did not provide any information about what the money would be used for.

While public offices are shut, workers at Dangote are exempt from the lockdown. The workers are angry that adequate protection is not being made available to them. Aliko Dangote is West Africa’s wealthiest businessman, who runs the Dangote Group that employs thousands across Nigeria who work, principally, in his cement business.

In response to the defiance of the lockdown by hungry and angry poor people, some state governments, such as Ekiti State in the Southwest and Kaduna state in the Northwest, are relaxing the lockdown, and are allowing movement on some days of the week to allow people go to the market to buy foodstuff.

But in situations where people do not earn salaries, there is hardship. Even market women are complaining of little activity. In Nigeria, there are no social security schemes to take care of the unemployed and the elderly. People are saying that in the absence of public support, the hunger virus is no different from COVID-19.

Femi Aborisade is a socialist, writer and lawyer based in Lagos.

The fight against COVID-19 is as much a class struggle as any, perhaps even fiercer. The pandemic is knocking on the doors of the continent. The ravages of five centuries of capitalist barbarity and its sycophant accomplices has left us most vulnerable. In Tanzania, we have been made doubly vulnerable as floods are devastating some regions and rendering people shelter-less. I shudder to think what the consequences will be. But we must continue to hope and struggle as long as we live.

We are going through trying times. Humanity is on trial. This is the time when the worst and the best in us comes out in ways that we could not have imagined in normal times. We are used to saying “the personal is political”. Now with the “social is personal”, the personal takes precedence, the social disappears. “Me first”, “my (family) first” overwhelms the “us”.

These are the times when “keep sane”, “stay sane” become words of affection. Yet what is at stake is our humanity itself. We don’t say “be human”, “stay human” for human is social and social is a distant second. Social is moral. Sanity is rational. And we are all children of Enlightenment rationality.

The chickens of capitalist modernity are coming home to roost.

But all is not bleak; it never is for we are humans and do not have the hide of a buffalo to be unaffected by human suffering. So, health workers are in the front line fighting the pandemic. Cuban doctors travel over the seas to save lives of fellow human beings while putting their own lives in danger. The Chinese send shiploads of medical kits to Italy and Iran in the people’s war (truly a peoples’ war) against COVID-19 (while Trump tightens the screws of sanctions against Iran and the European Union mulls over financial instruments that would secure its loans to a fellow EU member). Humanity is not so bereft of humanness. No, it is not.

Julius Nyerere rhetorically asked in his article “Usawa wa Binadamu” (Human Equality) what it is that makes us all equal when we are so unequal in every respect. His answer: it is our humanness. Nyerere’s equality is human equality (moral). Enlightenment’s equality is legal equality (rational).

Why am I saying all this? I’m saying it because in such times of crisis our Enlightenment values – which inform the age of (capitalist) modernity – starkly reveal themselves in all their nakedness. And they are barbaric to the core!

Will this pandemic teach us that humanity is crying out for a new civilisation, a civilisation whose centre is the human being, a social being with innate humanity, not an individual subject of the capitalist state who oozes out barbarity, greed and selfishness from every pore? People before property maybe sums it all up, though perhaps not sufficiently to drive our souls – nonetheless it is a good approximation to lead us on.

As I read the messages of love and warmth, of hope and solidarity from the continent, I cannot stop reflecting on how capitalist barbarity has destroyed our humanity, yet how our underlying humanness is kicking in and that is what makes life.

In the name of struggle and solidarity, let us shout and scream:

The Revenge of Nature

For over five centuries
Capital has devastated nature and human nurture.
Now nature is taking its revenge.
Once again capital will shield behind stimulus packages
While the working poor will die out packed like sardines in their slums.

Hope we should not lose, to despair we shall not surrender,
The struggle must continue.
We, the People of the World, will build a New Civilisation
Out of the ruins and rubbles of corona
We shall never again allow capital to ruin our homes and hearth
To build their domes and malls

Never again revolution will be an episode
We will make it permanent
It will be the daily ablution
Five times a day
To wash away the sins of barbaric capitalism.

Issa Shivji taught for years at the University of Dar es Salaam’s Public Law Department, and has written more than twenty books on Pan-Africanism, political economy, socialism and radical change in Africa. He is a longstanding member of ROAPE.