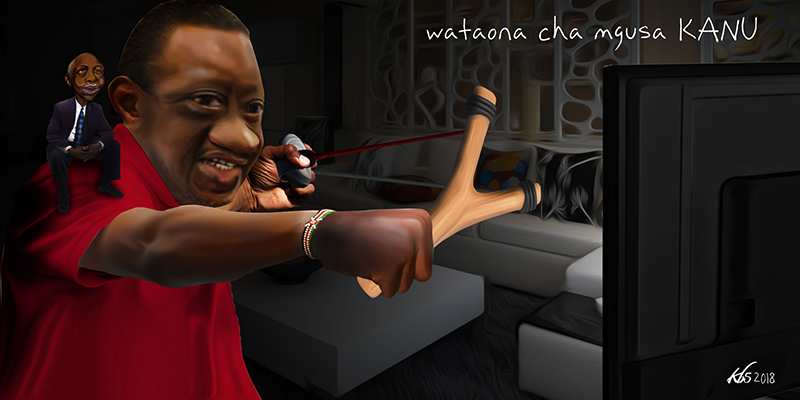 “Government will no longer be ran on the whims of individuals. The era of roadside policy declarations is gone.” Mwai Kibaki, Inauguration Speech, 30 December 2002

During his recent visit to Mwea, the rice-growing region of Kirinyaga County, President Uhuru Kenyatta directed the Ministry of Agriculture to increase the price of rice paddy from Sh45 to Sh85. It is an intriguing directive. The Ministry of Agriculture does not have the authority to set prices. Although there is a state-linked mill, Mwea Rice Mills—jointly owned by a farmers’ cooperative and the National Irrigation Board—that could implement the order, the bulk of the paddy is sold to private millers. As it happens, the state-owned mill has been in limbo since November last year, when the management was sent packing on allegations of mismanagement and fraud. Moreover, farmers produce different varieties of rice, which command different prices in the market. It is not clear whether this price applies to all varieties, or even whether it applies to all rice-growing schemes in the country, or if it is exclusively for Mwea farmers. 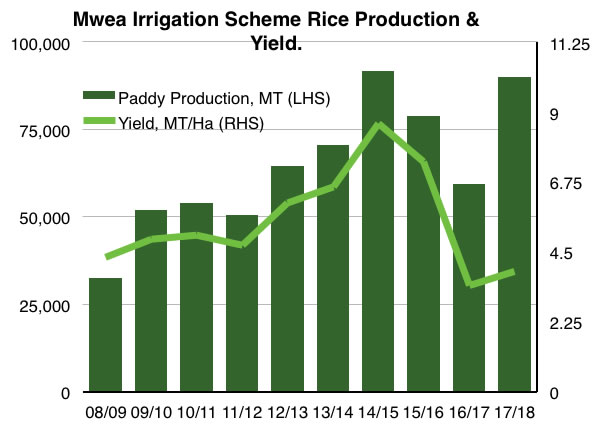 Kenyatta also announced the establishment of a Sh500 million revolving fund for buying paddy from farmers. The most recent figures published by the Kenya National Bureau of Statistic’s Economic Survey s how that the country produced 112,000 tonnes of paddy in the 2017/18 season, of which 90,000 tonnes were produced in Mwea alone. At Kenyatta’s price of Sh85 per kilo, the fund would purchase 5,900 tonnes, just over 5 per cent of the harvest. Clearly, Sh500 million cannot even begin to finance the directive. 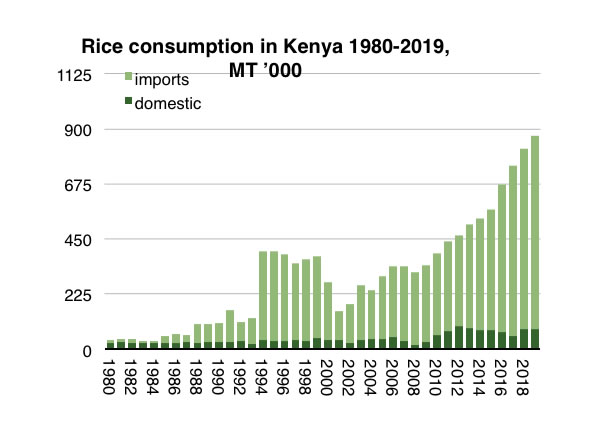 In effect, the claim that imports are hurting rice farmers is populist political nonsense. To satisfy the current consumption, rice farmers would have to produce ten times what they are producing now. Not only is the Kirinyaga Governor an economist (with a master’s degree in policy analysis), she was previously the cabinet secretary for economic planning. One would expect someone with such credentials to have a good grasp of the rice sector given its importance in her county. Power does strange things to people.

What are the implications of buying paddy at Sh85? Paddy accounts for 64 per cent of the retail price of domestic rice. Milling accounts for 16 per cent and distribution (transport, storage and trade margins) for the remaining 20 per cent. This data is given in an academic paper published early last year. The study reports an ex-factory price of Sh102 per kilo, which is an average for all varieties, and Sh125 for the higher-priced aromatic basmati/pishori that Mwea is famous for, fairly close to today’s prices. Nice Millers, who describe themselves on their website as the largest miller of Mwea rice, quote Sh130 per kilo.

To satisfy the current consumption, rice farmers would have to produce ten times what they are producing now

Paddy is converted to rice at a ratio of 5:3, that is, five kilos of paddy produce three kilos of rice (or 1.67 kg of paddy to get 1 kg of rice). The Sh130 ex-factory price quoted by Nice Millers suggests a paddy price in the order of Sh54 per kilo or Sh90 for the 1.67 kg of paddy required to give one kilo of rice. The presidential decree price of Sh85 will increase the cost to Sh142 per kilo of rice, higher than the quoted price for milled rice. If the millers and traders pass this increase on to consumers, Mwea pishori rice will go up by Sh62 a kilo. Using Nice Millers advertised ex-factory price of Sh130, it will retail at Sh.192 per kilo.

Will it sell? My quick unscientific survey of rice prices on the internet suggests that there are three price bands: high, middle and low, which should not come as a surprise since markets respond to the different customer segments. The high-end rice is currently priced at Sh150-170. This consists of domestic aromatic rice and some premium imported products (e.g. Pakistani “super basmati parboiled Grade 1. Parboiled refers to rice that is partially boiled in the husk before it is milled, which makes processing and preservation easier, and is also said to improve nutritional value). Mwea pishori is the most expensive rice in the category. The middle market products are in the Sh120 to Sh140 range. These include Tanzanian pishori and other non-premium Asian imports, mostly Pakistani and Indian basmati varieties. The bottom end, currently retailing at an average of Sh100 per kilo is served by most non-aromatic local rice, such as the popular sindano variety. This also appears to be a segment that is served by regional trade, as it converges around the average retail prices of locally produced rice in Uganda and Tanzania.

If the millers and traders pass this increase on to consumers, Mwea pishori rice will go up by Sh62 a kilo

Whether the millers and traders will be able to pass on the cost to consumers depends on how price-elastic the variety is. Price elasticity means how demand varies with price. It is conceivable that the variety is price-inelastic, that is, the consumers will continue buying it, and not switch to other varieties. But that is tempting fate. If the higher price cannot be passed on to consumers, this would mean that millers and traders would have to absorb some of the cost. This in turn would make Mwea pishori (assuming that it is the only variety affected) less profitable to sell than competing products. Traders are not obliged to stock low-margin, slow moving products which tie up working capital. Instead of benefiting, Mwea pishori farmers may end up stuck with their paddy. But it is more likely that they will sell it below the government price.

Kenyatta seemed to have an inkling that his price is not tenable in the market for he is reported to have assured the farmers that the Kenya National Trading Corporation (KNTC) would buy their produce and distribute it to government institutions. KNTC is arguably the country’s most unnecessary and moribund parastatal. It loses money every year. From its 2017 audited accounts, the latest that I can find, it lost Sh12.8 million shillings, up from Sh8.5 million in 2016, bringing its accumulated losses to Sh227 million. If the directive sees the light of day, the cost will be borne by the public purse. I take it that the government institutions Kenyatta refers to will be education and health establishments, the military, prisons and such like. It is unlikely that the institutions forced to buy overpriced rice will be given an additional budget allocation, which will mean squeezing other items in the budget. This is how Moi ruined public institutions, one roadside declaration at a time.

This is how Moi ruined public institutions, one roadside declaration at a time

But something appears to be going wrong after the latest expansion. The data shows yields falling to below 4t/ha. The 2016/17 season appears to have been a particularly bad one, when production dropped by 25 per cent from 79,000 to 59,000 tonnes. It is possible that the reported increase in acreage may not all have been put under production. Still, it raises the question why the huge investment in irrigation is not reflected in production. Could it be another mega-infrastructure project gone wrong?

While farmers’ revenues have fallen sharply, from Sh370,000 per acre to Sh106,000 and Sh152,600 in the 2016/17 and 2017/18 respectively, price appears to have relatively little to do with it. Apart from the 2016/17 season when the price fell sharply to Sh30 per kg of paddy and the unusually high price of Sh50-52 in the preceding two years, prices have been relatively stable at around Sh40 per kilo. Clearly, if there is a problem then it is one of production, and probably related to the recent massive expansion of the irrigation scheme. Increasing the price by administrative fiat is not going to fix it. As I keep reminding these folks, they cannot rig the economy.

Clearly, if there is a problem then it is one of production, and probably related to the recent massive expansion of the irrigation scheme

Which brings us to an intriguing question. A few weeks ago, Kenyatta issued a similar edict, ordering the Kenya Co-operative Creameries to increase the farm-gate price of milk. This column wondered why Kenyatta would personally wade into the milk farmers’ woes, knowing that they are synonymous with his family’s cartelisation of the processed milk industry. Kenyatta is not running for re-election so why the charm offensive in his political backyard?

I see two possibilities. First, he could be succumbing to the temptation to hang on to power, and perhaps this BBI thing, whether from the outset or as an afterthought, is the Trojan horse for Kenyatta to succeed himself as some have suspected all along. Second, that he, like Moi, is a man out of his depth in matters economics. As the chronicler of seven years of non-stop mathogothanio* economics, I would submit that the latter is just as likely as the former.