What is the Sinister Motive Behind the Mwende Mwinzi Probe? 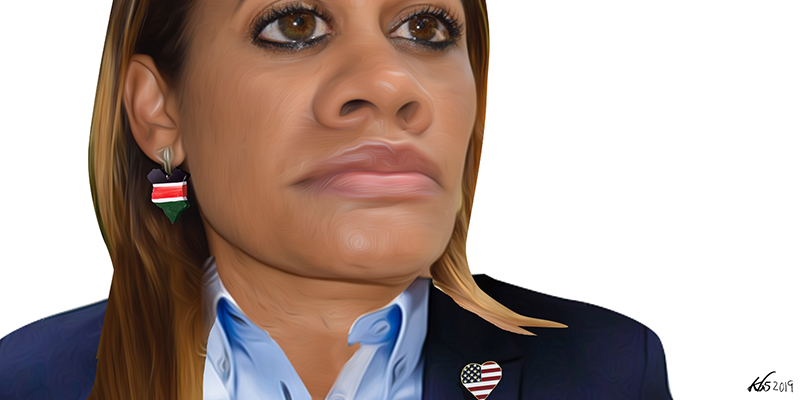 How did the appointment of a Kenyan citizen as Kenya’s Ambassador to South Korea become so embroiled in controversy as to seem like a personal vendetta?

Early in the year, Mwende Mwinzi, a dual citizen of Kenya and the United States, went through the vetting process administered by the Defense and Foreign Relations Committee as the law requires. From its onset, some Members of Parliament began to question her suitability for the post as they openly questioned the authenticity of her Kenyanness and claimed that she does “not have any unique skills other Kenyans don’t have”.

The Mwende drama started with a delegation that went to the president to whisper in his ear about the problem posed by the nomination of a dual citizen, falsely claiming that her appointment was unconstitutional. As it turned out, her appointment was indeed fully within the laws of Kenya, as Ambassadors and High Commissioners are not considered state officials.  Further to this, under Article 78 (3) (b) of Chapter 6 of the Constitution on Leadership and Integrity, she is qualified as a Kenyan whose dual nationality is a result of the “operation of that country’s law, without ability to opt out” (in this case the US).

But the war to dislodge Ms. Mwinzi only intensified and, in a vicious campaign to disqualify her, has gathered the most ardent supporters of the call to remove her even before she has taken up her appointment. Ms. Mwinzi’s loyalty has been loudly questioned, with opinion-shapers peddling doubts about her ability—and by extension the ability of all dual-citizenship Kenyans—to be loyal to Kenya while holding another country’s citizenship.

This narrow thinking completely misses the point that diplomatic spies and sell-outs do not need dual citizenship to act out of greed, dissatisfaction or unpatriotic inclinations. A study of the history of espionage should be exciting and enlightening for those in thrall to this sensationalist propaganda.

It also misses the point that there are other dual-citizenship envoys in office. This is perfectly within the law, and there is no logical reasoning to support calls for the amendment of the constitution in order to disqualify them on the grounds that they are dual citizens.

The Mwende case has been fraught with hypocrisy and dubious intentions on the part of the vetting Members of Parliament who have now insisted that she must surrender her American citizenship in order to take up office as Kenya’s Ambassador to South Korea. This demand is not only unconstitutional but it is also sinister and cruel to require someone with family in the US to shoot themselves in the foot in order to serve their country.

It is also worth pointing out that it is global standard procedure for countries to appoint dual citizens as high-level diplomats. The United States has enough of these examples, starting with former Secretary of State Madeleine Albright who is Czech-American.  The generous Internet will yield more good examples from several countries that have discarded the self-defeating and parochial view that dual citizens are to be feared, shunned and their role in nation-building limited.

This fear of dual citizens and Kenyans in the diaspora in general, has often elicited the open disdain of Kenyan legislators for Kenyans living abroad. When this disdain and dismissal translate to a suppression of citizens’ rights and opportunities, then it inevitably becomes a legal battle.

Kenyans in the diaspora have never shied away from the fight for justice and inclusion. They have fought to make it clear that living a few hours away is a silly and unjust reason to be discriminated against and that legally holding more than one passport is not a measure of one’s loyalty or patriotism.

It takes smart leadership to recognise that inclusivity of all citizens regardless of their global residence is visionary in the globalised 21st century and that attempts at exclusion are toxic to the nation as a whole.

It is also astonishing that the oft-quoted diaspora remittances cease to count as a mark of loyalty for Kenyan legislators intent on dismissing the Kenyan diaspora’s fight to belong and to serve. Let us be very clear that recognised belonging is the right of every citizen. Kenyans in the diaspora actively show their belonging by investing their hard-earned billions in their home country and, like every other Kenyan, they partake in nation-building every day.

The familiar pettiness that surfaced about Ms. Mwinzi’s accent during her vetting is an example of what must cease if Kenya wishes to make good use of its citizens who have lived abroad. These irrelevant concerns undermine and detract from the more important issues of character, leadership and accomplishments that might be of benefit to our nation.

The sheer hypocrisy of the case has been exposed by the call to probe members of parliament who hold dual citizenship. The Kenyans for Justice and Development organisation has named eight members of parliament and two senators as state officials who need to be probed. This alone puts the vetting Committee’s credibility into question. It demands that all their recommendations against Ms. Mwinzi’s nomination be thrown out and that the constitution that allows her to be nominated reign supreme on this issue.

Mwende Mwinzi has served Kenya in many different capacities. In 2001 she started Twana Twitu, an organisation that has for 17 years supported over 3,000 orphaned and vulnerable children in Kitui. She was a columnist for Sunday Nation and for 3 years served on the National Economic and Social Council (NESC).

Ms. Mwinzi was also part of the team that devoted itself to improving Kenya’s image in the US at a time when Kenya had been negatively branded and was struggling to attract support to overcome its security challenges, boost tourism and trigger investment.  In the last election, Ms. Mwinzi vied for the seat of Member of Parliament for Mwingi West. She has clearly focused her life in Kenya not only in word but also in deed.

This persecution of one person is also a remarkably familiar pattern in the murky and mafia-ridden world of Kenyan politics where backdoor wheeling and dealing is done to secure high-level positions. With the political strategising for the 2022 presidential race already in place, political factions have been seeking to have “their people” in lucrative missions. Diplomatic corruption is both an international and local reality and, South Korea being a coveted station, it requires someone who will not give in to grand corruption schemes.

Editorial note: On November 14, 2019, the High Court of Kenya ruled that Kenya’s ambassador nominee to South Korea Mwende Mwinzi should not be forced to renounce her American citizenship as demanded by Parliament. Justice Makau further noted that an ambassador is not a State officer but a public officer, therefore, Ms. Mwinzi is not required to renounce her citizenship.