We Are Not Overrepresented, It’s the Imperial Presidency That’s Killing Us 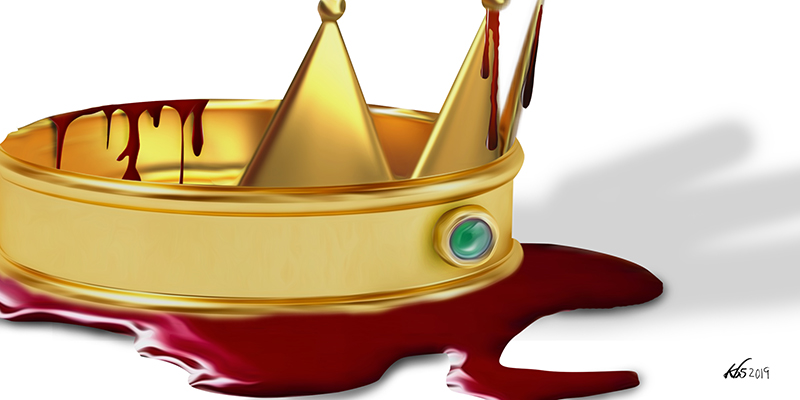 Are Kenyans overrepresented? If the raging referenda campaigns are to be believed, we are groaning under the financial burden of overpaid and extravagant elective offices. This contention is buttressed with cherry-picked misleading statistics and comparisons, for example, in an op-ed published in December 2015 titled Let us tackle the burden of over-representation, the Hon. Moses Kuria observed that India’s 1.2 billion people are represented by only 548 Members of Parliament while California’s 38 million people elect only one governor and two senators.

Let’s start with India. In addition to a 792-member parliament (547 MPs and 245 Senators) Indians elect another 4,600 representatives to state assemblies. Below the state governments, India has over 270,000 local authorities which translates to a local government for every 5,000 people. That is the equivalent of our having 9,600 local authorities, about 200 of them per county on average. Even under the old constitution, we only had 283 local authorities for the whole country. I do not have the number of councillors but even if we assume a modest average of five, that would be a councillor for every 1,000 people.

In addition to Federal and State governments, Americans elect representatives to over 3,000 county, and 36,000 municipal/town governments, as well as to a host of special-function civic bodies including school districts, police and fire departments, libraries and so on. So numerous are elective civic bodies that a census is conducted every five years. As per the latest one, there are 87,576 of them, an elective body for every 3,500 people. We do not have data but even if we take the same conservative figure of five, that is a representative for every 700 people. Americans cannot complain of being under-represented or under-governed.

If the raging referenda campaigns are to be believed, we are groaning under the financial burden of overpaid and extravagant elective offices. This contention is buttressed with cherry-picked misleading statistics and comparisons

According to data from the International Parliamentary Union (IPU), our parliament’s combined membership of 416 is ranked 33rd largest legislature out of 233 legislatures worldwide and 37th in terms of population per MP, at 108,000. The population of 108,000 per MP is in the middle of the pack in our peer group of countries with populations of 40 to 50 million people. The population per MP in this group ranges from Spain’s 78,000 people per MP to Colombia’s 178,000 per MP. It is below the group’s average of 123,000 people per MP.

The 2012 edition of the Global Parliamentary Report, also published by the IPU, featured a comparative analysis of the cost of national parliaments. Countries spend an average 0.5 per cent of the government budget on pay (of both elected members and parliamentary staff), and $5.77 per citizen in purchasing power parity (PPP) terms, equivalent to Sh290. In our peer group of countries in the 50 million population range, the budget share ranges from Spain’s 0.07 per cent to Tanzania’s 0.6 per cent, while the cost per citizen ranges from Tanzania’s $3.5 to South Korea’s $13.9. The total compensation budget for Senators, MPs and parliamentary staff this financial year, inclusive of allowances, is in the order of Sh13.2 billion and, translates to 0.66 per cent of the national budget, and Sh275 per person (PPP $5.44). The wage cost is higher than the global average while per citizen the cost is slightly below that average, but overall, these parameters are well within the global norm, as well as within the population peer group range (see chart). 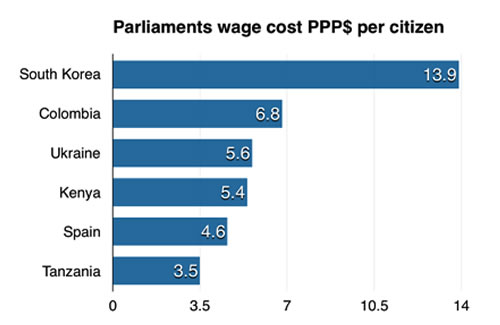 The long and short of it is that both our level and cost of representation at the national level is well within the global norm. When it comes to the subnational level, the overrepresentation narrative is a ludicrous proposition. A total of 2,222 MCAs (1,450 elected, 772 nominated) works out to an average of 22,000 people per MCA, while 47 counties is, on average, a subnational government per million citizens.  In addition to having the second-largest parliament in the world (1,443 members), the United Kingdom (Pop. 66m) has 418 local councils with 20,224 seats, that is 3,300 people per councillor. If we were to benchmark with the United Kingdom, we would have 300 local authorities with 14,500 councillors.

Closer to home, South Africa has, in addition to a 490-member parliament, nine provincial assemblies with 430 members and 278 municipalities. The City of Johannesburg (Pop. 4.5 million) Council has 270 councillors, more than double the size of the Nairobi County Assembly’s 123 members, while Gauteng Province (Pop. 13 million) has 1,072 elected councillors, one for every 12,000 people. Uganda’s elaborate local government system has district, municipal, town, sub-county and parish councils with a total of 26,000 councillors (and 1,500 chairpersons!), a councillor for every 1,460 people. It would not come as a surprise if, in a comprehensive comparison, we came out among the most underrepresented people in the world.

According to data from the International Parliamentary Union (IPU), our parliament’s combined membership of 416 is ranked 33rd largest legislature out of 233 legislatures worldwide and 37th in terms of population per MP, at 108,000.

The real backbreaking burden in this country is the executive arm of national government, both in terms of being bloated, but more significantly on account of profligate spending and plunder.

It is often forgotten that the 2010 constitution abolished several administrative tiers (provincial, regional, district, division). Essentially, the national government ought to have only two tiers national and county. But determined to cling on to power at all costs, the national government has resisted divesting itself of some devolved and many redundant functions, in particular the provincial administration. It is also worth noting that the counties’ Sh1.7 trillion equitable revenue share is actually less than the cumulative wage bill of the national government’s Sh2 trillion cumulative wage bill over the same period. The wage bill of Senators and MPs (Sh6 billion a year) is less than 2 per cent of this.

The recurrent budget of the presidency in the last financial year was Sh9.5 billion, more than the combined budget of the Auditor General’s Office (Sh5.4 billion) and the Ethics and Anti-Corruption Commission (Sh3.6 billion) and almost twice the combined budget of Sh5.8 billion for the ten oversight commissions established by the 2010 constitution (see Chart). Five years ago, the Judiciary’s budget was more than three times that of the presidency, but the presidency seems set to catch up. Over the last five years, the presidency’s budget has increased threefold (by Sh6 billion) while the Judiciary’s share has increased 10 per cent (by Sh1 billion), well below the rate of inflation. Is it by happenstance that the oversight institutions are underfunded while the only budget item that matches the presidency’s appetite is the increase in debt? 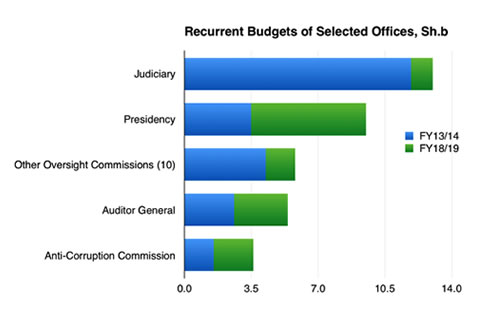 It should not come as a surprise then, that the political crisis precipitated by the failed presidential election has morphed into a problem of “power-sharing” by which is meant creating more room at the top of this gluttonous edifice. We are now called upon to forget that the electoral crisis was a consequence of impunity—the refusal by Uhuru Kenyatta to play by the rules of constitutional democracy. We had a fatally flawed presidential election in 2017. Who would have won it is immaterial—the Supreme Court of Kenya annulled it and ordered a clean election. This was blatantly defied. On what basis are we to believe that if we change the rules, the new rules will survive the next power struggle? No amount of constitutional tinkering can cure impunity.