An Injustice in Kenya’s History: The TJRC Report Six Years On 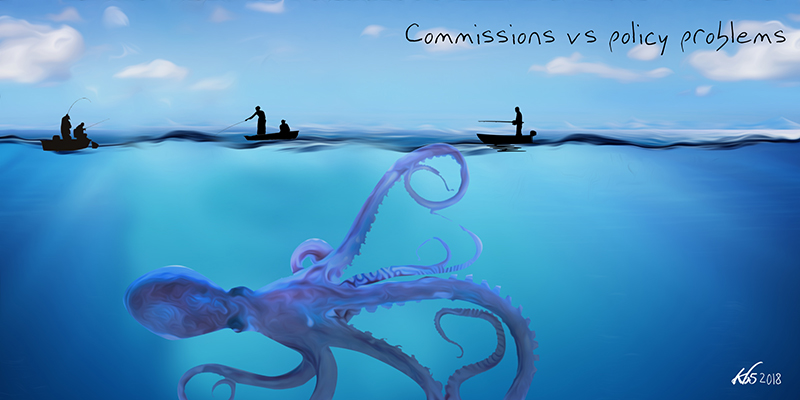 On 21 May 2013, Kenya’s Truth Justice and Reconciliation Commission (TJRC) handed over a four-volume report to President Uhuru Kenyatta. The report outlines a range of injustices and abuses that occurred in the country between December 1963 and the end of the post-election violence in 2008, and provides a range of recommendations and a clear implementation plan. Six years later, little progress has been made on its dissemination or the implementation of its recommendations.

The TJRC Commission collected over 40,000 statements – the largest number of any truth commission to date – and 1,000 memoranda. The Commission also held public and women’s hearings in 35 locations across the country, as well as a series of adversely mentioned person (AMP) and thematic hearings

This is unsurprising given the fate of previous commissions of inquiry, the credibility crisis that surrounded the TJRC’s chairman, and the limited media coverage that the Commission’s work enjoyed. Nevertheless, I find this depressing.

The reason is that, while many paid the TJRC little attention, a significant number of Kenyans opted to relay their stories, pain and fears. This is evident from the numbers; the Commission collected over 40,000 statements – the largest number of any truth commission to date – and 1,000 memoranda. The Commission also held public and women’s hearings in 35 locations across the country, as well as a series of adversely mentioned person (AMP) and thematic hearings.

To be fair, the TJRC’s founders were aware of the inadequacies of speaking, which is why they included “justice” in the title and gave the Commission powers to recommend further investigations, prosecutions, lustration (or a ban from holding public office), reparations, institutional and constitutional reforms, and a limited amnesty.

It is also evident from my own observations; in 2011 and 2012 I spent months following the TJRC around the country attending hearings, speaking to victims, alleged perpetrators and interested parties. From these interactions it was clear that, while many who came before the Commission welcomed the chance to speak, the majority submitted statements or memoranda or provided testimony in the hope that they would be heard and that some action would be taken. As one woman explained to me after a women’s hearing in Nakuru, she was glad that she had spoken as now the Commission would “come in and help”.

To be fair, the TJRC’s founders were aware of the inadequacies of speaking, which is why they included “justice” in the title and gave the Commission powers to recommend further investigations, prosecutions, lustration (or a ban from holding public office), reparations, institutional and constitutional reforms, and a limited amnesty. However, on the question of whether recommendations would be implemented, the Commission rather naively relied on the TJRC Act (2008), which stipulated “recommendations shall be implemented”. However, such legal provisions proved insufficient; in December 2013, parliament amended the Act to ensure that the report would first be considered by the National Assembly, something that is yet to happen.

But how did the TJRC come about and what was its mandate?

The Commission was informed by the belief that, while the post-election violence of 2007/8 was triggered by a disputed election, it was fuelled by more deep-rooted problems.

The establishment of a TJRC was first considered in 2002 at a moment of great optimism and hope after Mwai Kibaki and the National Rainbow Coalition (NARC) ousted President Moi and Kanu from power. However, a task force recommendation that a TJRC be established was ignored by the Kibaki government. The idea was later revived following the post-election violence of 2007/8 and the formation of a coalition government.

The TJRC was established by an Act of Parliament in 2008, began its work in 2009 and submitted a final report in 2013. The Commission was informed by the belief that, while the post-election violence of 2007/8 was triggered by a disputed election, it was fuelled by more deep-rooted problems. It was thus mandated to investigate a wide range of injustices – from perceptions of economic marginalisation and periods of ethnic clashes to state repression and torture – from Kenya’s independence in December 1963 to the end of the post-election violence in February 2008. As a result, while some insights into colonial rule were provided as context for post-colonial realities, the report is silent on Kibaki’s second term in office and Uhuru Kenyatta’s presidency.

In addition to documenting the past, the Commission was able to offer various recommendations including further investigations and prosecutions, reparations, institutional reform and amnesty for non-gross human rights violations. The aim was to contribute to truth, justice, reconciliation, and sustainable peace.

The Commission’s task was thus impossibly large and it also faced additional challenges including a credibility crisis around the Commission’s Chairman and limited media coverage. It was also upstaged by parallel proceedings at the International Criminal Court and was working in a context in which there had been no real transition.

Given these challenges, the report is actually pretty impressive.

Critically, it does not pretend to be exhaustive and recognises how – over four years and in a single report – it could not provide a “definitive history of the broad range of violations committed and suffered” over the course of 45 years (TJRC vol. 1 2013: v).

Given this impossibility, I am keenly aware of how my attempt to summarise a report that runs to over two thousand pages involves further simplification and omission – for which I apologise. Despite this, I think it is worth marking the six-year anniversary of the report’s submission – and recognising all those who engaged with the process – by saying something about the Commission’s findings.

First, it was clear that each regime – from the colonial period through the Kenyatta, Moi and Kibaki eras – had overseen widespread abuses through acts of commission and omission and that Kenyans had suffered (and many continue to suffer) as a consequence.

The establishment of a TJRC was first considered in 2002 at a moment of great optimism and hope after Mwai Kibaki and the National Rainbow Coalition (NARC) ousted President Moi and Kanu from power. However, a task force recommendation that a TJRC be established was ignored by the Kibaki government.

More specifically, the report outlined how the Kenyatta regime (1963–1978) was responsible for the largest number of political assassinations, and how the repression of dissent reached its apex under the one-party rule of Daniel arap Moi (1978–2002). In turn, while the commission recognised the reforms initiated by the first Kibaki regime (2002–2007), it also drew attention to ongoing corruption, ethnic favouritism and inter-communal violence, and to the collapse of the NARC coalition and the increase in extra-judicial killings, problems which, in its opinion, prepared “fertile ground (…) for the eruption of violence” in 2007–8 (TJRC vol. 2A 2013: 28–29).

The TJRC also highlighted the socio-economic effects of gross human rights violations. These included, for example, the challenges faced by former political detainees in finishing their education, securing employment and caring for their children. At the same time, the report sketches out some of the ways in which socio-economic factors impacted upon bodily integrity rights at a more general level through, for example, the relative vulnerability of marginalised people during conflict.

In terms of inter-communal conflict, the commission blamed the emergence of “negative ethnicity” on colonial rule and Britain’s adoption of a divide and rule strategy and alienation of large tracts of land, with historical grievances over land cited as the “single most important driver of conflicts and ethnic tension” (TJRC vol. 1 2013: vii).

However, all the post-colonial regimes were blamed for the perpetuation of such politics as, rather than provide redress, successive administrations “alienated more land from already affected communities for the benefit of politically privileged ethnic communities and the political elite” (TJRC vol. 1 2013: xiv) and favoured members of their own ethnic groups in employment and appointment processes (TJRC vol. 1 2013: x). According to the commission, a sense of ethnic competition was then exacerbated by multi-party politics, as “ethnicity became an even more potent tool for political [organisation] and access to state resources” (TJRC vol. 1 2013: ix–x). This combination of factors then led to “a volatile environment in which violence had been normalised and ethnic relations had become poisoned” (TJRC vol. 2A 2013: 29).

The commission also emphasised the “pervasiveness of socio-economic violations” across the country (TJRC vol. 1 2013: xv). More specifically, it found that – in addition to the socio-economic impacts of gross human rights violations – the “government’s exclusionary economic policies and practices in the distribution of public jobs and services inflicted suffering on huge sections of society at different historical moments” (TJRC vol. 1 2013: xv), with corruption in turn linked to everything from violent state security forces to poor health and education services.

In terms of spatial inequalities, the commission found that northern Kenya – taken to consist of former North Eastern, Upper Eastern and North Rift Valley provinces – together with former Coast, Nyanza and Western provinces suffered particularly harsh economic marginalisation as a result of biased or indifferent state policies. However, the commission also recognised how even residents of regions that were not identified as economically marginalised – namely, former Central, Nairobi, South Rift Valley, and Lower Eastern provinces – considered “themselves marginalised at one time or another” (TJRC vol. 1 2013: xv). The implication was that no single province had escaped economic marginalisation, with hardships often passed on to subsequent generations through a cycle of limited education and employment opportunities.

The Commission was “not just interested in what happened…. [but] in why things happened the way they did, what was their impact and who was responsible” (TJRC vol. 1 2013: 43). Regarding the why and the impact, the report is of mixed quality, but it is in establishing the who that the TJRC had the least success. Instead, the report details how the Commission met a wall of silence, denial and justifications. At the same time, the Commission found that the state had historically “covered-up or downplayed violations committed against its own citizens, especially those committed by state security agencies” and had “demonstrated no genuine commitment to investigate and punish atrocities and violations committed by its agents against innocent citizens” (TJRC vol. 4 2013: 10).

The commission concluded that the underlying causes of violations and contributing factors were complex and included centralised power, a culture of impunity, inter-ethnic competition, uneven development, under-employment and patriarchy.

These findings informed wide-ranging recommendations that included further investigations, lustration and prosecution of those allegedly involved in assassinations, massacres, land grabs and so forth. It also included specific apologies by the head of state for various atrocities suffered – from the torture and unlawful detention of political dissidents to acts of sexual violence committed by state security agencies during operations and periods of violence, and the state’s sanction of discrimination against women.

The report also called for the implementation of recommendations from previous commissions of inquiry, the fast-tracking of ongoing reforms of state institutions, such as the security services and judiciary, and the enactment of key pieces of legislation.

It also set out extensive guidelines for individual, collective and symbolic reparations. These included a framework for individual compensation, development policies to address the historic marginalisation of certain regions, and the establishment of public memorials to commemorate particular places, events and people.

The report and recommendations are thus wide-ranging, and their dissemination and implementation was always going to be a problem. However, the collective decision of members of parliament to change the Act in 2013 and their failure to discuss the report to date is – at least to me – a further injustice that marks Kenya’s history.

A full copy of the TJRC report as well as transcripts of many of the hearings can be found online courtesy of Prof. Ron Slye – one of the TJRC commissioners. Parts of this article draw directly from Gabrielle Lynch’s book, Performances of Injustice: The politics of truth, justice and reconciliation in Kenya (Cambridge University Press, 2018). Gabrielle is a Professor of Comparative Politics at the University of Warwick in the UK.