The Rwandan Genocide, and the Sins That Can and Can’t Be Forgiven 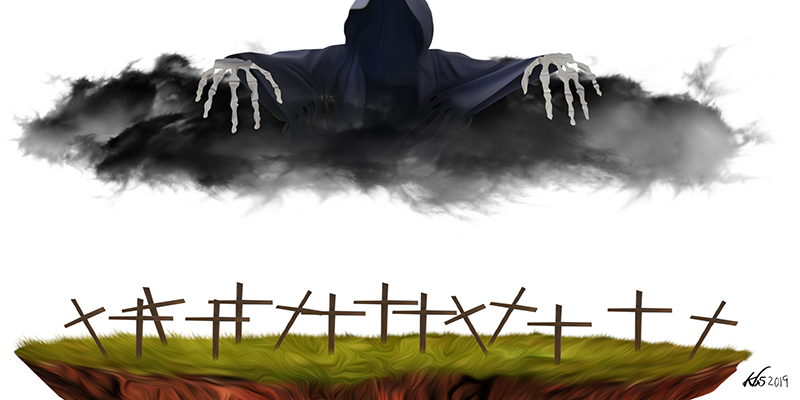 As 2018 closed, news came from Paris that France had abandoned a probe into the shooting down of a plane carrying the Rwandan and Burundian presidents and its French crew on April 6, 1994 – an event that is said to have sparked the genocide in Rwanda.

However, one cannot talk of the Rwandan genocide without referring to an attack four years earlier, on October 1, 1990, when rebels belonging to the Rwanda Patriotic Front/Army (RPF/A), comprising mostly refugees, launched an attack from Uganda in a campaign to reclaim statehood. Their campaign turned to disaster very quickly, with feuding within their ranks, and the killing in the first hours of the attack of their charismatic leader, Maj. Gen. Fred Rwigyema. He, like several RPA combatants, had been an officer in the Uganda army.

Weeks later, Paul Kagame, who was an officer in Uganda’s military intelligence and on a military training course in the USA, returned and took over the leadership of an RPA in disarray.

There are two principal accounts of how Rwigyema was killed. The official one in Rwanda is that he was shot by an enemy sniper in the head as he stood on a hill talking on military radio near the Uganda-Rwanda Kagitumba border through which the RPA had launched their attack. The other, more popular in Uganda and internationally, no less because of its rich conspiratorial flavour, is that Rwigyema was killed by one of his deputies, Peter Baingana, following an argument.

Baingana, a medical doctor and accomplished boxer while he was at Makerere University, was also an officer in the Uganda army, having joined Yoweri Museveni’s National Resistance Army (NRA) guerrillas in the early 1980s, like many Rwandan refugees. He represented an arcane, but deep, philosophical divide in the RPA: he was a leading critic of what the Rwandans disparaged as “integrationists”. Integrationists were the Rwandan (mainly Tutsi) diaspora and refugees, who were seen to have become too comfortable in their host countries, and who favoured either a negotiated return home, or were too deferential to Museveni’s views on how they should time their fight to return to Rwanda.

Rwigyema was a hugely popular figure in Uganda, and had been nicknamed “James Bond” for his exploits in the counter-insurgency that the Museveni government was carrying in northern and eastern Uganda against various rebel groups. He was Deputy Army Commander, and later Minister of State for Defence.

He was also into football. As a kind of patron of Villa FC. Weeks before the October 1990 attack, I went to Nakivubo Stadium to watch a Villa FC encounter. Rwigyema drove into the stadium just as the match was about to start, and a quite unnerving hysterical applause erupted as he walked to the pavilion. The spectators simply worshipped him.

In October 1990, Museveni was the Chairman of the Organisation of African Unity (OAU) and didn’t want the attack to happen on his watch. In fact, when it happened, he was giving a speech at the United Nations General Assembly in New York, and he got egg on his face for it.

Baingana had led the invasion, while Rwigyema was at the (today South) Sudan border, as Uganda propped up the Sudan People’s Liberation Army (SPLA) that was facing a new onslaught from Khartoum. He had to rush to catch up with the RPA, entering hours after Baingana had let them in. It’s also widely believed that an infuriated Uganda sent soldiers into Rwanda, arrested Baingana and his confederates, and executed them. To this day, one still gets stonewalled on these matters, as they would have been 24 years ago.

In October 1990, Museveni was the Chairman of the Organisation of African Unity (OAU) and didn’t want the attack to happen on his watch. In fact, when it happened, he was giving a speech at the United Nations General Assembly in New York, and he got egg on his face for it.

Kagame gathered up the debris of the RPA, and undertook a seemingly insane expedition. He led his soldiers to the Muhabura Mountains, far away from the safety of the Uganda border, and closer to the stronghold of then President Juvenal Habyarimana’s regime, and so called “Hutu power”.

However, there was a method to his madness. Once up in Muhabura, it was easy for the rebels to secure themselves more easily. But learning to survive in the cold mountains, and mastering how to get to and from there through dangerous territory, was an unforgiving ordeal of Darwinian selection; it meant that only the most hardened and disciplined soldiers remained in the RPA ranks. In addition, for people who had been refugees for nearly 40 years, getting to Muhabura forced them to re-learn a country that they had been away from for a long time, or had never been to, having been born in exile.

This and the events in October 1990 form an important undercurrent to the narrative of what happened on April 6, 1994, and the French case. It goes to the question of when, after reckoning with earlier massacres and pogroms, did what has become known as the Rwandan Genocide begin?

On the evening of April 6, 1994, a plane carrying President Juvenal Habyarimana and his Burundi counterpart, Cyprien Ntaryamira, was shot down near Kigali airport, killing everyone on board, including its French crew.

This and the events in October 1990 form an important undercurrent to the narrative of what happened on April 6, 1994, and the French case. It goes to the question of when, after reckoning with earlier massacres and pogroms, did what has become known as the Rwandan Genocide begin?

At that point, RPA guerrilla units had arrived in Kigali as an advance contingent, as the warring parties moved to implement the Arusha Peace Accord of August 1993, ending the war and establishing a Broad-Based Transitional Government (BBTG), with the RPF/A as part of it.

Within hours of the plane being brought down, extremist Hutu soldiers in the regular military and the Interahamwe militias fanned out in a 100 days frenzy of slaughter that left anything between 800,000 and one million people, mostly Tutsis, but also moderate and opposition Hutus, dead.

The RPF accuses France, a Habyarimana ally, of complicity in the killings, as it not only armed the regime, but allegedly also trained – and directed – the Interahamwe. The extremists, it holds, didn’t want the Arusha Accord, viewing it as a surrender by Habyarimana. Killing him not just got him out of the way, but also enabled them to settle the “Tutsi question” once and for all by eliminating them.

The French case, on the other hand, arose from the death of the crew, although the RPF saw it is as a cover-up for its role in the genocide. France made the political argument that the RPA didn’t want to share power, and sought to reassert Tutsi hegemony by taking a wrecking ball to it, so it shot down the plane.

But how could the extremists have been so organised and their militias so well-armed with machetes that enabled them to immediately spring into action as news of Habyarimana’s death spread?

The answers are to be found way back in Rwanda’s history, and in some of the events that played out after the RPA were beaten back in late October 1990.

Belgian colonialists took what was primarily an economic and class stratification and hardened it into an ethnic divide between the Tutsi (wealthier cattle owners who formed the elite because cattle was prized) and Hutus (mostly farmers). To do that, they had to come up with a profile. The Kigali Genocide Memorial shows videos of Rwandan peasants squatting in line in the sun as Belgian colonial officials walk through measuring their faces and body parts. Long nose? Tutsi. Short, big nose? Hutu, and so on.

Until then, there was the possibility of class mobility. A Hutu who acquired a large cattle herd and wealth could move up the economic class and become Tutsi. And a Tutsi who fell upon hard times could fall down the class ranks and be regarded as Hutu.

Subsequent regimes refined the ID system into a Rwandan version of apartheid that sharply marginalised the Tutsi. As the Tutsi refugees in Uganda used the organisation and leverage they had got from the Museveni war and victory to mobilise their return, the regime in Kigali started to prepare.

The timing of the October 1990 attack was not fortuitous. Beside Museveni and his apparatus being out of town, he had been in power for four years already and the rot had started to seep into the revolution.

A worldly operator, Habyarimana – who in the twisted realties of African politics had helped the Museveni rebels – enjoyed links to some of them now that they were in power in Kampala. He is thought to have infiltrated the Ugandan security system so heavily by bribing senior officers, that by late 1990 he had all but neared a tipping point, and would have been able to get his bought network to prevent an RPF/A attack.

The trigger for his operation had happened two years earlier when the RPF had held a convention in Kampala where Rwandan exiles and their offspring from all over the world had converged in record numbers. If Kigali then had been under any illusions of the RPF threat, they were banished then. Habyarimana went into the trenches.

This preparation was evident in October 1990. As the first RPF/A attack disintegrated, the Rwanda military struck back, including attacking suspected rebel sympathisers, mainly Tutsi peasant families, in the northeast. Those who could get away fled in their thousands across the border into Uganda.

In mid-October, with William Pike (now a director with The Star in Nairobi, but then heading the government-owned New Vision in Kampala) and the BBC Swahili correspondent in Uganda, Hussein Abdi, we went to the Kagitumba area to cover the war.

We were told that there was a large refugee camp “nearby” on the Uganda side. We were to spend hours getting lost in the bushes as we were misled by cattle herders who kept telling us, “Ah, you have reached, drive ahead it’s at the corner”, and kilometres later, there was nothing in sight.

Eventually we did find the camp. It was raining, and the place was miserable. However, the most striking thing was how many people had wounds inflicted, we were told, by machetes and axes. The significance of it was to hit home much later: by the time the RPF/A attacked, the machetes were ready.

On the other hand, the excruciating Darwinian selection, and monolithic discipline (still evident in the RPF today after 24 years in power), which enabled it to survive and win, means it was unlikely to gamble on shooting down Habyarimana’s plane and set off events it couldn’t control. (France has in the past accused the RPF of shooting down the plane.)

Eventually we did find the camp. It was raining, and the place was miserable. However, the most striking thing was how many people had wounds inflicted, we were told, by machetes and axes. The significance of it was to hit home much later: by the time the RPF/A attacked, the machetes were ready.