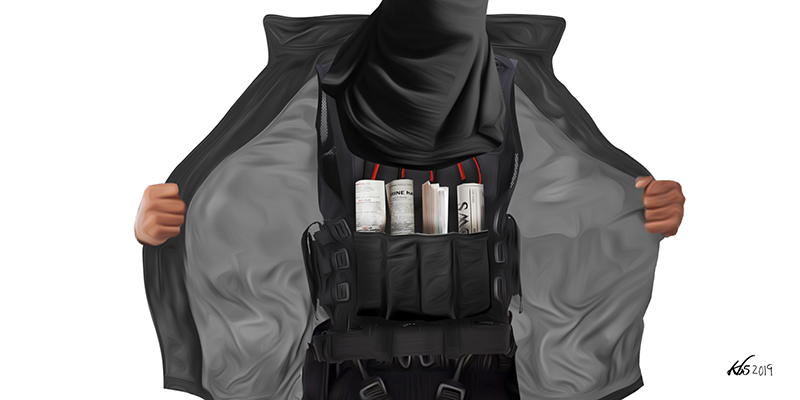 As the story of the terror attack on the Dusit D2 building on Nairobi’s Riverside Drive was unfolding, the New York Times carried an article that infuriated a lot of Kenyans who were still coming to terms with the fact that Al Shabaab terrorists had – once again – made Kenya’s capital city a target. The article by Kimiko de Freytas-Tamura, titled “Shabaab Claim Responsibility for Deadly Assault on Nairobi Hotel-Office Complex”, carried a disturbing photo of dead bodies slumped over tables in a restaurant in the building.

Kenyans on Twitter (KOT), quick to respond to such errors in judgement on the part of the local and international media, reacted furiously. Under the hashtag #SomeoneTell NY Times, many Kenyans argued that the newspaper had employed double standards – that if the images were of dead Americans, they would not have been published. (Indeed, to this day no one has seen bodies or body parts of the more than 3,000 people killed in the 9/11 attack in New York, nor does the American press show images of the many children and adults who have been killed in school shootings and other mass killing sprees in the United States.)

The article by Kimiko de Freytas-Tamura, titled “Shabaab Claim Responsibility for Deadly Assault on Nairobi Hotel-Office Complex”, carried a disturbing photo of dead bodies slumped over tables in a restaurant in the building.

Despite the protests, the New York Times refused to pull down the offending photo. Instead, it issued an unapologetic and defensive statement that said that the newspaper believed “it is important to give our readers a clear picture of the horror of an attack like this”, which “includes showing pictures that are not sensationalized but that give a real sense of the situation”. The statement further said that the newspaper takes “the same approach wherever in the world something like this happens – balancing the need for sensitivity and respect with our mission of showing the reality of events”.

The self-righteousness reflected in this statement belies a racism that is not immediately apparent, and which is often couched in the language of compassion. It reminded me of a photo essay published by TIME magazine in June 2010 that showed the dying moments of an 18-year-old Sierra Leonean woman called Mamma Sessay who had just given birth to twins in a rural clinic. Ten images captured Sessay’s slow and painful death as she struggled to give birth to the second twin, nearly 24 hours after giving birth to the first. It was as if the photographer anticipated her death, and decided to voyeuristically watch it happen before their eyes.

If the images were of dead Americans, they would not have been published…to this day no one has seen bodies or body parts of the more than 3,000 people killed in the 9/11 attack in New York.

The first image showed Sessay lying naked on a bloody surgical bed, her eyes wild and bewildered as a nurse tended to her. This image was followed by several others showing her steady decline: heavy bleeding followed by shallow breaths, falling blood pressure, loss of consciousness, and finally, death.

Why is death considered a private, sombre affair when the person dying or who has died is American but a public event if the person who is dying or is dead is African? As one Kenyan female blogger commented on the Mamma Sessay photos: “Here, the author and the photographer strip Mamma of all dignity, parading her in her very desperate moments for the world to see. Would these pictures have been published if she was white?”

Why the double standards? Perhaps it is because, as Jurgen Kronig pointed out in a March 2000 journal article, “Foreign correspondents have a better chance of getting airtime or space in their papers if they play to stereotypical expectations at home.”

The self-righteousness reflected in the NYT’s statement belies a racism that is not immediately apparent, and which is often couched in the language of compassion.

Perhaps the magazine’s intention was to highlight the high maternal mortality rates in many parts of Africa and to focus the world’s attention on this preventable tragedy. This is the same argument used by newspaper editors to show images of starving women and children in Somalia or Yemen. (One image I distinctly remember is that of a skeletal Somali infant lying in a foetal position, which was used on the front page of the New York Times at the height of 2011 famine in Somalia.)

Most editors and journalists in the West do not understand why such images offend so many Africans. They claim that these images sensitise their readers about an evolving tragedy and help to raise funds. After seeing such images, the argument goes, readers and policymakers might be prompted to do more for Africa or to give more to charity, thereby helping to prevent a calamity.

The phenomenon of media coverage resulting in a humanitarian response has been referred to as the “the CNN Effect”, which musicians such as Bob Geldof and Bono have become adept at exploiting. Those who are old enough to remember Band Aid will recall how the 1984 famine in Ethiopia – filmed in gritty detail by the Kenyan cameraman, Mohamed Amin – led Geldof and his fellow musicians to release an album titled “We Are the World” that catapulted the relief effort for Ethiopia.

Humanitarian organisations also exploit these situations by painting a bleak portrait of victims of famine and other disasters. Disseminating these images through the media helps them to raise funds for their organisations. As Alex de Waal notes in his book Famine Crimes, “Relief agency guides take visitors to the worst places…and are keen to stress the hunger and dependence of the people and the importance of relief. This leads to exaggerated, dire predictions and stereotypes of pathetic dependency.”

Michael Maren, author of The Road to Hell: The Ravaging Effects of Foreign Aid and International Charity, says that it helps if the Africans being portrayed are both helpless and brave. “Journalists write about the quiet dignity of the hopelessly dying,” he wrote. “If the Africans were merely hungry and poor, begging or conning coins on the streets of Nairobi or Addis Ababa, we might become annoyed and brush them aside. When they steal tape decks from our Land Cruisers, we feel anger and disgust. It is only in their weakness, when their death is inevitable, that we are touched.”

Disseminating these images helps raise funds […] it helps if the Africans being portrayed are both helpless and brave.

Journalists, photographers and editors have a moral responsibility towards the dead, the dying and their families, a lesson that the photojournalist Kevin Carter learnt too late. In the early 1990s, the charity Save the Children used a photo by Carter that showed a starving Sudanese child being stalked by a vulture. Many Africans and people working for relief organisations were understandably disgusted by the image; the head of one NGO even referred to it as “hunger porn”. Carter committed suicide a few weeks after receiving the Pulitzer Prize in 1994 for his photo. He is reported to have said that he managed to scare off the waiting vulture but did not know the outcome of the famished child’s desperate efforts to crawl to a feeding station near the village of Ayod in Sudan. It is believed that not knowing the fate of the child was something that haunted him, and could have contributed to his decision to end his own life.

Following up on the fate of those whose images are published is good journalistic practice and a lesson that the Nation’s editors learnt quickly after the newspaper carried an image on its front page of a woman screaming in pain during the Westgate mall terror attack in Nairobi in September 2013. Apparently, the family of the woman – who apparently died as a result of her injuries– objected to the image being published. It is rumoured that the editors on duty on the night when the decision to use the photo was made were severely reprimanded by the newspaper’s management; the Nation’s editors have since been more cautious about the images the newspaper publishes, especially those taken during terror attacks.

Journalists, photographers and editors have a moral responsibility towards the dead, the dying and their families, a lesson that the photojournalist Kevin Carter learnt too late.

All people – including Africans – deserve dignity, especially in their dying moments. Western journalists cannot claim to be neutral and impartial when they employ double standards in their coverage of disasters taking place in far-off places. They cannot make a moral or ethical case for not showing the bodies of dead Americans and Europeans while at the same time arguing that they are morally or professionally obligated to show “the reality of events” when the dead people happen to be Africans or Arabs. Famished children in Yemen or Somalia, Iraqis killed in bomb attacks, dying African mothers and Kenyan terror attack victims must be accorded the same respect as the victims of tragedies taking place in their own countries.