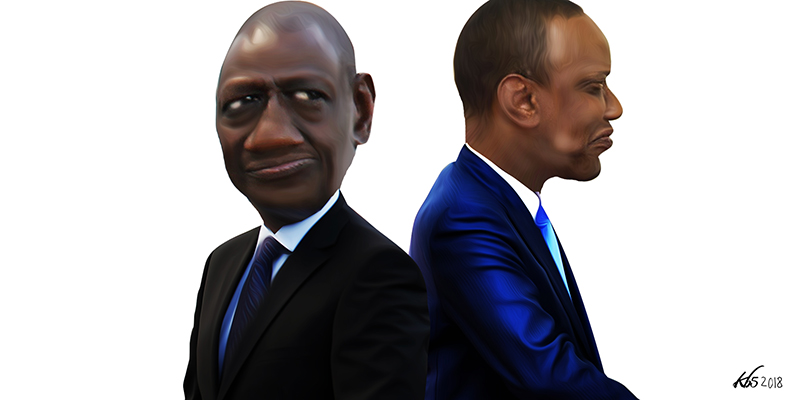 I was having coffee with a friend a few days after ‘The Handshake”, as the Uhuru Kenyatta-Raila Odinga rapprochement has come to be known, and noticed three gentlemen sitting at the next table, stealing glances. They stood up to leave, walked to our table and offered compliments. One of them lingered on. I invited him to sit. My friend had to leave. We sat for another hour. He did most of the talking.

I need to disclose at this point that the three gentlemen were prominent Kikuyus. This was the first of several encounters I’ve had with the Kikuyu elite since then, a group which, for obvious reasons, I have not had occasion to interact with lately.

I have learned from these encounters that the rapprochement has precipitated both relief and fear. There are two related parts to this sense of relief. First, it has given Uhuru Kenyatta a political lifeline. As one gentleman put it: “Our man (Kenyatta)” was being choked. He could not breathe. Now he can breathe.” Second, it portends an alternative to what seemed to be a certain succession of Kenyatta by his deputy William Ruto. But underlying this sense of relief is fear. Fear of what reneging on the pact between Kenyatta and Ruto portends. The word that has been used most frequently is “hostages”, meaning of course the Kikuyu in the Rift Valley diaspora.

Once he survived the aftermath of the events of `69, Jomo Kenyatta became a small god. HIs London-trained consigliere, Attorney-General Charles Njonjo, decreed imagining his mortality lése majesté to ward off the rival faction within The Family, which had its own ideas for the old man’s imminent succession. So people stopped imagining. Then, he died. A sunny Tuesday morning. Just like that. And all the King’s horses and all the King’s men simply couldn’t put it together again.

There is also a sense of helplessness borne of a realization that their political destiny is out of their hands, set to be determined by a duel between their enemies, the Kalenjiin, who hold the hostages, and the Luo, with whom they have a toxic political feud going back half a century.

It’s a choice between the devil and the deep blue sea.

The Kikuyu elite is the author of its predicament.

As many Kenyans will know, we started off at independence with a multiparty, federal, parliamentary system. A series of political manoeuvres between 1963 and 1969 changed Kenya from a multiparty, federal parliamentary system to a one-party dictatorship. The independence constitution, signed in Lancaster House in March, 1963 by the main political protagonists, KANU and KADU, did not last the year. Shortly after independence, the opposition party KADU dissolved itself. Its members joined KANU making Kenya a de facto one-party state. Multiparty politics was restored briefly when in 1966 KANU deliberately restructured its leadership to dilute Oginga Odinga’s party vice-presidency into eight positions, one from each of the provinces. This triggered the formation of the Kenya Peoples Union, and led subsequently to the “little general election.”The little general election would have been unnecessary had the constitution not been amended, precisely to frustrate the KPU, to require members who cross the floor to seek re-election. It would be the last multiparty election for 26 years.

Moi was appointed vice-president of the republic in 1967 following the sudden resignation of Joseph Murumbi, Odinga’s replacement. Moi was not a leading contender. His name did not feature at all in the frenzied speculation that went on for the three months that the position was vacant.

Jomo Kenyatta would have faced his first election challenge in 1969. His health was not good. Jaramogi was a definite challenger. Mboya was the obvious heir-apparent, and possible challenger in that election or the next. In 1968, the minimum age to contest the presidency was raised from 35 to 40. Mboya was then 38. On 5 July 1969, Mboya was assassinated. In October, KPU was banned and Odinga put under house arrest. In December at the general elections, Jomo Kenyatta was elected unopposed.

August 22, 1978 is one of those days when every Kenyan who was old enough remembers where they were and what they were doing when they heard the news. I was sitting under a tree reading a book. My father came home from work early afternoon, looking like he had seen a ghost.

Once he survived the aftermath of the events of `69, Jomo Kenyatta became a small god. HIs London-trained consigliere, Attorney-General Charles Njonjo, decreed imagining his mortality lése majesté to ward off the rival faction within The Family, as the Kenyatta inner circle was known, which had its own ideas for the old man’s imminent succession. So people stopped imagining. Then, he died. A sunny Tuesday morning. Just like that. And all the King’s horses and all the King’s men simply couldn’t put it together again.

Jomo bequeathed the Kikuyu elite not just a taste for power but a sense of entitlement – and in some quarters, a belief in manifest destiny. In his lifetime, it was proclaimed that the biki biki (motocycle outriders) would never cross the Chania, meaning power would never leave Kiambu. Oathing, which had begun sometime in 1968 soon after Kenyatta suffered a massive stroke in May of that year, was meant to bind the Kikuyu to this idea. Crossing the Chania takes you to Murang’a and onward to Nyeri. It was unthinkable that the power could leave Kikuyuland. It does not seem to have occurred to them that with Mboya dead and KPU banned, they had all but ensured that Moi would succeed Kenyatta. The 1976 change-the-constitution campaign, and the Plan B Ngoroko affair, in which a militia within the Anti-Stock Theft Unit was outfitted with top-of-the-range arms and training specifically to eliminate Moi, just in case – all that was too little too late.

Moi’s elevation to vice-president under Jomo belied a Faustian bargain with the Kalenjin elite—land for power. Of this they may not have been alive to at the time, but it was brought to their attention in 1992, and in 1997 and in 2007. In one of those extreme ironies of fate, the ICC indictments drove the Kikuyu and Kalenjin elite into an even tighter political embrace.

Under Moi, the ‘passing cloud’ that lingered slightly longer than anticipated, the struggle for power became a quest to return the river to its course (gucookia ruui mukaro).

But what Jomo passed on was a vicious predatory presidency whose allure the Kikuyu elite seem unable to resist but live in mortal fear of it being out of their hands. We say in Gikuyu kahiu koohiga muno gatemaga mwene (when a knife is too sharp it cuts the owner). Moi wielded the knife that Jomo sharpened.

In 2002, Kibaki entered into a political pact to dismantle this power structure, but as soon as he assumed office, he regrouped with the Jomo-era cronies and subverted the pact. While both the Bomas Convention and the Committee of Experts (CoE) proposed a parliamentary system with a French-style dual executive, political skulduggery saw us end up with an American style pure presidential system that had never been contemplated.

But more poignantly, Moi’s elevation to vice-president under Jomo belied a Faustian bargain with the Kalenjin elite—land for power. Of this they may not have been alive to at the time, but it was brought to their attention in 1992, and in 1997 and in 2007. In one of those extreme ironies of fate, the ICC indictments drove the Kikuyu and Kalenjin elite into an even tighter political embrace.

For the past four years, Uhuru Kenyatta and his acolytes have fought tooth and nail to restore the ancien regime. The happy-go-lucky high-fiving kamwana was enthroned muthamaki (king). He took to donning military fatigues but the tough guy act never took off, bloodshot eyes notwithstanding. By the time of the August 2017 elections, a case for benevolent dictatorship was being made. For the second term we were promised a “lethal, brutal and more ruthless” Kenyatta. In a country that tottered on the edge of an ethnic conflagration only a decade ago, the hubris and ethnic jingoism we have been treated to over the past few years beggars belief.

For whatever reason, it appears that the Kikuyu power elite had once again not contemplated that there being little, if any, prospect of Uhuru Kenyatta being succeeded by another Kikuyu, that the knife they were so intent on sharpening would soon be wielded by others. I have contended, including to members of this cabal, that Uhuru Kenyatta, and the Kikuyu community in general had more to gain from a free and fair election than the opposition. Why so?

losing the election would have by default discharged the political pact to deliver the presidency to his deputy in 2022. In short, my contention was, and remains, that Uhuru Kenyatta had everything to gain and nothing to lose from a free and fair election. Not so his partner in crime.

Win or lose, Uhuru Kenyatta would have been credited with only the second free and fair election (after the 2002 contest), and the first one with the incumbent contesting. If he won, he would have eased the burden of illegitimacy from the 2013 election and gained some control over his legacy. If he lost, he would have earned accolades for accepting defeat, as he did in 2002 and earned his place in history as the first Kenyan president to do so. A legacy and continental statesman role would have been assured—incumbents graciously conceding and going home is still a big deal on this continent. More significantly, losing the election would have by default discharged the political pact to deliver the presidency to his deputy in 2022. In short, my contention was, and remains, that Uhuru Kenyatta had everything to gain and nothing to lose from a free and fair election.

Not so his partner in crime. The 2022 deal was always tenuous in so far as it was predicated on Kikuyus voting en masse for William Ruto be it out of reciprocity or fear. The surer way for Uhuru to deliver on the bargain was to establish the system now characterized as electoral authoritarianism— sham elections, a captive judiciary and a parliament to rubber-stamp it all.

The Kalenjin elite has been at the centre of power for all but five years (2003-7) of the 50 years since Moi became vice president in 1967. The country has paid for it in spades – in blood and plunder. In 2007, facing the prospect of staying “in the cold” for another five, they executed a thousand hostages. Twenty-five years on, our democratic transition remains hostage to this political neurosis. We need to know how much longer. We need to know how much more we owe this rapacious cabal who have come believe apparently, that plunder is a birthright.

It is fortuitous that Daniel arap Moi is still here. There is one more thing he can still do for his country. He can discharge this debt. All he has to do is call his people and tell them to let the Kikuyu settlers be.

As for the Kikuyu community, it needs to reflect honestly and deeply about its obsession with power. Kahiu koohiga muno gatemaga mwene.