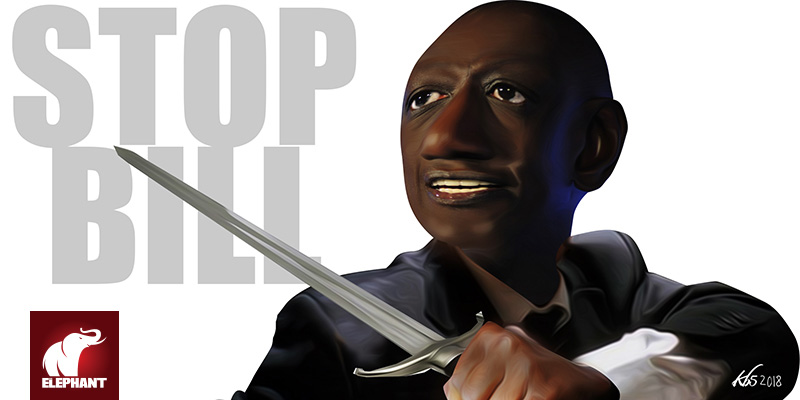 On 9th March 2018, Uhuru Kenyatta and Raila Odinga stepped out of Harambee House to a political ceasefire ‘handshake’ that has been the subject of intense debate and speculation ever since. Indeed, it seems to have started the usual massive elite political realignments that take place prior to a transitional election such as the upcoming one in 2022. The handshake was from initial perceptions at least, the kind of boardroom deal that the Kenyan elite has perfected over decades. This one is growing into a ‘Building Bridges to a New Kenyan Nation Project’ whose details are clearly still evolving and thus the cause of some anticipation and anxiety.

By late 2017 rigged elections; the end of ‘corruption’ and a seamless slide into an era of rampant theft and plunder; on-going slow burn crisis in health, education and the overall economy had served to galvanise behind Raila Odinga in his permutation as ‘Baba’, the ‘People’s President’, perhaps the broadest and most resolute mass formation in our politics since the start of FORD in the early 1990s. Many of Baba’s supporters who showed up in a clearly fearless multitude for his audacious swearing in as the People’s President on the 30th of January were not all ODM members or even NASA voters but simply Kenyans who identified with the issues, frustrations, anger, aspirations and hopes that informed attitudes to the event.

The handshake had the effect of both deflating and demobilising the Baba multitude…The underlying issues that had served to radicalise a majority of the population into delegitimising the current Kenyatta regime – the rigging of elections, deliberate undermining of the 2010 constitution, attacks on independent governance institutions and all dissent, plunder of the economy, spiralling cost of living – have been put on the back burner while two of the country’s most powerful adversaries reach an accommodation.

As a result, the handshake has initially had the effect of both deflating and demobilising the Baba multitude. It has left many perplexed and others suspicious that the underlying issues that had served to radicalise a majority of the population into delegitimising the current Kenyatta regime – the rigging of elections, deliberate undermining of the 2010 constitution, attacks on independent governance institutions and all dissent, plunder of the economy, spiralling cost of living etc – have been put on the back burner while two of the country’s most powerful adversaries reach an accommodation. Only some foreign diplomats, pro-regime business lobbies and those who understand the handshake as the beginnings of a ‘nusu mkate’ arrangement with jobs, cash and patronage for all with snouts in the trough seemed unequivocally enthusiastic.

To elites in neighbouring countries it is all very fascinating – at once an example of the deeply cynical deal-making of Kenyan elite politics and at the same time what some would like to characterise as an example of ‘maturity’ in Kenyan politics, that ultimately all political problems are susceptible to negotiation in smoke filled rooms over a tot or two of whiskey. There is no structure here – this isn’t CCM bigwigs steering the ship of Tanzanian politics; or the ANC doing the same in South Africa. Our process are usually far more personalised and ‘commercialised’.

Elite realignments are always expected before transitional elections in Kenya. Our elite is made up largely of businessmen created by the State and who become politicians primarily to consolidate and protect their business interests. In contrast, Uganda, Rwanda, Sudan etc are ran by soldiers which makes the utterly contortionary deal-making the Kenyan elite is capable of less likely in those contexts. There isn’t much chance of Museveni reaching out to Kizza Besigye, Kagame to anyone; Omar el Bashir etc. Our businessmen are dealmakers. Ironically, and cynically, this creates for a level of stability on the political front that is underwritten by the theft of public resources.

The Kenyan tradition is that fiscal distress of the kind the current regime is in often opens up political space especially when it’s combined with foreign pressure. We saw such openings at the start of the 1990s, towards the end of the 1990s and more catastrophically in 2007/8. The same could be happening now though the pressures are more tectonic given our demographics, constitutional reality, economic disparities, social dislocation, devolution and political polarisation.

As debate has intensified as to what the handshake will morph into in real political terms it has become clear that political realignments will only be given legal expression, especially given our current constitution, if the constitution itself is changed. One genuinely popular proposal, which has been on the cards before, is to turn Kenya into a more inclusive parliamentary system of government. Indeed this was basically the original Bomas draft in 2004. On paper this is an excellent idea.

Sceptics note that historically the Kenyan elite changes the constitution when under tremendous political and economic pressure such as 1991 and 2010; or when the realignments are aimed at locking powerful players out of the political game. In 1968 constitutional changes were mooted to lock Tom Mboya out of the presidency for example and in the mid-1970s changes were discussed to try and ensure a Kalenjin vice president, Daniel arap Moi, did not automatically succeed President Kenyatta when Mzee was in failing health. And amid all the chatter about progressive constitutional changes the regime has introduced Miscellaneous Amendments Act that appears to, among a host of wooly retrogressive proposals, start the process of removing investigative powers from an already hapless Ethics and Anti Corruption Commission (EACC). It would more productive to abolish this outfit given continental experience than keep it alive but castrated.

The apparent net loser around the handshake thus far is the Deputy President, William Ruto. Even the parliamentary system idea as thus far very sketchily articulated is being cynically understood by some as a move by the Kikuyu elite to alienate the Deputy President in favour of a political alliance with the powerful popular backing of the Odinga collective. The underlying narratives here are compelling and inform the current debate about constitutional reform before 2022.

One of the things the Kenyatta-Ruto alliance did, much as the Kenyatta I-Moi I one did in the 1960s, was secure Kikuyu settlement in the Rift Valley. Throughout his tenure as vice president, Moi’s most ruthless political management was of Kalenjin political leaders who’d always resented this inward emigration. Throughout the 1990s and until the Kenyatta-Ruto pact in 2012 these ‘Kikuyu hostages’ in the Rift Valley have defined Kikuyu political elite pragmatism vis-à-vis national political alliance building. This has been despite giant spasms of violence against non-Kalenjins in and around the Rift Valley most intensely in 2007/8 Kenyan near death experience that was the PEV. The handshake, especially if the political architecture that emerges attempts to stymie Ruto’s presidential ambitions, could promise a return to the violence and displacements of the past. And yet there is a mood being cultivated among elements within the Kikuyu elite that Ruto needs to be stopped; the Rift Valley hostages finally released and the only man to do this heavy lifting is Raila Odinga.

Though people don’t often say it openly, the Deputy President is today considered Kenya’s most frightening political figure. His opponents and adversaries don’t end up well; he’s been to the International Criminal Court and back; and, his name and that of his closest allies pop up in all serious research (including by the government’s own commissions of inquiry) on previous deadly violence in the Rift Valley. He is also among Kenya’s most hardworking and focussed politicians, clearly unencumbered by a value set that even remotely coincides with the underlying values of the constitution. Very astutely, he is already presenting himself as the rags-to-riches ‘hustler’ and underdog facing a dynastic plot against his ascendancy. His supporters when confronted with widespread allegations of corruption on the DP’s part retort robustly that there isn’t anyone among the current elite with the moral authority to even talk about corruption. There is a working assumption that a Ruto presidency would collapse the constitution; see rampant impunity and disassembling of the judiciary, media and civil society. There is, as such, an existential struggle against Ruto in some important sections of Kenyan society. That said, he is also among the most resilient big beasts on our political savannah. This for some explains why the Kikuyu elite would want another furiously tenacious political beast – Raila Odinga – to take him on.

Will the 2010 constitution be thrown under the bus of political deal-making by tribal barons in the run-up to 2022 or will the ‘Building Bridges to a New Kenyan Nation Project’ actually succeed in forging a diverse and wide enough Kenyan coalition for it to have the legitimacy to stabilise a politically polarised country?

The beginnings of these realignments are forcing important questions onto the table. Will the 2010 constitution be thrown under the bus of political deal-making by tribal barons in the run-up to 2022 or will the ‘Building Bridges to a New Kenyan Nation Project’ actually succeed in forging a diverse and wide enough Kenyan coalition for it to have the legitimacy to stabilise a politically polarised country heaving under the weight of rampant theft and plunder, a flailing economy for the majority and key sectors in a state of dysfunction? There is another broader implication: impunity clearly works in Kenya if the same elites responsible for current problems can hatch a scheme to deal their way out of it without any sense of restitution or justice. Finally, this must all feel quite strange to elites from the ‘other tribes’ forced watching as the carcass of Kenya being divvied up by the same lot who’ve been doing the divvying up since the 1960s yet again.

For the handshake to work even the move to a parliamentary system being theorised would need to be part of a broadly validated political settlement. Such validation would imply a heavy dose of accountability, restitution and lustration on the part of some of the very authors of the settlement. Kenyans have the wits to pull this off but the will among the elite has never been apparent except for fleeting glimpses when a political or economic gun is held to their heads. Into the stewing pot we boldly leap…