We Resigned Not to Kill the Nation, but to Save It 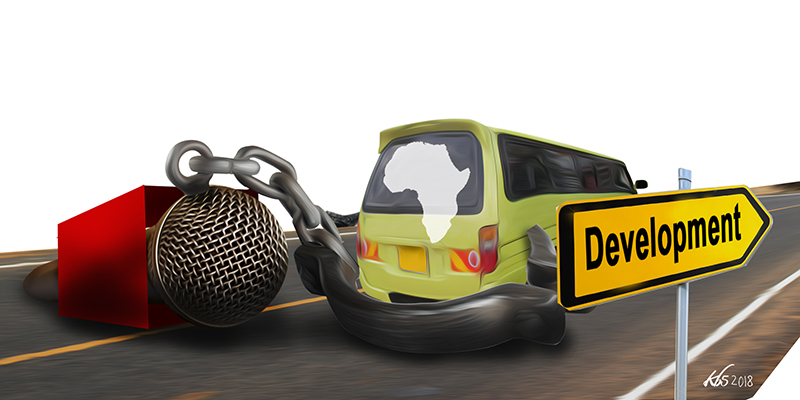 Media freedom in Africa is under threat. Sadly, this is nothing new. The first attack on press freedom came during the late colonial era in the 1950s, against the new magazines and newspapers being produced by nationalist movements. The second came immediately after independence, when nationalist leaders themselves moved to mute dissent, claiming that unity was necessary for development.

Things became particularly bleak in the 1980s, when in many countries the only way a journalist could critique the president and his policies was through satire – and even that was dangerous. The exceptions to this trend, notably Botswana and Mauritius where media freedoms were respected to one degree or another, only confirmed the general rule: the media was an enemy of the State.

The 1990s brought great hope for democratic renewal. Opposition parties were legalised and governments began to speak the language of democratic reform. However, while constitutional reforms and transfers of power created moments of greater transparency and openness, as in Kenya where the defeat of the Kenya African National Unity led to a resurgence of journalistic activity, governments have very quickly moved to establish control over the flow of information.

This has included the use of a wide range of strategies, including outright censorship, manipulating paid advertising to favour pliant outlets, and repression. The figures are shocking. In 2017 alone, five journalists were imprisoned in the Democratic Republic of Congo, five in Ethiopia, 15 in Eritrea, eight in Uganda and 20 in Egypt. The only other regions of the world where things look this bad are the Middle East and the more authoritarian parts of Asia.

Of course, the media is not the only target of these States. This ongoing trend needs to be placed in a broader context in which governments have sought to re-write the rules of the game, closing off space for dissent. According to Freedom House, the US think tank that ranks the quality of civil liberties and political rights of every country in the world, the average standard of democracy has fallen every year for a decade.

This decline has taken different forms in different countries. In established authoritarian states such as Rwanda, there has been a further crackdown on the opposition and an entrenchment of the powers of the president. And even in more democratic states, such as Botswana, there has been a gradual process of democratic backsliding, with a greater centralization of power in the hands of a small number of individuals.

In those states lying between these two extremes, such as Kenya, which hold relatively competitive elections but in the absence of fully democratic politics, the process has involved the greater use of repression to intimidate the opposition, and the re-assertion of political control over supposedly independent democratic institutions. This has made it harder for opposition parties to win power, especially in countries such as Zambia where sitting presidents have made it clear that they intend to retain power come what may.

But despite the very different trajectories of these states, they share one commonality: in almost all of them the freedom of the press has deliberately been undermined.

Nowhere is this harsh reality better demonstrated than in Eastern Africa. While Eritrea has one of the worst records in the region, the Democratic Republic of Congo is also one of the most dangerous places in the world to be a journalist. Since 1992, five have been killed, and many more intimidated and arrested. Things are also very tough in Burundi, where the media is regularly harassed and the Interior Ministry closed down the country’s journalists’ union in 2016.

A couple of years ago, Tanzania would not have been mentioned in the same breath as Burundi, Eritrea and the DRC where press freedom is concerned. But things have changed radically under President John Magufuli. Not only have journalists been arrested for criticising the president, the government has also moved to assert control over the blogosphere, announcing plans to charge social media users $930 for the right to air their views. As I write, government critics are living in fear of what repressive measures the ruling party will come up with next, and what will happen to them if they speak out.

But as Margaret Mead once said, “Never doubt that a small group of thoughtful, committed, citizens can change the world. Indeed, it is the only thing that ever has.”

Things have also taken a turn for the worse in Kenya, where the government has employed a number of different strategies to reign in one of the continent’s more dynamic medias. On the one hand, representatives of senior politicians have taken to calling editors and threatening journalists, demanding that they kill negative stories and publish more positive analysis. On the other, the ruling party has manipulated its control of the government advertising budget – the single biggest source of income for most newspapers – to punish those who refuse to play ball.

For those who care about democracy and press freedom, this raises the question of whether there is anything that can be done. In the face of such broad continental, indeed global, trends it is easy to feel powerless. But as Margaret Mead once said, “Never doubt that a small group of thoughtful, committed, citizens can change the world. Indeed, it is the only thing that ever has.” The challenge is for us all to do what we can, and have faith that it will build up into something that is more than the sum of its parts.

With that in mind, a few weeks ago I resigned my position with the Daily Nation newspaper, along with seven other columnists. Since then, there has been a fair amount of speculation about why we went, and what our motives were. The Daily Nation was understandably upset, and a number of pieces have emerged that have criticised our decision, going to great pains to point out that those who resigned had been well treated by the paper. This is largely true, but it misses the point.

We did not leave because we felt that we were being censored ourselves. Rather, we left because we wanted to make a point about the injustice done to other Daily Nation colleagues. Our concern was not that we were being bullied or silenced, but that the newspaper was being hollowed out around us. If we did nothing, we thought, we would soon find that we were marooned – our voices drowned out as the default mode of the newspaper became increasingly pro-government or, perhaps more accurately, afraid of the government.

If that trend had gone unchecked, we would have been left as the fig leaf legitimising the internal decay of a once great newspaper.

In doing so, we were not motivated by partisan concerns. Despite what some of our detractors would have you believe, we all came to this decision through very different thought processes and personal journeys. Indeed, there are many issues on which we simply don’t agree. But one area of common ground was that we wanted to strengthen the position of the many brilliant and dedicated journalists working for the Nation Media Group who are fighting for its independence from the inside. Our hope was that our actions would highlight just how much the current approach is hurting the Nation in terms of credibility and sales, empowering its many brave editors and reporters whose hearts are in the right place to win out.

In other words, we resigned not to kill the Daily Nation, but to try and save it.

*Much of the data used in this piece was collected by the Committee to Protect Journalists. You can support their work by donating here