The False Narratives That Stand in the Way of Our Future 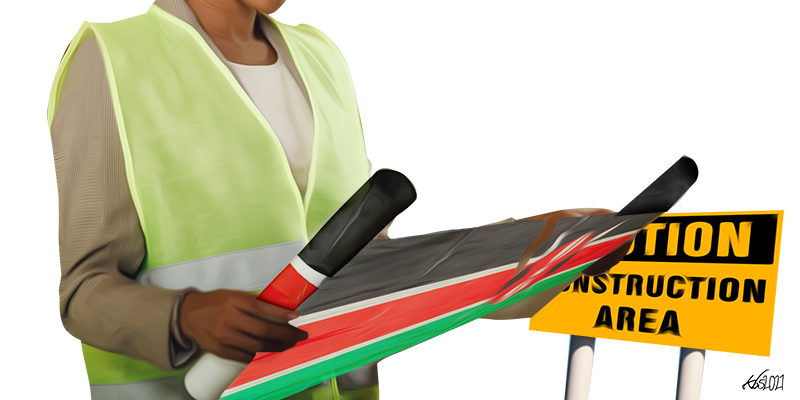 Over the last few years, I have come to understand at least three narratives that some Kenyans use to wish away the contradictions of the Kenyan state. No matter how much such Kenyans are presented with evidence of changing times or with history that gives a different perspective, they will repeat these narratives louder to drown out the other voices.

​Behind all these narratives lies an effort to wish away the fragmentation of the people by the Kenyan state. But, more than that, these narratives are protected by the curriculum of the public schools which does not allow the teaching of the arts, and particularly the teaching of history. Kenyans are thus denied the opportunity to develop their intellectual capacity to understand not just the limitations of the Kenya state, but to understand the reality of the world in the 21st century.

These narratives are: Social issues such as crime, truancy and drug abuse afflict young men due to the neglect of the “boy child” (by whom, it is never clear), which in turn is due to advocacy for girls by Western feminists; Tanzania is communist and Kenya is capitalist; more Kenyan students need to study the sciences because that’s what the job market needs.

Kenyans use the narrative of the neglect of the boy child to deflect questions that affect mostly poor young men, such as police brutality against men, the flawed masculinity promoted by the Kenyan male elite, and the culture of rape that is not only sexual but also financial, intellectual and environmental. By avoiding such analysis, we evade acknowledging that although Kenyan men dominate property ownership and positions of power, those men belong to a socio-economic minority.
​
Not dealing with the interaction between gender and class allows us to cling to the hope that manhood can be a ticket for all Kenyan men to gain same access to the wealth and power enjoyed by the ruling class. The reality is, though, that this model of the state cannot accommodate more than a minority with that much wealth and power. But rather than dismantle this exploitation, Kenyans would rather blame girls. Imagine that. We adults are blaming children for our failure to establish an equitable society.

This distraction of Kenyans from the inequality of the state is further integrated with race through Kenyans’ focus on Western feminism. Ironically though, the goal of Western feminism is exactly that: to silence questions about the Eurocentric global system and instead simply negotiate white women’s place in it. And this argument has been made for decades by scholars like Micere Mugo, Oyeronke Oyewumi, Ifi Amadiume and Amina Mama, while men such as Ousmane Sembene and Thomas Sankara have tied women’s freedom to African freedom as a whole. However, Kenyan education is grossly Eurocentric. Many graduate students have never heard of these names, and what many Kenyans know of feminism is what they read from white American evangelicals, whose thoughts are shared every Sunday on many Kenyan pulpits.

The narrative of communist Tanzania vs. capitalist Kenya is equally twisted, especially when one remembers that the Berlin Wall fell twenty-seven years ago and the Soviet Union collapsed twenty-five years ago. However, holding onto this myth serves a purpose: it helps us avoid asking questions about our country’s internal exploitation and poor foreign policy choices. The narrative also comforts a certain superiority complex that is rooted in eurocentrism. We think we’re better than Tanzanians because we’re richer. However, we forget that the “we” who are richer are a minority of Kenyans, all thanks to tribalism, which enables us to “share” in the wealth of the privileged few in our respective ethnic groups. In tribalist thinking, kumeza mate ndiko kula nyama, to swallow saliva is to eat meat.

We can also avoid the reality that Tanzania may have a point in questioning the Economic Partnership Agreement (EPA) that Kenya has enthusiastically signed with the European Union. Already, there are credible voices, like former president Benjamin Mkapa and scholar Horace Campbell, indicating that the EPA will benefit only the flower industry (whose members include colonial settlers), and will take the rest of Kenya to the cleaners. But instead of us asking whether our own government signed the EPA agreement in the interests of the Kenyan people, it is easier to dismiss Tanzania as “communist” and “cold” towards Kenya.

We have also not come to terms with the history of Kenya’s anti-African foreign policy choices since independence. In word, Kenya publicly declared opposition to apartheid, but in deed, Kenya did not support the ANC and was, in fact, trading with apartheid South Africa. Tanzania, on the other hand, was a base for the ANC. A similar thing happened with the genocide against the Tutsi in Rwanda. As Tanzania welcomed Rwandan refugees, Kenya was home to the rich génocidaires (President Juvenal Habyarimana’s wife was one of those who fled to Europe through Kenya). At the height of the killings, Kenya sent a planeload of Tutsi refugees back to Rwanda. What happened to those refugees is anyone’s guess.

In the war against the arts, the narrative of science vs. the arts deflects responsibility for a crawling economy from the leaders to the people. If graduates are jobless, the narrative implies, it is because the graduates are studying the wrong subjects in school, not because the greed and stupidity of the Kenyan ruling class has been an obstacle to the economy expanding to accommodate all talents and professions. That is why the truth that medical and engineering graduates are not getting employed, and the few who do find work are not getting paid, has not yet entrenched itself in public conversations about careers in the sciences.

The problem is that this narrative against arts education is stuck in the industrial era (yes, the 19th century in the West, not Africa), where the governments and industries expected mass education to produce workers for factories. The world has since moved on to the information age, where the automation of knowledge by computers means that “progress” is determined by access to information. And experts are now talking of a conceptual age where what counts is not only information, but also the ability to use it creatively, otherwise called innovation.

In the war against the arts, the narrative of science vs. the arts deflects responsibility for a crawling economy from the leaders to the people.

The division between arts and sciences is traumatizing, even to the individual learner. I remember our frustration as form five students being forced to choose between sciences and arts. A number of us actually loved mathematics and scored distinctions in O levels, but we were told that if we did mathematics we had to do biology, chemistry or physics, in which we were not interested. Can you imagine what innovations would have come out of my generation had we been allowed to do both arts and science, even at university?

What this means is that the whole science vs. arts narrative is literally useless. And yet, the Jubilee government has entrenched this schism, with the Education Cabinet Secretary and his boss, the Deputy President, attacking arts programmes as irrelevant to the country’s needs. As if that is not bad enough, the proposed new curriculum talks of separating schools into “talent” and “technical” schools.

This country does not need to widen this schism in knowledge but to narrow it, so that our youth learn to combine data and information with creativity, and in so doing, craft solutions at both the macro and micro level. Kenyan students should be able to do mathematics and linguistics, or music and physics, agriculture and fine art, or history of the sciences, if they so wish. But instead of bridging this gap, the government is stuck in the 60s, when it saw science and arts as opposite poles.

Worse, the government is basing this division on the equally archaic idea of the job market that belongs to the days of independence. In those days, the government was so desperate for Africans to fill the posts left behind by colonialists that people were guaranteed jobs even after primary school, and they would rise up the ranks in those careers and then retire. But that era no longer exists. These days, a growing proportion of people are in careers different from the ones for which they were trained, and are likely to have changed jobs at least four times before they retire. The job market is no longer the same. What we need is a critical and creative reflection on what these changing times mean for education.

Dealing with our contradictions

​We Kenyans need to stop hiding behind dated narratives of colonial tribalism and the Cold War and develop the guts to confront the good, the bad and the ugly of our history and our national consciousness. We must not shy away from asking ourselves difficult questions about what colonialism actually did to us, how that colonialism is deeply embedded in the current political culture, and how that exploitation is masculinized and transmitted through the education system. We can get the facts about our oppression from science and the social sciences. But we can only face the accompanying dread and implications for social change through the arts.

Experts are now talking of a conceptual age where what counts is not only information, but also the ability to use it creatively, otherwise called innovation.

We also must realize that the reason successive Kenya governments have deliberately discouraged us from learning the arts, and particularly the history of Kenya and of the African continent, is not because they are concerned with development needs. The political class does not want us to understand the reality that we the people are slaving away to enrich a minority.

The schisms that divide Kenyans from each other along ethnicity and gender, or separate Kenyans from their neighbours, or delude us that our professions have no link to our talents, all serve to prevent us from making connections across time, space and cultures. We understand our realities only with a healthy dose of the arts, and we can only craft solutions by weaving our creativity with the tools of science and all the knowledge available to humankind.

​We must therefore reject these narratives that fragment the Kenyan psyche along gender, ethnicity, religious and professional lines. Let us choose to uproot patriarchy, misogyny and religious bigotry, to understand our continental history, and to intertwine our artistic skills with our scientific insights. Only then can we, as Thomas Sankara said, dare to invent the future.