Life at the End of the American Empire 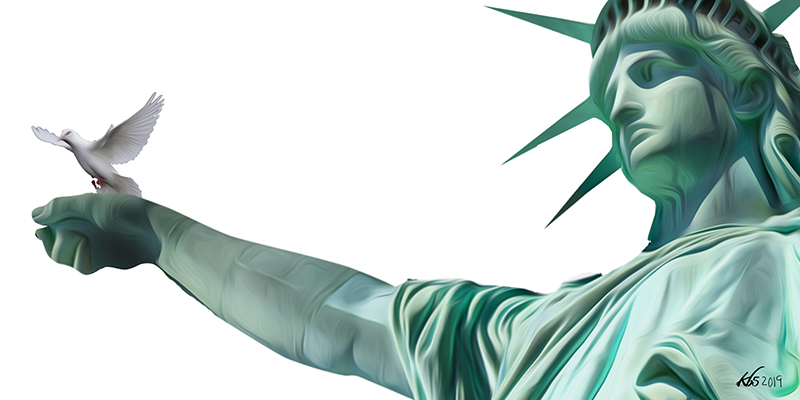 Americans have a knack for demonstrating, in spectacular fashion, that they possess neither the political language nor the maturity to address the crises of our time.

As the climate catastrophe hurtles past the point of return, US pundits are content to debate “cancel culture.” As levels of economic inequality soar from the obscene to the unfathomable, half the political class obsesses over Russian meddling while the other half nurtures conspiracy theories about the “deep state.”

Critics have long characterised American politics as a form of mass paranoia. Witnessing recent events, one is reminded that American identity itself is an act of self-deception. As a society we remain trapped in petulant adolescence, incapable of and uninterested in developing any real awareness of ourselves.

For decades this willful ignorance made the US an especially dangerous superpower. Now, as the decline of US empire accelerates, our practiced innocence is fueling a sense of collective disorientation and despair.

Critics have long characterised American politics as a form of mass paranoia. Witnessing recent events, one is reminded that American identity itself is an act of self-deception

To grasp our predicament we must recognise modern American politics as a clash between competing delusions. The populist insurgents of the right pursue one set of ideological fantasies while elite apologists for the status quo pursue another. Even as political polarisation increases, both camps embrace the myths of American virtue that perpetuate our national blindness.

The mob that recently stormed the Capitol is a toxic outgrowth of the cult of lies on the right. Among those lies is the assertion that “Blue Lives Matter.” Americans who watched footage of the Capitol invaders pummeling cops with flags and other objects (one officer was bludgeoned to death with a fire extinguisher) might wonder whether “Blue Lives Matter” is actually a principled declaration of support for police, rather than a cynical effort to subvert Black Lives Matter and justify racist state terror.

Many antiracists have long known the truth. Many of us recognise, as well, something that few Americans will ever discover; namely, that White supremacy does not love White folks. Whiteness is simply a method of conquest. It is a necessarily antihuman mode of domination. When the hordes at the Capitol called for the head of Mike Pence, a great White patriarch, and erected gallows outside the halls of Congress, they were enacting a philosophy not of tribal loyalty but of capricious and unrelenting violence.

If the forces on the right wing are driven by lies, the moderate defenders of liberal democracy are no less devoted to deception. Business and political elites condemned the Capitol siege in the wake of the attack. Yet they routinely launch their own “raids” on the commons through the practice of corporate sovereignty and unrestrained capitalism. Some members of the ruling class have framed Trump’s departure from the White House as an opportunity to restore the rule of law and the prestige of American democratic institutions. They cannot be serious. The net worth of US billionaires has risen by a trillion dollars since the pandemic began. Precisely which democracy are Americans supposed to reclaim?

In reality, US plutocrats can offer only a more polished racial capitalism as a remedy for the vulgarity of Trumpism. Their revitalized America will continue to imprison legions of black people, hunt undocumented immigrants, and wage unrelenting war on brown populations abroad. But it will do so under an African American woman vice president and a rainbow cabinet. Voila. White supremacy lite.

If the forces on the right wing are driven by lies, the moderate defenders of liberal democracy are no less devoted to deception. Business and political elites condemned the Capitol siege in the wake of the attack. Yet they routinely launch their own “raids” on the commons through the practice of corporate sovereignty and unrestrained capitalism.

The poverty of ideas in the political arena reflects the barbarism of our historical moment. While Trump’s minions promote authoritarianism and jingoism, many of their ideological opponents within the Democratic Party offer equally bankrupt solutions, from a return to “civility” to the rebuilding of national “unity.” (We are asked to forget that it was decades of “unity” between the Democrats and the billionaire class that helped produce the social and economic dystopia we now inhabit.)

Thus do the reigning forces in American political life—the populist right and the liberal center—sustain their crusades of disinformation. Both factions brandish the bloody flag of patriotism. Both long for the revival of a glorious order. Both preach fundamentalist creeds, whether they use the jargon of White evangelicalism or that of underregulated markets. And both are doomed. They are combatants on the deck of a sinking ship.

In truth, the disintegration of American civilisation has been evident for some time. The perverse murders of George Floyd and Breonna Taylor were symptoms of deeper pathologies. Our trillion dollar military budget, our gleeful binge of fossil fuels, our support for the occupation and degradation of the Palestinian people—all signal the malignancy of a decadent and cruel nation.

In reality, US plutocrats can offer only a more polished racial capitalism as a remedy for the vulgarity of Trumpism. Their revitalized America will continue to imprison legions of black people, hunt undocumented immigrants, and wage unrelenting war on brown populations abroad.

Meanwhile our intellectual decay intensifies. Capitalism was never going to be satisfied with just seising our social wealth. It has gutted our cultural and educational institutions as well. Small wonder most Americans are strangers to critical thought, and are unable to perceive or meaningfully address the social contradictions that shape their lives. Absorbing the ideas of their religious and political leaders, they find themselves searching for meaning in gospels of prosperity and theories of lizard men.

There may still be an alternative to bewilderment and depravity for the American masses. Recent months and years have witnessed promising countersigns. Popular antiracist and environmental movements reinvigorated our traditions of dissent. Attempts to organize Amazon warehouses, fast food chains, the ridesharing and tech industries and other stubbornly antiunion establishments raised the prospect of renewed worker power. Despite the social devastation of the coronavirus, a period of extreme isolation and anxiety spawned mutual aid projects and tenant struggles.

Progressive dissidents and workers may yet draw on these expressions of solidarity to reconstruct a fractured republic. As feckless Joe Biden takes office, he and his administration should be greeted by waves of radical agitation. We should expand resistance to austerity and endless war, even as we escalate campaigns for climate repair, Medicare for all, living wages, student debt cancellation, and equitable vaccine distribution. Quests for human rights and dignity may not heal America, but they may well preserve some semblance of grace as our society collapses under the weight of its lies.