Beyond the Hustle and Towards a New Philosophy for Agriculture 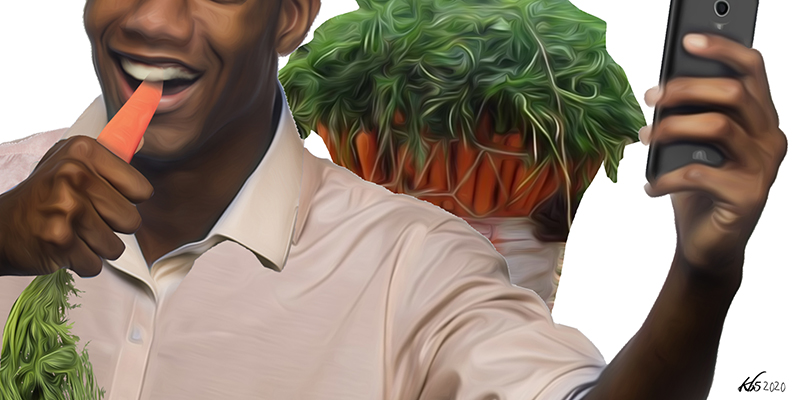 “A Global Food Crisis Looms”, headlined the New York Times in April 2020, drawing attention to the millions of vulnerable populations around the world facing hunger exacerbated by the COVID-19 pandemic. In Kenya, “We fear hunger more than corona’’ is now a common refrain among the urban poor who earn a living in the informal sector. The COVID-19 crisis has revealed deep structural and policy fault lines in Kenya’s food systems.

In the 2019 Global Hunger Index, Kenya ranked 86 out of 117, a position categorised as serious. But long before COVID-19, Kenyans have endured hunger and famine attributed to climatic factors, the rising cost of basic food commodities and a fractured food distribution system. In Nairobi, where 60 per cent of the population lives in informal settlements, rising prices of basic foodstuffs have reduced millions to a hand-to-mouth existence.

After a three-month restriction of movement out of Nairobi was lifted, a number of my cousins and friends told me that they were headed straight to their rural homes to set up food security bases. Among the urban middle class for some of whom it had formerly been a side gig, agriculture has now evolved into the main hustle and as Dauti Kahura has reported, they can now be found parked by the roadside, selling fresh produce from the boots of their cars.

The government’s handling of the coronavirus pandemic has turned a health crisis into a security and corruption problem that is putting the most vulnerable at risk. In the midst of an unprecedented pandemic, Kenya’s political soap opera goes on uninterrupted as the media focus remains locked on the rivalries of the wealthy 1 per cent.

Under these circumstances, to escape the city is a matter of pragmatism as writer Alexander Ikawah observed in a recent article. Inhabitants of African cities have one foot firmly planted in a rural village somewhere, ready to seek refuge at “home” if the city turns hostile. And so, as the labour market struggles and industries shed jobs, many Kenyans have fled Nairobi as a temporary measure, retreating to the security of the rural areas where ancestral land provides a buffer against hunger and guarantees the basics of living and rent-free shelter.

A day before restriction of movement was lifted, my cousin Oluoch sent me a message telling me of his plans to go back home to the village to start work on the shamba. Oluoch is a father of four children who has stopped hedging his bets on things returning to “normal”. He got me thinking about my own small rural farm 7,000 kms away as I cycled along a straight, narrow road cutting through farmland in the Dutch municipality of Amstelveen, 10 kilometres south of Amsterdam.

Sheep and diary cows grazed on pasture as ducks swam in a canal in the early summer sunshine. I stopped to take a picture of this idyllic scene and sent it to my cousin Oluoch who promptly replied, “Ondiek, we have to learn how to farm like the Dutch. This is the future”.

As small-scale, part-time farmers who had inherited family land in our rural homes, we had believed we would be the generation that would adopt modern farming techniques, our motivation for commercial agriculture driven by the promise of high yields and maximum profit, just like the Dutch, we imagined.

The Netherlands is a flat country of green fields stretching far off into the distance, subdivided by water canals and fences in a symmetrical pattern. From the air, the land resembles a huge chessboard. The country has one of the world’s most efficient agricultural and food production systems and is the world’s second largest exporter of agricultural produce after the United States, whose landmass is 237 times the size of the Netherlands. In 2019, Dutch exports of agricultural products were worth 94.5 billion Euros.

The success of agricultural productivity in the Netherlands is buttressed by science and innovative solutions developed by institutions such as the Wageningen University, one of the world’s top agricultural institutes. Here a brain trust is pioneering the thinking to meet the challenge of feeding a global population expected to exceed 9.7 billion by 2050.

The story of the Netherlands agricultural revolution can be traced back to 1888 with the formation of the Heidemaatschappij, the Association for Wasteland Redevelopment that introduced the reclamation and cultivation of wastelands by improving the soil quality of vast areas of heath. The Heidemaatschappij laid the foundation for a new culture of farming, based on generating high yields from fallow and neglected land and the input of new knowledge and skills. Land consolidation became a matter of industry policy, combining fragmented pieces of land and taming idle land around the country for agricultural exploitation. The winter famine of 1944-45 that followed the end of the Second World War and led to the death from starvation of 20,000 people, created the motivation to find a lasting solution to food insecurity. The result is the grand design of the country’s landscape with geometric precision and infrastructural support, roads and water, and the move from small, mixed agriculture farms to the consolidated mono-cropped large farms that define contemporary Dutch agriculture.

The major cost of the green revolution has been the disappearance of nature as the practice of monocultures has led to a visible decline in animal and plant biodiversity. In a series on nature curated by Amsterdam’s De Correspondent, writer Jan Van Poppel investigates the Dutch policy on nature, which he describes as little more than putting a fence around a patch of green and building on the rest of the country.

The natural environment in the Netherlands is almost entirely lost, and what appears to be natural is in reality an elaborate environmental design, a kind of colonialisation of the natural world. As an example, the Amsterdamse Bos, a forest that sits between Amsterdam and Amstelveen that measures over 1,000 hectares (equivalent to the size of Karura Forest in Nairobi) is man-made. All the trees were planted in the 1930s as part of a work-relief programme.

The Netherlands is now proactively dealing with the negative consequences of agriculture monocultures, applying a stringent pesticide policy, cutting down on nitrogen emissions from livestock operations and facing up to the problem of ground water pollution.

In 2019, the Dutch government put forward a proposal to limit nitrogen emissions that had hit crisis levels by reducing livestock-holding farms, triggering national protests by farmers who mobilised to defend livelihoods that were threatened by the new environmental pollution rules. They used tractors to cause traffic jams and occupied public spaces to give voice to their plight and counter the stereotypes that single out farmers as environmental polluters; the agricultural sector is the second leading cause of environmental pollution after the transport sector.

As an amateur farmer who arrived in the Netherlands brimming with the ambition to learn the best practices I grapple with this contradiction. While the Netherlands is without doubt a leader in efficient agriculture, the focus on volume, efficiency and profit has produced negative consequences that can no longer be ignored. This is the model many small-scale farmers in Kenya aspire to but I am no longer a true believer in intensive agriculture as a model for small-scale farms.

Small-scale farming in Kenya accounts for 75 per cent of the total agricultural output and meets 70 per cent of the national food demand, so I know I am part of an important constituency. The challenge of my generation, those with access to land under 3 ha in size, is to craft a new farming philosophy that is built on progressive ideas through investigation, dialogue and exposure to alternative sources of knowledge grounded in the African experience. We need more philosophers and fewer technical experts to redefine what we call sustainable farming. Africa’s own knowledge systems and philosophy in agriculture are held in the memory of a generation that is dying out and dismissed as backward. Yet my grandmother’s practices resonate with those of emerging natural farming systems around the world that espouse new ideas grounded in the environmental, social and historical realities of the non-western world.

In the work of Masanobu Fukuoka, a farmer and philosopher from southern Japan, I encounter farming concepts of my childhood rural experience, farming techniques that used no machinery, no chemicals, involved little weeding and that are now back in vogue, in particular in the permaculture concept that advocates for the harmonious integration of the environment and the people.

Where land is valued as a collective resource that sustains a community, its conservation and sustainability become sacred, as opposed to being merely the source of perpetual extraction of profits. Organisations such as Survival International are involved in advocating for the human and territorial rights of indigenous communities that are under attack from the international barons of the conservation industry who are destroying their cultures and forcefully removing them from territories that they have inhabited and conserved for generations. Scientists studying forest systems have only in recent decades come to acknowledge the role of long-forgotten generations of indigenous communities of the pre-Columbian era and their positive impact on the Amazon forest. The role of forest conservation and reforestation to mitigate climate change is mainstream knowledge in Kenya today as a result of concerted mass awareness campaigns but trees are just one aspect in an elaborate ecological system.

So, as custodians of the land, what becomes our mission? To be socially engaged and philosophically grounded, my farming decisions must consider the long-term consequences of the choices I make.

The principle of sustainability guides the needs of the present without compromising the needs of future generations. This involves thinking beyond consumption-oriented values that are dictated by our industrial economies to evolve a deep ecological philosophy that challenges the toxic ideas of dominance, colonialisation, exploitation and extraction where nature is viewed purely as a resource repository to be conquered and dominated.

Nature is the life source and, beyond the concept of mere conservation, an eco-pedagogy is needed to transmit culturally relevant forms of knowledge. There are ideas out there—such as Arnes Næss‘ Deep Ecology, Bill Mollison’s Permaculture, Masanobu Fukuoka’s, One Straw Revolution, the Slow Food movement—that all share a philosophy and a set of principles that place humanity and its connection to nature at the core of enlightened agriculture.

Chinese artist, activist and filmmaker Ou Ning—whose work titled, The Bishan Commune: How to start your own utopia explores ideas for an alternative community in rural China—has become a leading voice in the new rural reconstruction movement at the forefront of reimagining rural-urban relations. The power of narrative is what artists and thinkers use to weave alternate realities to help societies reimagine the holistic value of small-scale farming and eliminate the colonial mentality that views the rural countryside as the segregated homeland of a silenced underclass. The COVID-19 crisis presents an opportunity for artists to lead a call for a return to the countryside and to renew the rural-urban relationship as a mutually beneficial support system. Philosophers have to deepen their thinking on the fundamental root causes of food insecurity and re-imagine new systems by returning to basic values and practises.

For a generation undermined by the immorality of policy makers and the political leadership’s bankruptcy of ideas, this global crisis is an opportunity to meet the challenge of truly achieving food sovereignty and to resist the allure of the industrial model as the only one suitable for the development of small-scale agriculture.