Eating Our Own Flesh: Corruption as a Form of Cannibalism 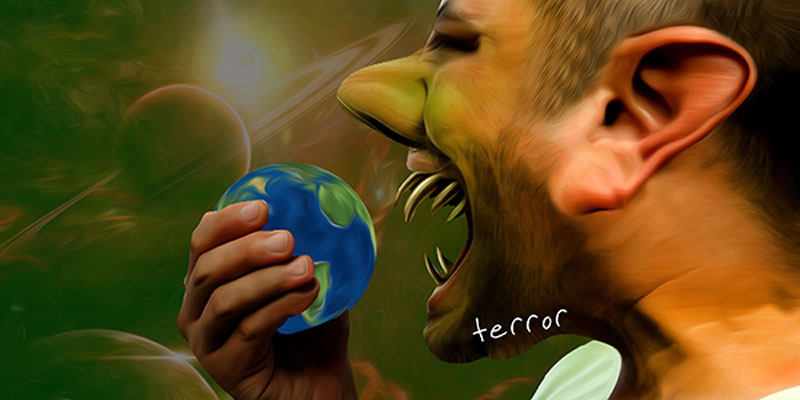 Corruption is a political vernacular in Kenya today, as Keguro Macharia once described it. In public discourse, corruption is described as something both pervasive and cunning. You get a sense of this in some of the metaphors that we use to describe it: “cartels fight back” or corruption is a “virus” or a “cancer” that has taken over the country’s body politic. The metaphor of cancer is a particularly intriguing one, as it simultaneously renders corruption as invisible, powerful and biological.

The effect of this metaphorising of corruption is that it makes the phenomenon difficult to conceptualise concretely. It has suffered an unfortunate definitional flattening, a slippage which this article will attempt to address. We need the definition of corruption put back into sharp focus so that its contours, its peaks and troughs, are clearly accentuated. Only then can we begin to figure out a way through this moral morass.

First, the misconceptions. What is corruption? Is it that young girl in Machakos praying that her brother, a police constable, will finally be deployed to a route rich enough in opportunities for extortion so that she can finally finish her course at the University of Nairobi? She has already lost a year. Is this girl, or her brother, corrupt?

Is corruption the kickbacks that a state employee extracts from suppliers to supplement his income, which has been stretched to breaking point by a clan of dependents? What about paying extra to bump your loved one up a surgery waiting list at a public hospital?

Or is corruption something more formally executed, using laws, imprests and tenders? Is it the transfer of taxes to private use to fund a legislator’s trip to get cancer treatment abroad — over and above his taxpayer-funded premium health insurance scheme? Or is it the transfer of strategic national resources, like oil blocks, mining licences and public utilities, into private hands?

What makes one describe a traffic police officer taking a Sh50 bribe from a matatu driver as corruption but the collusion by state officers to incur public debt at the scale of an entire country’s GDP as macro-economic management? And what makes the transfer of government trustee land into foreign private hands “Foreign Direct Investment”, while the same transaction by a native is termed as a “land grab” i.e. corruption?

Is it the scale of the land in question, such that acquiring 100,000 hectares is an “investment” but ten hectares is a “land grab”? Or does it have something to do with power, where the passport of a (former) imperial power paves the way for the individual holding the said passport signalling to local elites that this is the master’s son and we better make room for him or else prepare for violent expropriation and/or occupation?

Where is the line? What are the criteria? Who decides? Better yet, who should decide?

Let us turn to some linguistic definitions.

Corruption is archaically and simply defined by the Oxford dictionary as “a state of decay or putrefaction”. But today’s use of the term has redefined this term and given it a completely different meaning, just like other modern-day terms that are used primarily in their conceptual rather than linguistic meaning, including Terrorism, Extremist, Human Rights, Black, White, etc.

So, what is corruption in its politically loaded sense? Yasmin Dawood, in her classic paper “Classifying Corruption”, captures it as follows:

Clearly, corruption is a loaded term that can be unpacked extensively. But the single and most broadly used definition of corruption is articulated by Jakob Svensson as follows: “The misuse of public office for private gain.”

Most of the literature available on corruption engages the problem from the level of its outcomes – in other words, on its results, i.e.  “private gain”. But there seems to be little effort at trying to analyse the root causes.

Given the widespread nature of corruption, and given that it has no definitive social differentiators like class, income, education level or geographical region, it follows that the possible causes are either intrinsic (related to the nature of man or woman) or systemic (attributable to the prevailing socio-political and economic environment).

The intrinsic motivation can be explained in a general sense by human beings’ deeply instinctive proclivity to possess. In short: greed. That is simple enough.

But looking at all the scholarly definitions of corruption, what we witness in Africa defies any of those classifications completely.

Nigeria’s Sani Abacha did not benignly “misuse public office for private gain”; he swept the treasury coffers clean. He decimated the public office. Kenya’s president from 1978 to 2002, Daniel arap Moi, and his coterie of ministers did not “quid pro quo, influence or distort”; they ingested entire institutions.

The same goes for the successive administrations of Mwai Kibaki and Uhuru Kenyatta. Their voracious troops of army ants have left no tree standing, literally. No tree in the forest was considered too sacred to spare. Their appetite is unlimited.

Nothing was/is too big or too small, not the strategic grain reserve, not the sports kitties (one of the few remaining routes out of poverty), not even programmes like the Youth Fund, the National Youth Service or Kazi kwa Vijana. (As a resident of Eastlands I can attest that these programmes had a direct impact on the ground, with all the associated positive results of wealth redistribution e.g. drastic drops in crime, increase in economic activity, rise in optimism.)

None of this is corruption, not by a mile. It is institutional cannibalism.

Given that it is our own, our best and brightest sons and daughters who are cannibalising our own institutions, I will go further and describe it as a socio-pathological condition that I am calling autosarcophagy – an amalgam in Greek of “eating one’s own flesh.”

This makes it a sociological condition. Why have we failed to evolve from a primitive agrarian society? It is obvious from observation that the trappings of civilization were quickly pasted upon us and this is perhaps why irrespective of our level of education, we struggle to perceive institutions. A native administrator perceives the institutional resources through a primitive instinctive lens rather than through an evolved intellectual lens. Given that the focal point is instinctive, the reaction becomes an irresistible urge to consume or possess this honeycomb, as instincts cannot perceive a discarnate boundary such as that of person, institution and/or system.

Granted, there is scholarly consensus that Homo Economicus (the latest and arguably the most wicked of all the evolutionary stages of mankind), is a sociopath, whose folly was preciently captured by Jonathan Swift in his 1729 satirical article suggesting that the impoverished Irish might ease their economic troubles by selling their children as food for rich gentlemen and ladies.

Still, the existence of this disorder in the West should be no consolation because Homo Economicus in Western society commits his genocide and fetal cannibalism in the villages of the people of the East and Global South. But African Homo Economicus commits filial cannibalism. How else would we term indenturing our own children as chattel by taking out high interest loans and sovereign bonds on their futures and then diverting those funds into private accounts, or accepting payments to dump nuclear and toxic waste in our backyards?

As for the second systemic cause? Capitalism.

The unstoppable march toward absolute implementation of this pernicious socio-political and economic order portends nothing but misery for humanity. The uncritical application of its core doctrinal pillar that calls for individual freedom of ownership ultimately results in what Marx called “primitive accumulation” and more recently translated by Prof. David Harvey as “accumulation by dispossession”.

In our context, this manifests as the transfer of collective (public) wealth into the hands of private, well-connected owners through privatisation of public resources like water, energy, minerals and public infrastructure, including healthcare and utilities, and the transfer of individual citizens’ wealth into the same private hands through usury, taxes and inflation.

Essentially, this creates a society where the only way one can get bread and water to feed one’s child is by taking the bread and water of someone else’s child. This may be the reason why there is little investment in understanding the root cause analysis of the problem of corruption — it would reveal the witch’s cloven hoof. It is the nature of the beast. It is capitalism.

And as the population increases and the walls around the public’s resources continue to be erected and extended, the masses’ incomes and wealth continue to be systematically harvested through quantitative easing (printing fiat), bonds (usury) and taxes, and then consolidated and transferred to the top through the global banking and financial system. It results in a fight at the bottom that grows ever more vicious, manifesting itself in perpetual war, slavery, dehumanising poverty and misery.

The only way to halt this accelerating bottomless spiral downward is to reject Man as Sovereign, end capitalism and establish a system that will nurture the (collective) Man using divine provision (natural resources), and protecting private property and wealth creation from expropriation by taxation, usury and inflation.