Battered but Not Broken: Resurrecting the Pan-Africanist Ideal 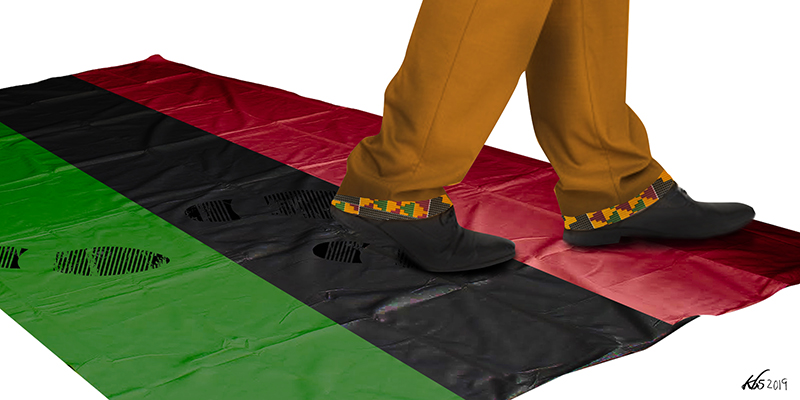 Since the eras of Edward Blyden, W.E.B. Dubois, Chancellor Williams, George Padmore, Marcus Garvey and Kwame Nkrumah, the idea of Pan-Africanism has exercised the minds of blacks seeking to hurl off the yoke of racism and oppression. Each major advocate of the Pan-Africanist creed ended up inflecting it with different personal significations but its over-riding goal of black emancipation and unity remains intact.

Some, like Blyden, advocated a form of classism that demarcated continental Africans from diasporan blacks, with the former relegated to a lower socio-political status on account of their “lack” of modern skills and also their relative unfamiliarity with the Christian faith.

Times have since changed.

Arguably, Pan-Africanism could only have emerged beyond the shores of Africa. The continent’s riotous diversity, comparatively as dense as its famous jungles, aided the divide-and-conquer tactics of its numerous enemies. The multitudinous nature of its languages, historical traditions, customs and ethnicities meant that Africa never learnt to speak with “one voice” as it had historically spoken with cacophonies of voices. Its diversity in all things was simply astounding.

However, blacks in the diaspora – under the shared horror of slavery and plantation cruelty – were forced to unite through the creolised languages and cultures they had to develop. In essence, their shared experiences thrust them together rather than divided them. The abjection of their lives in which they were losing their original languages, cultures and spiritualities pointed in only one direction: the white oppressor. Out of those unimaginable depths of misery, their primal cries of agony struck a chord of unity. Expediency must have dictated that their collective pain could only be assuaged through the forging of unified black bonds.

Sometimes the notion of freedom within the definition of Pan-Africanism acquires metaphoric connations; freedom is not merely the release from forms of physical bondage; it can also attain subtler and deeper levels, including psychic freedom; a connection with, and an unrestrained exploration of the fact of blackness, which ultimately ends in the acquisition of more potent spiritual meaning.

The slave ship, rather than being merely a vessel of physical bondage, becomes a pilgrimage into the meaning of blackness, the eternal struggle for its recovery amid elemental oppression in which a hard-won strain of blackness is received as a prize of victory that comes at enormous cost, and which subsequently serves as a beacon for all those seeking freedom in whatever form.

Sometimes the notion of freedom within the definition of Pan-Africanism acquires metaphoric connations; freedom is not merely the release from forms of physical bondage; it can also attain subtler and deeper levels, including psychic freedom…

In this historical and precise moment, Pan-Africanism finds its essence, which it can only retain momentarily, for it must delve below to rescue numerous victims of oppression, thrusting and thirsting for the purity of its strength most often without relief. And when it descends from its enormous spiritual height, when it sheds ineffable spiritual sustenance for realpolitik, it also finds itself needy without its former spiritual glory. It must contend with the practicalities of gaining electoral votes, problems of inadequate and poor housing, chronic poverty and unemployment, teenage pregnancy and single-headed households, widespread alcohol and drug abuse; problems with severe cancerous impact on black communities.

The crisis within Pan-Africanism

Pan-Africanism needs to learn to deal with these myriad problems in order to acquire more power, the sort of power that divests it of its strain of purity and which also denudes of it of evocative power. Indeed the power of Pan-Africanism is largely evocative, which brings us to a problem within Pan-Africanism.

In Africa and in the diaspora, slavery and colonialism left in their wake utter wreckage and chaos. The effort to re-build chaotic black communities all around the world entailed more than just the slogan of Pan-Africanism. It was akin to thrusting one’s head into a tunnel in order to cope with a multitude of practicalities. It meant, in many instances, a disavowal of the global in favour of the local, a severance from the beatitudes of the spirit for the urgent demands of the body, a re-configuration of the contest between ideological imperative and metaphysical comfort.

At the end of the day, Pan-Africanism had to recede to make way for shoring up shattered black communities; it entailed a retreat into the soul-crushing labours of the local.

And necessarily, the retreat into the local meant a diminution of the Pan-African appeal. By orientation, Pan-Africanism is global; it had sought to end the oppression of blacks in the world wherever it existed, and so it had to over-reach itself in order to gain a desirable degree of ideological purity.

But this over-reaching tendency has had some disastrous consequences in the field of politics. Kwame Nkrumah of Ghana, a noted apostle of Pan-Africanism, is often criticised by Ghanaians for not paying enough attention to them. A common assumption is that there were more Nkrumahists who were non-Ghanaians than Ghanaians themselves. Arguably, the Ghanaian leader struggled to no avail to strike the appropriate balance between the local and the Pan-African.

More recently, Thabo Mbeki of South Africa has labelled himself a scion of the African Renaissance and has sought, amid great difficulties, to realise the Pan-African dream in a territory tragically rife with Afrophobia. Afrophobia (fear of other Africans) is on the rise in South Africa as the country battles chronic crime, massive unemployment and its economic “junk” status. In such a context of political and economic meltdown, Pan-Africanism would obviously be a hard sell.

At a crucial political moment, Nkrumahists were probably better off being Ghanaian citizens than were non-Ghanaians in order to perform the gruelling local work of clawing inch by inch towards the Pan-African apex. Similarly, Mbeki’s political routing at Polokwane in 2007 spelled a major setback for the Pan-African initiative in South Africa. Within the ruling African National Congress (ANC), Mbeki’s supporters were muscled out of political reckoning and hounded into submission or institutional exile. And so there was virtually no base upon which to build from the bottom up, hence the frequent violent outbreaks of Afrophobia and other officially sanctioned forms of social exclusion.

Among the generation of the so-called South African “born-frees” (born post-1994), a disconcerting form of political parochialism has taken root, encouraged by older political opportunists. Often downplayed is the fact that the anti-apartheid movement had to acquire a global appeal fostered by a robust Pan-Africanism to be truly effective. In moments of insane xenophobic rage, this history suddenly vanishes as if the South African liberation effort had occurred in total isolation from the rest of the world.

There have been innumerable international conferences organised around a basic Pan-African intent or initiative where most of the delegates appeared to be grasping at vague, illusionary cosmic straws. But the real task lies in re-modelling local institutions, politics and aspirations to align more directly with the Pan-African dream.

Among the generation of the so-called South African “born-frees” (born post-1994), a disconcerting form of political parochialism has taken root, encouraged by older political opportunists. Often downplayed is the fact that the anti-apartheid movement had to acquire a global appeal fostered by a robust Pan-Africanism to be truly effective.

There always seems to be a discernible disconnect between dream and reality and these international platforms seemed to be opportunities to indulge in the lambent mirage of the unattainable before we returned to the grim and drab realities of our everyday lives. In chasing after the dream, we get to experience the fleeting joys and headiness of spirituality and ideology all at once.

It appears Pan-Africanism would have loved to work like Zionism, which has a politically, linguisitically, culturally and spiritually unified Israel as its home base. On the other hand, blacks, dispersed as much as ever all around the world, can only claim an Africa splintered as ever by several languages, cultures, faiths, politics, ideologies and (neo)colonialisms, as a possible homeland and even more problematically, an imaginary homeland of the mind.

Embracing our ethnic others

Yet, we cannot afford to succumb to the myopia the situation encourages. The Pan-African dream is a necessary dream and not a costly one. Any appreciable knowledge of African and black diasporic history would immediately reveal this fact.

It is necessary to saddle ourselves with the labours of the local; ensuring that our communities are safe and functional, our schools and health systems work, and that our homesteads are havens of care, decency and productivity. All of this involves unquestionably hard, grinding work. But as we build according to the dictates of the local, we must also ensure that our communities provide comfort and opportunities for our ethnic “others” and black brethren from elsewhere.

The inability to recognise, empathise with, and accept our ethnic others invariably leads to the Hutu-Tutsi genocidal context of 1994 or more recently, Darfur in the 21st century.

And so the conceptual challenge is to locate the cosmopolitan potential deep within the labours of the local. The Indian community activist working assiduously in the traditional Indian settlement of Chatsworth in Durban, South Africa, might be consciously or inadvertently pursuing the Pan-African dream when she embraces racial and ethnic others in the bid to strengthen her community for the good of all.

Wole Soyinka, the Nigerian author and polymath of Yoruba culture never fails to affirm the almost boundless territorial expanse of humanity even as he energetically explores the uniqueness of the Yoruba, his ethnic group. The Yoruba – like the other great West African nationalities, such as the Ibo, Fulani, Asante, Fon, Hausa, Malinke, Wolof, Mende, among others – had been dispersed globally via the transatlantic slave trade. So their descendants can be found in Haiti, Dominican Republic, Cuba, Jamaica, Honduras, Colombia, Trinidad and Tabago, Barbados, Brazil and the United States, amongst other countries. During the course of this global dispersal, they bore with them knowledge of their spiritualities and cultures, a considerable part of which continues to thrive until today.

Due to this kind of history, Pan-Africanism ought to be viable and necessary, but the pursuit of the Pan-African dream must be done in conjunction with the labours of the local; that is, building each little community piece by piece until it links up with the next, and the next, always bearing in mind the links between the local and the global, and that in attending to the tortuous demands of the local, the Pan-African dream will only become possible through the empathetic embrace of our ethnic others.

Perhaps the much-trumpeted Southern African humanistic concept of ubuntu has a lot to offer by way of explanation here. Pan-Africanism has always been over-burdened by the imperative of a strategic vision, or the propulsive romanticism of its dream, or else, the purity of its spiritual antecedents. All of these combined largely account for its abstract identity, which is not always what is required to build communities from the bottom. Only when it attains a balance between tactical drudgery and strategic ambition can it acquire renewed significance.

Due to this kind of history, Pan-Africanism ought to be viable and necessary, but the pursuit of the Pan-African dream must be done in conjunction with the labours of the local; that is, building each little community piece by piece until it links up with the next, and the next, always bearing in mind the links between the local and the global…