Patriarchy and the Biopolitics of FGM 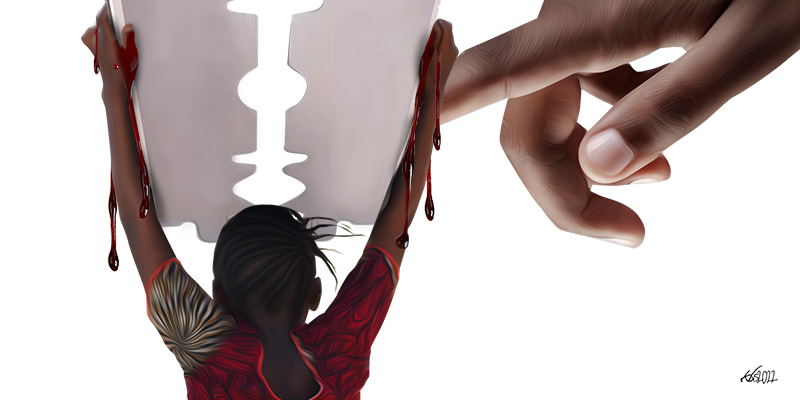 The Female Genital Mutilation (FGM) discourse is complex and often misunderstood. Scholars, activists, and journalists have played influential roles in highlighting the risks of the practice. Many obtain their knowledge about FGM through news stories that often advocate its abolition. Yet few have attempted to grapple with how the biopower of patriarchy contributes to enabling the practice.

The WHO defines FGM as “all procedures that involve partial or total removal of the external female genitalia, or other injuries to the female genital organs for non-medical reasons.”  While many parts of the world still practice FGM, the extent to which the “cutting” is done varies.

The third form, known as infibulation, involves the narrowing of the vaginal opening through the creation of a covering seal. The seal is formed by cutting and repositioning the labia minora, or labia majora, sometimes through stitching, with or without removal of the clitoral prepuce/clitoral hood and glans (Type I FGM). The fourth includes all other harmful procedures to the female genitalia for non-medical purposes, e.g., pricking, piercing, incising, scraping, and cauterizing the genital area.

FGM practice varies by geographical region, but it is also possible to encounter all the forms within one region. The risks associated with all the types vary from excessive bleeding during the procedure, to menstrual issues, to birth complications and even death. Death usually occurs during the operation or later in life due to secondary complications.

While FGM is being fought publicly, it is still widely practiced, albeit in secret, perhaps in “open secret”. Men have played a significant role in forcing women to continue this tradition. In the Somali community, a girl who has not undergone the cut is considered impure and called degrading names. The mere fact that a girl has her genitalia intact is a source of shame to her and her mother.

Traditionally, when a man marries a woman, the mother-in-law gifts the couple a three-legged stool made of wood and hide. If the bride was not infibulated after the cut or did not go through the cut completely, the groom makes a big hole on the hide and places it outside their new home. This is a deliberate attempt to shame the girl and her mother by showing the many visitors that come that his mother-in-law gave him a woman who does not meet “the society’s standards”, i.e. FGM. This has, in turn, driven women to feel the pressure and cut their girls and infibulate them to avoid being shamed when their daughters get married.

The power that the patriarchy holds over women is significant. Michel Foucault called it biopower, which he describes as “power which takes hold of human life”.  He states that “The sovereign exercises his right of life only by exercising his right to kill, or by refraining from killing; he evidenced his power over life only through the death he was capable of requiring. The right which was formulated as the ‘power of life and death’ was the right to take life or let live. Its symbol, after all, was the sword.”

In our case here, the patriarchy is the sovereign, and the symbol is the knife or blade used, and they have the decision to kill or let live. This deadly tradition is what perhaps I can refer to—deriving from Achille Mbembe’s “Necropolitics”—as Necrotraditionalism.

The mere fact that a girl has her genitalia intact is a source of shame to her and her mother.

The patriarchy’s enabled necrotradition takes young lives as many girls die in the process due to excessive bleeding. Rehema Lisale was a thirteen-year-old girl who succumbed to FGM in 2014 in Kajiado County. Her body still lay in a pool of blood while her grave was dug. Deeqa Nuur was another young girl whose life was cut short by the killer tradition in Somalia in 2018. Deeqa’s father, despite losing her, still defended the practice, completely ignoring the role he played in her death.

Deeqa and Rehema are not isolated cases. Many girls still die from the practice, and their deaths are hidden from the public. Though Deeqa’s and Rehema’s killers were brought to justice, many more perpetrators and killers of young girls continue to roam free.

During a cross-border FGM survey that I conducted in Kenya’s Mandera and Somalia’s Bulla Hawo in early 2020, a respondent narrated how a woman’s daughter known to her died from excessive bleeding. When the government of Somalia became involved, the woman allegedly sought refuge in area under the control of the Al-Shabaab terrorist group to avoid arrest and prosecution.

Secondly, the patriarchy’s biopower takes control of women’s sexuality, killing their feelings, never once considering them a woman’s God-given right. It is common belief that mutilated girls do not bring shame to the family because their desires have been tamed.

Deeqa’s father, despite losing her, still defended the practice, completely ignoring the role he played in her death.

In my time in Kenya’s Mandera County where I conducted FGM research, many women narrated the horrible experiences they go through due to this necrotradition. It was clear that the women wanted the tradition abolished but encountered male opposition.

A young woman, “Hafsa”, narrated how horrible intercourse in her marriage was. “It always felt like rape, every time my ex-husband did it. It took me back to the day I went through the cut, but he seemed to enjoy it. He couldn’t get enough of it and when I couldn’t take the pain anymore, I shared the experience with him, but he told me that I am a woman, and I should know my place.”

Maryan Sheikh, a popular FGM activist, has called out men who enable FGM as “covering up their underperformance in bed”. The biggest challenge to her activism is the patriarchy, which calls her names like “Maryan Kintir” (Maryan clitoris).

FGM has killed sexual desire among women, but it is also killing marriages. A 17 March 2019 report by NTV titled Marriage by the Blade talked of how marriages fail as a result of men asking their wives to go through the cut, well into their marriages, and even after the birth of their children. Margret Cheptoo details how men force women to undergo the cut, narrating how a woman told her how disgusted her husband was with her genitalia. He told her to hold her “hanging” clitoris to avoid getting in contact with him during sex. Another, Margret Kipruto, narrated how her daughter lost her marriage because she defied her husband’s order to undergo FGM. “Hafsa” from Mandera, whom I mentioned above, was forced to end her marriage because of the effects of FGM which her husband did not seem to care about.

I once had a conversation with a colleague, whom I had gone to visit following the birth of her child. She was already considering going back to work because her baby was already six months old, and she wanted to put her infant on milk formula. She, however, said that she needed one more month to fully be ready as she tried to “heal” some more. As a word of encouragement, I then mentioned that caesarean section wounds take more time to heal but she explained that she had delivered naturally but had undergone a procedure similar to the one she had undergone during FGM; she had asked her doctor to stitch her a little to reduce the vaginal opening following childbirth.

I did not ask any more questions, but that left me curious about why someone would undergo such a traumatizing experience again. In my naivety, I thought it was just a “cultural thing”. I later learnt that it is a common practice that is done specifically to enhance sexual pleasure for men. In other words, it is “infibulation” as described above, and could perhaps be referred to as “secondary infibulation” in this instance.

The practice makes women relive the painful trauma of FGM. Yet these are women who cannot express themselves for fear of what could happen to them. They are women who suffer in silence and relive all the pain of that fateful day when their genitalia were cut off and fed to the birds.

Patriarchy’s enforced FGM is the ultimate death sentence for women who end up suffering birth complications due to infibulation. The long labour either kills the women or their unborn children succumb to it. This is the ultimate impact of FGM on the lives of the women in the Somali community where women have continued to caress male egos. Men satisfy their sexual fantasies by killing women’s sexuality. They have transformed women into what Achille Mbembe and Foucault describe as the “living dead”.

Sadly, the Somali community will continue to oppress women, killing their will to live. And with the practice now moving to older and married women, once again patriarchy is winning. Only with the abolition of patriarchy among the communities of northern Kenya will this practice be killed.