The Paradox of Donor Funding in Arid and Semi-Arid Kenya 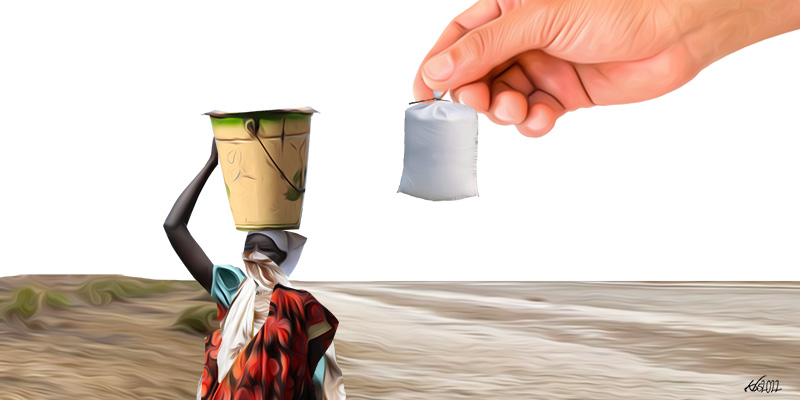 Despite receiving plenty of nongovernmental support to fight poverty, northern Kenya’s arid and semi-arid lands (ASALs) remain poor. According to a 2021 United Nations report, more than 2.1 million people (14 per cent of the population) living in the ASALs of Kenya are food insecure, and this number is projected to rise to 2 million in 2022. A 2018 World Bank report says that an estimated 433 million people live in abject poverty in Sub-Saharan Africa, and while the poverty rate has decreased, the number of poor people has been rising since 1990. In recent years, the critical drivers of increased food insecurity have been the global COVID-19 pandemic that caused economic and political disruptions, erratic rainfall that is poorly distributed in space and time, resulting in poor pasture for livestock, and low livestock prices due to deterioration in animal body conditions.

Compounding this is the lack of institutional preparedness, weak food security policies, and unsustainable policy responses. Aid and other foreign assistance has been flowing in to fill the void created by these structural failures and policy gaps. However, aid cannot transform society because poverty is a structural problem, and relying on aid, which is a temporary measure, is not the solution.

Foreign aid, donor funding, and the attendant conditionalities have been the subject of debate for decades, with development practitioners, policy analysts, and economists coming out in strong support of foreign aid. While supporting market-based economic models in developing countries, they believed that what was needed was to pump money into developing and low-income economies to build roads, factories, and other essential infrastructure to trigger economic growth and development. The so-called official development assistance has evolved over the decades, with the aid model changing from relief food to cash transfers, food vouchers, and nutrition for assets/peace.

It might sound counterfactual, but foreign aid hurts the poor in developing economies more than it helps them. The conflicting narratives of support and development have been ignored or altogether shelved by analysts and practitioners; these two concepts have been presented oxymoronically. I believe that the “big push” theory for poverty alleviation leaves the developing economies worse off than before. My scepticism is primarily based on the fact that the effects of aid intervention are not evident at the level of the recipient households. The lives and livelihoods narrative that some specialists and donor communities peddle concerning the impact of aid development financing on families has made me exceedingly sceptical. In her book Dead Aid Dambisa Moyo shares similar sentiments, that aid has left African people much worse off, and in as much as her views may be vehemently put, her conclusions are supported by those of other development experts like William Easterly.

While donors are eager to showcase their best projects where positive change in the lives and livelihoods of the recipients is evident, the aid industry is less inclined to ask critical questions when a project fails to deliver the expected outcomes.

For the last two decades, foreign donors have pumped billions of dollars into Kenya’s ASALs with the stated aim of alleviating household poverty but with no visible results. What happened, and what is happening? There is no one single answer to this question, but what is clear is that donor funding changes the relationship between the people and their government.

The government taxes its citizens to fund the provision of public services and to pay public servants. The people ultimately hold the cord to the public purse and have “undeniable control”, which gives them the power to cut the government off if it fails to deliver. However, a country that has received a colossal amount of money from donors tends to have a weaker relationship and is less accountable to its people.

For the last two decades, foreign donors have pumped billions of dollars into Kenya’s ASALs with the stated aim of alleviating household poverty but with no visible results.

By supplementing government resources, donor funding has increased government leverage over its people. Peter Bauer, a critic of foreign aid, considers that support increases government control, and promotes the embezzlement of funds and the misallocation of resources. The United Nations and other aid bodies within the international community jump into Third World economies to fund development in countries with authoritarian regimes like Uganda, Rwanda, and Ethiopia, a clear indication that it is the economic and political interests of the funding/donor country that matter most and not the recipient population’s welfare.

Secondly, countries with abundant natural resources such as diamonds and oil tend to be more impoverished than those with fewer natural resources. Economists speak of a “natural resource curse” because the wealth strengthens authoritarian regimes and enables corrupt systems while the revenue streams from oil wealth and foreign aid ruin already non-transparent institutions while turning political institutions toxic. Examples of countries where foreign wealth has strengthened despotic regimes include Somalia, Nigeria, and Rwanda.

Thirdly, what works for whom is contingent on the geopolitical value—“war of terror” —and the market share. Compounding these are commercial, political, and ideological interests, and support to strategic allies rather than attending to the needs and welfare of the local community. This, in simple terms, is “aid for us, not them”. Much as development aid is camouflaged in the language of altruism, such assistance leads to the exploitation of developing nations.

Kenya, particularly northern Kenya, has been a beneficiary of this financing model. Kenya’s ASALs have been the focus of non-state actors trying to “bring development” to the local communities, from fighting disease outbreaks, to providing food, water, hygiene and sanitation, to poverty alleviation.

In the northern part of Kenya, 70 per cent of the local population lives in abject poverty. The vagaries of climate change, compounded by inter-communal conflict, insecurity, and recurrent drought, have posed a significant risk to the only source of income for the majority — pastoralism. This has created gaps in service provision by the government, prompting donors and development agencies to step in to fill the void.

The justification for development aid is the continued belief that poor regions are trapped in poverty due to lack of money. Following this logic, millions of dollars in donor funding have been pumped into Kenya’s vast arid and semi-arid regions over the last ten years. Infrastructure stamped with the donor’s logo or billboards indicating the source of funding dot the landscape, from educational facilities to health centres, dams and pit latrines. So, what does this tell us (or not) about the sustainability of aid? What are the implications of donors taking over of the provision of public services?

Most, if not all, development practitioners, policymakers, and consultants hold the belief that any significant development in Sub-Saharan Africa is the result of financing through foreign aid. These analysts and experts are, however, detached from the reality at the community level. While it is true that projects in sectors such as health have a lasting effect on the recipients’ lives, their arguments are primarily hinged on “what is seen rather than the value of what is seen”. Since aid comes with conditionalities regarding how it should be invested, the likelihood of it being invested in a project that is not considered a development priority by the end users is highly likely. Such projects quickly turn into “white elephants” once they are handed over to the target group or the local government since they often lack the administrative and technical framework that should be designed at the project’s inception stage in order to guarantee sustainability.

The justification for development aid is the continued belief that poor regions are trapped in poverty due to lack of money.

The vicious cycle of poverty in Africa often results from poor economic and political institutional arrangements that block opportunities for low-income households to create decent livelihoods for themselves. Continued assistance and donor funding for already weak and ill-prepared institutions merely represents a windfall for the holders of the public purse and encourages rent-seeking behaviour. This endless credit line leads to a soft and corrupt regime, supports the administration’s incompetence, and discourages the government from learning from policy missteps.

I do not argue that aid has zero impact on the lives of beneficiaries; indeed, its effect has been felt in the short-term in the health sector and during natural disasters. However, I can argue that aid in its current form cannot contribute to poverty alleviation at the household level. What can be done? It is time that Kenya breaks with its obsession with foreign aid and explores alternative means of providing opportunities for low-income families and marshalling resources for development.

Firstly, it is imperative to understand that no development can be exogenously driven unless the subjects take the lead. The partnership between the African government and the donor community is a “donor-centred” one where plans and programmes are drawn by consultants in foreign capitals to determine a change in the lives and livelihoods of the recipients living in the outback. To address the current lacklustre outcomes of development aid, the asymmetrical relationship between donor and recipient must be re-examined. The recipient must take the lead and drawing up the plans and programmes must be “recipient-active”.

This endless credit line leads to a soft and corrupt regime, supports the administration’s incompetence, and discourages the government from learning from policy missteps.

Secondly, the aid-financing model must re-evaluate its project design, in particular the backward mapping models where the recipients have to pilot the process with the technical help of development partners “free” from political interference. In as much it cannot be entirely free from local politics, project prioritising must be undertaken by the end-users. It serves no purpose to introduce the concept of hand-washing when the prospective beneficiary has nothing to offer his household for the next meal.

The international community, the Bretton Woods system, and the governments of developing countries have avoided developing a concept of self-development that would help Africans to become resilient and have not helped local communities to sustainably develop their agency to meet their own needs.

It is time for African governments to draft a new rulebook about what they want for future generations in the coming decades, what sustainable development implies, what resilience to changing climatic conditions means. It is time to move towards the path of a “non-aid” development financing model. African bureaucrats must realize that the success of Africa’s people is not in the hands of the consultants and development experts from downtown Manhattan; they themselves hold the key to the continent’s development. However, this does not imply that engagement with Western allies and partners in trade and other commercial arrangements should stop but, rather, a mutually beneficial partnership should be sought.  “It always looks impossible until it is fixed.”