The Children of Orma 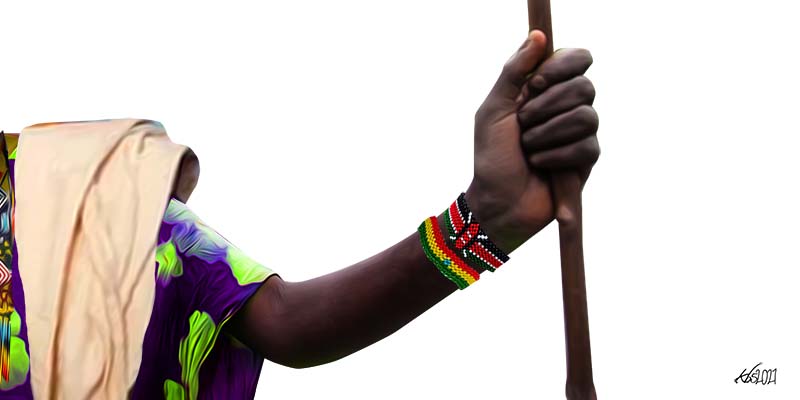 The Oromo are a Cushitic ethnic group and nation indigenous to Ethiopia and Kenya who trace their origins to a common ancestor. They call themselves ilmaan Orma, children of Orma. Historical explorations suggest that before they split into different regional groups in the 16th Century, the Oromo had a joint government and institutional framework. The standard system of governance functioned well in small-scale polities, but population growth and territorial expansion led to the fission of Oromo groups, which lived in federations and confederations in various independent but contiguous regions, sharing similar traditions, beliefs, and value systems from one founding father.

The Oromo are one of the most prominent ethnolinguistic groups in Ethiopia, accounting for 34.4 per cent of the country’s population of 112 million as of 2019. They are made up of many different clans, but are chiefly divided into two major groups. The Borana Oromo, who occupy the Borena zone of the Oromo region of Ethiopia and the former Northern Frontier District of Kenya (NFD – Isiolo, Garissa, Mandera, Marsabit, Moyale and Wajir). Within the larger Oromo, the Borana Oromo are believed to be the most influential group due to their unyielding adherence to the Gada social system.

The second moiety of the larger Oromo are the Barentu Oromo that inhabit the Oromia zones of Bale, Dirre Dawa, Jijiga, Afar, Amhara, Arsi zone, and West Hararghe. Although the sub-groups of the larger Oromo are distinct both socially and economically, and in terms of religious belief, they are united by a shared language, Afaan Oromoo or Oromiffa, which is widely spoken in the Oromia region of Ethiopia, in northern Kenya and in parts of Somalia.

Despite their diversity, their numbers and their occupation of large urban and pastoral zones, the Oromo people in Ethiopia have experienced a long history of marginalization, loss of land, and forced assimilation by the Ethiopian government. This ostracism has led to a decline in the pastoralist lifestyle of this larger group. The persecution of the Oromo also led to the rise of the Oromo Liberation Front (OLF) in the 1970s. What started out as a student union evolved into political movement whose main goal is Oromo self-determination, and which has gained traction with the Oromo diaspora and its intellectual leadership.

In the spring of 1991, the Ethiopian People’s Revolutionary Democratic Front (EPRDF), the then ruling party, extended control over the Oromo region, provoking a negative reaction from the OLF, which feared occupation of Oromo land. Continued coercion and persecution provoked OLF members and supporters to take up arms against the ruling party in 1992. Although the insurgency was swiftly contained, the OLF has only grown stronger. In January 2004, the Ethiopian security forces arrested 349 Oromo students for demonstrating to demand their right to freedom of cultural expression. The repression in Oromia has been harsh, with the arbitrary detention of protestors in the occupied regions. The Ethiopian Human Rights Council has reported of arrested students being forced to trek over gravel barefooted or on their knees.

Ethiopia’s global diaspora is estimated to stand at two million with a large base in the United States. Most Ethiopians are pushed to leave the country in search of political asylum and greener pastures. As Hassan Hussein, an Ethiopian academic based in the US has said, in the absence of an independent media, lack of freedom of expression, and peaceful political struggle inside Ethiopia, the Oromo in the diaspora have stepped in to occupy the space. Feyosa Lelisa, an exiled Ethiopian marathoner who participated in the 2016 Rio Olympics, crossed his wrists above his head in a show of solidarity with those who have been suffering under Ethiopia’s brutal regime.

Jawar Mohammed, a leading Ethiopian opposition figure who had been living in exile in the US, established the Oromo Media Network (OMN) to highlight the issues of the greater Oromia region. Mohamed returned from exile in 2018 when Abiy Ahmed—who was perceived as a reformist—came to power. He has since become a fierce critic of the current regime. The media mogul was jailed together with 22 others following the cold-blooded murder of Haacaaluu Hundeessaa, who was known for relaying his criticisms and calls for Oromo liberation through his songs. Hundeessaa’s killing in Addis Ababa in June 2020 sparked protests across the Oromia region, which resulted in the killing of more than 150 people by security forces.

In the absence of an independent media, lack of freedom of expression, and peaceful political struggle inside Ethiopia, the Oromo in the diaspora have stepped in to occupy the space.

The Borana Oromo of Kenya have also not escaped the repression. Established in Marsabit, Moyale and Isiolo, the community has faced the brutal subjugation of both the Kenyan and Ethiopian governments.

The unification of the Borana Oromo of northern Kenya as entity dates back to the period of the political independence of Kenya and the gaf dabba, the Shifta war of the 1960s. As Kenya prepared for self–governance, the minority populations of the NFD were calling for self-determination under a Greater Somalia. The region exploded in rebellion when these demands were not met. The Borana community refused to engage in the Shifta war against the independent Kenyan state as it feared that the creation of a Greater Somalia would lead to the loss of political and territorial rights. Moreover, many Borana in Kenya considered Southern Ethiopia, and not Somalia, their ancestral land.

The killing of Jatani Ali

Jatani Ali was a prominent leader held in high regard by the different Oromo subgroups, and particularly the Kenyan Borana. Jatani was born in 1939 in Melbana Location of Dirre District, in Borana Zone. He was educated in Ethiopia and rose to become the governor of the Borana Zone of Southern Ethiopia. Jatani’s support for Oromo liberation was unequivocal. He was often heard to say “Lafti tessan lafe tessan, laf tessan jabefadha,” literally, “The land belongs to you, and the bone is yours, take care of your land.” Jatani urged the Oromo to take their children to school and to diversify their economic activities beyond livestock keeping.

Like other Arid and Semi-Arid Lands (ASALs), the Borana zone has been facing a myriad challenges including loss of livestock to prolonged drought, pests, and diseases. To address these recurrent problems, Jatani initiated the SORDU project whose components included road construction to improve accessibility to livestock markets and the provision of veterinary services for livestock waiting to be sold. To cover this cost, the livestock owner would retain 70 per cent of the profits with the remaining 30 per cent being injected back into the SORDU project.

Like other Arid and Semi-Arid Lands, the Borana zone has been facing a myriad challenges including loss of livestock to prolonged drought, pests, and diseases.

Many in Ethiopia and northern Kenya emulated Jatani’s exemplary leadership. Before the rise of the Tigray People’s Liberation Front (TPLF), Ethiopia was ruled by the Derg, a Marxist-Leninist military junta. Jatani was on the TPLF’s most-wanted list, which drove him into self-exile in Kenya where he was assassinated by TPLF operatives in the Eastleigh neighbourhood of Nairobi in July 1992. School-going children in Marsabit were sent homes following his murder, a sign of the respect with which Jatani was held. Jatani was buried near the Marsabit War Cemetery even though his home is in Ethiopia.