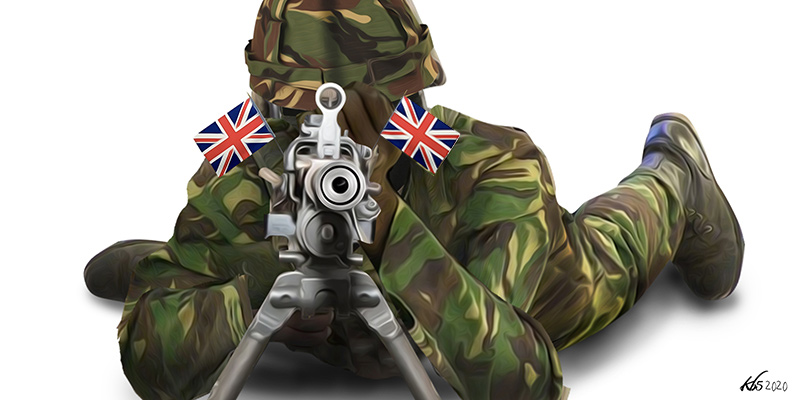 The British government wants to evade compensating for the environmental impact of the bush fires by claiming “sovereign immunity” for its military exercises in the former UK colony. If it succeeds, not only will the UK not provide compensation, it will also continue ignoring the trauma, restlessness, health issues and displacement caused to local communities.

The revelation comes days before the Ministry of Defence (MOD) is due in court to defend itself against a compensation claim being brought by 1,400 Kenyans. They blame British troops for accidentally burning down 12,000 acres (nearly 50 square kilometres) of land in central Kenya earlier this year.

Declassified understands that UK government lawyers are urgently trying to stop a Kenyan judge from hearing a class action suit on Monday at Nanyuki High Court, 150km north of Nairobi.

The lawyers are expected to argue that the British military has “sovereign immunity” for their actions in the former UK colony.

One man, Linus Murangiri, was crushed to death by a vehicle as local people rushed to help put out the fire in Lolldaiga Conservancy on 23 March. The fire burnt for at least four days in a prized wildlife reserve on the foothills of Mount Kenya – a tourist destination popular with the royal family.

A British soldier in Kenya posted on Snapchat during the incident: “Caused a fire, killed an elephant and feel terrible about it but hey-ho, when in Rome.” Eyewitnesses said it smelt “like a barbecue”. The Kenya Wildlife Service claims no elephants, which are known to roam in the area, died.

Speaking on Kenyan TV during the fire, UK High Commissioner in Nairobi Jane Marriott said: “Accidents do happen. It’s not great and we’re really sorry and we really wish it hadn’t happened…We’re doing everything we can to mitigate those circumstances and put in place measures to ensure it never happens again.”

When asked by a journalist if there had been another fire three weeks earlier, Marriott said: “I haven’t seen any confirmed reports of another fire, but you know fires do happen. It’s very volatile conditions up there with the high winds – tinder box, combustible grass at the moment and the rains are late.”

Although Marriott claims she was unaware of an earlier fire, Declassified has found that in the four weeks leading up to the Lolldaiga disaster British soldiers sparked five other blazes while training on grassland near Mount Kenya.

A freedom of information response from the MOD reveals:

None of these fires were investigated. The army also admitted to causing another two fires in Kenya in 2019, but when asked for further details said “no documents are held” as they “did not meet the threshold for investigation.”

The MOD’s Defence Infrastructure Organisation said it was “only required to investigate significant fires when a loss of equipment, injury or significant environmental damage has occurred.”

Regarding the largest fire on 23 March, the MOD press office told Declassified: “The British Army has conducted an internal investigation into the fire on Lolldaiga Conservancy. As this is part of an ongoing court case, it would be inappropriate to comment any further.”

The British army has access to 155,000 hectares of land across nine sites in Kenya for training exercises. Many of the sites are in Laikipia county, a district that was known as the White Highlands during colonial times because European settlers occupied so much of its land.

Britain granted independence in 1963 after brutally suppressing an uprising by the Kenya Land and Freedom Army – also known as the Mau Mau.

The African Centre for Corrective and Preventive Action (ACCPA), a campaign group which is part of the lawsuit, told Declassified it believed the British government would try to use the “state immunity” argument “to silence us” in Laikipia’s environmental court on Monday.

James Mwangi, the ACCPA’s chairman, said in a statement:

“While the recent fire at Lolldaiga has raised so much concern in both countries, it certainly hasn’t been the only fire caused by British soldiers in the course of their training at the Lolldaiga Conservancy. A few years back in 2017 and 2015 there were similar fires that spread to homesteads, destroying property and harboring health issues to the nearby residents.

“Often, we are mobilized to give much needed aid to put out the fire, sustaining injuries in the process as was the case with Linus Murangiri who died in the fire, and once the fire is out no other concern is raised to the community. Reports arising from the investigations were never disclosed to the immediate community, nor measures put in place to curb future occurrences.

“This explains why the British army was not in a position to stop the current fires which lasted for over a week. Unsurprisingly, and like in other incidents, the military resumed training not much bothered with the trauma, restlessness, health issues and displacement the fire had caused to my community.”

The British army has regularly held military exercises in Kenya to prepare troops for tours of Iraq and Afghanistan.

Mwangi told Declassified: “Growing up at Lolldaiga is incomparable to any other experiences in most parts of Kenya. British soldiers in full military gear aboard long military convoys, tanks and armored carriers often colour the dusty roads leading to Lolldaiga Conservancy. The following weeks would be followed with heavy bombardments, low flying crafts, explosions and smoke only comparable to real battlefield events.”

Mwangi said that during the training, “shock and sleepless nights would be the norm and the wild animals, as if in retaliation or defence from the invasion of their habitat, intrude the communities killing people and destroying crops”.

“After a couple of weeks”, he added, “the officers vacate, leaving a trail of scorched environment, military waste, undetonated grenades, and burnt vegetation.”

Mwangi claimed unexploded ordnance has caused injuries to children and the elderly. In 2015, 10-year-old Ekisonga Nyasasai was hospitalised after stepping on an explosive near Archers Post, which Kenyan MPs claimed had been left behind by British troops.

The MOD says it clears land after exercises, although it has previously paid millions in compensation to hundreds of Kenyans bereaved or maimed by abandoned UK explosives.

The ACCPA chairman also claims that British military exercises pollute the local water supply. “Years of unsustainable environmental use have turned the live nourishing waters from Lolldaiga Hills into waters of death and misery,” he said.

“Rampant cases of miscarriages, unprecedented bolivine blindness in cattle and blurred vision among the majority of the population indicate presence of pollutants and chemicals in the soil and water.” A local preacher and his one-year-old child were hospitalised for smoke inhalation during the most recent fire at Lolldaiga, according to a BBC report.

Mwangi believes UK forces have not taken enough steps to protect the environment. “British military training at Lolldaiga has been ongoing for about four decades now,” he said. “No environmental assessment test has been made for all these years, to ascertain the sustainability of the training activities in a water catchment area adjacent to a community of about 2,000 households and an approximate population of about 10,000 people including children.”

The litigation over the Lolldiaga fire comes at a time when the UK is seeking to consolidate its military presence in East Africa. This January, Britain’s defence secretary Ben Wallace opened a newly refurbished headquarters for the British army in Kenya, which cost £70 million.

Then in July, Wallace signed a new five-year defence co-operation agreement with Kenya, due to be ratified by both country’s parliaments. Under the previous agreement, Britain paid a very small sum, around £175,000 a year, to lease space at certain Kenyan military facilities.  Since the fire at Lolldaiga, the British army claims to have distributed 100,000 seedlings to the conservancy.

Declassified has previously revealed concerns about the environmental impact of British military bases in Cyprus, Belize and Oman.

The British High Commissioner to Kenya was asked to comment.