Capitalism Is Killing the Planet, We Need A New Economic Model 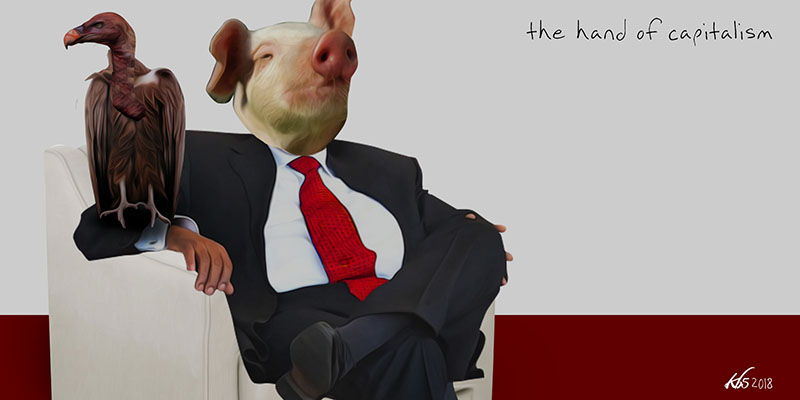 Earlier this year, an unfinished draft of the upcoming IPCC report on climate change was leaked to the press by scientists concerned that its conclusions would be watered down by political pressures. A recently revealed document with 32,000 submissions from governments has confirmed their fears. As COP26 begins, we look back on this leak to remind ourselves of our choice: end capitalism, or face extinction.

A leaked draft of the third part of the upcoming IPCC report establishes that we must move away from the current capitalist model to avoid exceeding planetary limits. It also confirms that, as stated in the article published by CTXT on August 7, “Greenhouse gas (GHG) emissions must peak in at most four years”. The document also acknowledges that there is little chance of further economic growth.

The signatories of this article, scientists and journalists, have analysed a new part of the Sixth Report, leaked by the scientists’ collective Scientist Rebellion and Extinction Rebellion Spain. The leak clearly shows the vast discrepancies between the scientific community’s understanding of what is needed to achieve an effective and just transition, and the reality of how little has been achieved. Fortunately, among the usual more timid positions, demands that would have been unthinkable not so long ago are beginning to emerge.

Before getting into the analysis, a bit of context is needed. In 1990, the IPCC’s First Assessment Report still stated that “the observed increase [in temperature] may be largely due to natural variability”. This debate was closed in subsequent reports. However, in case there was still any doubt, the analysis of Group I of the Sixth Report – now official – has eliminated any uncertainty. It removes any possibility of retorts from climate denialists, who have long been amply showered with money by those who had the most to lose — the fossil fuel lobbies. The first question to solve a mystery is usually the classic Cui Bono (Who benefits?).

The underlying question now is, how do we ensure that the necessary transition is perceived as a benefit and not as a difficulty? The leaked report confirms that there is no other possibility than giving up indefinite growth. The transition has to take into account the cultural and historical differences in emissions between countries, and the differences between the rural and urban world, so as not to benefit one over the other, and above all the tremendous and growing economic inequalities between the increasingly poor and the increasingly obscenely rich. Either these three dichotomies are addressed, or the transition will have more enemies than supporters and will sabotage itself. The draft reads: “Lessons from experimental economics show that people may not accept measures that are perceived as unfair even if the cost of not accepting them is higher”.

Even if we manage to change course, the scientists warn that “Transitions are not usually smooth and gradual. They can be sudden and disruptive”. They also point out that “the pace of transition can be hindered by the blockage exerted by existing capital, institutions and social norms”, emphasising the importance of inertias. They add, “The centrality of fossil energy in economic development over the past two hundred years raises obvious questions about the possibility of decarbonisation.”

Policies favourable to fossil fuel companies have extracted our common wealth – our air, forests, land… – and put it in the hands of a small minority. Green policies are therefore bound to be redistributive at a time when inequality is soaring. One of the measures proposed to reduce the regressivity of carbon prices is redistributing tax revenues in favour of low and middle income earners. But, as anthropologist Jason Hickel reminds us, “Anything short of a binding cap on fossil fuel extraction, with declining annual targets that will wind down the industry to zero, is just hand-waving.”

This brings us to one of the report’s defining paragraphs, “Some scientists stress that climate change is caused by industrial development, and more specifically, by the nature of social and economic development produced by the nature of capitalist society, which they therefore consider ultimately unsustainable”. Although many have said it before, we don’t think we have ever read anything quite so clarifying in the world’s leading climate report, which adds, “Current emissions are incompatible with the Paris Agreement and immediate and deep cuts are absolutely mandatory.

These targets, which imply a drastic decrease in emissions and therefore also in energy production and material use in the short term, are impossible to achieve with the current model. In addition, Group III links reducing emissions to the fulfilment of the 17 Sustainable Development Goals to be achieved by 2030, as agreed upon by the member states of the United Nations in 2015. Despite the existing contradictions within the 17 SDGs, they include inarguable objectives such as the reduction of inequality and the protection of biodiversity, alongside the more controversial one, within the report itself, of promoting sustainable economic growth.

It is customary practice not to hide scientific debate at the IPCC. In 1990, it still revolved around the causes of climate change, but after 30 fruitless years we now see that the discussion is between positions that still believe we can continue to grow and reduce emissions at the necessary rate, and those who see this as another type of denialism. A more subtle form of it, but one which in the end benefits and is defended by the same people who once questioned the origin of global warming.

The IPCC report accepts that “mitigation and development goals cannot be achieved through incremental changes”. Stubbornly focusing on growth requires massive development of technologies that can reduce greenhouse gas concentrations in the atmosphere, but these CCS (Carbon Capture and Sequestration) technologies are not materialising as predicted.

Ecosystem carbon sinks are in clear decline and climate feedbacks are being triggered which, as is now widely acknowledged, is pushing the Earth past several points of no return and hence into a warmer and more unstable state. The only known way to avoid climate collapse is to move away from the perpetual growth model.

The report highlights that the “organised hypocrisy” identified in international cooperation, where agreements and claims are not matched by actions, is one of the most important barriers to mitigation.

The IPCC is also calling on us not to forget the unimplemented lessons of covid-19. Lessons that should serve to avoid making the same mistakes with climate change, as the analogies are clear and direct. The costs of prevention and preparatory actions are minimal compared to the costs of the impacts caused. Delaying action will lead to increasing costs that will be very difficult to bear.

If action is not taken soon, challenges will increase exponentially, and with unforeseen consequences.

It is clear that there needs to be a perception that a large majority of us ‘benefit’, or there will be no solution. This is why it is crucial the enormity and scale of the problem are explained for the measures to be understood and certain sacrifices to be seen as benefits. The alternative is to change climate stability forever and aggravate conflicts over resources.

Competition helped species evolve, but, as the brilliant microbiologist Lynn Margulis has shown, it is cooperation that is the key to evolutionary leaps. We now face a precipice drawn by the intersection of the ecological and energy crises. We can have good lives with less energy available (and at the same time, we will have lower workloads), but capitalism will not be able to sustain itself with less energy without completing its mutation into a kind of techno-feudalism. Only if we cooperate, if we understand that we share so much, including an atmosphere that doesn’t know what borders are, can we react and leap far enough to avoid the fall.

This article was first published by Progressive international.