Dadaab: Playing Politics With the Lives of Somali Refugees in Kenya 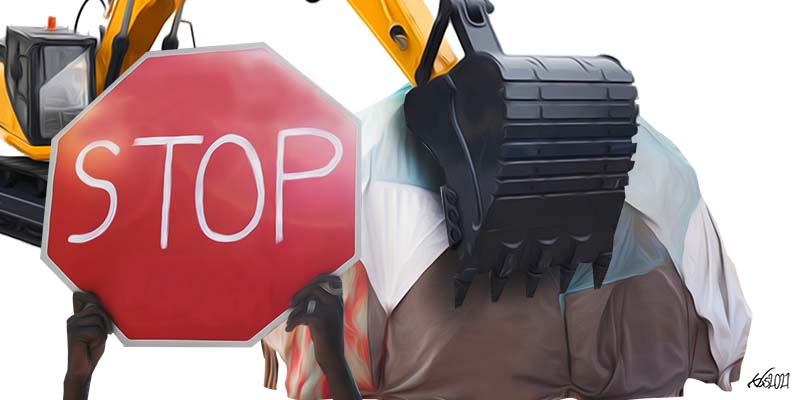 For several years now, Kenya has been demanding that the UNHCR, the UN Refugee Agency, close the expansive Dadaab refugee complex in north-eastern Kenya, citing “national security threats”. Kenya has argued, without providing sufficient proof, that Dadaab, currently home to a population of 218,000 registered refugees who are mostly from Somalia, provides a “safe haven” and a recruitment ground for al-Shabaab, the al-Qaeda affiliate in Somalia that constantly carries out attacks inside Kenya. Threats to shut down have escalated each time the group has carried out attacks inside Kenya, such as following the Westgate Mall attack in 2013 and the Garissa University attack in 2015.

However, unlike previous calls, the latest call to close Dadaab that came in March 2021, was not triggered by any major security lapse but, rather, was politically motivated. It came at a time of strained relations between Kenya and Somalia. Kakuma refugee camp in Turkana County in north-western Kenya, is mostly home to South Sudanese refugees but also hosts a significant number of Somali refugees. Kakuma has not been included in previous calls for closure but now finds itself targeted for political expediency—to show that the process of closing the camps is above board and targets all refugees in Kenya and not only those from Somalia.

That the call is politically motivated can be deduced from the agreement reached between the UNHCR and the Kenyan government last April where alternative arrangements are foreseen that will enable refugees from the East African Community (EAC) to stay. This means that the South Sudanese will be able to remain while the Somali must leave.

Accusing refugees of being a security threat and Dadaab the operational base from which the al-Shabaab launches its attacks inside Kenya is not based on any evidence. Or if there is any concrete evidence, the Kenyan government has not provided it.

Some observers accuse Kenyan leaders of scapegoating refugees even though it is the Kenyan government that has failed to come up with an effective and workable national security system. The government has also over the years failed to win over and build trust with its Muslim communities. Its counterterrorism campaign has been abusive, indiscriminately targeting and persecuting the Muslim population. Al-Shabab has used the anti-Muslim sentiment to whip up support inside Kenya.

Moreover, if indeed Dadaab is the problem, it is Kenya as the host nation, and not the UNHCR, that oversees security in the three camps that make up the Dadaab complex. The camps fall fully under the jurisdiction and laws of Kenya and, therefore, if the camps are insecure, it is because the Kenyan security apparatus has failed in its mission to securitise them.

The terrorist threat that Kenya faces is not a refugee problem — it is homegrown. Attacks inside Kenya have been carried out by Kenyan nationals, who make up the largest foreign group among al-Shabaab fighters. The Mpeketoni attacks of 2014 in Lamu County and the Dusit D2 attack of 2019 are a testament to the involvement of Kenyan nationals. In the Mpeketoni massacre, al-Shabaab exploited local politics and grievances to deploy both Somali and Kenyan fighters, the latter being recruited primarily from coastal communities. The terrorist cell that conducted the assault on Dusit D2 comprised Kenyan nationals recruited from across Kenya.

Jubaland and the maritime border dispute

This latest demand by the Kenyan government to close Dadaab by June 2022 is politically motivated. Strained relations between Kenya and Somalia over the years have significantly deteriorated in the past year.

Mogadishu cut diplomatic ties with Nairobi in December 2020, accusing Kenya of interfering in Somalia’s internal affairs. The contention is over Kenya’s unwavering support for the Federal Member State of Jubaland — one of Somalia’s five semi-autonomous states — and its leader Ahmed “Madobe” Mohamed Islam. The Jubaland leadership is at loggerheads with the centre in Mogadishu, in particular over the control of the Gedo region of Somalia.

Kenya has supported Jubaland in this dispute, allegedly hosting Jubaland militias inside its territory in Mandera County that which have been carrying out attacks on federal government of Somalia troop positions in the Gedo town of Beled Hawa on the Kenya-Somalia border. Dozens of people including many civilians have been killed in clashes between Jubaland-backed forces and the federal government troops.

Relations between the two countries have been worsened by the bitter maritime boundary dispute that has played out at the International Court of Justice (ICJ).

The latest call to close Dadaab is believed to have been largely triggered by the case at the Hague-based court, whose judgement was delivered on 12 October.  The court ruled largely in favour of Somalia, awarding it most of the disputed territory. In a statement, Kenya’s President Uhuru Kenyatta said, “At the outset, Kenya wishes to indicate that it rejects in totality and does not recognize the findings in the decision.” The dispute stems from a disagreement over the trajectory to be taken in the delimitation of the two countries’ maritime border in the Indian Ocean. Somalia filed the case at the Hague in 2014.  However, Kenya has from the beginning preferred and actively pushed for the matter to be settled out of court, either through bilateral negotiations with Somalia or through third-party mediation such as the African Union.

Kenya views Somalia as an ungrateful neighbour given all the support it has received in the many years the country has been in turmoil. Kenya has hosted hundreds of thousands of Somali refugees for three decades, played a leading role in numerous efforts to bring peace in Somalia by hosting peace talks to reconcile Somalis, and the Kenyan military, as part of the African Union Mission in Somalia, AMISOM, has sacrificed a lot and helped liberate towns and cities. Kenya feels all these efforts have not been appreciated by Somalia, which in the spirit of good neighbourliness should have given negotiation more time instead of going to court. In March, on the day of the hearing, when both sides were due to present their arguments, Kenya boycotted the court proceedings at the 11th hour. The court ruled that in determining the case, it would use prior submissions and written evidence provided by Kenya. Thus, the Kenyan government’s latest demand to close Dadaab is seen as retaliation against Somalia for insisting on pursuing the case at the International Court of Justice (ICJ).

Nowhere safe to return to

Closing Dadaab by June 2022 as Kenya has insisted to the UNHCR, is not practical and will not allow the dignified return of refugees. Three decades after the total collapse of the state in Somalia, conditions have not changed much, war is still raging, the country is still in turmoil and many parts of Somalia are still unsafe. Much of the south of the country, where most of the refugees in Dadaab come from, remains chronically insecure and is largely under the control of al-Shabaab. Furthermore, the risk of some of the returning youth being recruited into al-Shabaab is real.

A programme of assisted voluntary repatriation has been underway in Dadaab since 2014, after the governments of Kenya and Somalia signed a tripartite agreement together with the UNHCR in 2013. By June 2021, around 85,000 refugees had returned to Somalia under the programme, mainly to major cities in southern Somalia such as Kismayo, Mogadishu and Baidoa. However, the programme has turned out to be complicated; human rights groups have termed it as far from voluntary, saying that return is fuelled by fear and misinformation.

Many refugees living in Dadaab who were interviewed by Human Rights Watch said that they had agreed to return because they feared Kenya would force them out if they stayed. Most of those who were repatriated returned in 2016 at a time when pressure from the Kenyan government was at its highest, with uncertainty surrounding the future of Dadaab after Kenya disbanded its Department of Refugee Affairs (DRA) and halted the registration of new refugees.

Many of the repatriated ended up in camps for internally displaced persons (IDPs) within Somalia, with access to fewer resources and a more dangerous security situation. Somalia has a large population of 2.9 million IDPs  scattered across hundreds of camps in major towns and cities who have been displaced by conflict, violence and natural disasters. The IDPs are not well catered for. They live in precarious conditions, crowded in slums in temporary or sub-standard housing with very limited or no access to basic services such as education, basic healthcare, clean water and sanitation. Thousands of those who were assisted to return through the voluntary repatriation programme have since returned to Dadaab after they found conditions in Somalia unbearable. They have ended up undocumented in Dadaab after losing their refugee status in Kenya.

Many refugees living in Dadaab who were interviewed by Human Rights Watch said that they had agreed to return because they feared Kenya would force them out if they stayed.

Camps cannot be a permanent settlement for refugees. Dadaab was opened 30 years ago as a temporary solution for those fleeing the war in Somalia. Unfortunately, the situation in Somalia is not changing. It is time the Kenyan government, in partnership with members of the international community, finds a sustainable, long-term solution for Somali refugees in Kenya, including considering pathways towards integrating the refugees into Kenyan society.  Dadaab could then be shut down and the refugees would be able to lead dignified lives, to work and to enjoy freedom of movement unlike today where their lives are in limbo, living in prison-like conditions inside the camps.

The proposal to allow refugees from the East African Community to remain after the closure of the camps — which will mainly affect the 130,000 South Sudanese refugees in Kakuma —  is a good gesture and a major opportunity for refugees to become self-reliant and contribute to the local economy.

Announcing the scheme, Kenya said that refugees from the EAC who are willing to stay on would be issued with work permits for free. Unfortunately, this option was not made available to refugees from Somalia even though close to 60 per cent of the residents of Dadaab are under the age of 18, have lived in Kenya their entire lives and have little connection with a country their parents escaped from three decades ago.

Many in Dadaab are also third generation refugees, the grandchildren of the first wave of refugees. Many have also integrated fully into Kenyan society, intermarried, learnt to speak fluent Swahili and identify more with Kenya than with their country of origin.

The numbers that need to be integrated are not huge. There are around 269,000 Somali refugees in Dadaab and Kakuma. When you subtract the estimated 40,000 Kenyan nationals included in refugee data, the figure comes down to around 230,000 people. This is not a large population that would alter Kenya’s demography in any signific ant way, if indeed this isis the fear in some quarters. If politics were to be left out of the question, integration would be a viable option.

Many in Dadaab are also third generation refugees, the grandchildren of the first wave of refugees.

For decades, Kenya has shown immense generosity by hosting hundreds of thousands of refugees, and it is important that the country continues to show this solidarity. Whatever the circumstances and the diplomatic difficulties with its neighbour Somalia, Kenya should respect its legal obligations under international law to provide protection to those seeking sanctuary inside its borders. Refugees should only return to their country when the conditions are conducive, and Somalia is ready to receive them. To forcibly truck people to the border, as Kenya has threatened in the past, is not a solution. If the process of returning refugees to Somalia is not well thought out, a hasty decision will have devastating consequences for their security and well-being.