Patriarchy and Negotiated Democracy Knock Wajir Women off the Ballot 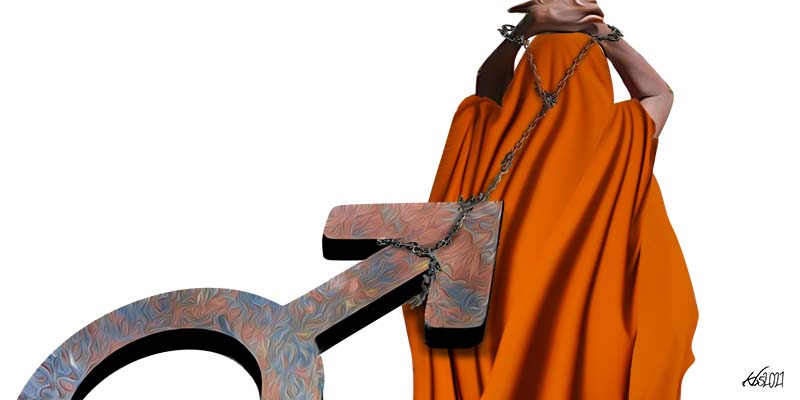 Equality in leadership will remain elusive in northern Kenya as long as powerful sultans continue to promote negotiated democracy as the preferred method of electing political leaders. Negotiated democracy is unconstitutional and does not respect the two-thirds gender rule that promotes equality in decision-making. It is a power-sharing agreement where political positions are distributed ahead of the elections, allegedly to prevent election-related conflicts. (Although, as Dalle Abraham observes, negotiated democracy “does not bring about the expected harmony.”)

There is a Somali proverb that says, “Women have no tribe” from which derives the unspoken rule that women cannot represent their clans and tribes in Wajir County politics. Among the 30 elected Members of the County Assembly and the six Members of Parliament, with the exception of the Women Representative, none is a woman.

The process of negotiation includes all the clans in Wajir but leaves out women, who are not part of the council of sultans. The main Somali clans residing in Wajir are the Ogaden, the Ajuran and the Dagodia. To illustrate, the Dagodia clan, the largest of the clans in Wajir, has a council of sultans who are drawn from the ten Dagodia sub-clans. Each of the sub-clans has its own sultan who is (s)elected by consensus by the clan elders. (The Wabar is the leader and unifying factor of the Dagodia community that also occupies parts of Ethiopia and Somalia. The incumbent, Wabar Abdille Abdi, visited Kenya from his home in Ethiopia in November 2019. This was Wabar Abdille’s first visit to Kenya where he was awarded the highest head of state commendation, the Chief of the Order of the Burning Spear (O.B.S.), by President Uhuru Kenyatta “for his role in ensuring cross-border peace and unity in the region.”)

As we approach the 2022 elections, every clan in Wajir has already chosen its sultan who will be responsible for the selection of suitable political contestants from within the clan to represent it at the ballot to compete against the representatives of the other clans. The Fai clan council of Ugas (sub-clan leaders) recently released a statement on Facebook that they will soon kickstart a series of activities to identify suitable political leaders from among their sub-clans to run in the 2022 elections.

Equality in leadership will remain elusive in northern Kenya as long as powerful sultans continue to promote negotiated democracy as the preferred method of electing political leaders.

Every aspirant must write an application letter to the clan sultan and pay KSh50,000 if vying for the position of Member of the County Assembly. The non-refundable amount rises to KShs200,000 for a parliamentary seat and to KShs1 million for the governorship. In 2017, six women aspirants interested in MCA seats (including Hon. Fatuma Ibrahim, currently a member of the East African Legislative Assembly) tried to go through the process by applying and paying the required amount but they were all turned down and advised to run for the position of Women Representative instead.

One such aspirant is Ms. Fatuma Sheikh Abass who had served two terms as a nominated Member of the County Assembly under the NARC-Kenya umbrella before attempting to vie for the MCA seat in Elben Ward, Wajir East, in 2017. Abbas went through the selection process but was rejected by the council of sultans which decided to hand-pick a male aspirant based on the belief that a clan cannot be represented by a woman at the County Assembly. But Ms. Abass remains undeterred and will be standing again in the same ward in the 2022 elections with the support of the members of the Wajir Women Council that was created in 2021 by Ms. Rukia Abdullahi Barrow, chairperson of the Wajir branch of Maendeleo Ya Wanawake. The Women Council has representatives from the eight sub-counties and strongly supports the participation of women in elective leadership.

The council is encouraging women aspirants not to be intimidated by the curses pronounced against them by their clan sultans in a bid to force them to step aside in favour of male aspirants. The council is also creating awareness among women at the grassroots level to encourage them to support fellow women who wish to run for elective leadership. But the newly created council has no resources, and it has yet to draw up a resource mobilisation strategy.

A meeting bringing together women aspirants from across Wajir was convened in mid-September 2021 by Women Inclusive Network (WIN), a local community-based organization that supports women’s participation in elective leadership. The objective of the meeting was to engage clan elders on the question of support for women aspirants. Saying that he supported women in leadership, one of the elders, Abdi Kule Hassan, a member of the Fai sub-clan Ugas, explained that his own wife, Asha Abdi Dere had been an MCA aspirant for Wagberi ward in the 2013 elections. He said, “Even though she was not selected in the process, I decided to encourage her to go up to the ballot and she got 240 votes out of 5,886 votes. Only forty women voted for her and majority of her voters were men. I have accepted now that its women who don’t support each other.”

The council is encouraging women aspirants not to be intimidated by the curses pronounced against them by their clan sultans in a bid to force them to step aside in favour of male aspirants.

Another point of concern that was raised by one of the elders is that among the women nominated to the county assembly, a number were allegedly divorced due to work-family conflicts, where the workload and work-related travel left little time for family responsibilities.

Of the registered voters in Wajir County, 46 per cent, or almost half, are women but they are under-represented in decision-making at the county level and in the national assembly. This is because they tend to be exploited as voting machines whose role is limited to casting their vote for the candidate endorsed by the powerful sultans. Decisions are made on their behalf by the clan sultans, the council of elders and by their partners, and they are even transported to cast votes for preferred candidates in other polling stations. It has been noted that divorce rates go up during the election period because of women not being allowed to decide for themselves who to vote for or where to vote.

Ms. Ubah Abdikarim, a former nominated MCA for Township Ward, spoke about the level of illiteracy among women in the county and the lack of awareness that gender equality is a human right that is key to development. Ms. Abdikarim said, “As a woman leader, I fight for gender inclusiveness and equality in the county’s elected leadership and in resource sharing. I will encourage women aspirants to continue seeking elective political posts in the wards and to be part of the decision making regardless of the barriers.”

According to Kenya National Bureau of Statistics reports, at 76 per cent, Wajir County has the second highest illiteracy rate in the country after Turkana County where the rate is 82 per cent. Only 22 per cent of women have received any education and because of this, women are assisted voters during elections, enjoying no privacy at the ballot. Their illiteracy places them in a situation where they are forced to loudly state their preferred candidate in the presence of the candidates’ agents and IEBC (Independent Electoral and Boundaries Commission) officials. There is a lot fear and intimidation since the ballot is not secret. Most times clan representatives act as watchdogs, observing the women through the windows of the polling stations in order to report back if they vote contrary to the decisions of the sultans.

But the educated women of northern Kenya are increasingly questioning why they are being side-lined by an oppressive culture and open bias that denies them their constitutional right to vie for political leadership to serve their communities. They question the motives behind the sultans’ preference for male aspirants. For the sultans, however educated, strong and vocal a woman is, she is still regarded as a “weak” leader who cannot deliver to their expectations. A less educated male candidate is still preferable in their eyes.

Moreover, allegations that the wife of the impeached former governor of Wajir usurped and misused the powers of the office have not helped the case for women. The accusations have been used to promote the view that women politicians would be no better than corrupt male politicians.

Only 22 per cent of women have received any education and because of this, women are assisted voters during elections, enjoying no privacy at the ballot.

Politics is all about financial stability, but women aspirants are not as financially powerful as their male counterparts. During the electoral period money is essential for logistics and the production of campaign materials but most women aspirants have low visibility because of lack of funds.

The system of negotiated democracy has been normalized and fully accepted by the northern counties, and particularly by the communities in Wajir County. Negotiated democracy has killed the hope of true democracy in northern Kenya. It is an unconstitutional process that does not consider the voters’ interests but benefits the few powerful sultans who select loyalist candidates in return for lucrative contracts for their companies and businesses.

It is the hope of every woman aspirant in northern Kenya that the day will come when women will receive the same support from their councils of elders as their male counterparts. For now, women leaders have no choice but to unite all women at the grassroots to support women leadership. As we head into the 2022 elections, most women aspirants are inspired to change the narrative and to win against the negative and oppressive cultural belief that women cannot lead their communities.