Omissions of Inquiry: Kenya and the Limitations of Truth Commissions 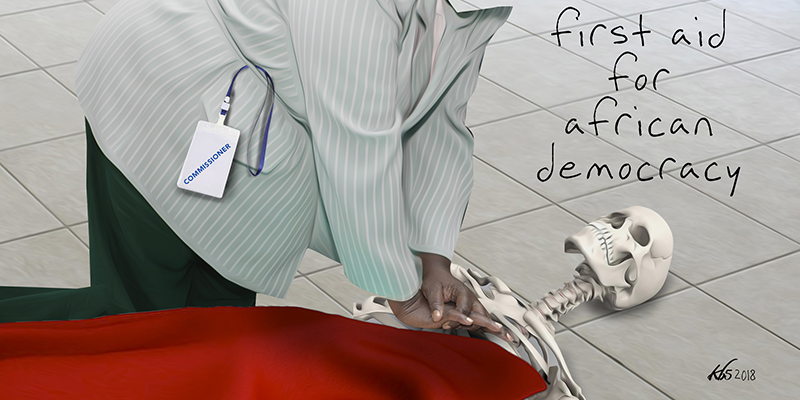 In today’s world, it is almost expected that a truth commission will be introduced in the wake of conflict or a period of authoritarianism to try and consolidate a transition to democracy and peace. A truth commission generally understood – as per Priscilla Hayner – as a temporary state-sanctioned body that investigates a pattern of past abuse, engages ‘directly and broadly with the affected population, gathering information on their experiences’ and which aims to conclude with a public report.

The underlying idea is that societies need to confront and deal with unjust histories if they are to establish a qualitative break with that past. Proponents of modern truth commissions thus ‘look backwards’, not as interested historians, but as a way to ‘reach forwards.’ As Archbishop Desmond Tutu explained in his foreword to the South African Truth and Reconciliation Commission (TRC) report:

The other reason amnesia simply will not do is that the past refuses to lie down quietly. It has an uncanny habit of returning to haunt one … However painful the experience, the wounds of the past must not be allowed to fester. They must be opened. They must be cleansed. And balm must be poured on them, so they can heal. This is not to be obsessed with the past. It is to take care that the past is properly dealt with for the sake of the future.

Motivated by this desire to render the past ‘passed’ in the substantial sense of being ‘dead’ or ‘over and done with’, modern truth commissions dedicate most of their time to two activities: the holding of public hearings and production of a final report.

This is a relatively recent development. Early truth commissions did not hold public hearings and were largely fact-finding bodies. However, ever since the South African TRC of the 1990s, truth commissions have held hearings as a stage for various actors – victims, perpetrators, political parties, state institutions and so forth – to present their account of past wrongs. The underlying idea is that people will have a chance to speak and be heard, and thus regain their humanity; that a wider (and engaged) audience will bear witness to a new human rights-conscious regime; and the overview provided will feed into, and help legitimise, a final report. The latter in turn intended to record and acknowledge past wrongs and provide recommendations that can help to promote truth, justice and reconciliation.

However, while much hope is often placed, and much time and money expended, on truth commissions and their hearings and final reports, it is evident that these processes generally fall far short of ambitious goals and high expectations. But what explains this gap between aspiration and reality?

This is one of the questions that I address in a new book – Performances of Injustice: The politics of truth, justice and reconciliation in Kenya – which analyses several transitional justice mechanisms introduced following Kenya’s post-election violence of 2007/8 when over 1,000 people were killed and almost 700,000 were displaced.

This includes the establishment of the Truth, Justice and Reconciliation Commission (TJRC). Significantly, the Commission’s mandate recognised that, while the 2007/8 post-election violence was triggered by a disputed election, it was fuelled by more deep-rooted problems.  In turn, the Commission was tasked with investigating a wide array of injustices – from state repression and causes of political violence to perceptions of economic marginalisation and irregular land acquisition – between Kenya’s independence in 1963 and the end of the post-election violence in February 2008.

Established through an Act of Parliament in 2008, and operational from 2009 to 2013, the TJRC sought to meet its mandate, in large part, by collecting statements (with over 40,000 collected in total), holding public and women’s hearings in 35 locations across the country and adversely mentioned person (AMP) hearings in western and Nairobi, and publishing a substantial final report that runs to over 2,000 pages.

Despite such achievements, the Commission was soon mired in controversy with calls for the chairman – who was soon linked to three injustices that the Commission was meant to investigate – to resign, while the public hearings attracted little media attention, and the final report is yet to be discussed in parliament let alone implemented.

The Kenyan experience highlights a range of lessons and insights. This includes the fact – as recently outlined in a piece for The Conversation – that transitional justice mechanisms are not ‘tools’ that can be introduced in different contexts with the same effect. Instead, their success (or failure) rests on their design, approach and personnel – all of which are incredibly difficult to get right – but also on their evaluation and reception, and thus on their broader contexts, which commissions have little or no control over.

However, the lessons that can be drawn go beyond reception and context and extend to the inherent shortcomings of such an approach.

First, while victims appreciate a chance to speak and be heard, the majority clearly submitted statements or memoranda or provided testimony in the hope that they would be heard and that some action would be taken to redress the injustices described. As one woman explained after a women’s hearing in Nakuru, she was glad that she had spoken and how, having told her story, the Commission would ‘come in and help.’

To be fair, the TJRC’s founders were aware of the inadequacies of speaking, which is why they included ‘justice’ in the title and gave the Commission powers to recommend further investigations, prosecutions, lustration (or a ban from holding public office), reparations and institutional and constitutional reforms.

However, on the question of whether recommendations would be implemented, the Commission rather naively relied on the TJRC Act (2008), which stipulated that ‘recommendations shall be implemented.’ However, such legal provisions proved insufficient. Amidst general scepticism about the Commission’s work, parliament amended the TJRC Act in December 2013 to ensure that the report needed to be considered by the National Assembly – something that is yet to happen.

Moreover, to document and acknowledge the truth requires that one hears from both victims and perpetrators. However, the latter often have little motivation, and much to lose, from telling the truth. This was evident in Kenya where, during the AMP hearings I attended, where I heard little that was new and not a single admission of personal responsibility or guilt. Instead, testimonies were characterised by five discursive strands of responsibility denied: denial through a transfer of responsibility, denial through a questioning of sources, denial through amnesia, denial through a reinterpretation of events and an assertion of victimhood, and denial that events constituted a wrongdoing. However, while AMPs denied responsibility, none denied that injustices had occurred. As a result, while the hearings provided little clarity on how and why a series of reported events may have occurred, they simultaneously drew attention to, and recognised, past injustice. In this way, they provided a public enactment of impunity: Kenya’s history was replete with injustice, but AMPs were unwilling to shoulder any responsibility for it.

This ongoing culture of impunity points to another issue, which is that – for most victims – injustices clearly do not belong to the past but to the present and future. The loss of a person or income, for example, often constitutes a course that now seems beyond reach – from the hardship that accompanies the loss of a wage earner to the diminished opportunities that stem from a child’s extended absence from school. However, the past also persists in other ways, from the injustices that never ended, such as gross inequalities or corruption, to fears of repetition and experiences of new injustice.

Unfortunately, the idea that one can ‘look backwards to reach forwards’ downplays the complex ways in which the past actually persists, and possible futures infringe on the present. This is problematic since it can encourage a situation where small changes dampen demands for more substantive reform. At the same time, it can facilitate a politicised assertion of closure that excludes those who do not buy into the absence of the past, the newness of the present, or the desirability of imagined futures and provides a resource to those who seek to present such ‘difficult people’ as untrusting, unreasonable and unpatriotic.

This is not to say that truth commissions are useless and should never be considered. On the contrary, many view speaking as better than silence, while the commission’s report provides a historical overview of injustice in Kenya and a range of recommendations that activists and politicians are using to lobby for justice and reform.

However, when introduced, truth commissions should be more aware of the importance of persuasive performances and how their initial reception and longer-term impact is shaped by broader socio-economic, political and historic contexts. Truth commissions also need to adopt a more complex understanding of the ways in which the past persists, and possible futures infringe on the present and avoid easy assertions of closure.

Ultimately, such ambitious goals as truth, justice and reconciliation require not Freudian ‘talk therapy’, although catharsis and psycho-social support are often appreciated, but an ongoing political struggle, and substantive socio-economic and political change, which something like a truth commission can recommend, and sometimes contribute to, but cannot be expected to achieve.

This article was first published in the Review of African political Economy (ROAPE).