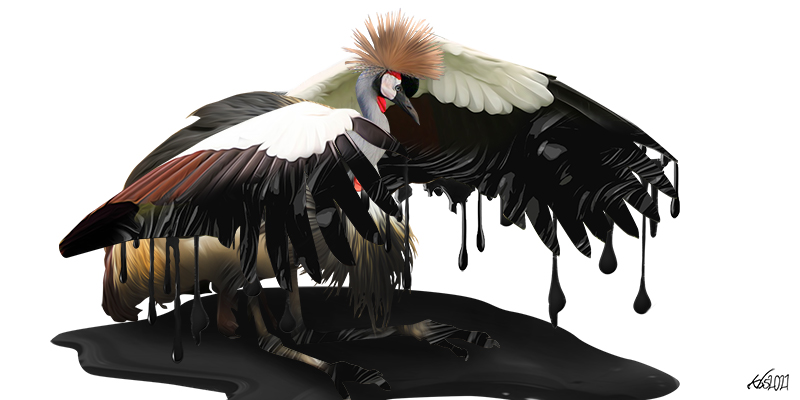 For retired Anglican clergyman Reverend Fred Msimenta, the negative effects of his country‘s massive oil venture have begun to show early, and they are being manifested right in his backyard.

A few metres from his house in Butimba East village in Kikuube District in Western Uganda, lies what remains of his former half-acre tree plantation, which has now been reduced to mere stumps. He had to cut down the eucalyptus trees and sell them to traders before they had reached maturity to give way to the East African Crude Oil Pipeline (EACOP) project. His land was identified for compulsory acquisition as it lies right on the 30 metre-wide corridor along which the pipeline will run.

Reverend Msimenta is not alone; a similar fate has befallen his neighbours in this fertile farming region where — besides coffee, maize, beans, sweet potatoes and a host of other crops — farmers also engage in commercial agroforestry, giving the area a beautiful green cover.

“We do not know how this area will look like in the future after this project disturbs nature. Already trees are being cut down to give way to the pipeline and to open up access roads. Without doubt we will lose a lot of animal habitats, forests and wetlands,” he says.

“There are many fears in people’s minds, a lot of communal land including forests will be taken up by the pipeline and we are really apprehensive over what will happen,” adds the clergyman.

The massive pipeline will move oil from the East African country’s oilfields in the larger Albertine region eastwards for some 1,443 kilometres to the port of Tanga on the Indian Ocean coast of neighbouring Tanzania for export, Uganda being a landlocked country.

It will be the world ‘s longest electrically-heated crude pipeline, with numerous pumping stations  along the route to the Tanga terminal, due to what experts say is the “waxy” nature of the crude.

It is partly because of this that the project — which will cost the two countries and their partners, China National offshore Oil Corporation (CNOOC) and Total, in the region of US$3.5 billion — that Msimenta and his neighbours are harbouring numerous fears over the environment.

It’s sheer scale aside, EACOP is just but a part of the “Pearl of Africa”’s huge fossil fuels venture that also includes Tilenga and Kingfisher oil development projects, the latter consisting of six wells located inside the biodiversity-rich Murchison Falls National Park. The projects jointly hold an estimated six billion barrels of oil reserves, 1.4 billion of which is classified as recoverable.

It will be the world’s longest electrically-heated crude pipeline.

More than 20,000 people including landowners and “land users” will be affected by the whole enterprise, which will include six oil fields and 400 wells in 31 locations under Tilenga alone. Out of these, Total claims that no more ten will be drilled in the wildlife park.

“We hear news of spills in other countries around the world and wonder what would become of our land if the same were to happen here, but when we ask the authorities tell us that this will be a sophisticated conduit that can neither leak nor break,” Msimenta says.

Like many people here, the community leader expresses concerns for the Wambavya river and its many tributaries that emanate from one of Uganda’s most notable wetlands. In this locality, for example, is to be found the Ijumagambo wetland that gives rise to a stream of the same name which empties into Wambavya, the most important river in western Uganda.

Any threat to the river, Msimenta believes, would jeopardise the Kabalega Electric Station, a 9 MW hydropower station constructed along the river. Wambavya is also critical to the survival of Lake Albert, a trans-boundary resource shared with the Democratic Republic Congo, the river being its main inlet to the south and a source of livelihood for thousands of people in both countries.

“We hear news of spills in other countries around the world and wonder what would become of our land if the same were to happen here.”

These fears are however disputed by the country’s oil sector regulator, the Petroleum Authority of Uganda (PAU), which claims to have taken environmental and social measures to address both the direct and indirect impacts of the projects.

“Various Environment and Social Management plans are in place to address any cumulative and or indirect impacts. These also provide for various mitigation measures and environmental safeguards. In addition, continuous sensitisation programmes are undertaken within the communities to mitigate such impacts,” says Ernest Rubondo, PAU Executive Director.

Rubondo claims that the pipes will be insulated and buried to ensure there is no damage; and that Environmental and Social Impact Assessments (ESIAs) have been undertaken by the oil companies in consultation with state institutions and the communities concerned.

Some of the mitigation measures Rubondo claims will also be taken will include management of dust and equipment. He says that “combustion equipment will be designed to meet national regulations and project standards regarding air quality,” adding that “The project will also provide for progressive vegetation and habitat restoration as part of efforts to curb emissions.”

Total is equally defending itself against claims of possible adverse environmental effects, saying that it will implement actions that “generate a positive net impact on biodiversity”. Total also says that it will only use less than one per cent of Murchison Park land for its activities.

“The route of the EACOP pipeline has been designed to minimise its environmental impact. Careful attention was paid to watercourses, and “horizontal’ drilling will be used for the most sensitive case”. It said in a statement.

Environmental groups are however having none of it, insisting that the three projects — EACOP, Tilenga and Kingfisher — will spell doom for the environment, that they will affect or have affected over 30 “ecosensitive” areas, including Budongo Forest, and the Murchison Falls-Albert Delta Wetland, a critical bird area protected under the Ramsar convention.

“Of major concern is the fact that a third of the EACOP will be constructed in the Lake Victoria basin. This poses immense oil pollution risks yet project developers have failed to provide adequate mitigation measures to address the threats. As a result, court cases have been filed in courts in Uganda, the East African Court of Justice (EACJ) and in France,” said Dickens Kamugisha, CEO of AFIEGO, Uganda’s foremost energy policy research and advocacy body.

Adow notes that, considering Africa’s vulnerability to climate change, there is no reason for continued investment in fossil fuels, since there exists an abundance of potential for renewable energy — wind, solar and geothermal.

“The far-reaching environmental impacts, displacements, changes to groundwater and risk to our health cannot be put on the same scale with short-sighted, short-lived economic interests,” he argues, adding that it was satisfying to know that banks like Barclays and Credit Suisse had reportedly pulled out of financing EACOP. “Indeed, if more international financial institutions make commitments to prioritise green projects, such initiatives like EACOP will not see the light of day,” he says.

Meanwhile, despite the objections, on 11 April the presidents of Uganda and Tanzania inked the final agreement for the joint venture, paving the way for the commencement of EACOP as soon as funding is secured. Uganda president Yoweri Museveni and his Tanzania counterpart Samia Suluhu Hassan signed the deal in Kampala, moving the controversial project closer to reality.

It was satisfying to know that banks like Barclays and Credit Suisse had reportedly pulled out of financing EACOP.

Last year, groups including the Centre for Food and Adequate Living Rights (CEFROHT), the African Institute for Energy Governance (AFIEGO), Natural Justice-Kenya and the Centre for Strategic Litigation Limited, filed a case against the Attorney Generals of Uganda and Tanzania, and the regional bloc — East African Community (EAC) — at the East African Court of Justice.

Besides seeking an injunction against the construction of the pipeline, they are pursuing nullification of a September 2020 Host Government Agreement (HGA) signed by the governments of Uganda and Tanzania with Total, in a ceremony graced by President Museveni of Uganda and the former president of Tanzanian, the late John Pombe Magufuli.

“Oil activities in Lake Albert region have already displaced some 7,000 people including 3,500 children and 1,500 women, and no compensation has been offered to them since 2012, even after we sued on their behalf in high court in Uganda in 2014,” say the petitioners.

The EAC has been enjoined in the case since the organisation is a signatory to various international treaties and agreements on the environment and human rights.

Considering Africa’s vulnerability to climate change, there is no reason for continued investment in fossil fuels since there exists an abundance of potential for renewable energy.

The petitioners are also seeking a declaration that EACOP is a violation of the fundamental rights of the people of East Africa. They say that the pipeline will traverse forests, lakes, wildlife habitats, farmlands and settlements, endangering not just the biodiversity, but lives and livelihoods as well.

Kamugisha says that opposition to the project has led to constant harassment of activists in Uganda through intimidation and imposition of stringent rules for the groups.

Harassment aside, it is not yet clear if EACOP owners will be able to secure the US$2.5 billion external financing needed for the project, if reports by the Stop EACOP campaign are true. The alliance reported that major banks in France — BNP Paribas, Société Générale and Crédit Agricole — were withdrawing their earlier commitment to finance the project.

The EACOP is unlikely to remain Africa’s largest pipeline for long; Angola and Zambia have signed a Memorandum of Understanding for a feasibility study for a US$5 billion pipeline to transport oil and gas from Angola to Zambia.

This piece was first published in Science Africa. You can find the original article here