IMF and SAPs 2.0: The Four Horsemen of the Apocalypse are Riding into Town 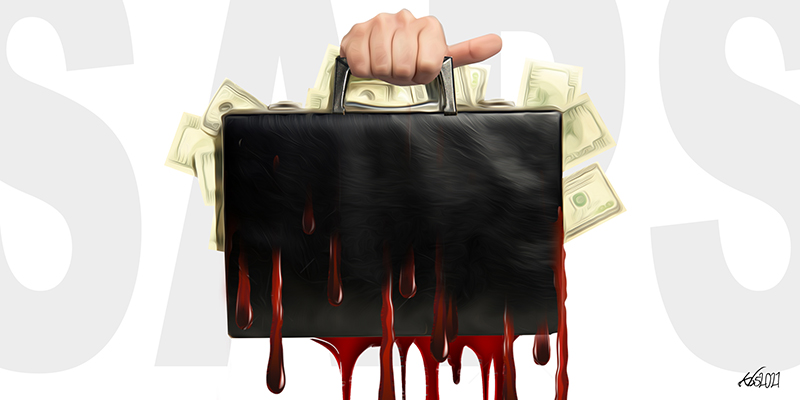 The International Monetary Fund’s announcement on the 2nd of April 2020 that it had approved a US$ 2.3 billion loan for Kenya prompted David Ndii to spell it out to young #KOT (Kenyans on Twitter) that “the loan Kenya has taken is called a structural adjustment loan (SAPs). It comes with austerity (tax raises, spending cuts, downsizing) to keep Kenya creditworthy so that we can continue borrowing and servicing debt”, adding that the “IMF is not here for fun. Ask older people.” With this last quip, Ndii was referring to the economic hardship visited on Kenyans under the structural adjustment programmes of the 80s and 90s.

Well, I’m old enough to remember; except that I was not in the country. I had left home, left the country, leaving behind parents who were still working, still putting my siblings through school. Parents with permanent and pensionable jobs, who were still paying the mortgage on their modest “maisonette” in a middle class Nairobi neighbourhood.

In those pre-Internet, pre-WhatsApp days, much use was made of the post office and I have kept the piles of aerogramme letters that used to bring me news of home. In those letters my parents said nothing of the deteriorating economic situation, unwilling to burden me with worries about which I could do nothing, keeping body and soul together being just about all I could manage in that foreign land where I had gone to further my education.

My brother Tony’s letters should have warned me that all was not well back home but he wrote so hilariously about the status conferred on those men who could afford second-hand underwear from America, complete with stars and stripes, that the sub-text went right over my head. I came back home for the first time after five years — having left college and found a first job — to find parents that had visibly aged beyond their years and a home that was palpably less well-off financially than when I had left. I’m a Kicomi girl and something in me rebelled against second-hand clothes, second-hand things. It seemed that in my absence Kenya had regressed to the time before independence, the years of hope and optimism wiped away by the neoliberal designs of the Bretton Woods twins. I remember wanting to flee; I wanted to go back to not knowing, to finding my family exactly as I had left it — seemingly thriving, happy, hopeful.

Now, after eight years of irresponsible government borrowing, it appears that I am to experience the effects of a Structural Adjustment Programme first-hand, and I wonder how things could possibly be worse than they already are.

When speaking to Nancy* a couple of weeks back about the COVID-19 situation at the Nyahururu County Referral Hospital in Laikipia County, she brought up the issue of pregnant women having to share beds in the maternity ward yet — quite apart from the fact that this arrangement is unacceptable whichever way you look at it — patients admitted to the ward are not routinely tested for COVID-19.

Nancy told me that candidates for emergency caesarean sections or surgery for ectopic and intra-abdominal pregnancies must wait their turn at the door to the operating theatre. Construction of a new maternity wing, complete with its own operating theatre, has ground to a halt because, rumour has it, the contractor has not been paid. The 120-bed facility should have been completed in mid-2020 to ease congestion at the Nyahururu hospital whose catchment area for referrals includes large swathes of both Nyandarua and Laikipia counties because of its geographical location.

According to Nancy, vital medicine used to prevent excessive bleeding in newly delivered mothers has not been available at her hospital since January; patients have to buy the medication themselves. This issue was also raised on Twitter by Dr Mercy Korir who, referring to the Nanyuki Teaching and Referral Hospital — the only other major hospital in Laikipia County — said that lack of emergency medication in the maternity ward was putting the lives of mothers at risk. Judging by the responses to that tweet, this dire situation is not peculiar to the Nanyuki hospital; how much worse is it going to get under the imminent SAP?

Kenya was among the first countries to sign on for a SAP in 1980 when commodity prices went through the floor and the 1973 oil crisis hit, bringing to a painful halt a post-independence decade of sustained growth and prosperity. The country was to remain under one form of structural adjustment or another from then on until 1996.

Damaris Parsitau, who has written about the impact of Structural Adjustment Programmes on women’s health in Kenya, already reported in her 2008 study that, “at Nakuru District Hospital in Kenya, for example, expectant mothers are required to buy gloves, surgical blades, disinfectants and syringes in preparation for childbirth”. It would appear that not much has changed since then.

The constitution of the World Health Organisation states that “the enjoyment of the highest attainable standard of health is one of the fundamental rights of every human being without distinction of race, religion, political belief, economic or social condition” and that “governments have a responsibility for the health of their peoples which can be fulfilled only by the provision of adequate health and social measures.”

The WHO should have added gender as a discrimination criteria. Parsitau notes that “compared to men, women in Kenya have less access to medical care, are more likely to be malnourished, poor, and illiterate, and even work longer and harder. The situation exacerbates women’s reproductive role, which increases their vulnerability to morbidity and mortality.”

With economic decline in the 80s, and the implementation of structural adjustment measures that resulted in cutbacks in funding and the introduction of cost sharing in a sector where from independence the government had borne the cost of providing free healthcare, the effects were inevitably felt most by the poor, the majority of who — in Kenya as in the rest of the world — are women.

A more recent review of studies carried out on the effect of SAPs on child and maternal health published in 2017 finds that “in their current form, structural adjustment programmes are incongruous with achieving SDGs [Sustainable Development Goals] 3.1 and 3.2, which stipulate reductions in neonatal, under-5, and maternal mortality rates. It is telling that even the IMF’s Independent Evaluation Office, in assessing the performance of structural adjustment loans, noted that ‘outcomes such as maternal and infant mortality rates have generally not improved.’”

The review also says that “adjustment programmes commonly promote decentralisation of health systems [which] may produce a more fractious and unequal implementation of services — including those for child and maternal health — nationally. Furthermore, lack of co-ordination in decentralised systems can hinder efforts to combat major disease outbreaks”. Well, we are in the throes of a devastating global pandemic which has brought this observation into sharp relief. According to the Ministry of Health, as of the 6th of April, 325,592 people had been vaccinated against COVID-19. Of those, 33 per cent were in Nairobi County, which accounts for just 9.2 per cent of the country’s total population of 47,564,296 people.

The Constitution of Kenya 2010 provides the legal framework for a rights-based approach to health and is the basis for the rollout of Universal Health Coverage (UHC) that was announced by President Uhuru Kenyatta on 12 December 2018 — with the customary fanfare — as part of the “Big Four Agenda” to be fulfilled before his departure in 2022.

However, a KEMRI-Wellcome Trust policy brief states that UHC is still some distance to achieving 100 per cent population coverage and recommends that “the Kenyan government should increase public financing of the health sector. Specifically, the level of public funding for healthcare in Kenya should double, if the threshold (5% of GDP) … is to be reached” and that “Kenya should reorient its health financing strategy away from a focus on contributory, voluntary health insurance, and instead recognize that increased tax funding is critical.”

These recommendations, it would seem to me, run counter to the conditionalities habitually imposed by the IMF and it is therefore not clear how the government will deliver UHC nation-wide by next year if this latest SAP is accompanied by budgetary cutbacks in the healthcare sector.

With the coronavirus graft scandal and the disappearance of medical supplies donated by Jack Ma still fresh on their minds, Kenyans are not inclined to believe that the IMF billions will indeed go to “support[ing] the next phase of the authorities’ COVID-19 response and their plan to reduce debt vulnerabilities while safeguarding resources to protect vulnerable groups”, as the IMF has claimed.

#KOT have — with outrage, with humour, vociferously — rejected this latest loan, tweeting the IMF in their hundreds and inundating the organisation’s Facebook page with demands that the IMF rescind its decision. An online petition had garnered more than 200,000 signatures within days of the IMF’s announcement. Whether the IMF will review its decision is moot. The prevailing economic climate is such that we are damned if we do take the loan, and damned if we don’t.

Structural adjustment supposedly “encourages countries to become economically self-sufficient by creating an environment that is friendly to innovation, investment and growth”, but the recidivist nature of the programmes suggests that either the Kenyan government is a recalcitrant pupil or SAPs simply don’t work. I would say it is both.

But the Kenyan government has not just been a recalcitrant pupil; it has also been a consistently profligate one. While SAPs do indeed provide for “safeguarding resources to protect vulnerable groups”, political choices are made that sacrifice the welfare of the ordinary Kenyan at the altar of grandiose infrastructure projects, based on the fiction peddled by international financial institutions that infrastructure-led growth can generate enough income to service debt. And when resources are not being wasted on “legacy” projects, they are embezzled on a scale that literally boggles the mind. We can no longer speak of runaway corruption; a new lexicon is required to describe this phenomenon which pervades every facet of our lives and which has rendered the years of sacrifice our parents endured meaningless and put us in debt bondage for many more generations to come. David Ndii long warned us that this moment was coming. It is here.