John Magufuli: The Death of a Denier-in-Chief 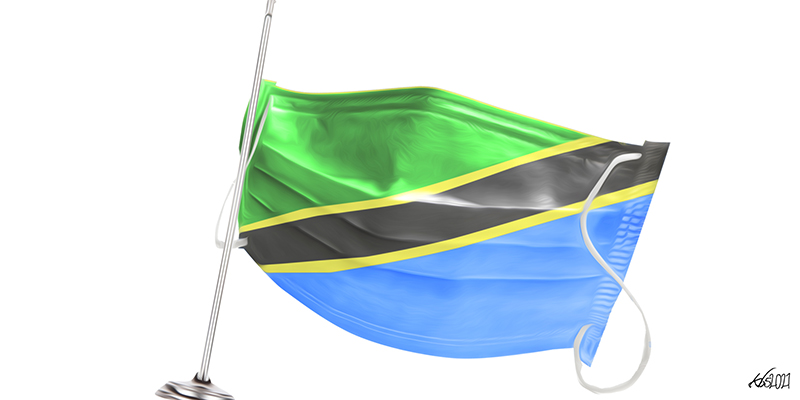 Tanzania, a country that produced Julius Nyerere, is a country tottering on the precipice of a pandemic catastrophe. The philosopher-president ruled for 23 years and put the nation on the international map as a frontline state that stood up to Apartheid South Africa and helped liberate modern Uganda by ridding it of Idi Amin.

With the abrupt death of its populist president John Magufuli on March 17, 2021, ostensibly from a COVID-19 related ailment, Tanzania finds itself at a crossroads, insofar as tackling the devasting disease is concerned. Magufuli who was the commander-in-chief of the armed forces, became the denier-in-chief of COVID-19. The disease has decimated scores of Tanzanians, including top government officials.

Magufuli was hailed as a tough anti-corruption crusader, as he entered state house in 2015. Ordinary Tanzanians initially saw him as their saviour in the fight against institutionalised state corruption. The international media also saw him as a man keen on tackling state corruption, “but Magufuli was all about optics,” said a Tanzanian journalist. “He wasn’t fighting state corruption pers se, what he was doing was to get rid of Jakaya Kikwete’s (immediate former president) networks in the government and replace with his own. So, it was just a matter of time before Tanzanians and the world realised Magufuli was just interested in musical chairs.”

Magufuli was re-elected on October 28, 2020 in one of the most controversial post-Nyerere’s Tanzania elections with a whopping 84 percent. His “true colours” revealed themselves after Benjamin Mkapa’s death in July 2020. After mourning the ex-president, Magufuli turned his attention to the business of crippling the opposition.

Magufuli was a protégé of Mkapa who served as president between 1995–2005. It was Mkapa, who in 2015, prevailed on the ruling Chama Cha Mapinduzi (CCM, ‘Party of the Revolution’) national executive council (NEC) to pick newcomer Magufuli as its flagbearer for what was to be a hotly contested general election in October 2015. Magufuli was then primed to run against Edward Lowassa, a CCM stalwart, who had bolted to Chama Cha Democrasia na Maendeleo (CHADEMA), after not clinching the CCM ticket, in which he was touted as one of the hot favourites.

The “true colours” was the ruthlessness with which Magufuli pursued the opposition in the lead-up to the presidential elections. That massive victory came in the backdrop of President Magufuli’s continuous campaigns since being inaugurated as the fifth president in 2015. “Magufuli never stopped campaigning,” said a Tanzanian journalist: “He rode on the wave of populism – dishing out money and favours to select supporters and well-choreographed individuals wherever he went.”

The 2020 Magufuli campaigns were a mirror-image of his mentor’s similar campaigns in 2000. Just like Mkapa’s mission was to presumably pulverize the nascent opposition, Magufuli’s mission 20 years later was similarly to ensure that the “irritating” opposition is no more and is, literary ran out of town. Mkapa in the October 2000 elections unleashed so much violence on the opposition that many of its supporters sought exile in neighbouring Kenya, after the elections.

Mkapa’s use of unmitigated force by Jeshi la Polisi (Tanzania has a police force, as opposed to a police service) and Field Force Unit (FFU), a paramilitary outfit much like Kenya’s dreaded General Service Unit (GSU) was unprecedented in Tanzanian politics. Just like Magufuli, it seems Mkapa’s “true colours” were revealed only after his mentor’s death the previous year on October 14, 1999. Mkapa was a protégé of the founding father Julius Kambarage Nyerere.

It was Nyerere who held Mkapa’s hand in 1995, after influencing his nomination by CCM, and single-handedly campaigned for him throughout the country. Tanzania held its first multiparty general elections in 1995, pitting CCM against a disparate opposition for the first time since its formation in 1977.

He dished out money and favours to select supporters.

Revisiting this unparalleled violence orchestrated on fellow Tanzanians, Mkapa, the former journalist-turned-diplomat-turned-president in his memoirs: My Life, My Purpose – A Tanzanian President Remembers published in January 2019, regretted the 2000 election ordeal. To some Tanzanian journalists and political analysts, Mkapa and Magufuli are today referred to as the chief advocates and perpetrators of state violence in post-independent Tanzania.

Both the presidential elections of 2000 and 2020 happened under a cloud of America’s own election problems: In 2000, it was the “Florida fiasco.” Florida was then governed by the Republican’s presidential candidate, George Bush’s brother, Jeb Bush. Bush was running against the Democratic Party’s Al Gore. Jeb was allegedly accused of rigging on behalf of his elder brother.

Like the Americans say, the electoral college vote was too close to call: the vote was not only going to determine who was going to be the winner of the states’s 25 votes, but the next president after Bill Clinton. A recount was called by the Democrats and for a brief moment, the democrats believed they had taken it, only for the Republicans to also ask for their own recount. Bush won with a razor thin win vote. The democrats were not persuaded. To cut a long story short, the sunshine state’s case found itself in the supreme court, where the republican-led court declared George Bush the eventual winner.

In 2020, with both the Tanzania and US elections being held days apart, America once again came under the world spotlight after the “Pennsylvania problem”, in which President Donald Trump claimed his votes had been tampered with and paid for a recount. The MAGA Republican Party candidate was defending his seat against “sleepy Joe” a derogatory tag given by Trump to Joe Biden.

The citing of both examples here is to emphasise that America in 2000 and 2020 could not claim a moral compass to the Tanzania government’s excesses in its elections. Covering the 2000 elections, I remember in Dar es Salaam, a CCM top official telling us journalists that America could not lecture Tanzania on matters election – “they should first deal with their own election rigging in Florida, before accusing us of unleashing violence and rigging the islands’ results.”

Nyerere had always been opposed to the twin islands of Pemba and Zanzibar’s divorce with the mainland Tanganyika – a sticking sore thump between the mainland and the islands, since the republic turned to plural politics. But he never advocated state violence, instead, he sued for dialogue and persuasion.

Magufuli was determined to put the opposition in its place this time round: In a parliament of 261 members, the opposition only won seven. “By the time I’m through with Tanzania, there’ll be no opposition in the country,” said the deceased in one of his campaign rallies.

There is not a doubt that he loathed the opposition, so much so that he warned the regional commissioners and election officials, “I don’t pay you so that you can allow opposition to win.” Tume la Uchaguzi (National Election Commission) flatly refused any presidential debates and told the opposition it could debate among itself if it so wished.

“In Tanzania, CCM ni tasisi,” a local journalist reiterated to me. Literary it means the ruling party CCM is an institution. Figuratively it means, CCM is Tanzania and Tanzania is CCM. Anybody going against the “wishes of the party” would be crushed. The CCM’s propaganda machinery against the leading opposition figure Tundu Lissu of CHADEMA was geared to pulverize all his efforts of running a successful campaign. “He was being hunted down like a wild animal,” said the journalist.

Magufuli claimed Lissu was a supporter of LGBTQ and that he was a tool of the West being used to campaign for mashoga, homosexuals’ rights. Several African presidents during their re-election campaigns have turned the hot-button issue of LGBTQ, their favourite bogeyman: In the terribly conservative African societies, nothing evokes emotions of antipathy like suggesting gay-ism could be mainstreamed. Yoweri Museveni has done it, John Magufuli did it, just like Robert Mugabe did it before him.

CCM being Tanzania and Tanzania being CCM, not even the bravest of private media would dare report on the opposition or against Magufuli and CCM. “There was total blackout on the opposition by the media. All what Tanzanians could read and listen to, on politics, was on the ‘indefatigable Magu’ and his infrastructural developments,” said my Tanzanian journalist friend. Hence, Tanzania media did not report on politics – it reported on Magufuli, the person.

By the time I’m through with Tanzania, there’ll be no opposition in the country

Being heavy users of social media, Tanzanians turned to VPN – virtual private network. Found as an app in many smart phones, it protects one’s communication from snoopers like government agencies and hackers. What VPN does when activated is to bypass the conventional internet service providers (ISP) when connecting to the internet. In the case of Tanzania’s government shutting down its ISP, tech savvy Tanzanians resorted to VPN to access facebook and especially Twitter, to fend off the states’s eavesdropping.

This is the reason why Magufuli ordered all social media outlets shut, said the journalist. All what the Tanzania Communication Authority needed was a nod from Magufuli. A consumer of foreign news outlets, Tanzanians also resorted to BBC, Deutsche Welle (Sauti ya Ujerumani) and VOA, to stay informed on their country’s politics. “This is how many of them were informed and kept tabs on Lissu’s campaigns,” said the journalist.

Even after being sworn-in for the second term, President Magufuli pursued the browbeaten opposition. Chief opposition figure Lissu had to escape the country a second time. “Run or be run over, these people are not joking,” Lissu was ostensibly warned by his intelligence team. In September 2017, Lissu had survived an assassination attempt in Dodoma, that saw his vehicle sprayed with bullets by “unknown” assailants, as he left parliament for his house for lunch. On November 7, 10 days after the elections were over, he hid at the German embassy, then onwards to Brussels, where he had been recuperating for three years after treatment in Nairobi.

The former MP for Arusha Urban Godbless Lema also skipped the country and sought refuge in Kenya after claiming government people were after him. Lema, with his family was granted asylum in Canada.

Nyerere’s CCM may have operated in the one-party era during the cold war, but many Tanzanians of the post-independent generation remember those days with nostalgia. “The party was more democratic and free, unlike today,” said a former CCM mkereketwa (party diehard).

Magufuli’s populism was laced with autocratic tendencies. He told fellow Tanzanians msinijaribu mimi ni jiwe (don’t try me, I’m as tough as a rock), meaning he prided himself in being tough-headed.

“Magufuli’s CCM in the era of multiparty brooks no dissent, is dictatorial and dangerous, while Nyerere’s CCM preferred a palaver type of democracy where party issues were discussed until it arrived at a consensus,” said a University of Dar es Salaam don.