For J.M’s Ten Million Beggars, the Hustler vs Dynasty Narrative is a Red Herring 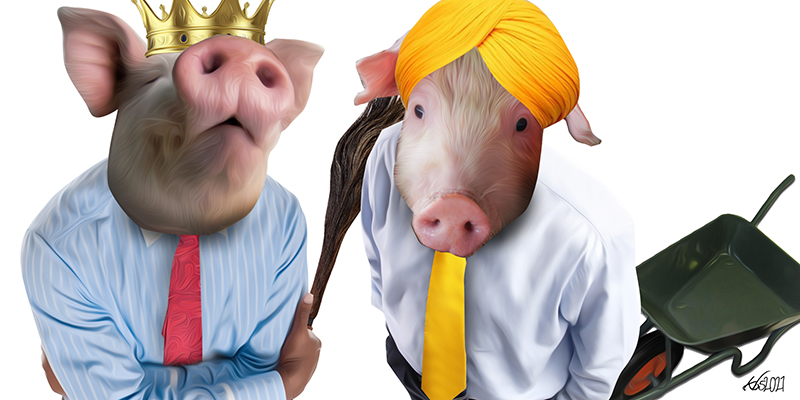 Stifling the “hustler” vs “dynasty” debate will not save us from the imminent implosion resulting from Kenya’s obscene inequalities. While the debate is a welcome distraction from our frequent divisive tribal politics, leaders in government and society are frightened that it might lead to class wars. Our sustained subtle, yet brazen, war against the poor has made class conflict inevitable. If only we had listened to Hon. J. M. Kariuki, the assassinated former Member of Parliament for Nyandarua (1969-1975), and provided the poor with the means to develop themselves, perhaps the prospect of revolt would now be remote.

Could this be the angry ghost of J.M. Kariuki coming back to haunt us? Listen to his voice still crying from the grave, as did his supporters at a rally in 1974: “We do not want a Kenya of ten millionaires and ten million beggars. Our people who died in the forests died with a handful of soil in their right hands, believing they had fallen in a noble struggle to regain our land . . . But we are being carried away by selfishness and greed. Unless something is done now, the land question will be answered by bloodshed” (quoted by Prof. Simiyu Wandibba in his book J.M. Kariuki). Fired by this speech, his followers set ablaze 700 acres of wheat on Mzee Jomo Kenyatta’s farm in Rongai and slaughtered cattle with malice. Thus did J.M. invite his death.

What Hon. William Ruto propounds in his hustler vs dynasty debate is a shrewd way of redefining Kenyan identity politics. Ruto is re-directing the political narrative from the “us” vs “them” of tribalism, to one characterised by the poor and desperate (hustlers) who have seen subsequent governments betray their hopes for a better life, pitted against “them”, Ruto’s rivals, the offspring of politicians born to unfair and unearned privilege.

Wycliffe Muga, the Star newspaper columnist, has eloquently described them as the “sons of a hereditary political elite who absorbed all the benefits that came with independence, leaving ‘the rest of us’ destitute and having no choice but to beg for the crumbs under their table.” By opting for an alternative approach, Ruto hopes to avoid playing the tribal card to attain the presidency. For, besides his own, he would need the support of at least one other of the five big tribes who often reserve support for their own sons unless there is a brokered alliance. But even then, the underlying logic of Kenyan politics remains that of identity politics, which creates a binary narrative of “us” against “them”.

Meanwhile, Ruto has not only radicalised the poor, but he has also hastened the country’s hour of reckoning — judgement for the years of neglect of the poor — and this may ignite the tinder sooner we imagine.

In their article in The Elephant, Dauti Kahura and Akoko Akech observe that, “Ruto might have belatedly discovered the great socio-economic divide between the walala-hoi and the walala-hai in Kenya”. Ruto has galvanised the poor and their plight around the banner of the “hustler nation”, a nation aspiring to erase the tribal or geographical lines that have kept Kenyans apart. As a result the poor are restless as they compare their state with the ease of the lives of the affluent. But Ruto is not organising to awaken class-consciousness among the exploited.  ‘As Thandika Mkandawire, citing Karl Marx, observed, “The existence of class may portend class struggles, but it does not automatically trigger them. It is not enough that classes exist in themselves, they must also be for themselves”’, Kahura and Akech further reiterate.

The problem kicks in immediately he points to the “dynasty”. In juxtaposing the hustlers and dynasty, the poor find a target of hate, an object of their wrath. This situation can easily slide into violence, the violence emerging only when the “us” see themselves as all good and the “them” as all evil.

I worry this controversy has led us to that radicalisation stage where the poor see themselves as the good children of light fighting evil forces of darkness. In our case, the so-called hustler nation believe they are against the deep-state which doesn’t care about them but wants to give to the dynasty that which is due to them. They believe that this collusion between deep-state and dynasty is preventing them from reaching prosperity and so they blame their situation on those who they perceive to be the cause of their wretchedness. Interestingly, the colonial state always feared the day when the masses would rise up and topple it. Unfortunately, Ruto is using the crisis of the underclass created by the colonial state and perpetuated by the political class for political expediency and for his own self-advancement.

By declaring himself the saviour of the hustlers from the dynasties, Ruto — who is devoid of any pro-democracy and pro-suffering citizens political credentials — is perceived to be antagonising the Kenyatta family’s political and financial interests. He has with precision stoked the anger of the poor against particular political elites he calls dynasties and the Odingas, the Kenyattas, the Mois and their associates have become the hustler nation’s enemy. So, one understands why President Uhuru Kenyatta considers Ruto’s dynasty vs hustler debate “a divisive and a major threat to the country’s security”, which he fears may degenerate into class warfare.

Hon. Paul Koinange, Chairman of the Parliamentary Administration and Security Committee errs in his call to criminalise the hustler vs dynasty narrative. If this is hate speech, as Koinange wants it classified, then neglect of the poor by their government is a worse form of hate speech. The application of policies favouring tender-preneurs at the expense of the majority poor, landless and unemployed will incite Kenyans against each other faster than the hustler vs dynasty narrative. The failure to provide public services for the poor and the spiralling wealth of the political class must be confronted.

We have been speeding down this slippery slope for years. According to the Kenya National Bureau of Statistics (KNBS) data released in December 2020, only 2.92 million Kenyans work in the formal sector, of which 1.34 million or 45.9 per cent earn less than Sh30,000. If we accept that the informal sector employs another 15 million Kenyans, an overwhelming majority (71 per cent) would be in micro-scale enterprises or in small-scale enterprises (which make up 26 per cent). This implies that 97 per cent of our enterprises are micro or small, and these are easily wound up. The situation is exasperated by the opulence at the top. The UK-based New World Wealth survey (2014) conducted over 5 years paints a grim picture of wealth distribution in Kenya. Of the country’s 43.1 million people then, 46 per cent lived below the poverty line, surviving on less than Sh172 ($2) a day.

The report shows that nearly two-thirds of Kenya’s Sh4.3 trillion ($50 billion) economy is controlled by a tiny clique of 8,300 super-wealthy individuals, highlighting the huge inequality between the rich and the poor. Without a clear understanding of these disparities, it is difficult to evaluate the currents that are conducive to the widening of this gap not to mention those that would bridge it. Hon. Koinange should be addressing these inequalities that the masses are awakening to rather than combatting the hustler narrative. Our government must be intentional in levelling the playing field, or live in perpetual fear like the British colonials who feared mass revolt across imaginary ethnic lines.

In Kenya, past injustices have yielded gross inequalities. In Reading on inequality in Kenya: Sectoral Dynamics and Perceptions, Okello and Gitau illustrate how state power is still being used to perpetuate differences in the sharing of political and economic welfare. Okello further observes that: “In a country where for a long time economic and political power was/has been heavily partisan, where the state appropriated for itself the role of being the agency for development, and where politics is highly ethnicised, the hypothesis of unequal treatment has been so easy to build.”

This, and not the euphoria of the hustler nation, is the pressure cooker that is about to explode. The horizontal manifestation of inequality stemming from the failure of state institutions and policies that have continued to allow inequalities to fester is what should be of concern to the state. How can the government not see the risk such extreme economic disparities within the population pose for the nation’s stability?