We Didn’t Make It for You: Vaccine Nationalism and the West’s Claim to the COVID-19 Jab 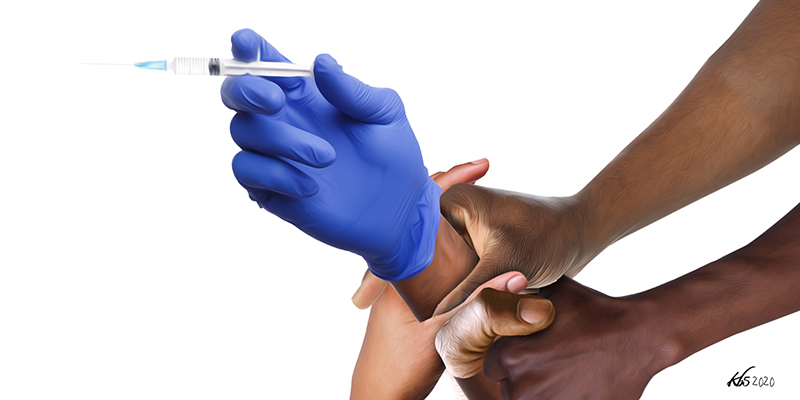 The sun dipped over the Nile in Jinja on New Year’s Eve. Shots were thrown back, toasts were raised, beer glasses clinking against each other. The night almost seemed like the usual run-of-the-mill end-of-year celebration, with the noticeably big exception that people kept their distance and the gates were locked to keep out roving members of the army looking to catch any reveler dumb enough to wander out mask-free past curfew and slam them with a myriad of charges until bribes were produced.

Now 2021 seems to be little more than the continuation of the cavalcade of horrors that kicked off the new decade. And once again the cynicism is proving justified. For the last couple of months, in various social settings, over various libations, statements of optimism had sprung forth regarding COVID-19 vaccine developments. These were invariably met with knowing laughter from someone at the table, an individual almost certainly all out of damns to give and sick of starry-eyed statements of global equity in these desperate and turbulent times.

And now, as if from some unexpected remnant of colonial history, it trickles out (not as a leading headline amongst the upstanding Western press) that the wealthy nations of the world are actively hoarding pre-orders of the multiple vaccines, and the pharmaceutical giants from which they sprang are largely avoiding sharing their advancements with the developing world.

It is not just the typical candidates that are guilty of this. By typical candidates I am pointing the finger at the United States, Britain, China, and France. But also at countries like Canada, which has pre-ordered enough vaccines to inject its population an estimated five times over. Are they also trying to stop the pandemic from affecting two generations of their ancestors and the local polar bear population? In fact, by mid-December last year, only 700 million doses had been secured for the entire “underdeveloped” world. That number is laughably low. Politics is being played well above people’s heads once again. Nothing has been learned, and mega-corporations are in lockstep with the very same austerity-measure-loving members of the Western political elite.

In essence, this means that pencil-pushing cheapskates in the big conference rooms of places with organizational titles like NATO, the UN and the EU are fully content to once again screw the developing world over if it doesn’t add a couple of hundred million euros to western coffers. Bailouts and massive pushes for research were fine for the good, upstanding, and largely white citizenry within their own borders. International cooperation to ensure worldwide immunity? Well, that might be a problem for those who pull the purse strings.

The only surprise with such behaviour is that there is any surprise at all within the global South. Is this not a continuing theme spread across years, regimes, decades, centuries? 2020 certainly didn’t shape up to be a boring year, dreadful though it was. It was almost enjoyable (albeit in a deeply perverse way) to watch the bullshit come flying from the mouths of nearly everyone in charge, including the deep tones of patriarchal condescension from powerful nations directed disdainfully at sub-Saharan African countries, even as their own fell into disrepair and chaos.

And isn’t it interesting that the entire global market and economic conditions truly were a series of well-constructed lies this entire time? Let me expand. In saying that the global state of affairs was a lie, it is a finger pointed squarely at the West. With a special round of kudos to the United States.

This lie has been easy to spot in media narratives, as they make little mention of smaller, less powerful nations rolling out their vaccine plans or how such goals will be attained. No. Instead, if the narrative remains that the powerful countries have defeated the virus, then it has been defeated. The rest of the issue can be quickly swept under the carpet. Out of sight, out of mind. What will the next phase look like? Will immigration restrictions on citizens of African countries get even more stringent? Will the song now be: “Well you have not been immunised against the pandemic, so surely how can you be allowed around our citizens who have?”

A darker-minded conspiracy theorist than I would almost view such a series of actions as intentional moves to quicken the crippling of “developing” nations from attaining that aspiration. Of course, citizens of such developing nations are still having their rights stripped back, curfews violently enforced, and media freedoms curtailed seemingly daily. Meanwhile, there are rumours that Kenya’s and Uganda’s rich and powerful are having their vaccines flown in on private planes. These claims are, of course, entirely unsubstantiated.

In the age of COVID-19, such governments have the perfect excuse to call on their darker nature and have their nations more fully in their grip, the economy be damned. In fact, this seems the likely option as during the daylight hours, most aspects of daily life seem to grind on utterly unimpeded. There is little logic to the current 9 p.m. curfew especially since bars, movie theaters and indoor restaurants are all allowed to keep their doors open and are largely operating as normal. With the pandemic however, one must be incredibly careful not to overstep the mark, unless they wish to face fines, jail, or more sinister off-the-record consequences.

Now, as the West and other wealthy countries stumble around in the dark in their own vaccination campaigns, one must ask, when exactly does this end for the unlucky “other” countries of the world? Are all others simply doomed to an endless half-decade of dodging curfews, watching the development wave recede and roll back and feeling the iron hand of whichever government figure decides to come down on them for breaking a newly rolled out “rule”?

Such arguments may sound like the ramblings of a conspiracy theorist but make no mistake, this is a serious issue that needs addressing. A year into the pandemic, and many world governments have not exactly done much to shield their citizens from the vast hardships that come along with lockdowns, closures, and social distancing. It seems reasonable to bet that they will not figure it out any time soon. In some instances, it seems that the efforts can be viewed as a sort of willful ignorance. To be sure, the global healthcare system will drastically change for the better in the fallout from COVID-19, but the rate at which access to future advancements will trickle down to the developing world is unclear. It seems as though many actors chosen the more protectionist and nativist camps, abandoning the spirit of “global unity” that the NGO world likes to make bumper stickers about.

With vaccination campaigns seemingly starting in earnest (and some countries such as Israel already having vaccinated 12 per cent of the population as of 3 January 2021) one could be forgiven for rolling their eyes. This seems a familiar narrative: the vaccines are being distributed to some countries while leaving others well out of the scheme. Sure, the pandemic affects all the people of the world equally, but now that there is a solution within grasp, some people are proving to be much more equal than others. Most African nations now find themselves in the unenviable position of waiting around for the West to quit dawdling and get their act together.

The US for one seems to be stumbling from one rollout hurdle to the next, a hodgepodge of state governments interacting with federal, bad, and incompetent actors. The US vaccination effort had set a target of 20 million people having received their first injection by the end of 2020. The reality? Between three and six million, at most just thirty per cent of the number targeted. It isn’t too unreasonable to predict that the US will spend the whole of 2021 trying to grab the reins and steer the COVID-19 response back into a series of workable solutions. Even while putting the US campaign to shame, several other nations’ efforts aren’t exactly stellar either. The UK, home to arguably the world’s best healthcare system, reported issues with distribution in the latter part of 2020. All these factors slow down the efforts to get the vaccine distributed globally – if that was ever part of the plan to begin with.

In the future, it will become clear that there is some blame to be laid at the feet of East African governments as well, given their dubious relationships with foreign nations and their murky tendering procedures. In the years to come, when the many trials and errors regarding vaccine distribution in sub-Saharan Africa come to light, I’m willing to put money down that at least one country will fall drastically behind in the vaccination effort, having thrown its lot in with a questionable tender worth several hundred billion shillings, only for it to emerge that all that money went to the Sinovac vaccine made by China that only has a 50.4 per cent efficacy rate.

It is yet to be seen how exactly African state actors (and their respective publics) will react to this period of global chaos, whether they will start to move away from the neo-colonial overreach of Western governments considering their bungling of the pandemic or if the old guard will remain and carry on down this new decade. As I have mentioned in previous pieces for this publication, the pandemic has illuminated something to the youth within the United States; that all the systems that they were told to comply with were built on lies. A similar sentiment seems to be taking root within several developing countries; that the current guard isn’t really in charge of anything and that the systems need to be overhauled and made more equitable if they are to last. The vaccine buy-up by the West is just a symptom of a larger disease.