The Winter of Our Discontent: What Next After Biden Victory? 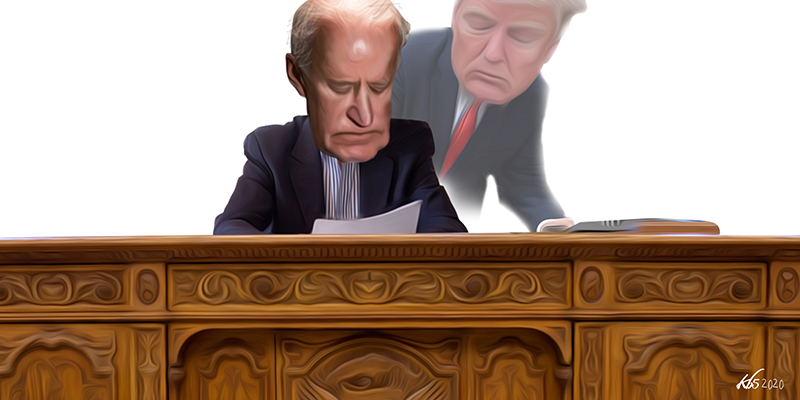 It has been more than two weeks since former Vice President Joe Biden was able to scrap and claw his way to a damaged and awkwardly narrow victory over Donald J. Trump. Despite the margins becoming clearer, the win is still ringing out hollow and empty as Trump muddies the US presidential election with claims of electoral fraud.

Biden has repeatedly come out and called for calm and reconciliation – principles of the Democratic Party that almost seem laughably archaic when viewed through the lens of Trumpism. In the bare-knuckle brawl that is modern American politics, the Democratic Party seems to have shown up wearing woolen mittens, not wanting to draw any blood from its opponent.

And what an opponent the Republican Party has proved to be! Despite everything, it managed to seemingly hold the Senate (pending crucial run-off elections in Georgia in January of 2021) and actually decreased the Democratic lead in the US House of Representatives. The big prize – the White House –  was won (due to our strangely outdated system) by a factor of 200,000 votes in four key states (Georgia, Pennsylvania, Arizona and Nevada). It was entirely within the realm of possibility that Trump would have won the electoral college and massively lost the popular vote yet again – a black mark against the strategy of the Democratic Party.

So the lingering question in the air remains: what now? For something so “certain”, a great many things seem to be up for debate. Many political insiders are wringing their hands on network TV channels over whether Trump will leave the White House at all, but this may be overblown. Unless there’s an outright electoral college coup when the electors meet to vote in mid-December of this year, Trump doesn’t’ really have much of a choice.  It looks as though he’ll have to retreat into a gilded cage of media-driven anger and of riling up supporters, never truly conceding that he lost, the bitterness clanging back and forth in his head beneath a sweaty mop of hair plugs and spray tan.

If the coronavirus response can be nothing else than a sort of a political bellwether, then this outcome is objectively the best. The response has been nothing short of a day-by-day horror show, the bar being drenched in petrol, set alight and then thrown rudely from a cliff.

Whether Trump goes willingly or not is not a concern, as it isn’t really his choice; what is of concern is what he will do with his powers in his remaining 60 days in office. The next couple of months could well be the deciding factor in the future of global power dynamics, all playing out on the whims of a petulant moron who can’t accept his own shortcomings and instead will sit on his tiny thumbs.

As has been said before, Rome wasn’t built in a day, but it was destroyed in a much shorter timeline. The incoming Biden administration will find monumental setbacks that are almost insurmountable in the age of COVID-19. Everyday, whether the stock market or unemployment figures reflect it or not, the economic reality for tens of thousands of Americans grows harsher. Moratoriums and stop gaps are expiring or have long since run their stimulus bill-guided course. All too many could be kicked out of their houses in short order. Businesses that relied on economic assistance during this bizarre period have already begun to close permanently. It is estimated that up to 40 per cent of all non-chain restaurants may never reopen their doors.

It seems far-fetched to many that any kind of brutal humanitarian crisis could ever play out in a country that is so excellent in marketing itself as the greatest nation on earth. However, many of those who believe that Americans cannot possibly experience suffering haven’t experienced the brutality of an American winter. It is hard to describe just how rough this four-month period can be for people during normal times. The temperature can fall to minus 10 degrees Celsius and remain there for two months. There can be 30 centimetres of snow in a single a night. Brutal ice storms entrench cars and encase entire buildings. All that happens during periods of normality, but this is far from normal and now global warming has made the weather patterns all the more strange and beyond accurate forecasting.

Without the benefit of foresight, the unfortunate equivalent of this coming winter seems to be that of 1932-1933. During this period, the Great Depression was in full swing, and an American President who had denied the extent of the economic damage had just been resoundingly defeated by Franklin D. Roosevelt. Herbert Hoover sat on his hands until the change of power, which led to untold deaths and poverty across the country.

Whether Trump goes willingly or not is not a concern, as it isn’t really his choice; what is of concern is what he will do with his powers in his remaining 60 days in office. The next couple of months could well be the deciding factor in the future of global power dynamics…

Trump just lost the election by the widest by an incumbent since that same election of 1932. Did he lose it by a frightfully small margin? Absolutely, but if any tea leaves can be read, had the election taken place in March 2021 instead of November 2020, he may have been electorally obliterated beyond recognition.

There is an essence of tragedy in America during this time – to have had all the power to do everything and all the misguided cheap instincts to do absolutely nothing. Both parties to date have sat back and have seemingly done nothing but bitch and snipe at one another since May of this year. Meanwhile, an entire generation has been doomed to a sort Sisyphus-style financial purgatory. As has happened in innumerable societies before it, within America, a reckoning could already be well on its way – much to the utter surprise of baby-boomer generational elites who have been calling for normalcy while padding up their retirement portfolios.

There has long been a cliff coming – an entire swathe of the younger generation with nothing to show for themselves financially, clinging on to dead-end jobs merely for the insurance as they eke out an existence while only being outwardly successful via posts on Instagram. The last several months have been a sort of rapids for them to negotiate, bouncing around corporations downsizing, fighting their way through unemployment websites that crash with regularity, racking up credit card debt to eat, then protesting for their future on weekends.

It is only so far that people can be pushed to survive. This is all without mentioning the spark to this tinder – the coronavirus pandemic itself, one that it burning out of control to an almost unfathomable degree, a continuous upwards tsunami that has never crested, and now looks to crash forth in perpetuity for the foreseeable future as the Thanksgiving holiday approaches. By mid-December, the absolute true extent of the crash will become apparent (as COVID-19 cases often take around two weeks to truly surface).

There has long been a cliff coming – an entire swathe of the younger generation with nothing to show for themselves financially, clinging on to dead-end jobs merely for the insurance as they eke out an existence while only being outwardly successful via posts on Instagram.

The medical system is already running well beyond the point of exhaustion that they ever thought to be possible. Many people, including the current administration, currently just isn’t listening. With a state of political deadlock seemingly certain, the safe bet would be to throw your money on nothing at all happening, and for such horrors to simply continue as they have. Despite the recent developments of two vaccines being rolled out, the question remains how they will be administered and distributed.

Meanwhile, Trump and his ilk have not acknowledged the incoming Biden administration, let alone started the transition process. In the last two weeks, every possible media talking head on the cable news left is screaming and hollering about norms and then turning around and being polite to complicit officials. The real human tragedies do not get mentioned: the bank accounts wiped out, the families shattered, the debts accrued, the suicides committed. It is a tired, bullshit charade that is now reaching the tentacles deeper into the lives of American homes by a rate of nearly 200,000 new COVID cases everyday.

As of November 17th, 2020, the total number of COVID cases in the US stood at over 11 million. The lines on the graph are essentially vertical and all people are burnt out on this weirdness. What the breaking point will be I cannot predict, but there certainly is no leadership or directive to correct it. Could the pandemic kill a million Americans by next April? That may be a stretch, but at the moment all things seem possible. Could more than a million people die as a direct or indirect result of the botched COVID-19 response and bungled economic assistance?

Take, for example, the incomplete patchwork facing Americans staring down the barrel of eviction notices; some will get respite, many, if not most, will not. Where will they go? Into crowded homes of distant family members or shelters with a multitude of strangers? Will they turn to robbing grocery stores? Will they languish and freeze in cities like Milwaukee, Detroit and Pittsburgh? Could there be an ugly wave of suicides, private deaths of lives that no one bothered to check in on?  Such notions of widespread systemic destitution and desperation used to be dismissed as socialistic musings; now they read as frightful premonitions. All of America’s dark underbellies have now been exposed, and the wolves are having a feast.

At least twenty million or more ugly little tales will play out this winter. These will not be necessarily deaths from COVID, but of families cast out into mourning and entire trajectories of lives forever altered. There is no rescuing many, and they’ll remain down in the cracks of society.

Such notions of widespread systemic destitution and desperation used to be dismissed as socialistic musings; now they read as frightful premonitions. All of America’s dark underbellies have now been exposed, and the wolves are having a feast.

In random states that are flown over and exploited for votes (places like my home state of Wisconsin), such situations are already in a full-blown tailspin. Despite Wisconsin only having a population of around five million, it has numbered in the top 10 states for new COVID cases for several consecutive weeks. This was already occurring when Trump held a large campaign rally on October 30th in the city of Green Bay just ahead of election day. It is that action of callously adding fuel to the fire that has raised eyebrows the highest. It is one thing to largely ignore a crisis, as the current government has done, it is another altogether to actively help the situation to deteriorate in states without large-scale public health capabilities. Make no mistake, this period will be referred to in textbooks as the “The Dark American Winter”. The only question is just how bleak it will become before the spring.

While many in the West are looking at the current state of the US teetering and gasping with shock and horror, most in East Africa simply shrug, knowing they are one bad leader away from reaching the same precipice. Maybe next time the US will listen. But holding one’s breath is not recommended.