The Search for a Puppet Chief Justice 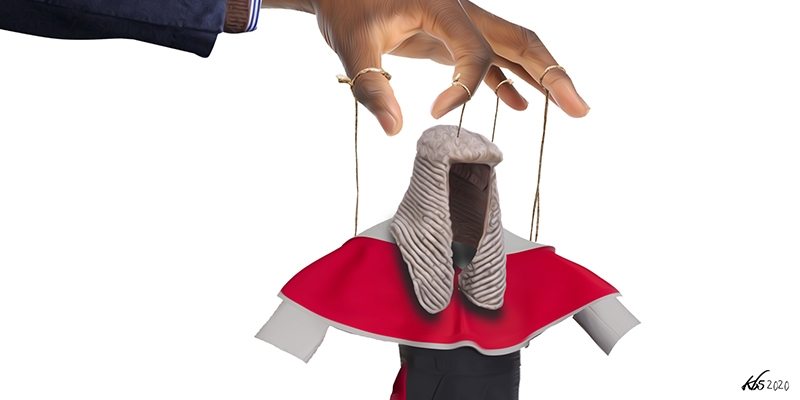 Anxiety over who will replace Chief Justice David Maraga exploded into the public domain on Friday, October 16, 2020, when a member of the Judicial Service Commission (JSC) alleged a plot to delay the recruitment process. Macharia Njeru, one of the two representatives of the Law Society of Kenya (LSK) to the JSC, claimed in a public statement that the Chief Justice and a few others were “hellbent on derailing the orderly recruitment of his successor and leaving the institution of the Judiciary in a crisis of leadership”.

LSK immediately dissociated itself from Macharia’s position and asserted that the “state capture of the Judiciary and the Judicial Service Commission would not be executed through its representatives”.

The parliamentary Justice and Legal Affairs Committee had earlier failed to prevail on Justice Maraga to take early terminal leave, and subsequently published a proposal to change the law on when to begin recruitment of a new Chief Justice. The Chief Justice will officially retire on January 12, 2021, when he turns 70, but he is expected to take leave on December 15, 2020.

Powerful individuals in the country’s politics cannot wait to see Justice Maraga’s back because of his surprising show of spine. On September 1, 2017, the mild-mannered and soft-spoken jurist led a four-judge majority of the Supreme Court to annul the presidential election in a decision that reverberated across the globe. Last month, Justice Maraga advised the President to dissolve Parliament for failing enact laws to increase representation of women in national elected leadership on the strength of a High Court declaration and six petitions.

Between the two monumental decisions, the Chief Justice has called out the President over judiciary budget cuts, disregard for court orders and verbal attacks on the institution he leads.

Justice Maraga’s name conjures up odium and foreboding in state organs at the executive and legislative levels, expressed through punitive budget cuts in the Judiciary, disregard of courts’ authority, and derisive rhetoric. None of these backhanded actions have brought the politically powerful any satisfaction, hence the abiding desire to find a more user-friendly Chief Justice.

Vacancies in the Judiciary can only be advertised fourteen days after they open up, according to the law, which means that the Chief Justice, who also chairs the JSC, plays no role in recruiting his successor. Previously, individuals in the presidency unsuccessfully sought to influence who becomes Chief Justice since the Constitution of Kenya, on its promulgation in 2010, retired Justice Evan Gicheru in February 2011. At the time, President Mwai Kibaki nominated the Court of Appeal’s Justice Alnashir Visram for Chief Justice without inviting applications or conducting interviews. He was countermanded by the newly-constituted JSC, which then conducted one of the most brutal public interviews for the position before choosing civil society icon and law scholar Willy Mutunga.

Justice Maraga’s name conjures up odium and foreboding in state organs at the executive and legislative levels, expressed through punitive budget cuts in the Judiciary, disregard of courts’ authority, and derisive rhetoric.

Dr Mutunga’s transparent recruitment freed him from the usual baggage that would accompany a political appointment to lead the transformation of the judiciary into an independent, publicly accountable institution [Full disclosure: I was communication advisor in the Office of the Chief Justice from 2011 to 2015]. By the time Dr Mutunga chose to retire a year early in June 2016, he had trebled the number of judges to increase efficiency, built confidence and secured the highest funding ever for the institution. He also ring-fenced decisional independence that would enable courts to act as a check on executive and legislative power.

After the Supreme Court upheld the 2013 presidential election, an internal corruption investigation in the Judiciary sucked the institution into a confrontation with the National Assembly, which petitioned the President to appoint a tribunal to investigate six members of the JSC. A five-judge High Court bench neutered the tribunal before it could sit and presented the first contest between Dr Mutunga and President Uhuru Kenyatta.

President Kenyatta would play possum with a list of 25 judge nominees presented to him by the JSC, first appointing 11 and then keeping the other 14 in abeyance for a year. An amendment to the law to require the JSC to send the President three names from which he could choose the Chief Justice was struck down on account of unconstitutionality.

When Dr Mutunga wanted to retire, the President declined to meet him, and the Speaker of the National Assembly refused to respond to his request to address Parliament. By the time interviews for Dr Mutunga’s replacement began in September 2016, the Executive was disoriented and unable to muscle its substantial vote strength in the JSC for a single candidate.

Although the presidency nominates two non-lawyers as members of the JSC in addition to the Attorney General and a nominee of the Public Service Commission, thus controlling 36 per cent of the vote, the Judiciary has five members – the Chief Justice as chair and one representative each for the Supreme Court, the Court of Appeal, the High Court and the magistrates – and has 45 per cent voice. The Law Society of Kenya’s two representatives – 18 per cent – provide an important swing vote for the Executive or the Judiciary whenever there is no consensus.

When Dr Mutunga wanted to retire, the President declined to meet him, and the Speaker of the National Assembly refused to respond to his request to address Parliament.

The Supreme Court’s annulment of the presidential election in September 2017 produced voluble complaints from President Kenyatta, who threatened unspecified action against the Judiciary. The independence of the Judiciary, represented in the person of the Chief Justice, has clearly rankled President Kenyatta and his supporters. He subsequently began a systematic reorganisation of the Executive’s representatives to the JSC by picking a judiciary insider, Court of Appeal president, Kihara Kariuki, to replace Attorney General Githu Muigai. Even before the terms of public representatives Winnie Guchu and Kipng’etich Bett were midway, he recalled them and replaced them with Prof Olive Mugenda and Felix Koskey. And then he declined to gazette the re-election of Mohammed Warsame as Court of Appeal representative to the JSC. Judge Warsame was finally seated without re-taking oath courtesy of a court decision that obviated the need for his election to be gazetted. He joined the judiciary column led by the Chief Justice, Deputy Chief Justice Philomena Mwilu, who had been elected to represent the Supreme Court, and Justice David Majanja, who represents the High Court.

Fears have been rife that the election of the magistrates’ representative to replace Chief Magistrate Emily Ominde in December and the replacement of LSK woman representative Mercy Deche could provide an opportunity for the Executive to support pliant candidates, in addition to Macharia Njeru.

It is likely that urgent attempts to start the Chief Justice’s recruitment could exclude the two representatives of the magistrates and the LSK, thus denying the panel two critical voices. Voting strength in the JSC could also be significantly altered if some of the commissioners apply for the Chief Justice’s position. For one, it is not clear if the 62-year-old Deputy Chief Justice Philomena Mwilu, who already represents the Supreme Court in the JSC, will act as chairperson of the commission once Justice Maraga leaves.

Although voting is an important factor in choosing the next Chief Justice, qualification is probably more important. And the public scrutiny candidates are subjected to, complete with court oversight when required, means that a naked attempt to install a puppet would backfire.

The law only provides for the Deputy Chief Justice to act as Chief Justice “[i]n the event of the removal, resignation or death” and only for a period not exceeding six months pending the appointment of a new one. It remains to be seen if legal experts will argue that retirement is not equivalent to removal, resignation or death. Should Justice Mwilu also throw her hat in the ring for the top job, she would not be able to cast a vote as a JSC member.

Another JSC member who has to weigh between voting and chasing the job is 66-year-old Justice Kihara Kariuki, believed to be a front-runner to succeed Chief Justice Evan Gicheru in 2011 but has bided his time, rising to President of the Court of Appeal before accepting to serve as Attorney General. Meanwhile, Justice Mwilu has been embroiled in petitions seeking her removal from office since the Supreme Court annulled the presidential election. Two years ago, the Director of Public Prosecutions and the Director of Criminal Investigations launched a highly publicised effort to arrest and charge her with corruption before the High Court discharged her and advised that complaints against her be first have been processed through the JSC. Justice Mwilu has since tied the JSC in legal knots over the involvement of the Attorney General and one other member in hearing the complaint against her, claiming that they have shown bias.

Although the Constitution allows a Chief Justice to serve for a maximum of 10 years, the practice so far has been to choose individuals who are close to the retirement age, with the effect that those chosen preside over only presidential petitions from one election cycle before they reach the retirement age of 70. If appointments continue to be short-term to limit the pain individuals can inflict on the institution, candidates in their mid-60s appear to be chosen to navigate the 2022 election and leave before the 2027 one.

Although voting is an important factor in choosing the next Chief Justice, qualification is probably more important. And the public scrutiny candidates are subjected to, complete with court oversight when required, means that a naked attempt to install a puppet would backfire.

Although the Supreme Court’s Justice Smokin Wanjala gave a good showing at the 2016 interviews and was ranked second, his age – 60 – means that if appointed, he would hold the job for 10 years. Law scholar Makau Mutua, 62, who was ranked third in the 2016 interviews for Chief Justice, could also give the job another try, as would former Attorney General Githu Muigai, who would similarly be hampered by fears of serving out the 10 years in the post.

The Executive’s frustration with the Judiciary has been expressed as blame for the slow pace of corruption cases, where the courts are criticised for not pulling their weight to deliver quick convictions. The most evident sign of frustration has been the President’s refusal to appoint 41 individuals nominated by the JSC as Court of Appeal and High Court judges. The law does not permit the JSC to reconsider its nominees after the names have been submitted to the President, except in the case of death, incapacity or withdrawal of a nominee. Last week, judge designate Harrison Okeche died after a road traffic accident before he could be sworn in because the President has not published the names as expected. It remains to be seen how the JSC responds.

Chief Justices chair the Judicial Service Commission, and preside over the Supreme Court, which decides the presidential election petitions. Besides the very constrained and collegial power in these two sites, the Chief Justice also exercises administrative power in empanelling High Court benches for constitutional references, and posts judges – powers shared with the President of the Court of Appeal and the Presiding Judge of the High Court.

A Chief Justice cannot direct judicial officers – from the lowliest magistrate to the Supreme Court judge – on how to decide a matter. Much of the power she or he wields is moral and symbolic. The emotional energy invested in controlling the recruitment of the next Chief Justice could turn out to be a source of great frustration when administrative fiat and bench-fixing do not deliver the anticipated results for those seeking a puppet Chief Justice.